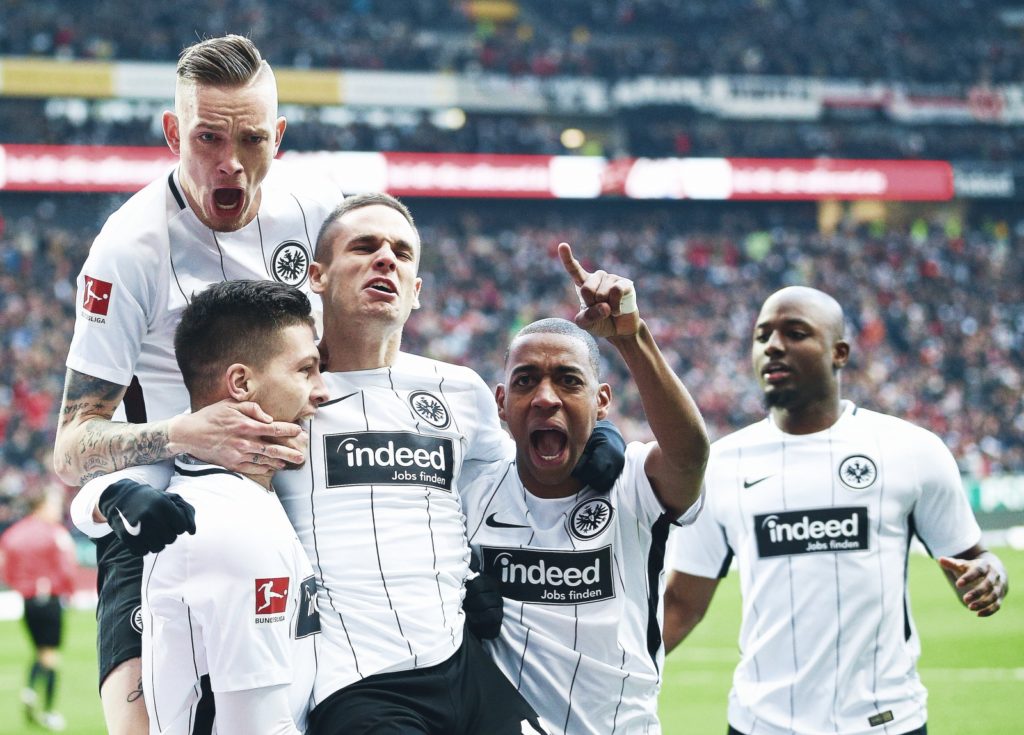 When Ben Manga became chief scout of Eintracht Frankfurt in July 2016, the club had just finished 16th in the Bundesliga, only staying up thanks to their victory over 1. FC Nürnberg in the relegation playoffs. They exited early in the DFB Pokal second round, and they desperately needed someone to turn them around. Thanks to Manga, they’ve quickly become one of the most thrilling underdog sides in Europe.

In 2016, they brought in promising young talents such as Marius Wolf, Ante Rebić and Guillermo Varela, and they bounced back in form under current Bayern manager Niko Kovač, finishing 11th. However, they succumbed to Borussia Dortmund in the DFB-Pokal Final, with Ousmane Dembélé and Pierre-Emerick Aubameyang combining to lead BVB to victory.

It’s been smooth sailing since that agonizing defeat. In the summer of 2017, Manga went about bringing in four 23-year-olds who would go on to be key players for Die Adler: Sébastien Haller from Utrecht, Jetro Willems from PSV, Danny da Costa from Bayer Leverkusen, and Carlos Salcedo from Chivas.

Haller replaced Haris Seferović, who left that summer on a free transfer to Benfica. Seferović is currently the top scorer of Portugal’s Primeira Liga, although Haller has had just as good of a season at Eintracht.

Willems, on the other hand, arrived to replace Bastian Oczipka, who went on to be one of the signings of the summer in Domenico Tedesco’s debut season at Schalke. He has since been eclipsed in the pecking order by Filip Kostić, who arrived from Hamburg on loan this past summer after a promising display for Serbia in the 2018 World Cup.

Furthermore, Manga brought in veterans such as Kevin-Prince Boateng from Las Palmas and Jonathan de Guzmán on free transfers. The result? Eintracht went on to finish 8th in the league and defeated Bayern Munich in the DFB-Pokal Final.

Several key parts of that Eintracht side left this summer, including cult hero striker Alexander Meier and Kovač, who arrived at Bayern to replace the semi-retiring Jupp Heynckes as manager. However, they rebuilt excellently, and their upward rise has continued. While Kovač is a risk-averse, conservative manager, as Bayern fans have become painfully aware this season, the low-profile replacement of Adi Hütter has seen them take another step in the right direction.

With Eintracht struggling defensively early on in his term, Hütter reverted from a back four to a back five, which Kovač had previously used before leaving for Bayern.

Coincidentally, Eintracht used a back five for their first game of the season, the DFL-Supercup against Bayern, but after being thrashed 5-0, they went to a back four. However, after their 1-3 loss to Borussia Mönchengladbach on September 26, they permanently retreated back to the back five, and they haven’t looked back.

This newfound defensive balance has been crucial for Eintracht. With da Costa as the right wing back protecting the right side with his defensively assured performances, Kostić, a traditional winger, has the ability to push up on the left, penetrating the space afforded to him. When Kostić pushes up, the left-sided center back, Evan N’Dicka, moves to a makeshift left back position so as to protect the left flank in defensive transition and allow Kostić to push the rival right back deeper.

With an aggressive press, Eintracht seek to prevent their opponent from playing out from the back and aim to win back possession in the final third. We often see the two central midfielders (usually captain Makoto Hasebe and Sebastian Rode) guarding the opposition midfielders, whereas the two central forwards seek to prevent the defenders from switching play of slowly playing out of the back.

One of the biggest perks of Eintracht’s squad is its tactical versatility, with Hütter switching between a 3-5-2 and a 3-4-1-2. Rebić can play either behind the two strikers or as a second striker, Hasebe can play as a stopper in defense a la David Luiz or as a defensive midfielder, and new arrival Almamy Touré is versed at playing as a wing-back and a right back, although his best position seems to be on the right of a back three. Just like Nordi Mukiele and Benjamin Pavard, both of which developed in France before moving to Germany, Almamy’s attributes best suit him to the role César Azpilicueta played for Antonio Conte’s Chelsea, or the role Kyle Walker played for Gareth Southgate’s England last summer.

Today, Eintracht are 5th in the Bundesliga, just three points off 4th-place Borussia Mönchengladbach. In addition, they’re the only undefeated team in the Europa League alongside Villarreal, and the only team to win every group stage match alongside Red Bull Salzburg. After an impressive stalemate at home against Inter, they have a great chance to advance to the quarterfinals for the first time since 1995.

Eintracht have managed such an impressive rise thanks to the unique transfer patterns and strategies set in place by Manga and sporting director Fredi Bobic.

One of their strategies is to find promising strikers who are struggling for minutes at Portugal’s big three (Porto, Benfica, and Sporting), and sign them at cut-rate prices.

In the summer of 2017, they paid €200k for a loan deal for Benfica’s Luka Jović with a €7 million option to buy. The following summer, they bought Porto’s Gonçalo Paciência for £2.7 million.

Jović has since become one of the hottest talents in Europe this season, tied with Bayern’s Robert Lewandowski as the top scorer in Bundesliga this season, while being the 3rd-top scorer in the Europa League. In total, Jović has registered 21 goals and 7 assists in 33 appearances this season, translating into an average rate of a goal or an assist every 73 minutes.

Despite losing four starters last summer this past summer (two on free transfers) as well as their manager, Eintracht have taken a step forward this season, and it’s thanks in large part to Jović’s breakthrough. Jović had failed to get the game-time he needed for his development with Raúl Jiménez, Jonas and Kostas Mitroglou ahead of him in the pecking order, and with Seferović set to join in the summer, it wasn’t going to get any easier. Jović left on loan with an option to make it permanent. He flourished in his first season, scoring 9 goals in 26 appearances and earning a call-up to Serbia’s World Cup squad.

Knowing that Jović would become hot property once the buyout clause became valid the following summer, Eintracht snapped up Paciência, who had risen through Porto’s youth ranks yet failed to make an impact for the first team, stuck behind Tiquinho Soares, Vincent Aboubakar and Moussa Marega in the starting line-up.

However, it’s likely that Paciência isn’t the future replacement for Jović, but Haller. Whereas Jović has thrived playing off the French target man, peeling off defenders, dribbling at pace and picking out players such as Rebić and Kostić with expert through balls, Haller has been in charge of holding up possession and creating space for Jović.

Paciência is a technical striker who tends to drop deep into attacking build-up and create space for other forwards, holding up the ball and dragging defenders out of position. With physicality, technique and intelligent, he isn’t the finished deal yet, but neither was Jović, and Eintracht are using the same formula they used for Jović to find the future replacement for Haller.

Eintracht have located specific hubs of talent for specific positions, and they’ve used it to their advantage in establishing a clear-cut scouting strategy. They bought N’Dicka and Haller, both of which developed at Auxerre’s famed academy, although Haller went to Holland to refine his skills whereas N’Dicka left directly from Auxerre last summer. Auxerre has produced the likes of Éric Cantona and Bacary Sagna, as well as the likes of Soualiho Meïté and Willy Boly in recent years.

That isn’t the only common scouting source Eintracht have employed, though. In Mexico, they’ve used Chivas to find Marco Fabián and Carlos Salcedo, both of which became starters for Eintracht before leaving in January. The latter started as Mexico defeated Germany in their first group stage match of the World Cup, whereas the former remained on the bench.

Chivas is often considered to have one of the best academies in Mexico along with Pachuca. Eredivisie league leaders PSV Eindhoven have used Pachuca’s academy to their benefit, signing Hirving Lozano and Érick Gutiérrez under the guidance of former sporting director Marcel Brands and current director John de Jong.

These specific scouting hubs span the globe. Whereas they’ve looked at Auxerre’s academy in France, in Spain, they’ve focused on Real Madrid Castilla’s talents. Castilla’s youngsters are known for being defensively sound, physically imposing, and positionally aware, and while they may not get the credit that Barcelona’s La Masia does, their success rate speaks for itself.

In previous generations, Juanfran, Nacho Fernández, José Luis Caminero, Dani Carvajal and Chendo have all passed through Castilla’s ranks, and the flow of defensive talent hasn’t stopped. Achraf Hakimi, Mario Hermoso, Sergio Reguilón and Marcos Llorente are the latest vein of talent to come through Castilla, with the skills to play across defense or in defensive midfield.

Eintracht have tapped into the latest vein of talent, signing defensive midfielder Omar Mascarell, then 23, from Real Madrid in the summer of 2017. Mascarell played a vital role for Eintracht under Kovač before Madrid exercised their €4 million buyback clause and subsequently sold him to Schalke for €10 million. The Mascarell replacement for Eintracht? Lucas Torró, 23, a defensive midfielder who had spent four years developing at Real Madrid’s B team. While Eintracht bought Torró from Osasuna, Madrid retained a 50% sell-on clause.

In 2016, with starting goalkeeper Kevin Trapp leaving to PSG, Eintracht bought 25-year-old Lukáš Hrádecký from Danish club Brøndby. Hrádecký quickly became one of the best goalkeepers in Germany before leaving on a free transfer this past summer to Bayer Leverkusen. When he left, Eintracht went out and bought 25-year-old goalkeeper Frederik Rönnow from Brøndby at a similar price. To ease the pressure off him and slowly adjust him through the ranks, they also brought Trapp back on loan, who found opportunities limited with PSG signing Gianluigi Buffon on a free.

Rønnow has replaced Hrádecký three times during his career: at Esbjerg FB, at Brøndby IF, and at Eintracht. Eintracht seek to renew Trapp’s loan and sign him on a free transfer when his contract expires in 2020, but if not, they’ll be hoping Rønnow can reach the same heights as their last goalkeeper from Brøndby.

Thanks to a clear-cut transfer strategy and consistently top-notch scouting in common talent hubs, Eintracht Frankfurt are punching above their weight both in Germany and Europe.