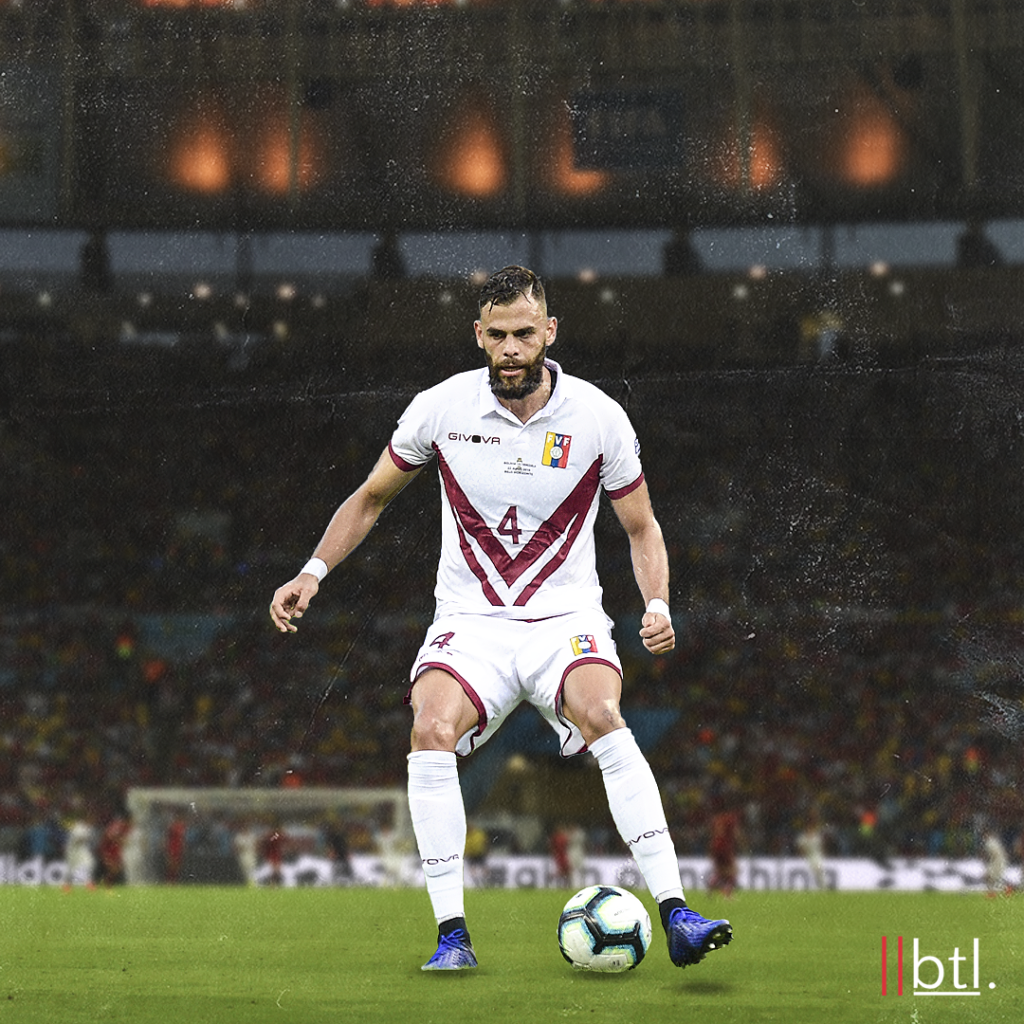 By the time Jhon Chancellor was called up for Venezuela’s 2019 Copa America squad, a call up largely expected having played a roll in numerous matches since the last burst of World Cup 2018 Qualifiers, the center back had had what can only be described as a purely tumultuous 365 days of professional football.

To understand why his transfer to recently-promoted Brescia Calcio, now in Serie A, was a conclusion to a journey so unexpectedly positive that it left Venezuelan football media filled with joy, we need to go back to the first day of 2017.

By January 1st, 2017, just a day before Chancellor’s 25th birthday, the Venezuelan had a six year professional career within the Venezuelan First Division. Long stints at Mineros de Guayana and Deportivo Lara were complimented by a brief loan with Deportivo La Guaira, leaving Chancellor with over 100 appearances in Liga Futve and 12 league goals, often due to his height of 6’6.

January 1st would bring a new stage to Chancellor’s career, however, as he would be sold by Mineros to Delfín, a historical club in the Ecuadorian first division, or Serie A. Chancellor would be part of a Delfín squad that came one final away from winning the Serie A title, if not for a 6-2 aggregate loss to Emelec, who became champions instead.

Chancellor accumulated 38 appearances for Delfín in 2017, scoring a three goals along the way and establishing himself as a rising star for Venezuela’s center back arsenal, at that time still headlined by the likes of Oswaldo Vizacarrondo, José Velazquez, and the-still active Wilker Ángel.

The positive burst of action in Ecuador, however, would be just the beginning of a the Venezuelan’s journey through the club-level of the game.

Exactly one year after leaving for Ecuador, a new club agreed terms with Chancellor. This time, however, he would not be moving up the ladder of South America’s premier divisions. Instead, he’d be off to the Republic of Dagestan, a federal subject and portion of the Russian Federation. That club, Anzhi Makhachkala, would give Chancellor his first taste of European football, but also two of the hardest seasons he’d ever take part in.

The move, on the first day of 2018, would plant Chancellor in Makhachkala, the capital of Dagestan, toward the end of a difficult season that had left Anzhi in the midst of a relegation battle. The center back would spend the first four games of his stay as an unused substitute, finally earning a start on April 4th against Spartak Moscow. Thrown into the fire against one of the league’s top sides, Anzhi lost the match 4-1. An injury would lead Chancellor to missing the rest of the season, which included five league matches, all losses, and two relegation playoffs.

Anzhi lost the playoff 4-6 on aggregate, leaving them set to join the second division for the 18-19 season. This is all to say, it seemed that Chancellor’s European adventure was headed to rock bottom before it had really even started. That was until FC Tosno, a fellow Russian Premier League club that had finished just above the relegation playoff spot and won the domestic cup that season, folded.

With a club missing from the RPL, Anzhi were allowed the opportunity to return to the league to replace Tosno, an opportunity they welcomed.

With another chance in the RPL at hand, Chancellor joined Anzhi in the 2018-2019 season as a regular in the starting XI. He was joined by fellow Venezuelan and Vinotinto player Andrés Ponce, who would be one of the club’s more successful attackers that season before leaving the next summer. Chancellor played 14 of Anzhi’s 17 games in the first half of the season, prior to the RPL’s extensive winter break. Those 14 matches didn’t go much better for the club than last season’s had. Anzhi ended the period with a 4-3-10 WDL record and well into a relegation battle.

Chancellor missed the club’s worst result, a 4-0 drubbing by Krasnodar, and in total missed two of the club’s losses and one draw. Chancellor did play a role in a brief Russian Cup run for the club, scoring in a 2-1 win over Chaika Peschanokopskoe before losing 1-0 to Spartak Moscow in the next round. He played the full 180 of the two matches.

By the time winter arrived, results on the pitch showed Chancellor as a relatively reliable player within a squad that simply had issues at every position. If things were to go well and the club were to survive relegation, most assumed that it would include a continued period of strong defending from the Venezuelan. Then he left.

Anzhi Makhachkala, it would turn out, were collapsing faster financially than they were on the RPL’s table. The club had been rolling down the path of financial ruin since a golden period less than ten years earlier ended with the club selling its best players, including the likes of Samuel Eto’o, and now rumors surfaced that players were not even being paid consistently.

In an article for Pundit Feed, written by Jordan Florit, David Sansun, the editor for Russian Football News, simplified the situation Anzhi faced in its final season. “There’s been support for them from the Russian Football Union, other clubs, and, primarily, former players, domestic and foreign,” Sansun explained. “I don’t think anyone really wants to see the club fold, but at the same time no-one’s really doing anything about it.”

Chancellor would leave the club, who eventually suffered relegation that season, and moved to yet another continent, Asia. His new home would be Qatar’s oldest club, established in 1950, Al Ahli Sports Club. The move was met immediately by some skepticism, with a move to Asia seeming to cut down the muddled progress the defender had made while making ends meet in Russia.

Chancellor would arrive in time for the final seven matches of the Qatar Star League’s 2018-19 season. The Venezuelan’s debut would be his best showing, scoring in a 2-1 win over Al Kharitiyat. The club, struggling to climb out of the middle of the table and into the league’s top spots, would then go on a run of poor results, drawing twice and losing three times, including a 6-0 loss to the eventual second place club, Al Duhail. Al Ahli would earn one more win after Chancellor’s debut, but would finish fifth, three points out of Qatar’s lowest AFC Champions League place, a spot in the playoff rounds.

It would not be the center back’s most prestigious run of form, but yet again an important run of play and resume building. With the end of the Qatari season, it was hard to avoid the feeling that the murmurs had been right and Chancellor’s transfer had been wrong.

With his 18/19 season finally over, Chancellor had one more major event to look to before truly ending his playing year; the 2019 Copa America.

Chancellor already had eleven caps for Venezuela when he was called up for the Copa America squad, matching the caps of the younger players, like Wuilker Fariñez and Ronald Hernandez, but an age (27) closer to that of la Vinotinto’s veterans, like Roberto Rosales, Salomón Rondón, and Tomas Rincón.

Chancellor would play three of Venezuela’s four matches, missing the 0-0 draw with Brazil due to squad rotation, the two spots given instead given to Yordan Osorio and Mikel Villanueva, Porto and Málaga players respectively at the time. He played the full 90 minutes, however in the 0-0 draw with Peru, the 3-1 win over Bolivia, and the 2-0 loss to Argentina. Chancellor was credited as one of the better defenders from those three results, even in la Vinotinto’s loss to Messi’s Argentina.

Helping his nation to the quarter finals of the competition on his first run of Copa America appearances of all time, Chancellor provided a more positive burst of entries into his resume, playing and holding his own against South America’s best despite a rough two seasons of club play.

Those positive performances, it would turn out, would garner the attention of a recently promoted club in one of the world’s top leagues, Brescia of Serie A. The club took interest in the player following his Copa America performances, with both Sky Sports Italia and Football Italia reporting that Brescia President Massimo Cellino took interesting in Chancellor specifically due to his national team run in the summer.

The 18/19 Serie B champions would become the second holder of a Venezuelan player for the 19/20 season, joined by Torino and Tomas Rincón. Udinese previously held Darwin Machis under contract before selling him in the summer of 2019 to Granada. Other Venezuelan’s in Serie A have included Josef Martinez with Torino from 2014 to 2017, Adalberto Peñaranda with Udinese from 2016 to 2017, and Aristóteles Romero for Crotone.

Chancellor joined the club for a fee of 1.82 million dollars, paid to Al Ahli, and immediately began fighting for his place in the first team by starting and scoring in a friendly against Serie D side Ciliverghe Mazzano. He has since appeared on and off in the club’s preseason, not starting in their friendly against Renate of Serie C but featuring for the last 26 minutes in Brescia’s recent match against Besiktas. Whether Chancellor will be a constant in the 2019/2020 Serie A season is yet to be clear.

The move in general marks a drastic shift in Chancellor’s career and a surprise payoff for the center back’s years of work around South America, Europe, and Asia. Developed in the Venezuelan first division, Chancellor has found a home unimaginable in the eyes of a defender struggling to keep a crumbling club afloat in Russia or making ends meet with a winter move to Qatar.

While the move of Salomón Rondón to China and Josef Martinez’ remaining status in MLS take up most of the chatter on how Venezuelans find or don’t find their place in Europe, the 6’6 Chancellor has proven to become one of two Vinotinto defenders currently in Europe’s top five leagues, joined by Roberto Rosales who recently moved to Leganés after spending last season on loan at Espanyol. While others have drawn all the eyes, it is Chancellor who will likely end the summer of 2019 with one of the biggest moves of the 2019 Copa America squad.