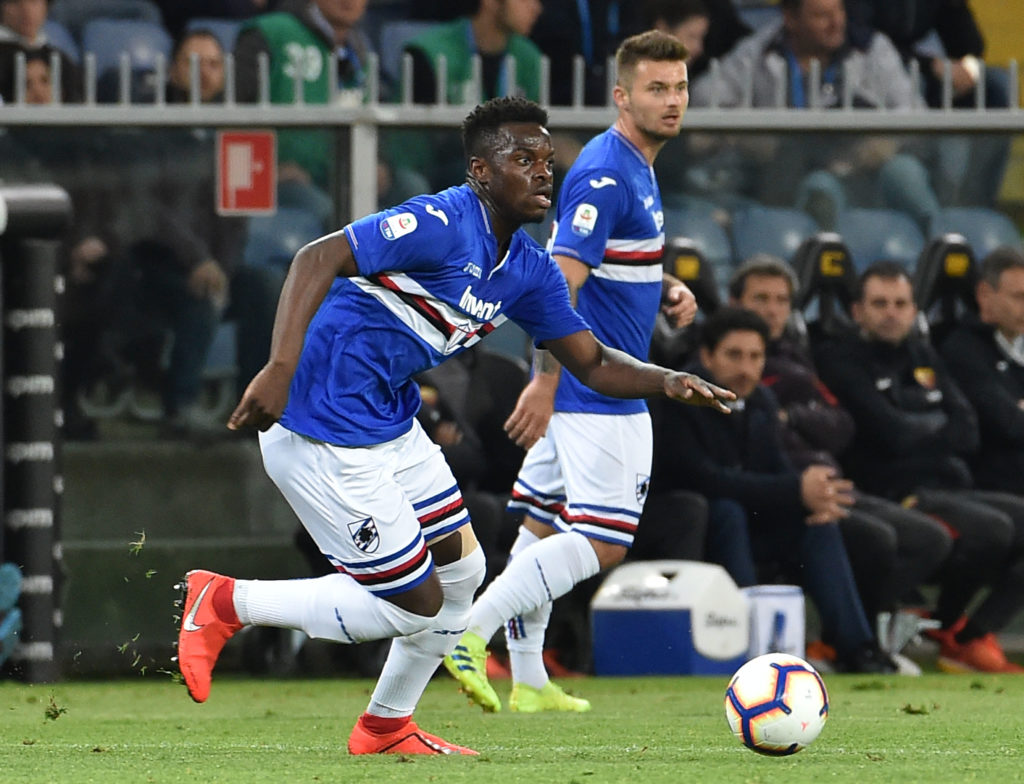 Buying and selling players has been a major part of Sampdoria’s modus operandi in the 2010s and when defensive midfielder Lucas Torreira was sold to English club Arsenal for a reported figure of €30 million in the summer of 2018, the Blucerchiati searched in England for his replacement.

Ronaldo Vieira was acquired from Leeds United that summer for around €7.1 million but he was not able to establish himself under former Samp tactician Marco Giampaolo, who preferred experienced Swede Albin Ekdal in the central midfield role.

Now with Eusebio Di Francesco as coach, he brings in a new style of play as well as a different tactical approach to his predecessor and this might provide the English youth international with a great opportunity to demonstrate his ability in Italian football.

Life at the Genoese club has not been easy for Vieira as he tries to adapt to living in another country and a style of football that is dissimilar to what he is used to. Limited playing time under Giampaolo halted any progress he could have made as he played just 14 times during the 2018/19 Serie A campaign.

The now-AC Milan coach preferred the aforementioned Ekdal, who he coached at Siena in the early stages of the 2009/10 season. Not only he did he boast greater Serie A experience, the Swedish international was a more convenient fit for the Swiss-born tacticians intricate passing game with his languid movement, calm head, and simple yet effective distribution.

Vieira had earned significant playing time while he was at Leeds, featuring in 38 competitive matches in 2016/17 and 32 in the following season. Going from the second tier of English football to a club in Italy’s top flight was not going to be an easy leap.

Now with one season under his belt, he has familiarized himself with the Italian game and might be utilized more under Di Francesco. If Giampaolo encouraged backward and horizontal passing in addition to making diagonal and vertical passes, the new Doriani tactician will likely encourage a quicker and more direct passing game than his predecessor and this might suit the Guinea-Bissau-born starlet.

With Belgian international Dennis Praet leaving for English club Leicester City, Vieira has a great opportunity to fill the void left by the 25-year-old. Not only is the English starlet confident in his own abilities but he reveals that he already prefers the new coach more than the previous one.

“I want to play, I will get the place of Praet, and also his house,” Vieira told Il Secolo XIX on August 15. “Giampaolo’s silence was strange to me, now Di Francesco talks to everyone. [Playing as a] playmaker or mezzala is the same; I like being able to assert myself and try to score a few goals.”

The 21-year-old has already started in Sampdoria’s first two competitive fixtures in the 2019/20 campaign and played for the whole duration in each one; the 3-1 victory away to Crotone in the Third Round of the Coppa Italia and the 3-0 defeat against Lazio in the opening match of the Serie A season.

In the cup fixture, Vieira started in his natural position in central midfield and he was flanked by Jakub Jankto and Karol Linetty. The highlight for the Guinea-Bissau-born midfielder was when he provided an assist against the Squali when the Blucerchiati were 1-0 down and he hit a long-pass from his own half to Gianluca Caprari on the left-wing, who sprinted into the box and side-footed a shot past Pitagorici goalkeeper Alex Cordaz.

From being employed in his natural role, he had to change positions for the match against Lazio so Di Francesco could accommodate Ekdal in the midfield. The Swede was selected to play as the regista – or midfield director – while Vieira was forced to play as a box-to-box midfielder like Linetty.

Prior to the match against the Biancocelesti, Di Francesco confirmed that he would play Ekdal and Vieira simultaneously in some games throughout the 2019/20 season and this would involve the English youngster playing on one side of a midfield trio.

“You will surely see him together with Ekdal sometimes,” the Samp tactician said in his press conference on August 24. “He has the characteristics to play as a mezzala and a playmaker and I like these versatile players a lot.

It was not the most accomplished performance from the English youth player but he did make an effort and many of his Sampdoria teammates underperformed. He also had a couple of chances to score when his shot in the first half was saved by Aquile goalkeeper Thomas Strakosha and he had a long-range shot which flew just over the bar near the end of the second.

Lazio has been a bogey side for the Blucerchiati and they have not beaten the club from Italy’s capital since defeating it 2-1 at home in April 2016. Il Doria will travel away to Sassuolo for their next league fixture and it will be intriguing if Di Francesco starts Vieira and Ekdal simultaneously. The Biancocelesti are one of the strongest teams in Serie A while the Neroverdi might pose less problems for the club from Liguria.

If Vieira can cement a place in the Sampdoria XI under Di Francesco, he possesses the attributes to be another one of the Doriani’s breakthrough stars.