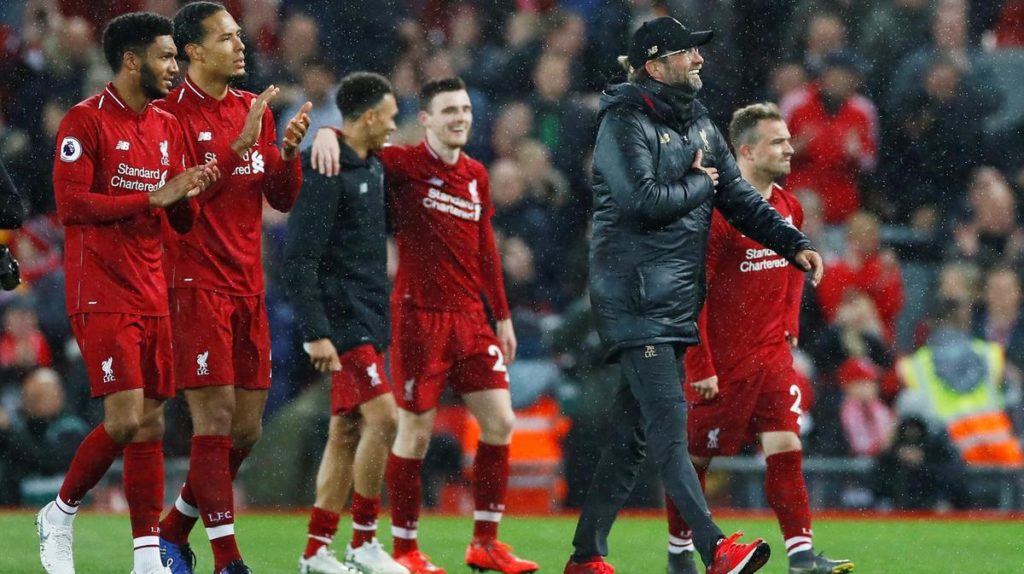 ZL: Do you have any concerns going into today’s match?

SM: Lionel Messi is always a concern and teams have to be wary of Luis Suarez, Philippe Coutinho and Ousmane Dembélé. But I’m not as concerned as I thought I would be. Barcelona’s weaknesses are Liverpool’s strengths. We’ve shown a maturity to our game this season and performed in Europe away from home, albeit after a horror show in the group stage.

ZL: What do you mean when you say Barcelona’s weaknesses are Liverpool’s strengths?

SM: I suppose it very much depends on the way you look at it. Barcelona play football the proper way. They look to dominate possession, they press, not as much as the Guardiola days but the desire to win the ball back as quickly as possible is there. Their full-backs push on, their defensive line is high. In isolation they’re all positives and considered to be strengths but against Liverpool those very traits could be their downfall.

As flagged by @el_mansfield, Liverpool have beaten three of the top five possession based teams this season in terms of average spent on the ball per match. They defeated PSG, Chelsea and Bayern Munich. The other team outside of that top five beyond Barcelona was Manchester City who had to tweak their usual style and ended up ceding more possession than usual to combat us. I can’t see Barca adopting a similar approach, especially not at home.

ZL: Do you expect Valverde opting for a more defensive approach today?

SM: He’ll be more conservative than previous Barcelona managers would have been but I can’t see him letting Liverpool dictate the play and dominate the ball. There’s an expectation when you’re Barcelona and showing too much respect to Liverpool would be a sign of weakness.

ZL: What are you expecting for Liverpool’s midfield today?

SM: This is the big talking point. Klopp tends to go with his tried and tested trio of Jordan Henderson, James Milner and Gini Wijnaldum in these games but that three struggled in away games against Napoli, PSG and Red Star.

He may opt for them against the La Liga champions due to their work off of the ball and their ability to cover the full-backs, something that will probably be important tonight. But if I was Klopp, I’d look to get Naby Keïta into that midfield. The only midfielder other than Alex Oxlade-Chamberlain who can carry the ball and break the lines against a pressing team.

ZL: What’s one weakness of LFC that Barcelona will look to exploit? Do they have any?

SM: It all depends on Klopp’s starting XI. If he goes with Trent Alexander-Arnold and Dejan Lovren on the right then that would be a target area. Trent struggles against players with pace who can beat him on the outside. Lovren is only just coming back into the fold after injury and even when up to speed he has bizarre moments which see him reckless leave his position and expose Liverpool. He’s drawn to the ball. Tempt him enough and he’ll go hunting it to the detriment of the team’s shape.

ZL: As a Liverpool fan, are you hoping Valverde starts Coutinho on the left, or Ousmane on the left, or opts for neither and fields a midfielder there like Vidal or Roberto?

SM: Roberto or Vidal would be a safer option but then that might impact how open Barcelona are. Dembéle scares me more than Coutinho. I know he’ll be up for this match and he scored a worldie against United but I feel we have a better chance of stopping him than we do Dembélé.

ZL: If Firmino misses today’s match, do you expect the strategy to shift for Klopp?

SM: I don’t. If anything it might actually help execute the game plan. With more pace in the final third, the more chance Liverpool have of catching Barca on the break. If Firmino misses the match then we might see Mané centrally and Origi on the left.

ZL: How would you say the defeat in Kiev changed the team mentally?

SM: I think it increased their desire to win. It was a bitter pill to swallow. A 3-1 defeat didn’t tell the whole story but the history books document the scoreline and not the actual performance. This team have a point to prove. There’s a desire to right the perceived wrongs and the entire squad seem to have bought into that idea.

ZL: How would you say Klopp has improved as a manager this season?

SM: There’s a patience there now. It’s not full throttle like it has been in the past. Players are managed better. Games are managed better. There’s a confidence to Klopp that I’ve not seen before and it’s translated into performances on the pitch. Liverpool know when to sit deep, when to press high and when to go for the kill.

ZL: Do you think the added pressure of the title race has helped Liverpool stay focused?

SM: It’s helped with the focus of the team as well as the sharpness. Liverpool aren’t blessed with City’s squad, they can’t rotate key players as often as them meaning they’re playing in high pressure situations on a more regular basis. Their legs may be worse off for it but their minds won’t be, not until the season comes to an end. This, coupled with the hunger to be known as winners as opposed to perpetual runners up, has kept them on track.

ZL: Liverpool haven’t drawn a match since March 3; would you say that Klopp prepared the team to peak during the home stretch of the season?

SM: Klopp’s Liverpool team always seems to put together good runs towards the end of the season. It’s the third season this has happened now and it can’t be a coincidence. There’s always a slow January/February with dropped points and then form picks up and Liverpool finish on a high.

ZL: What have you made of Firmino’s season thus far? Would you say he’s dropped in form or is that overblown?

SM: Firmino is Firmino. What he brings to the table is rarely appreciated by those not affiliated with Liverpool. He sacrifices himself for the good of the team. This year he’s had to play as a No.10 to help the midfield with Klopp opting to use a 4321 shape at times.

It had an impact on his output but when everyone was up to speed and familiarised with what Klopp wanted, Firmino started scoring again. He’ll never be as productive as Salah or Mané but he doesn’t have to be.

SM: More goals than the Spurs vs Ajax match! I expect Barcelona to dominate but Liverpool to have at least three good chances on the break. An away win would be the dream result.