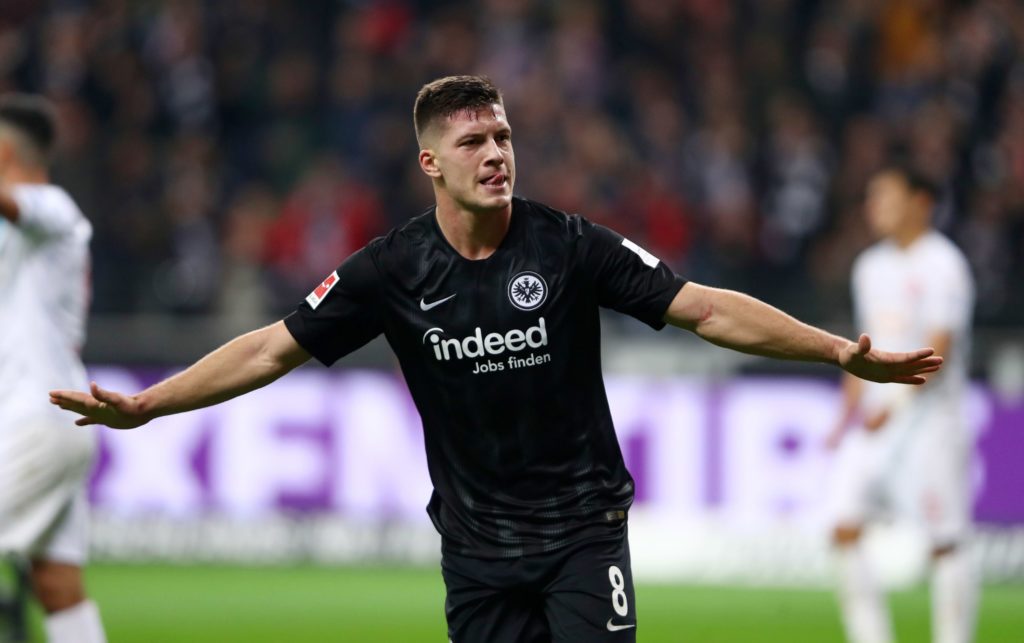 The top scorer in the Bundesliga. The 2nd-leading scorer in the Europa League. The youngest ever player to score five goals in a single Bundesliga game. 20-year-old Luka Jović is an integral part of a Eintracht Frankfurt team who haven’t taken their foot off the gas pedal since last season’s unforgettable campaign.

Despite losing four starters (two on free transfers) as well as manager Niko Kovač, Die Adler have improved on last season, in which they finished witpin the Europa League spots and won the DFB-Pokal Final. The German club have topped their Europa League group while also keeping pace in the race for Champions League football, with their Serbian prince at the forefront of the onslaught.

Jović has endured a meteoric rise to prominence in recent months to become one of the hottest young properties in Europe, a rise that can only be comparable this season to that of Krzysztof Piątek, three years his senior, who is leading Serie A’s scoring charts for Genoa.

Born in Bosnia & Herzegovina, in a small village by the name of Batar, he has travelled via Portugal to end up as a rising star of German football.

His first move though, was to Belgrade, as a 7-year-old, where he was offered the chance to take part in a development league for children in the area. Luka took to this like a duck to water, and his talent was evident from his very first foray into the league. He scored a hat-trick in his first game, which prompted his father to be offered €50 for each goal he scored, plus travelling costs from his home village to Belgrade.

It was not long before Toma Milićević, a scout for Red Star Belgrade, could see in Luka the talent required to become a professional footballer. He offered the youngster a trial and he duly obliged. There was early competition for the striker though, as Partizan Belgrade also showed immense interest in signing him. Nonetheless, his father decided staying with Red Star was the best course of action for his son’s development.

Jović shone in the youth teams and was quickly regarded as a wonderkid for the future. Such faith was shown in the young Serb, he was given his debut for Red Star at just 16 years, 5 months and 5 days old, as a substitute against FK Vojvodina.

It took him just two minutes to write in his name into the history books and give everyone around a glimpse of the career he was about to embark on. Jović scored 120 seconds into his debut, a record for the youngest goalscorer in the club’s history, a record previously held by Inter Milan legend Dejan Stanković.

He soon went on to break another Red Star record, becoming the youngest player to appear in the Eternal Derby, the match between Red Star Belgrade and their fierce city rivals Partizan Belgrade, who had tried to sign Jović as a child. Jović took to the field at just 16 years, 9 months and 25 days, but failed to make a serious impression on the game, with the immense pressure of the occasion weighing down on such young shoulders.

His character was never in question at Belgrade, and he sprung to life in the second half of the season, scoring six goals for the club and earning himself a new contract at the same time.

By the 2015/16 season, Jović was the first-choice striker for his side alongside Hugo Viera. But trouble was brought to his family in November of 2015 when a racketeer issued a warning to his family that if they did not pay a large sum of money to the guy, he would have it seen the Luka had his legs broken. Luckily for the entire family, the authorities soon apprehended a suspect and the threat was no more.

It was in February of 2016 that Luka decided to move on to new pastures, as the 18-year-old made the first major move of his career, joining Portuguese giants Benfica. However, reports by Football Leaks would expose that Jović’s contract was actually owned by Cypriot side Apollon Limassol. Benfica paid €7 million in five installments of €1.25 million, contrary to initial reports of a €2.2 million transfer fee. Prior to the Benfica transfer, Israeli businessman Pini Zahavi sold Jović’s economic rights from Red Star to Apollon–the club he  controls–in order to circumvent FIFA’s anti-third-party ownership rules (TPO).

As to be expected with such a steep step up in competition, he stagnated in development; the Serbian forward went from first-choice record breaker at Red Star to playing for Benfica B in the Segunda Liga. He made 18 appearances for the Benfica reserves side, scoring four goals. He was only afforded four opportunities in the first team over the next 18 months, failing to score in any.

One week, with Kostas Mitroglou out of form and Raúl Jiménez injured, Rui Vitória decided to start Jović alongside Jonas. He had just caught fire for the B team, and he was impressing so much in training that the manager saw it fit that he start the next match. He selected Jović to train with the first-team, causing Mitroglou to get nervous and anxious, even cursing in Greek after learning the manager’s patience was finally running thin. Rui Costa, a club legend, approached the young Serb and give him words of advice. “You see, this is what you can do, it’s all in your head.”

Indeed, it was all in his head–it had gone to his head. That same night, Jović stayed up past midnight clubbing in Lisbon, and was caught. He was removed from the squad for the next match and locked out of the first team.

“I wasn’t professional,” says Jović of his time at Benfica. I had mental issues, I had homesickness and I made serious mistakes.”

Some club needed to save Jović from the nightmare of his Benfica spell, and that club would be Eintracht Frankfurt, who offered a 2-year loan deal with negotiations for a permanent transfer at the end of that period. Benfica accepted and Jović made his way to Germany in the hope of more first team opportunities.

A fee of €20m was agreed between the two clubs, payable at the end of the 2018/19 season. Frankfurt kept their end of the bargain too, as Jović made a total of 27 appearances for his new side last season, getting back to the form he showed in his early years, and earning himself the wonderkid tag that is so often thrown around like confetti. The Serb was on the bench for Frankfurt’s phenomenal cup win over Bayern Munich, masterminded by now-Bayern manager Niko Kovač.

His form throughout that season was enough to earn him a call-up to the Serbia national team for the 2018 World Cup as part of the 23-man-squad that flew to Russia. He managed just the one appearance during the tournament, against Brazil in a 2-0 loss.

It was a positive experience for Jović, who got a taste of international football and a taste of football on the biggest stage of all, as his Frankfurt side were set to enter the Europa League in the 2018/19 season.

This season is where the Serb has exploded onto the scene, in the eyes and minds of fans and scouts all around the world. He has formed an industrious, flourishing partnership with Sébastien Haller and Ante Rebić up top.

The forward currently tops the Bundesliga scoring charts with 10 goals, as well as three assists. Five of those goals came in a record-breaking haul against Düsseldorf, but he has proven to not be a flat track bully this season. He has managed goals against the likes of Hoffenheim and Schalke, but plenty more will soon feel the wrath of his lethal finishing come the season’s end.

His exploits in the Europa League have caught the eyes of fans around the world, scoring in four of the six games, despite coming off the bench in half of those games.

In all competitions, Jović has made 20 appearances this season and has been involved in 19 goals, 15 scored whilst laying on four more assists. This form has seen him recently linked with European giants such as Barcelona, Liverpool and Bayern Munich.

The 20-year-old has come a long way from his village life in Serbia to a record-breaking superstar in European football. At such a young age, the forward has a lot more to learn and a lot more to achieve. First of all, he will set his sights on Europa League triumph and Champions League qualification, and later, he will focus on battling Aleksandar Mitrović out for a starting spot on Serbia. Jović has come a long way in both maturity and skill, and Eintracht should be rewarded for taking a risk on such a prodigious talent. Whether that reward will come in the form of money, trophies, or both, remains to be seen.