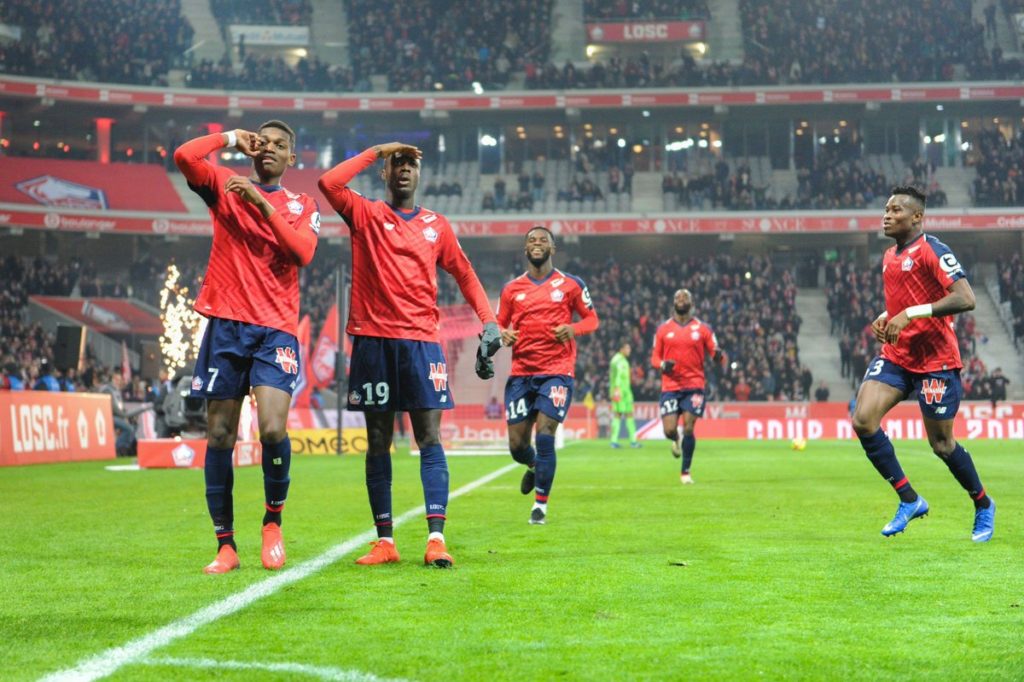 Six months following the closure of the summer 2018 transfer window, it’s fair to say we can make some conclusions now. Several transfer windows saw their club spend record amounts on new arrivals, yet fall into the relegation zone and sack their manager. Others saw their team’s new signings flourish, leading to prospective fees that would soon quadruple their profit. And others, well, others may have just found the parts to deliver them their first title in decades.

These are the six best transfer windows of summer 2018.

After surviving relegation by a hair, Lille sporting director Luís Campos went out and put together the most decisive influx of attackers that the summer 2018 transfer window would witness.

Jonathan Bamba and Rafael Leão arrived on free transfers, and Jonathan Ikoné arrived for €5 million, thus composing three fourths of their front four. Nicolas Pépé, the right winger, had arrived for €10 million in Campos’ first window, but was wasted up top by Marcelo Bielsa before finding his footing under new manager Christophe Galtier in his natural position. José Fonte, who had started for Portugal’s Euro-winning side just two years earlier before falling into obscurity at West Ham United and Dalian Yifang, returned to Europe on a free transfer. Since then, he’s been a rock at the back for Lille, utilizing his experience in a young dressing room, and even wearing the captain’s armband at times.

Zeki Çelik, on the other hand, joined Cengiz Ünder and Çağlar Söyüncü in players who have seamlessly transitioned from Turkey’s second division to starting in a top 5 European league. After arriving for €2.5 million, he was expected to be behind Jérémy Pied in Galtier’s rotation, yet he has since made that right back spot his own, linking up with Pépé, threatening defenses with his pace and creativity (5 assists) and holding it down defensively.

Perhaps Campos won’t surpass his previous work at Monaco, which saw him discover the likes of Bernardo Silva, Tiémoué Bakayoko, Thomas Lemar and Fabinho, building a title-winning team that would soon cash in record profits. Thomas Tuchel’s PSG side are too good to let Lille win the title. But after treading water financially last summer and surviving relegation by the skin of their teeth, Campos has brought Les Dogues back into France’s upper echelon.

This summer, the talent recruitment team at Genoa had the kind of transfer window scouts all around the world dream of. They signed Krzysztof Piątek from Polish side Cracovia Kraków for €4.5 million, Cristian Romero from Argentine side Belgrano for €1.65 million, and Christian Kouamé from Serie B side Cittadella for €5 million.

Piątek has already set Europe alight, quickly becoming the Capocannoniere frontrunner before moving to Milan in January for €35 million, nearly eight times his original transfer fee. However, if the Polish striker’s early work at the San Siro is anything to go by, €35 million is looking like a bargain for a player who might just bring Milan back to the Champions League after a 6-year-long wait. Genoa may have just found Serie A’s next great Eastern European frontman. Romero, on the other hand, has slid into the heart of defense, and it appears he’s already set to land Genoa a windfall, with Juventus reportedly reaching an agreement to purchase him for €30 million this summer. Romero is a rugged defender, dogged in the air and aggressive in the tackle, while Kouamé is a hybrid between a winger and a second striker.

The Ivorian formed a beautiful partnership up top alongside Piątek, offering electric pace, relentless work ethic, aerial strength and quick-witted link-up play. Antonio Sanabria has since replaced Piątek, scoring three goals thus far since arriving on loan from Real Betis. With the two up top, Genoa can be sure to surprise quite a few teams, just as they have done against Juventus, Lazio and Atalanta this campaign.

When it’s all said and done, Genoa will aim to make €100 million from their three summer signings, as desired by their ambitious president Enrico Preziosi. As long as Kouamé keeps playing the way he is, they might just crack nine figures.

A year after winning promotion, Wolverhampton Wanderers have continued their upward progress under manager Nuno Espírito Santo, with the club currently in eighth place in England’s top tier, only behind Watford on goal differential.

Bucked by Chinese investment group Fosun International, which took control of the club in the summer of 2016, Wolves secured permanent transfers for Diogo Jota and Willy Boly, both of which were crucial in last season’s promotion push. They also purchased Léo Bonatini, who was vital in the first half of Wolves’ Championship-winning season, yet dropped off towards the end.

After finding his opportunities limited, Bonatini left on loan to Nottingham Forest on the January deadline day, and Forest do have a clause to make the transfer permanent.

There’s a reason why Bonatini has found opportunities limited this season though, and his name is Raúl Jiménez. The Mexican international has been involved in 43 per cent of Wolves’ league goals, having scored 10 goals and notching five assists. Nuno looked set to have a selection headache at the central forward position, with Jiménez, Bonatini, and Benik Afobe challenging for the starting spot. However, Jiménez has made the position his own, to the extent that the latter two left in January for more game time.

His brute strength and hard running suits the Portuguese manager’s style to a tee, and with Javier “Chicharito” Hernández on the wrong side of 30 and finding opportunities at West Ham hard to come by, it’s clear that Jiménez is set to take over the central striking position at El Tri.

Jiménez had previously failed to live up to the potential he showed at América, flopping at Atlético Madrid before joining Benfica, first on loan, then on a permanent transfer, becoming the most expensive signing in Portuguese football history, as well as the most expensive Mexican football ever at €22 million.

He’s currently still on loan from Benfica, but Wolves are looking to change that, with reports of a £30 million fee close to being agreed upon by the two clubs.

Jiménez isn’t the only signal that Wolves are punching above their weight. They’ve secured a permanent transfer for Spanish international Jonny Castro, as well as Portugal’s first-choice goalkeeper Rui Patrício, both of which have seamlessly broke into the starting line-up.

João Moutinho, another Euro ’16 winner with Portugal, has added experience and calm in midfield after arriving from Monaco for €5.6 million. And with youngsters Adama Traoré, Leander Dendoncker, and Rúben Vinagre, the future is bright at the Molineux.

Wolves aren’t the only club to go from promotion to dreaming of European nights in a matter of months. After winning Ligue 2 last season, Reims are 6th, tied with Marseille but behind on goal differential. There’s a jam-packed race for the final Europa qualifying spot, but Reims are making a fantastic return to France’s top flight, after two seasons in the second division.

Despite losing Jordan Siebatcheu to Rennes and Ligue 2 Player of the Year Diego Rigonato to Al-Dhafra SCC, Reims bolstered their squad and readied it for the demands of France’s top tier. Ghislain Konan joined for a club record fee, while Thomas Foket and Bjorn Engels arrived to supplement Edouard Mendy and Yunis Abdelhamid in defense. That defensive solidity has kept them in the race for Europe; only Paris Saint-Germain and Lille have conceded fewer goals in Ligue 1 than Reims.

They’ve had an excellent run of form too, having beaten 7th-placed Montpellier, 9th-placed Rennes and 5th-placed Marseille this month, as well as impressive draws against Lyon and Lille earlier on. In fact, they haven’t lost a league match since December 5 against Toulouse.

Several key signings have started to reach top form during the right time, including Tristan Dingomé. After recovering from injury, Dingomé has played a key role in Reims’ uptick in form, more than validating the €1 million transfer fee that Reims paid Troyes for him last summer. Throw in the tough-tackling Alaixys Romao, who has added plenty of steel in midfield, and you’ve got a well-built side capable of upsetting the usual suspects en route to securing Europa League football. Reims also reinforced in January, bringing in Chelsea’s Abdul Rahman Baba on loan to replace the injured Konan, and, most intriguingly, Arbër Zeneli, who tied Konan’s club transfer record fee.

While at Heerenveen, Zeneli was among the top creators in Holland, racking up 9 assists before his January move. The young Kosovan attacker has already amassed two assists in his past two games at Reims, adding plenty of creativity to the side.

Despite their recent poor run of form, Borussia Dortmund are still three points ahead of Bayern Munich, and if they stay focused, they’ll win their first league title since 2012. If they can keep key players fit, they’ll have the advantage against their Bavarian counterparts, as Dortmund look set to be eliminated from both cup competitions as Tottenham Hotspur hold a 3-0 aggregate lead in their Champions League tie, while Bayern are still alive in the DFB-Pokal quarterfinals, and have a do-or-die second leg against Liverpool yet to be played.

Dortmund’s summer window was successful on all fronts. For one thing, they finally got their man: Lucien Favre. Dortmund have previously tried to appoint Favre as Thomas Tuchel’s replacement in 2017, yet Nice refused to allow him to leave, thus forcing Dortmund to choose Peter Bosz as manager. With Favre finally joining the club, BVB look far more balanced and ready to take home their first Bundesliga title since Jürgen Klopp’s glory days.

Thomas Delaney arrived from Werder Bremen, bringing physicality and energy to Favre’s double pivot. In holding midfield, Axel Witsel has found the best form of his career after arriving from China, with performances that have made him amongst Europe’s finest midfielders this season. Abdou Diallo and Achraf Hakimi have become starters in defense, while Paco Alcácer has been a super-sub striker for Dortmund. But as impressive as the arrivals are, Dortmund CEO Hans-Joachim Watzke and sporting director Michael Zorc deserve just as much credit for the departures. They cleared the squad of dead wood like Nuri Şahin and André Schurrle, and eliminated some aging players who were burdens on the wage bill, such as Sokratis, Andriy Yarmolenko, and Gonzalo Castro. Such proactive selling has allowed them to become proactive buyers.

After a heartbreaking end to their season, Liverpool came back with a vengeance. They realized that they could no longer shoot themselves in the foot with the hilariously error-prone Loris Karius, who had managed two blunders against Real Madrid in the Champions League Final. They realized that they needed nothing short of the best to achieve their goals, and so they made the marquee signing of their window a goalkeeper: Alisson Becker. The Reds spent a world record fee for a goalkeeper–€62.5 million–a record which has since been eclipsed by Chelsea’s Kepa Arrizabalaga. Alisson has had a tremendous debut season in England, becoming a key factor in the meanest defense in England, with just 15 goals conceded in league play. For the first time in decades, Liverpool can lay claim to one of the finest shot-stoppers in Europe.

The additions of Naby Keïta, who had already arranged his transfer from Leipzig the previous summer, as well as Xherdan Shaqiri, have given Liverpool plenty of options in midfield and attack, allowing them to cope with Alex Oxlade-Chamberlain’s long injury layoff.

After a slow start to his Liverpool career, Fabinho has adapted to the demands of Klopp’s high-pressing style of play, holding the entire midfield together from his holding midfield role. He’s also deputized in other areas when needed, filling in at center back against Champions League top scorer Robert Lewandowski–and rendering him goalless.

The Brazilian offers defensive solidity and allows Liverpool to transition from defense to attack in an instant with his inch-perfect long balls. After leading Monaco to their first title in 17 years, Fabinho will be hoping to replicate his feat in England.