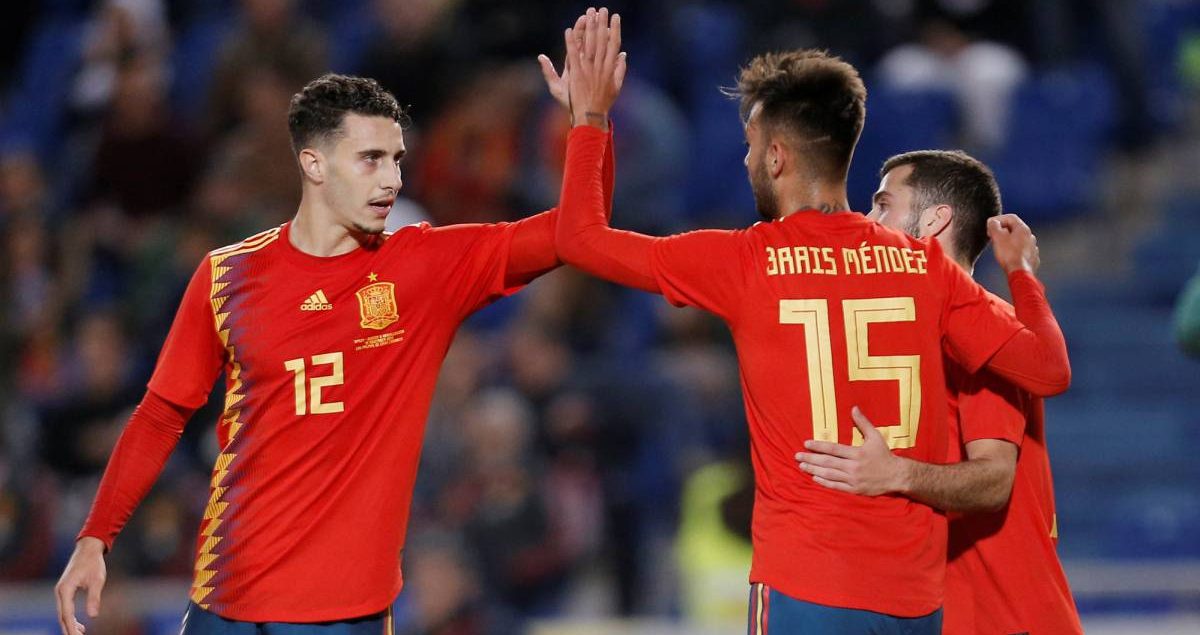 The 2018-19 LaLiga season has already brought plenty of excitement and unpredictable results, evidenced by some of the surprising names near the top of the table. With one-third of the season already being played, Alavés and Espanyol are battling for top four, while Athletic Club and Villarreal are hovering above the relegation zone.

While seasoned veterans such as Toni Kroos, Luis Suárez, and Diego Godín continue to dominate with their ability and prowess, this season has seen plenty of exciting youngsters come to the fore and impress in Spain’s top flight.

Breaking The Lines presents: the top ten youngsters, aged 23 or under, in La Liga this season.

After making his way through Real Madrid’s youth system, playing time was hard to come by for Mario Hermoso. Now with Espanyol, the defender has emerged as one of the best defenders of the ongoing campaign.

Through the first 12 league fixtures, the 23-year-old has averaged more than five clearances per match and has scored two goals. Using his size to win physical duels and demonstrating excellent positioning, Hermoso is a key reason why Espanyol are allowing less than one goal per game thus far.

Skillful on the ball and with pinpoint passing to boot, Mikel Oyarzabal has become an important part of Real Sociedad’s line-up. In 11 league appearances this season, the Basque winger has amassed three goals and one assist.

Oyarzabal has been the subject of transfer rumours recently, and La Real will want to ensure that he remains with the team. Still only 21, his overall game is bound to improve as time goes on.

Out of favour at AC Milan, André Silva joined Sevilla on loan in hopes of re-gaining his red-hot form from his Porto days. In a short period of time, the Portuguese international appears to have achieved that objective, playing the best football of his young career.

Silva has netted seven goals in 11 league games for Los Nervionenses, bringing life to a squad that previously had difficulties with consistency in the final third. The 23-year-old striker’s presence has boosted the performances of other forwards in the team as well, especially Wissam Ben Yedder.

How do you follow up a World Cup title with your country? If you’re Lucas Hernández, you continue to shine in La Liga for Atlético Madrid. Although injuries have slowed some of his production this year, the 22-year-old defender’s instincts and vision are at a high level.

Hernández is Diego Simeone’s tactical jack-knife, able to play at full-back or in central defence. His younger brother Theo is playing quite well also, on loan with Real Sociedad this season from Real Madrid.

After developing for three years in Atlético Madrid’s reserve side, Amath Ndiaye signed with Getafe in the summer of 2017. He has become an important piece for his new club and manager José Bordalás, providing a new dimension to the attack.

The 22-year-old has shown sharp passing skills and boasts the pace to beat defenders out wide. In 12 LaLiga appearances in the current campaign, Ndiaye has one goal and one assist.

With a goal and an assist in Real Betis’ thrilling win at the Camp Nou versus Barcelona, Junior Firpo gave a glimpse of what fans can expect from him in the future. Whether at left-back or in a midfield role, the 22-year-old is full of potential.

After solid performances with Betis’ reserve side, Firpo has become a regular starter for manager Quique Setién.

Massive hype came with Vinícius Júnior’s arrival at the Bernabéu, something guaranteed to happen with a transfer fee in the region of €46 million. Creative, quick and intelligent on the ball, the sky is the limit for the 18-year-old Brazilian, who worked with current manager Santiago Solari for the B team.

He has mostly featured for the reserves in 2018-19, but his first LaLiga goal against Real Valladolid earlier this month will make fans anxious to see more of Vinícius, who was recently nominated amongst the final five finalists for the Golden Boy award.

It has been quite a week for Brais Méndez. The 21-year-old midfielder has been one of the lone bright spots for an underwhelming Celta de Vigo team, with three goals and two assists in nine league appearances. After earning his first call-up to the Spanish national team, he scored the winner for La Furia Roja against Bosnia and Herzegovina on his senior debut on Tuesday night.

The youngster is certainly making a name for himself in his country.

Huesca are currently enduring a difficult run in the top flight, but Cucho Hernández has certainly been a saving grace. The 19-year-old is a fearless dribbler who knows how to find space in attack, and he’s an incredibly tricky forward for defenders to stop.

He is currently on loan from Watford. On his debut for Colombia last month, Hernández found the back of the net twice against Costa Rica. A new star could be emerging for both club and country.

It has not been easy for Ousmane Dembélé at Barcelona, with the player and the club seemingly not on the same page. Despite this, the 21-year-old still manages to impress out on the pitch.

Dembélé has four goals and an assist in league play, as well as one goal in the UEFA Champions League. If he can finally settle at the Camp Nou, those numbers will increase dramatically in the future.