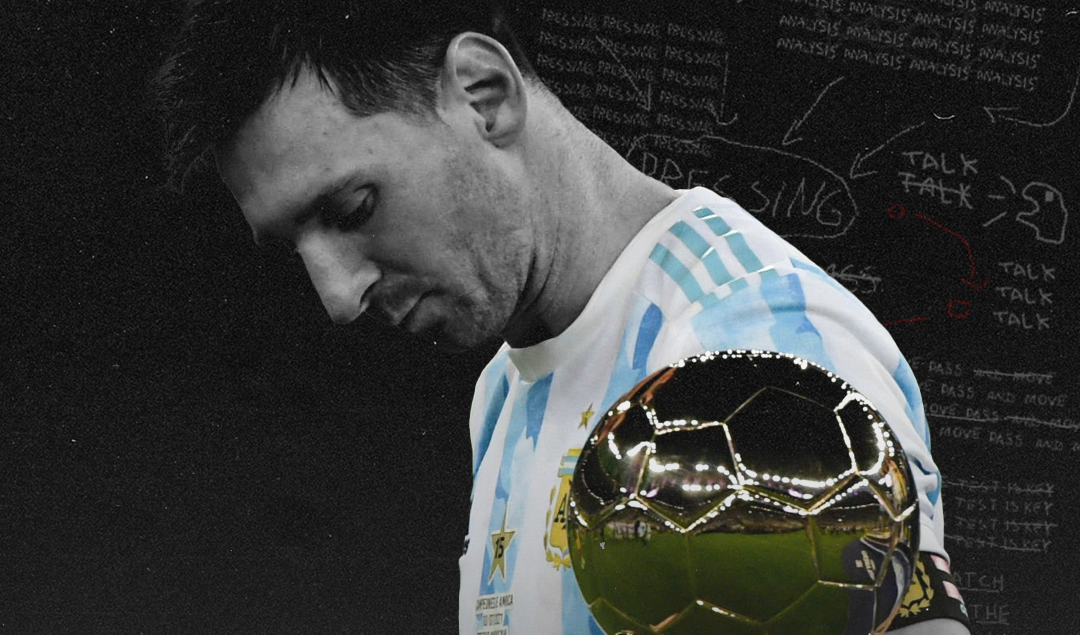 Saudi Arabia’s shock win over Argentina is one for the World Cup history books. A huge 48 places separate the two nations in the FIFA world rankings, yet Herve Renard’s side still delivered an upset for the ages in the opening Group C match in Qatar.

Lionel Messi’s penalty opened the scoring as the Argentines looked to continue their 36-match unbeaten record, and it looked for all the world like that run would continue. However, two goals within four minutes just after half-time from Saleh Al-Shehri and Salem Al-Dawsari delivered just the fourth World Cup win in Saudi Arabia’s history. But how exactly did they do it?

As the Green Falcons walked down the tunnel a goal down at half-time, pundits and those alike were beginning to question the risky defensive approach employed by Renard. Argentina had already put the ball in Mohammed Al Owais’ net on three occasions before the break, and aside from Messi’s spot kick – they were all ruled offside. 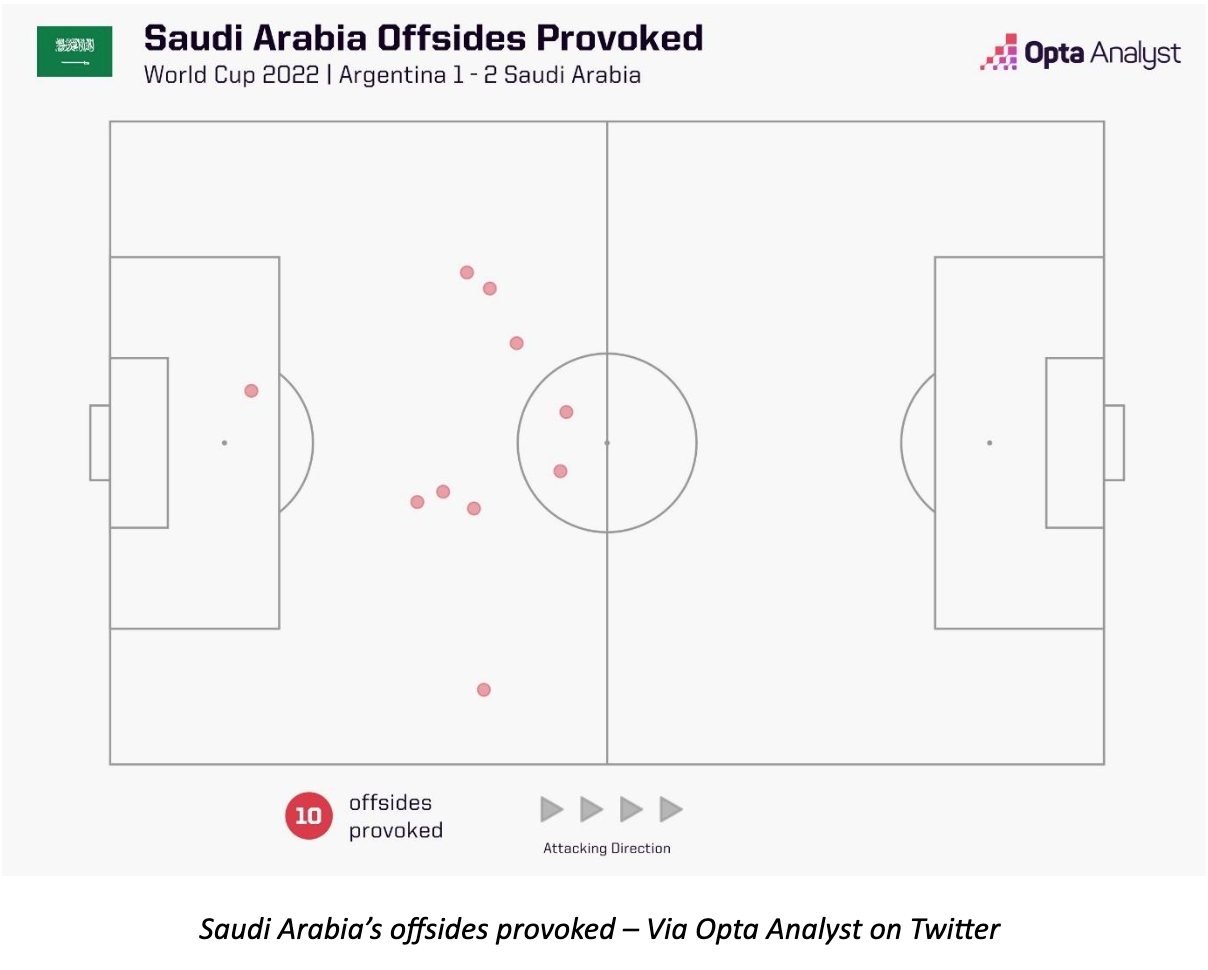 Saudi Arabia had employed an eye-opening high-line which saw their back four sat virtually on the halfway line as Argentina began building up from goal-kicks. 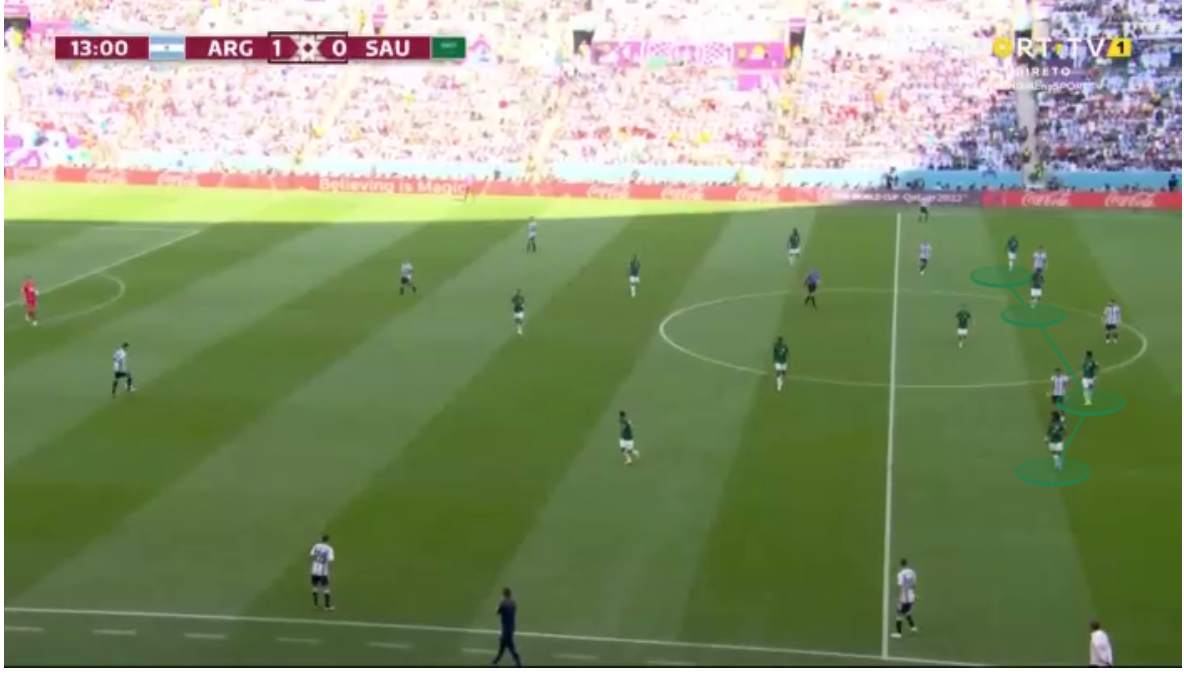 A risky strategy to say the least, especially when dealing with the pace of Lautaro Martinez in the front-line. But with the two wingers in Angel di Maria and Lionel Messi being at their most threatening in and around the penalty box – systemically pushing them back into their own half limited the danger they pose in the attacking third.

This caused Messi in particular to drop deeper but without a pacy left winger to find with diagonal balls across the field, the six-time Ballon d’Or Winner struggled to really impact the game in the way manager Lionel Scaloni would’ve liked. 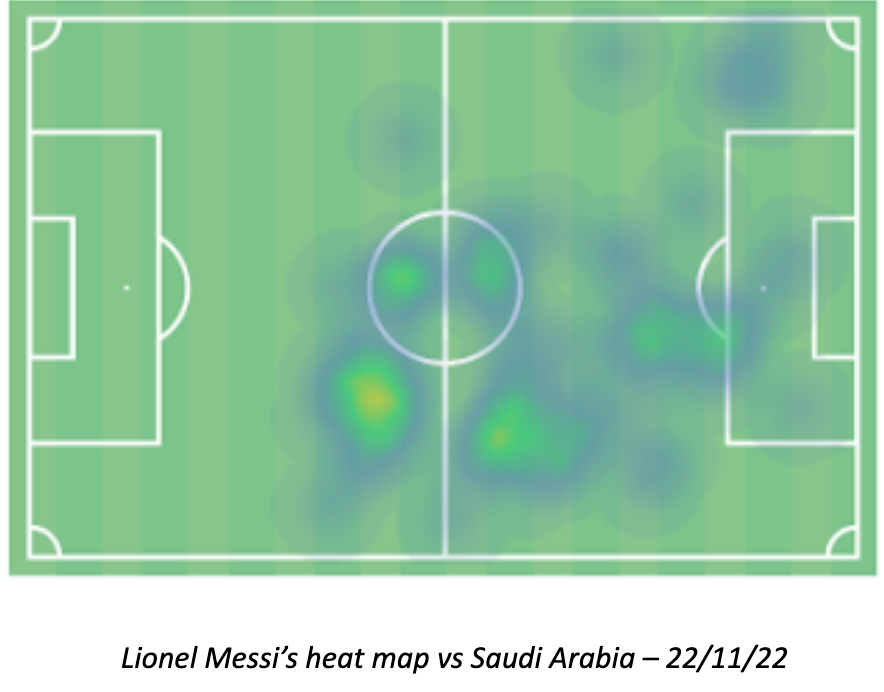 The narrowness of their defensive line also meant space in the middle of the pitch was hard to come by as they clogged up the pockets around the centre circle. Sitting in this type of mid-block limited the amount of space available for La Albiceleste’s more creative players to operate, halting their combination play and preventing a fluid build-up. Of course this still leaves space in wide areas, but that’s where the work rate of the Saudi players came in as they covered plenty of ground in order to halt overloads on the wings.

Squeezing at the right time

The energy levels of the Saudi players put them a step ahead particularly in the second half which must be credited to Renard’s team talk at half-time. Midfielder Abdulelah Al Malki said the ‘crazy’ speech in the dressing room made the team want to ‘eat the grass’ in order to cause an upset. And that’s exactly what they did.

Their high-pressing helped them to alleviate pressure on the defence which was tipped to struggle against the Argentine attacking force. Again using their narrow system, they managed to force the opposition outside into pressing traps close to the touchline. 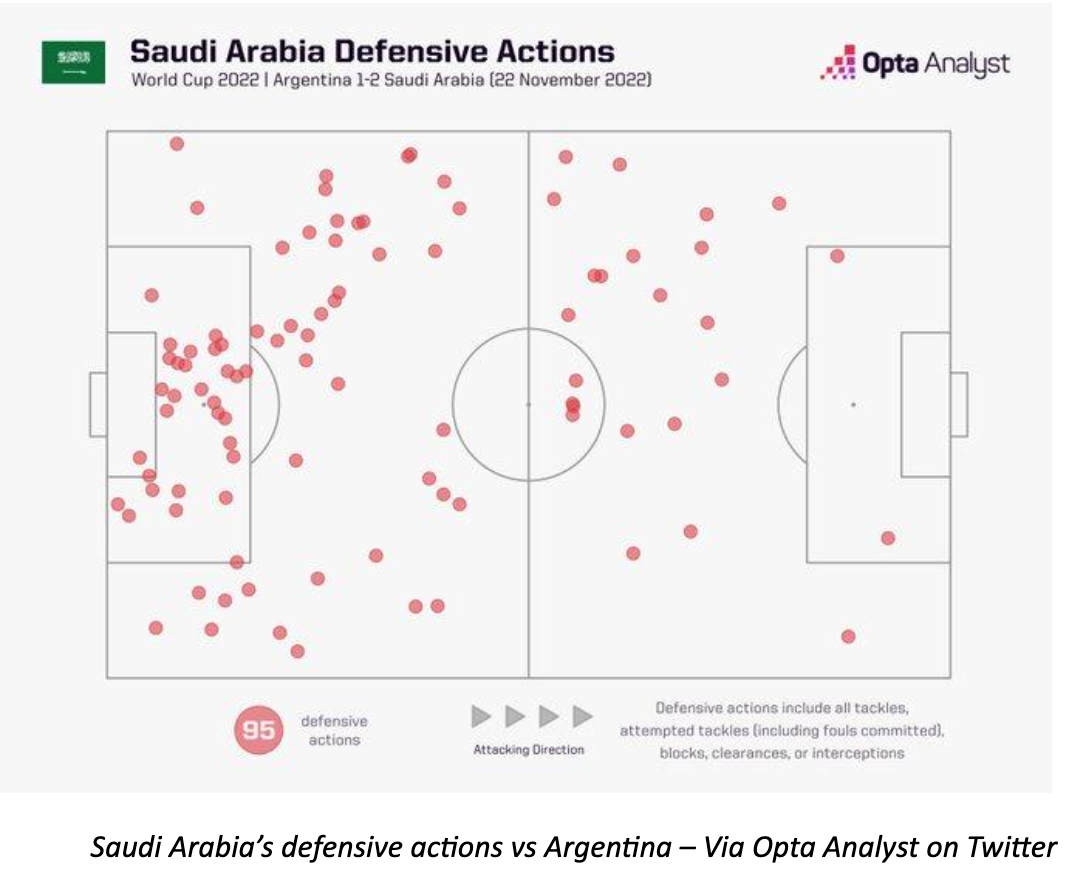 Pressing isn’t likely to be a major factor at this World Cup, with the heat of the Qatari desert likely to inhibit most teams from playing at that much of a high intensity. Yet Renard proved that with the right organisation and with well-set-up pressing triggers, teams can still win the ball back outside of the defensive third and swarm the opposition.

It sounds simple, but as their qualification data suggests – Saudi are among the best at it. They had the best ‘big chance’ conversion rate in Asian qualifying, converting 41.2% in comparison with other teams in the continent who scored just 14.3%. In this game they were no different, except from the fact they didn’t really create many big chances. Saudi Arabia scored twice from an XG of 0.14, and finished their limited opportunities well – despite lacking that goalscoring focal point in attack. 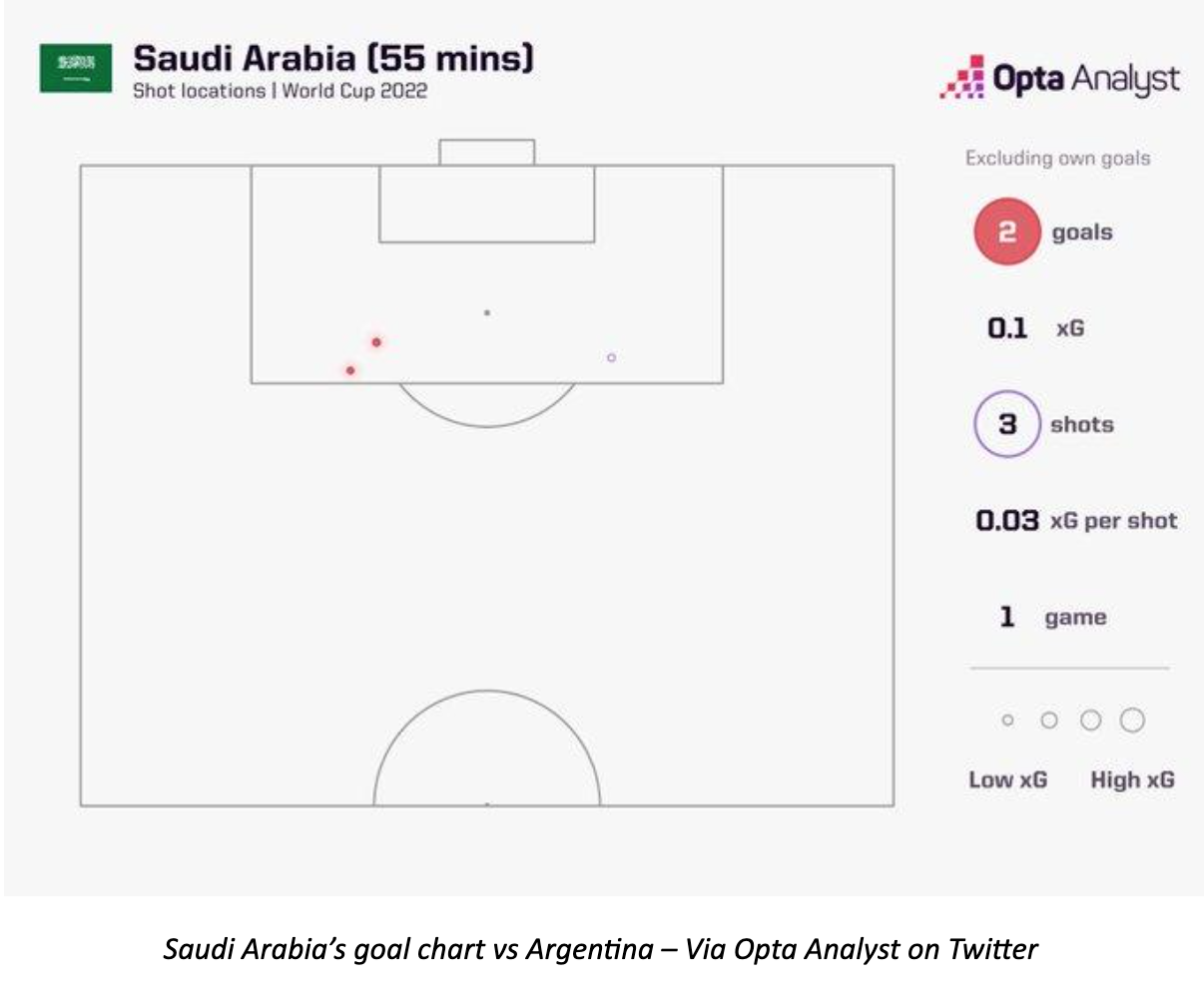 Both goals were scored within two yards of each other, but neither were expected to be dispatched which is what made the victory so spectacular. Couple that with Argentina’s XG of 2.29, it makes for even more bizarre reading. They rode their luck at times, but Herve Renard’s spectacular tactical gamble paid off. The reward for their bravery? Topping Group C after the first round of fixtures and a heightened chance of getting through to the last-16 for the first time since 1994.