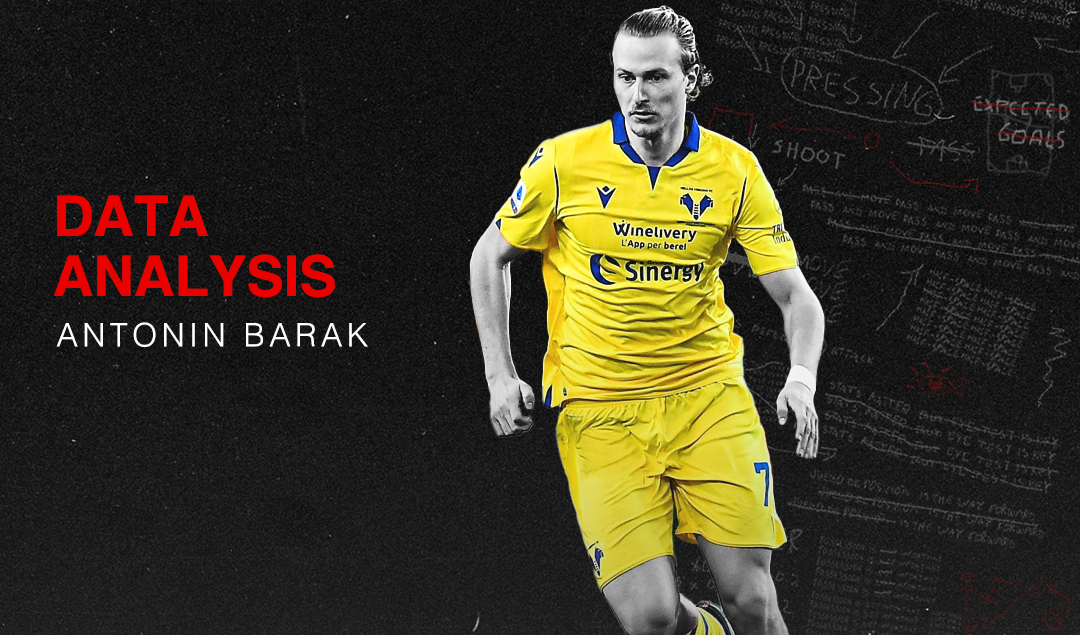 When Antonín Barák arrived in Italy in the summer of 2017, it seemed that Udinese had discovered another hidden gem. A tall and slender playmaker who was languid in movement, the Czech international was not blessed with much speed, but he possessed clean technique on the ball. With the Zebrette, he scored seven goals in 34 Serie A games during the 2017/18 season.

After failing to replicate the form from his first season, a loan spell with Lecce in the second half of the 2019/20 campaign helped get his Serie A career on track. This attracted the attention of Hellas Verona, who signed Barák on loan in September 2020 with an obligation to be bought outright.

Although the team coached by Ivan Jurić is known for its strengths defensively, the Czech international has been able to bring some creativity up front and he has scored five goals in 17 league matches so far in 2020/21. 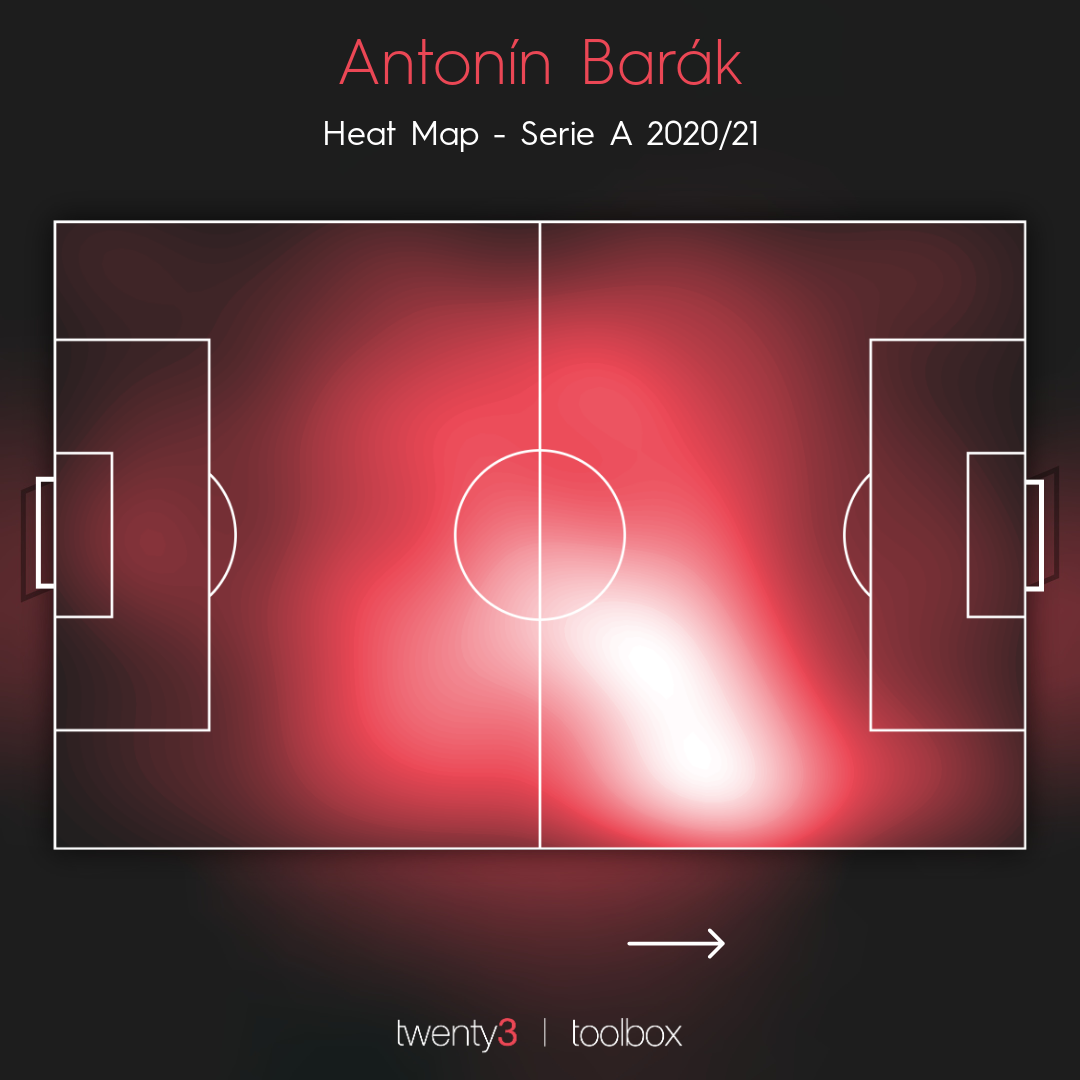 Jurić has continued to implement the 3-4-2-1 formation that he used throughout the 2019/20 campaign. In that system, Barák operates as the right attacking midfielder, with Mattia Zaccagni on the left, and either Nikola Kalinić or January signing Kevin Lasagna leading the attack.

The heat map above suggests that he will look for the ball in different parts of the pitch and he makes his presence in the midfield. It also reflects on his position as the right attacking midfielder, which has been his preferred area to operate in.

Barák’s position in the Hellas Verona team allows him to either drift into a central position or towards the right-wing depending on the circumstance. He can move centrally if there is enough space between the center-forward and the two central midfielders or he can stay wide depending if right wing-back Marco Davide Faraoni is either dropping deep or advancing high up the pitch. 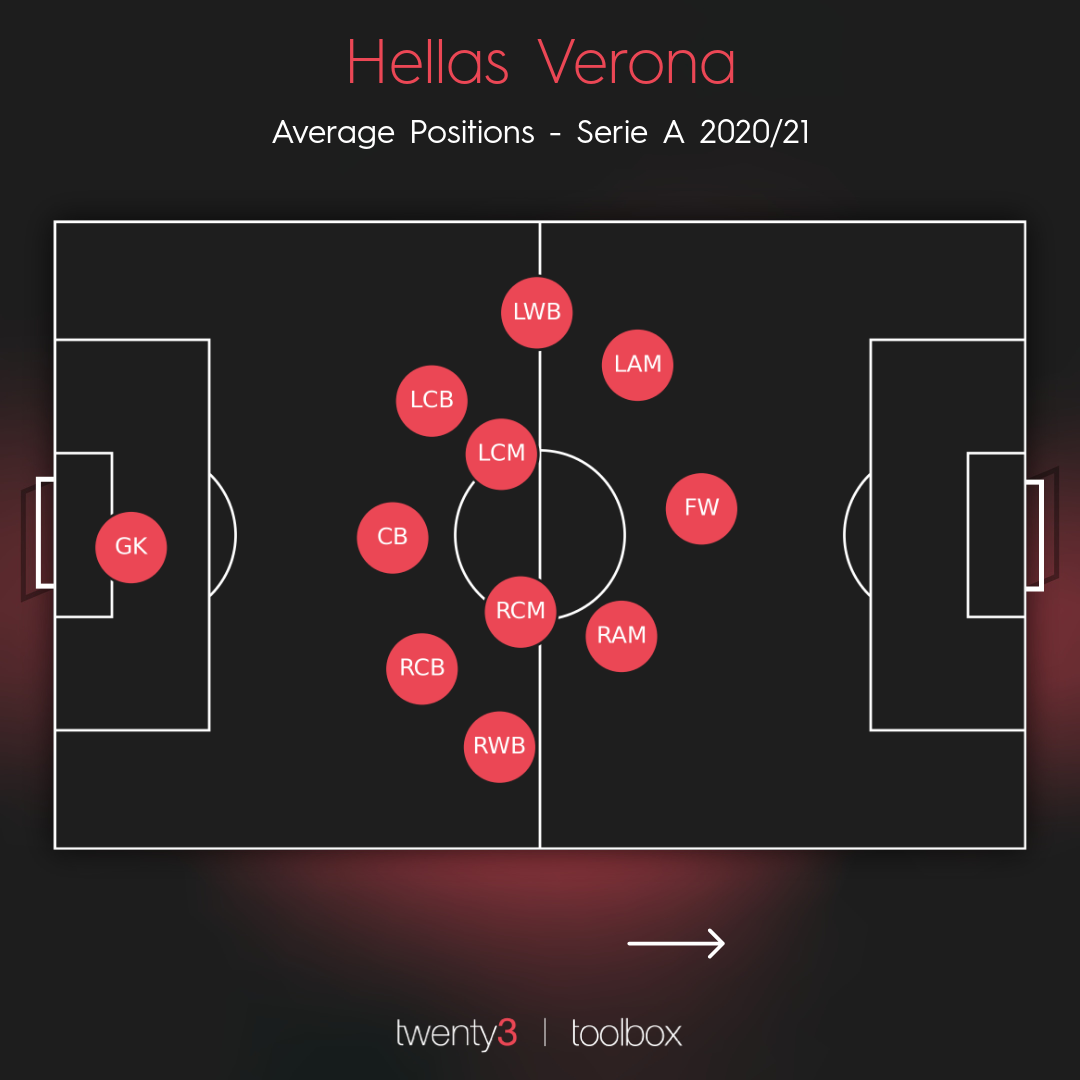 Based on the average positions, the closest Gialloblu player to the Czech midfielder on the pitch is the right central midfielder, which is usually Adrien Tamèze or sometimes Ivan Ilić. This indicates that Barák is also one of the main passing outlets for the team. So far in 2020/21, the 26-year-old has received 385 passes, which is third behind wing-backs Faraoni and Federico Dimarco.

The graphic also shows that Barák is not as advanced as Zaccagni on the pitch, which should not come as a surprise to those who watch Hellas Verona regularly. The Czech midfielder is best known for his ability to create the play whereas Zaccagni pushes further forward and gets into scoring positions. 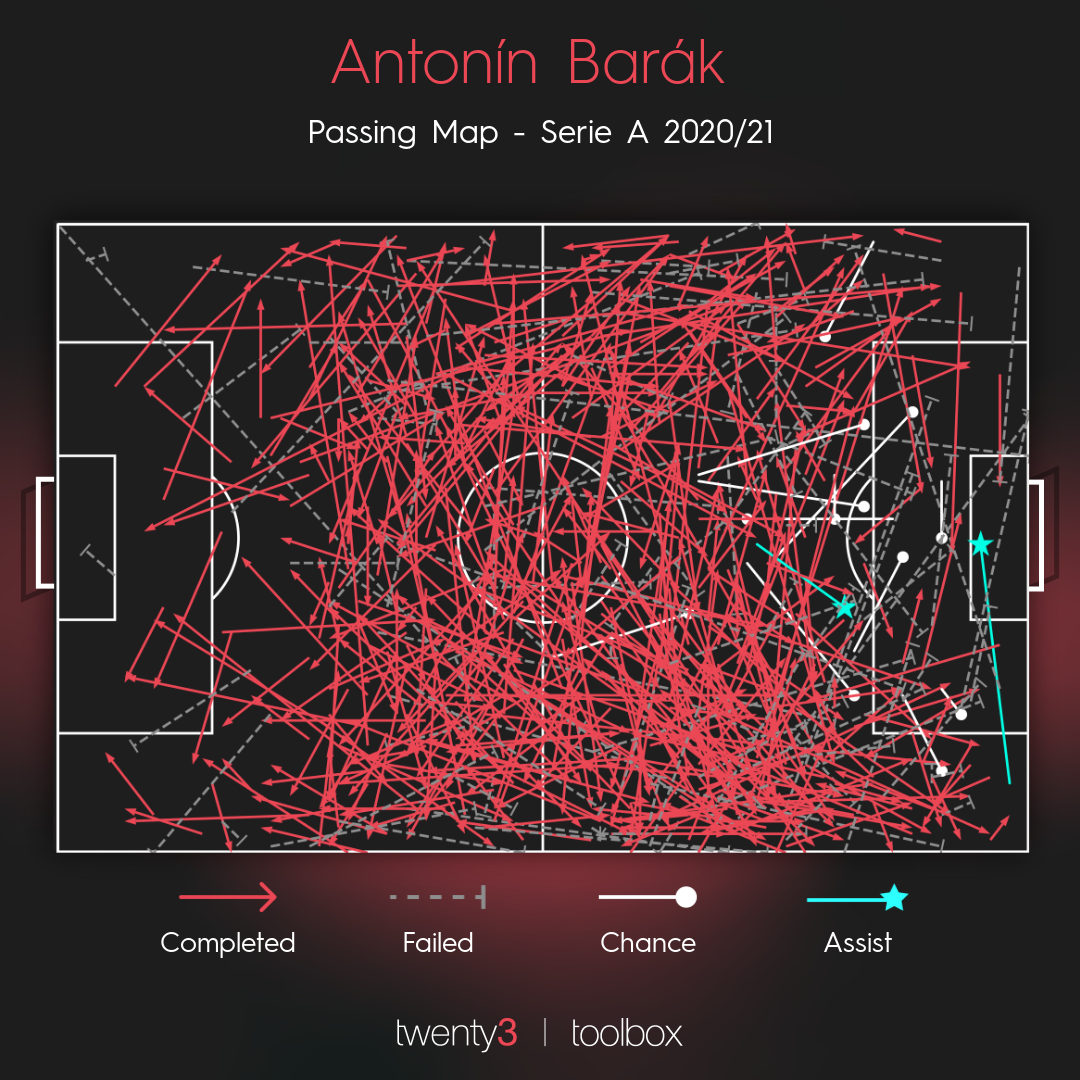 Barák has completed 494 out of 692 passes, which is fourth overall at Hellas Verona in 2020/21 and averages 28.67 out of 34.93 per 90. Many of these passes are made in midfield and are also received in the midfield. There are still many passes made in the final third but there are not many made in defence or received by players in the final third.

Looking at the passing map, the length and the direction varies on the passes. Barák can go short or he can pass it long but prefers the shorter option as based on his 21 successful long passes. In terms of direction, he can pass vertically, horizontally, diagonally, or laterally. He has completed 73 final third passes, which is equal second with Faraoni but the right wing-back has attempted more final third passes; completed 126 forward passes; completed 99 backward passes; assisted in 10 shots, which is third overall at the Mastini; and he has a passing accuracy of 82.06 percent.

Barák, like Zaccagni, is one of the few Hellas Verona players that can break the lines. While the Italian has a knack for scoring spectacular goals, the Czech international has shown that he can be a scorer when he gets within the penalty box.

He scored twice in the Gialloblu’s 3-1 victory against Benevento in Week 6 of Serie A action, finding the back of the net with a back-heel for the first and then scoring the second with a powerful shot with the outside of his left foot. A week later, he scored the opening goal in Verona’s 2-2 draw with the instinct a poacher would be proud of, poking the ball in with his left leg after a corner.

The 26-year-old did not find the back of the net again until Week 19, when the Mastini defeated Napoli 3-1, but he did it with another fine strike. Zaccagni played a sublime through-ball with the outside of his right foot, Barák controlled the ball with his first touch, and then beat Alex Meret in the Partenopei goal with an angled drive.

Last summer, Hellas Verona lost key players such as Sofyan Amrabat, Marash Kumbulla, and Amir Rrahmani to Fiorentina, Roma, and Napoli, respectively. And yet, Jurić’s side currently find themselves 9th in Serie A thanks in large part to the impressive performances of Barák.

His season has had some dark moments too. He was diagnosed with COVID-19 in October 2020 and he received a two-match suspension for stomping on Antonino La Gumina in Hellas Verona’s 2-1 defeat at home to Sampdoria in Week 12. Despite those negative experiences, there is still a lot to like about how the 26-year-old has played with the Veronese side. Key players were sold or had been returned to their parent clubs after the end of the 2019/20 season and he has been one of the club’s best arrivals.

Jurić’s team might be known for its tactical prowess and defensive solidarity but Barák is an aesthetically pleasing player who plays football gracefully. In a team that implements pressing tactics and can play at a high tempo, the Czech international is still able to adapt and play at his own pace. Despite his previous struggles, Barák is showing that his creativity is needed in Serie A and specifically at Hellas Verona.