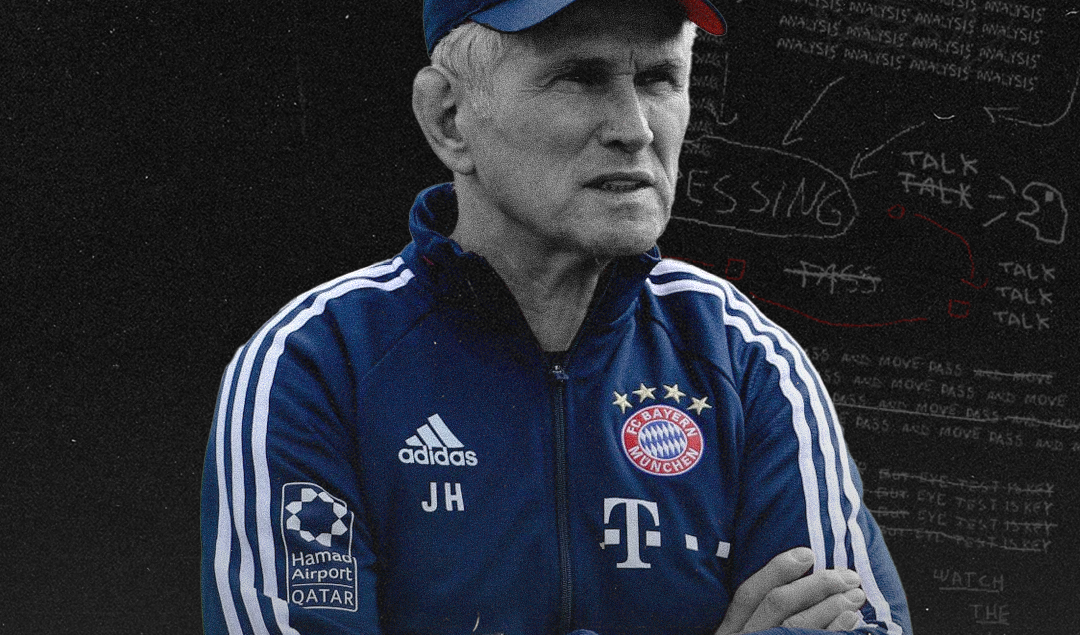 In the season 2012/13, Jupp Heynkes led Bayern Munich to a historical treble, breaking a number of records along the way and becoming the first German side ever to win the treble.

They recorded the highest point tally in the league of 91 points, had the biggest point gap between first and second place of 25 points, won the league with the record most wins of 29, and were numerically crowned the champions in just 28 matchdays. This version of Bayern cruised though most competitions and were the best team in the world at that point in time.

Bayern lined up in a 4-2-3-1. Heynckes’ preferred back four was built around the pace and physicality of Jerome Boateng and Dant, and alongside them on either flank was David Alaba and Philipp Lahm.

The pivot consisted of Bastian Schweinsteiger and Javi Martinez, and to complete the team, Bayern had a pacey and fluid front four of Arjen Robben, Franck Ribery, Toni Kroos and Mario Mandzukic.

However, both Robben and Kroos both spent parts of the season out injured, so the gap was often filled by the ever-reliable Thomas Muller often playing central or wide. 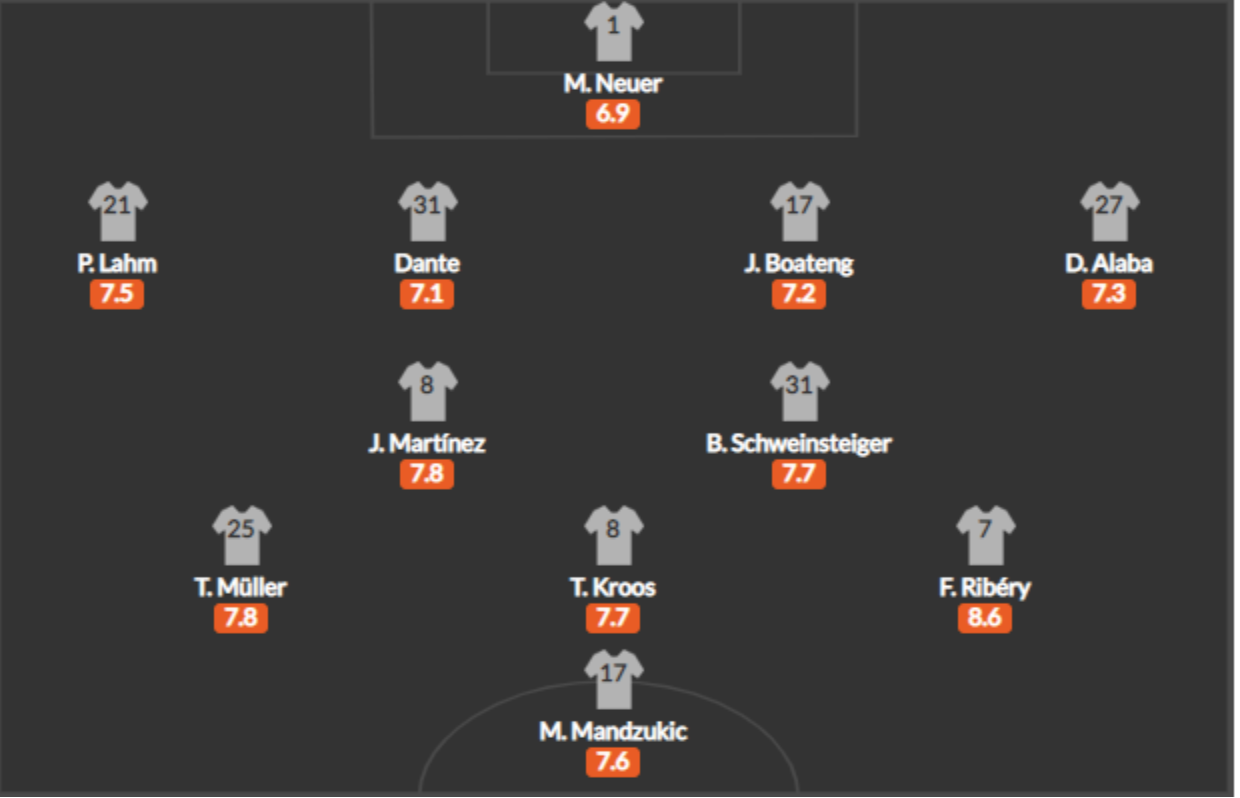 This Bayern side was built around intelligent defending and the utilization of Space. The backline would often push higher up the pitch and the gap left behind could be filled up by Neuer who at the time was redefining the sweeper role. The goalkeeper would now often collect the loose balls and be involved in the buildup when recycling possession.

The center backs wouldn’t zonally mark and played an offside-based defense; instead, they would man-mark and follow the player they were marking even if that meant defensively Bayern would be exposed.

This zonal shielding of where Bayern would cut off passing lanes is where Bayern excelled. The concept here was to use their positions to create cover shadows paired up with a counter-press to maximize their chances to win the ball back. This concept was carried over from Louis van Gaal who initially tried making Bayern a more possession-oriented side and it worked well. 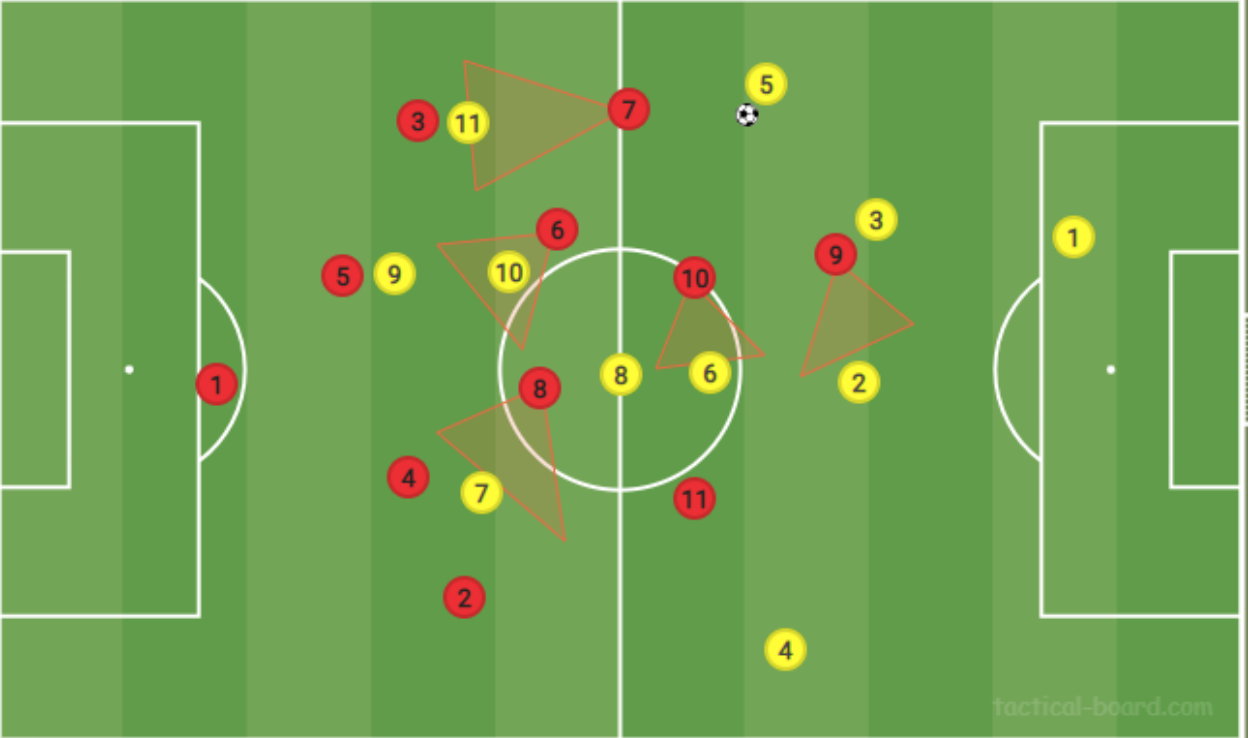 Following the success of Jurgen Klopp at Borussia Dortmund, Heycnkes adapted a Counter press and Encouraged his players to press and win the ball back as high up as possible.

Heynckes instructed his players, particularly the fullbacks to not revert to man marking or the positions they would occupy when in a defensive block as soon as the ball is lost. Instead, they would continue forwards and try to limit the field and cut down passing options to maximize their chances of winning the ball back.

This didn’t just allow Bayern to effectively counter-press but also find themselves in numerical advantage when they won the ball back. The press would start with Mario Mandzukic.

At the time, pressing the goalkeeper wasn’t a common ground like it is today due to the fact most goalkeepers of that time period were not sweeper keepers like they are today so would often be less comfortable on the ball and would be susceptible to making errors by a forced long ball.

Mandzukic would make an angled run, so the ball is forced wide to the full-backs, this would shift the shape of the team towards the ball-sided area.

From there, the wingers could then jump on the fullbacks with the pivot shielding off the center of the pitch, and Bayern’s fullbacks following the ball-sided winger who looked to offer himself as a passing option. 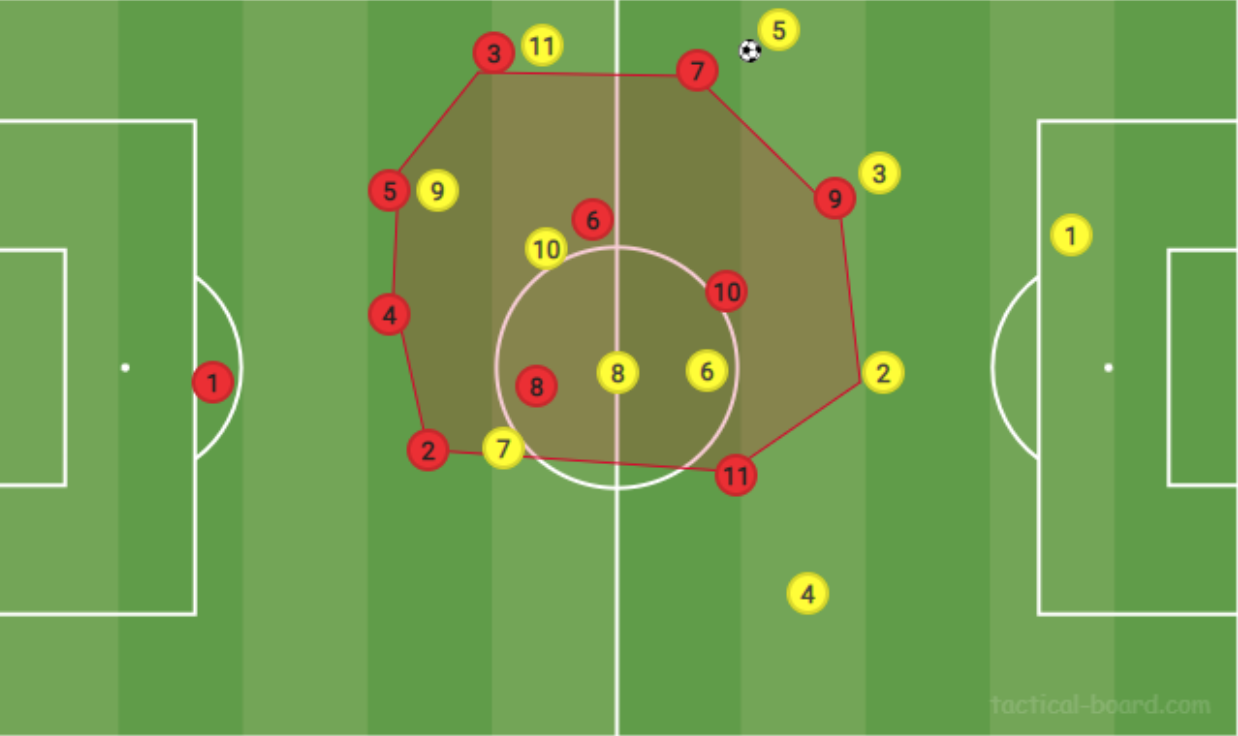 This was a fluid side. With Mandzukic leading the attack, they could interchange positions without any problems as both Muller and Mandzukic were tactically smart enough to occupy left open positions to maintain the balance of the structure and had the quality needed to make the right decisions when playing those positions.

This was evidence of Bielsa’s philosophy of players should be able to play in any position they find themselves in. This Bayern side was a nightmare for the opposition to mark.

On the ball, Neuer would push up just behind the backline and offer himself up for a pass. Both Dante and Boateng were superb on the ball and would tend to look for Mandzukic who was a genuine target man  who could hold the play from there for the team to push up high and build an attack from there.

But when Manzukic was marked out of the game, both Lahm and Alaba would open up a passing option and would receive the ball who then could look to thread the ball down the flanks or find either one of the pivot players.

Often Javi Martinez would drop into the backline to create a numerical advantage when pressed by a two-man pairing, but because Bayern could evade a press so easily, this forced teams to often not engage in a high press as that could leave fewer men to defend behind the initial press. 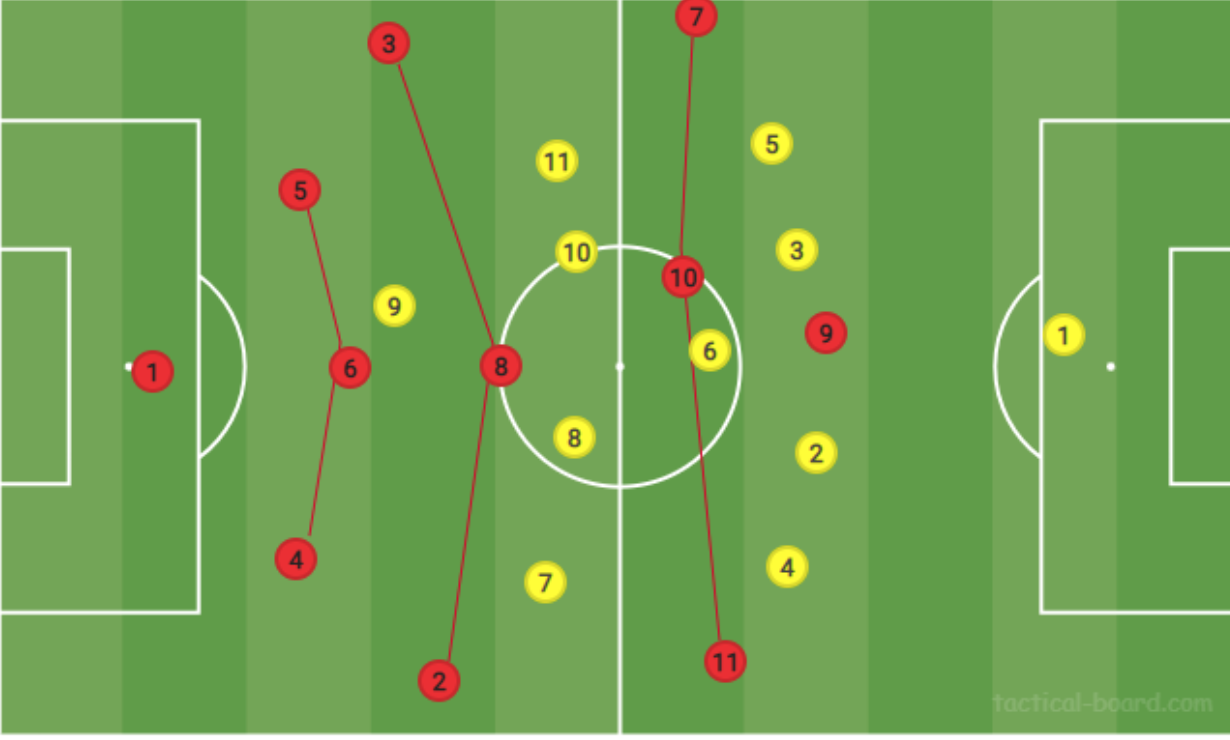 This Bayern side were notorious for playing through the center. The idea behind this was to force the opposition to move inside and defend narrow, allowing the dangerous talents of Robben and Ribery to free up in the places they preferred to receive the ball in and look to do damage. 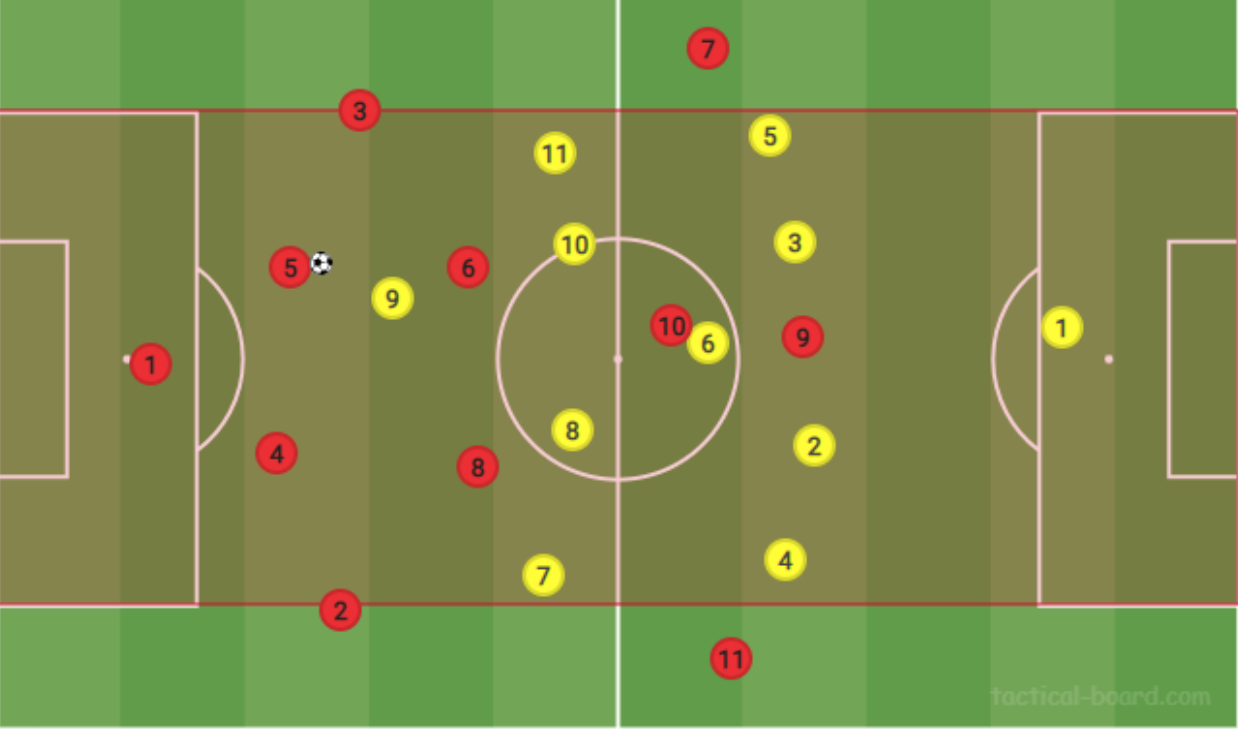 Kroos could often facilitate this, who at the time was playing as a no.10 could drop alongside the pivot players to form a three-man midfield and help progress the ball.

His dropping movement often meant Robben and Ribery could then move into the central zones with the ball to have a strike at goal. They could also look to win the 1v1 duels on the flanks to create scoring opportunities for Bayern. 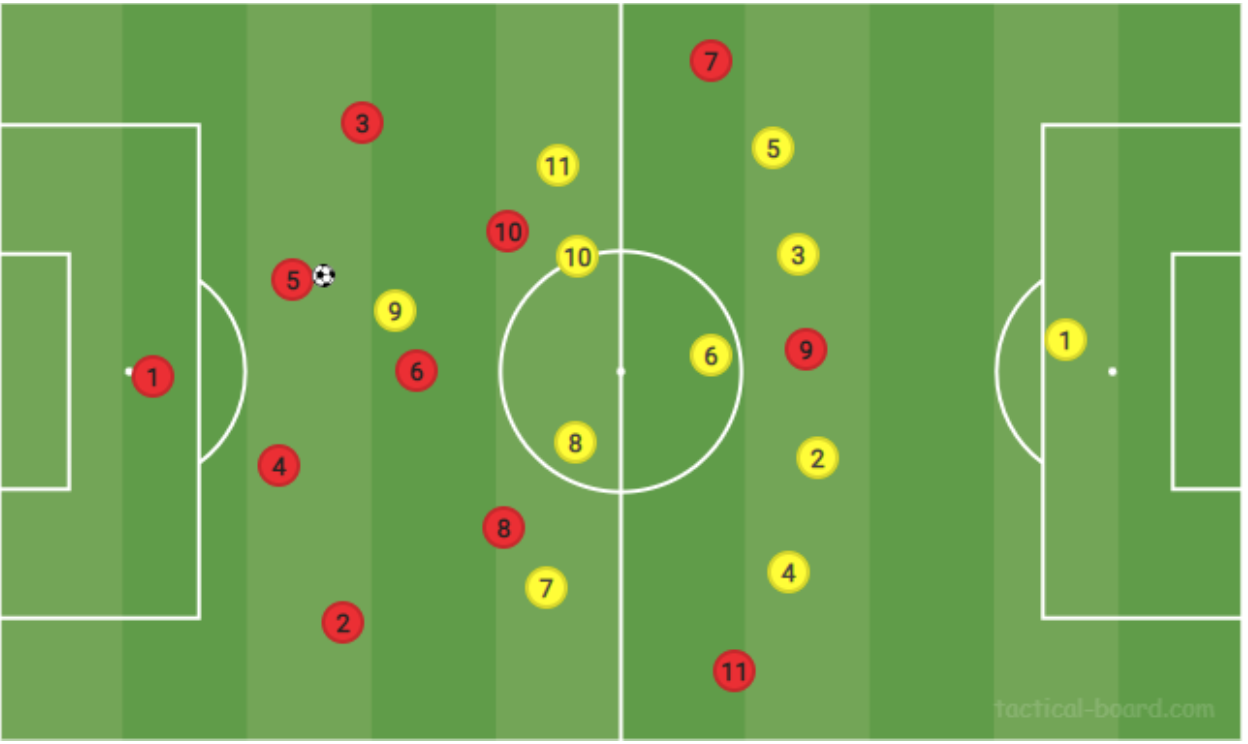 Even though Bayern seized possession in the league, their approach changed when playing in Europe. Bayern would often look to play more direct and rely upon the trio upfront to do most of the damage by having a quick counter-attacking style of play.

With more emphasis on the defensive aspects of their game, Bayern were not afraid to give possession up in favor of shutting the opposition down.

By dictating the space and the use of space on the pitch, and by zonally shielding and counter-pressing, Jupp Heynckes created a side that could suffocate the opposition in their own half and dominate the game. In the end, they created history by winning the treble, breaking many records along the way.