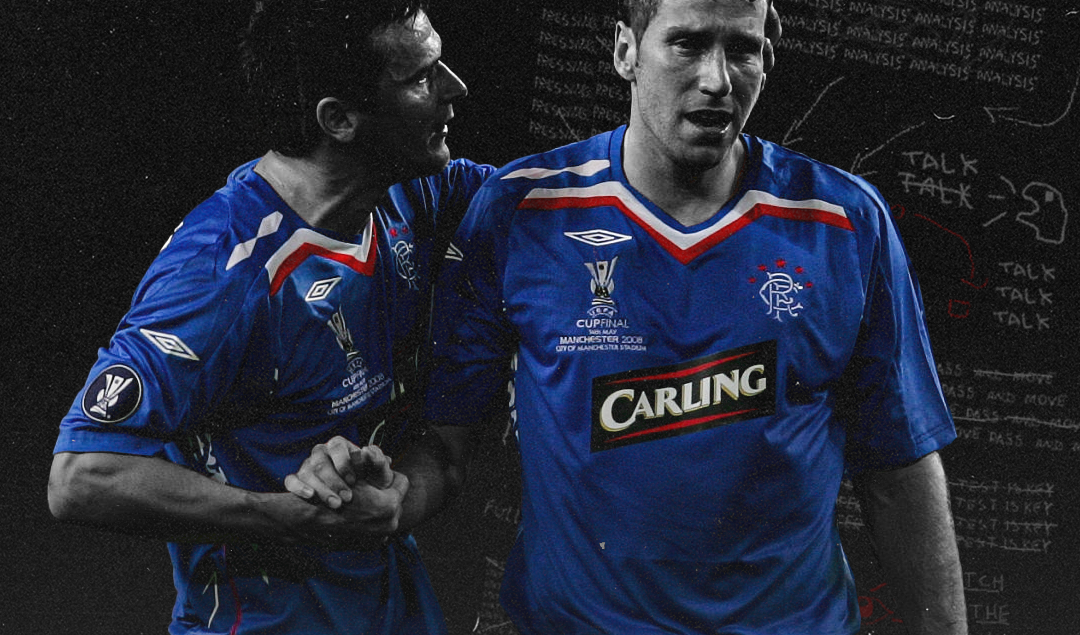 In football, there are an elite set of teams within which a philosophy of refusing to settle for second best is instilled within their roots and fortified by their fanbase. In Scotland, a seemingly respectable second place would be deemed as humiliation by both Celtic and Rangers and only the fierce Glasgow rivals. When it comes to continental competitions, however, there lies an exception to that rule.

With the stands of Ibrox swaying half in prolonged fear, half in relief as Walter Smith’s men somehow staved off an attacking trifecta of Lionel Messi, Thierry Henry and Ronaldinho to earn a 0-0 draw with Barcelona, the Gers were on top of the world, and joint top of Group E alongside Frank Rijkaard’s world class cohort at the halfway point of the 2007/08 Champions League group stage.

With the famous draw following an outstanding 3-0 win away at Lyon and the more strenuous dismantling of Stuttgart, some of the more optimistic Rangers fans will have had their sights set on the final in Moscow with their team four points clear of third. But even in such a commanding position and with the team rallying immensely for every result, many of those in attendance at Ibrox that night would have still settled for second best.

In this instance, second best came in the form of a UEFA Cup final. Although their fairytale start to the Champions League soon fell apart, Rangers still hit foreign heights in Europe where they had so often faltered before. Three straight defeats in their group saw them slip to third at the expense of Lyon, but their journey was only just getting going.

With Sasa Papac and Kirk Broadfoot either side of Carlos Cuellar and David Weir at the back, each capable protectors and enablers of the likes of Charlie Adam, Daniel Cousin and Nacho Novo further forward, this was a Rangers team who were resolute and rigid; and whilst the Champions League proved a step too far, they emerged as fierce competitors who were incredibly hard to beat in the bracket below.

First up was Panathinaikos in a round of 32 tie that can only be described as painful for both sets of supporters. The Monday of Rangers’ road to the weekend, you might say. Drawn out, dejecting, but ultimately the job got done. After a 0-0 draw at Ibrox, Nacho Novo’s goal 10 minutes from time in Athens following Giannis Goumas’ early opener was enough for the Gers to advance on away goals. Four years on from their historic EURO 2004 triumph, the gritty Greeks – Karagounis and co. donning the green of The Shamrock on this occasion – had been beaten at their own game.

Panathinaikos 2003/04: The Toppling of Olympiakos’s Empire

The next encounter with Werder Bremen followed a similar sequence of affairs as it soon became clear that Smith had infused a belief in his squad that every minute of every UEFA Cup match defined their season. Diligence and discipline defined. Another home leg to start gave Rangers a commanding 2-0 victory through Cousin and Steven Davis, thus causing Smith to adapt from a 4-2-3-1 setup to a 5-4-1 for the second leg. He was not losing that lead if his life depended on it, and the willingness and unwavering credence of fans and players alike ensured that.

A goal from Diego on the hour mark in Bremen wasn’t enough to prevent Rangers from trundling on to the last eight where Sporting were lying in wait, and with Ibrox the venue for the first leg, even draws with Bayern Munich or Fiorentina were comparably pleasant for the Portuguese.

By this point, Smith was sailing a steady ship through the rounds with Allan McGregor in the sticks behind a faultless back four, but it was the relentless, royal blue tsunami from the stands that forced opponents into a subdued, timid version of themselves. The fact that the terrifying Barcelona trio couldn’t hack it is all you need to know.

With that being said, whilst Sporting did create very little in the first leg, they did manage to take home a 0-0 draw to put Rangers under pressure as they welcomed them to Estadio Jose Alvalade. Nevertheless, even in the absence of their home crowd, the Scots continued to thrive as a direct result of the noise within the stadium. The atmosphere, be it homely or hostile, seemed to strengthen their focus where others crumbled.

Again, style was secondary to an abundance of substance, the big stage didn’t shine light on any standout superstars, but instead a subtle, meticulous ability to cohesively own proceedings. After a grueling first 135 minutes of the encounter, Rangers’ passion and patience to hold on and wait for an opportunity soon paid off. A defensive mix up allowed Jean-Claude Darcheville to grab the all-important opener an hour in, and as the Gers generated every ounce of energy and effort within their power to hold on, a moment arose that encapsulated their passage to the final perfectly. That passion and that patience, personified.

The match was deep into onslaught territory as the aching tension became complete chaos in Sporting’s constant surges forward as well as Rangers’ rare counters. Into injury time and another Sporting attack was thwarted by substitute Steven Whittaker, only this time it was forty yards from McGregor’s goal as opposed to the more typical panicked clearances from the penalty area that would set Sporting up for yet another attack.

As a result of Whittaker’s superior stamina having come on ten minutes prior, partnered with some space ahead, he decided to set foot in nosebleed territory, gain a bit of ground and rinse some seconds from the clock before inevitably being halted by Sporting’s numbers advantage. But with every tentative touch he took, a body fell beside him and the trembling expressions of the Rangers fans brightened. When no one else had anything left to give, Whittaker waltzed his way through four defenders before guiding the ball home and his name into club folklore with a goal of the tournament contender.

The elation of Lisbon lingered for a while longer until a 2-1 defeat to Celtic in the league via a last-minute Jan Vennegoor of Hesselink winner brought them back down to earth ahead of a home fixture with Fiorentina. If aggregate scores of 1-1, 2-1 and 2-0 weren’t gut-wrenching enough for the Gers faithful, this one trounced the lot.

By this point in the tournament, it was apparent that no one was ever going to travel to Ibrox and score a single goal. Even Rangers didn’t manage it in this round or the last, leaving work to be done on the road once more. Allan McGregor’s injury appeared to make absolutely no difference to an unbreakable backline, but in Tomas Ujfalusi, Sebastien Frey and co., the Scots had met their match. When two regimented, irrepressible units butted heads for 210 minutes, neither moved an inch.

With the aggregate score at 0-0, a seemingly inseparable matchup was concluded surprisingly fast by penalties. Barry Ferguson missed the visitors’ first, but a crucial save of Fiorentina’s third by deputy keeper Neil Alexander, followed by a spectacularly skewed Christian Vieri spot kick gave Nacho Novo the opportunity to win it. The Spaniard made no mistake to render all those minutes – monotonous to most, but monumentally hard-fought and heroic in their own right – completely and utterly worthwhile.

For Rangers’ first European final for 36 years, the City of Manchester Stadium was the venue, and a conversely scintillating Zenit St. Petersburg were the opponents. This was a magnificent mismatch of industry versus ferocity. To put their paradox into context, in the sixty knockout matches building up to the final, 141 goals were scored. Seven of them came in games involving Rangers; Zenit scored 14 of those on their own, conceding eight for good measure. As Smith’s side were grinding out a second successive 0-0 draw in Florence, Dick Advocaat’s Zenit were beating Bayern Munich 4-0, as you do.

Subsequently, the early stages of the final went firmly in Zenit’s favour to little surprise, but it was adversity in the form of attacking dynamism that Rangers had overcome time and time again throughout this tournament. If anyone was going to stop the formidable Andrey Arshavin, this back four had proven they were more than capable.

As many had come to expect, Rangers showed extraordinary fight to keep the game close and nullify the potent Zenit threat. A side renowned for systematic attacking prowess and an ability to unlock teams were given very little by way of openings and key opportunities by a side that did not stop running and probing at the Russians’ resolve.

Finals are so frequently defined by one moment of magic amongst the mania. One man to find a second of headspace to calculate one moment of quality. For all their strengths, on this occasion Rangers relinquished that responsibility to Arshavin: the Champions League calibre in a UEFA Cup side. On 72 minutes, a pass from the Russian was the first of perfect weight and precision in the final third all night and Igor Denisov dispatched with ease. The first goal Rangers had conceded in 464 minutes of UEFA Cup football was simply unstoppable.

From then on, Zenit were in the ascendancy as the game expanded with Rangers committing men forward. As a result, another pinpoint pass from who else but Arshavin saw Fatih Tekke tee up Konstantin Zyryanov to seal the deal in injury time, but the dejection and despair upon each and every Rangers face can quite easily be construed as the realisation of an enormous sense of achievement. Discounting a majestic piece of Arshavin skill, it was another immaculate emulation of Walter Smith’s game plan by the Rangers eleven. They could not have given more, but their all was not quite enough.

It is that same infectious addiction to the club that flows from the fans throughout that played a massive part in the Gers’ record-breaking 2020/21 campaign. And whilst their outlook on matches is significantly more fearless in the modern day, the DNA of Rangers and all its associates remains the same. The will to succeed which inhabits the walls of Ibrox and erupts into life on match day is there more than ever. Consequently, with Rangers looking primed to take on Europe’s elite next season with an exhilarating young squad, we could well see a repeat of that remarkable 2008 run extremely soon.