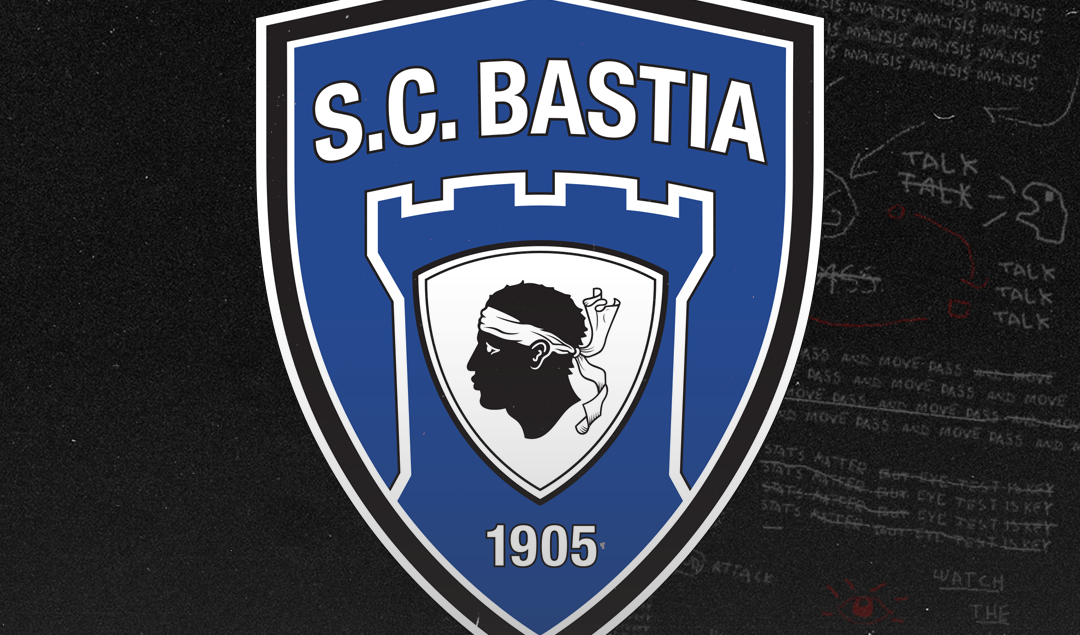 In 1096, Peter I’s Aragonese army was heavily outnumbered by the forces of Al-Musta’in II of Zaragoza. Defeat looked certain. That was before, as legend would have it, Saint George miraculously appeared on the battlefield, patronising the Aragonese and swinging the battle in their favour. He cut off the heads of four Muslim leaders and left them on the blood-stained battlefield.

Now with the force of Saint George behind him, Peter took Huesca, as it became the first city that Aragon recaptured from the Muslims during the Reconquista. The event was so significant that the depiction of the four decapitated Moors was emblazoned on the Aragonese coat of arms.

But what does this event, which occurred nearly 1,000 years ago, have to do with Ligue 2 team Sporting Club de Bastais (better known as SC Bastia), and what can it tell us about the culture of the club and the community that it originates from?

The Meaning Behind the Flag

The link between SC Bastia and the decapitated Moors at the Battle of Alcoraz can be traced back to the Kingdom of Aragon – the place in Spain where Peter’s army was based. This dynasty ruled throughout the Mediterranean in territories including Corsica. As such, Corsica, the small island off of France where SC Bastia are based, was given the symbol of the decapitated Moor. Presumably as a sign of their position within the Kingdom of Aragon.

The flag did not alter until the middle of the 18th century. In 1729, the Corsican Revolution began, in an attempt to break free from the latest rulers of Corsica – the Genoese. In 1755, the Corsican Republic finally claimed its independence, and it remained such until 1769, when the island was once more conquered… this time by France.

Before that, in 1760, General Pasquale Paoli ordered the bandana to no longer cover the eyes, but instead be raised above them – as the flag is seen in the present day. It was intended as a form of symbolism, as Corsica (albeit for a brief period) announced its liberation. “The Corsicans want to see clearly. Freedom must walk by the torch of philosophy” explained Paoli.

Today, Corsica is still at loggerheads with the rest of France, over the issue of the island’s independence. They considered themselves the colonial subjects of France, an abandoned territory that has been more or less forgotten.

The reason being… Corsica has limited regional-political autonomy. The citizens are on a geographical ‘periphery’. A separated minority representing a kind of ‘indigenous society’, where the territory is the fulcrum of their identity, and yet it is never truly theirs.

A successful resolution to the Corsican question has been a conundrum that has plagued France for decades. Despite the establishment of administrative autonomy in 1991, there remains a strong desire on the island for complete liberation from France.

Today, this is still a prevalent issue in modern France. President Macron recently spoke out against giving the Corsican language an official status, arguing that there can only be one official language on the territory of the country – French.

The Link to Football

SC Bastia has acted as the perfect prism in identifying the extent to which the people of Corsica are disillusioned with mainland France. Due to the struggling economy and small population of Corsica, the teams invariably struggle to consistently challenge for the major honours in France.

However, when the club is able to play its way into the limelight, supporters are keen to capitalise on the opportunity to voice their resentment to the rest of France. Against the odds, SC Bastia made it to the French Cup final of 2002, where they faced Lorient. During the pre-match rendition of La Marseillaise, the 20,000 Corsicans who made it in the stadium booed and whistled, leaving the then French President Chirac to leave the stadium in disgust.

The tense atmosphere around Corsican independence has been simmering for decades. It has ultimately culminated in the emergence of the National Liberation Front of Corsica (FLNC), which has come to be recognized as the major Corsican terrorist group and is responsible for thousands of terrorist attempts both on the island and on the mainland.

Most recently, before President Macron’s arrival in Corsica in 2019, two homemade bombs were found in front of the government buildings in Bastia. Their goal is simple: gain the recognition of the National Right of the Corsican people.

Likewise, SC Bastia’s fans have not always been passive with their resentment towards mainland France. In 2017, SC Bastia ultras invaded the pitch during a home game against Lyon, where several of the visiting team’s players were attacked. As a result, the team were handed an automatic loss, the club’s supporters were banned from travelling for Bastia’s next three away games and Bastia’s director Anthony Agostini was suspended for six months.

In the home game prior to this an even more callous act took place, as OGC Nice’s, Mario Balotelli was subject to torrid racial abuse from a section of Bastia’s fans.

SC Bastia and the issue of racism is not something that solely revolves around the club’s fans. The distinctive badge has also come in for criticism for its potentially racist portrayal of a Moor. People have argued that the image of the decapitated Arabs on Corsica (and Bastia’s) flag can only promote negative connotations. Furthermore, the image was birthed due to the Spanish desire to eradicate Moors (Muslims) from their country. Understandably, the xenophobic links have been criticised.

Although not from the same historical context, Austrian beer brand Mohrenbräu uses a strikingly similar image of a Moor’s head on their beer label. Last year, they considered changing its logo amid backlash for its racist stereotypes.

That being said, the Corsican flag has evolved over the centuries from a decapitated Moorish head, taken from the Crown of Aragon, to the enlightened figure, devised by Pasquale Paoli. Most Corsicans will argue that the flag is not a symbol of xenophobia, but instead a representation of the Corsican struggle for independence.

It’s natural for those who first lay eyes upon the badge of SC Bastia to wonder of the reasoning and justification for such a symbol. Uncovering the truth and meaning behind this badge takes you all the way back to the 11th century.

And whilst the meaning of the badge has changed over the centuries, its message today is more and important than ever to the people of Corsica. An issue such as this, as trivial as they may first seem, truly helps us understand the intrinsic relationship between football, culture and politics, and the complex questions that arise from these discussions.