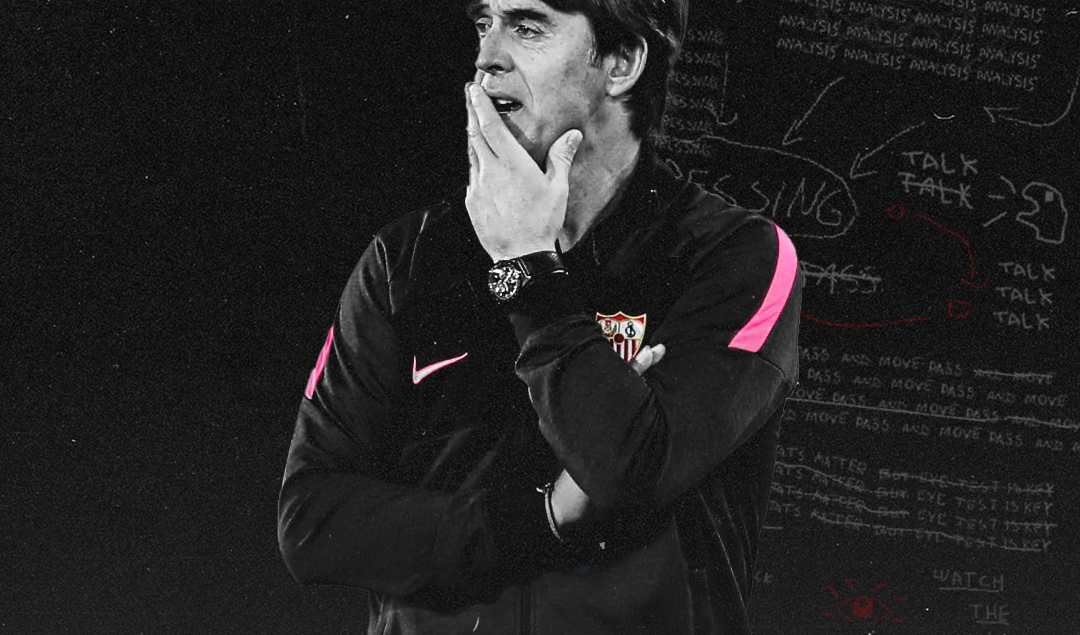 Since beginning his managerial career as an assistant coach with Spain in the 2003 UEFA European Under-17 Championship, Julen Lopetegui has racked up a rather impressive CV, albeit one that has come with frustrating misfortunes. He received his first managerial opportunity with Rayo Vallecano in 2003, but he would last just 10 league matches before being sacked, as Los Franjirrojos eventually suffered relegation to Spain’s third tier.

Following a five-year spell as a sports commentator, Lopetegui returned to management with Real Madrid Castilla, where he had originally begun his playing career as a young goalkeeper in 1985. In 2010, Lopetegui began working with Spain’s youth teams, taking charge of a talented squad that boasted the likes of Saúl Ñíguez, Kepa Arrizabalaga and Gerard Deulofeu. His first trophy came in Estonia, as Spain defeated Greece in the 2012 UEFA European Under-19 Championship on the back of a late goal from Jesé Rodríguez.

The following year, La Rojita headed to Israel for the UEFA European Under-21 Championship, as the likes of Thiago Alcântara, Álvaro Morata, Isco and David de Gea composed a star-studded squad. Spain would go on to enjoy a perfect tournament, beating Germany, Russia, Netherlands and Norway, and conceding zero goals in the process. They hoisted gold in Jerusalem, defeating Italy 4-2 on the back of a hat-trick from Thiago.

Rather than continue at the youth level, Lopetegui elected to leave the Royal Spanish Football Federation upon the expiry of his contract, replacing Luís Castro as manager of Portuguese giants FC Porto. Aided by the biggest budget in club history, Lopetegui brought in seven Spanish players, including European champions Óliver Torres, Cristian Tello and José Campaña, as well as other talented young stars such as Casemiro, Yacine Brahimi and Vincent Aboubakar.

Porto came within inches of winning the league title with 82 points, but they were narrowly edged to the Primeira by a Benfica side composing the likes of Jonas, Nicolás Gaitán and Luisão. Lopetegui’s side put together an impressive run of form in Europe, eliminating Lille in the Champions League qualifiers, topping their group, and advancing past Basel into the quarterfinals. They even defeated Pep Guardiola’s Bayern Munich in the first leg in Porto, but they were eliminated the following match as Bayern took a 6-1 victory in Bavaria — Porto’s worst-ever defeat in European competition. 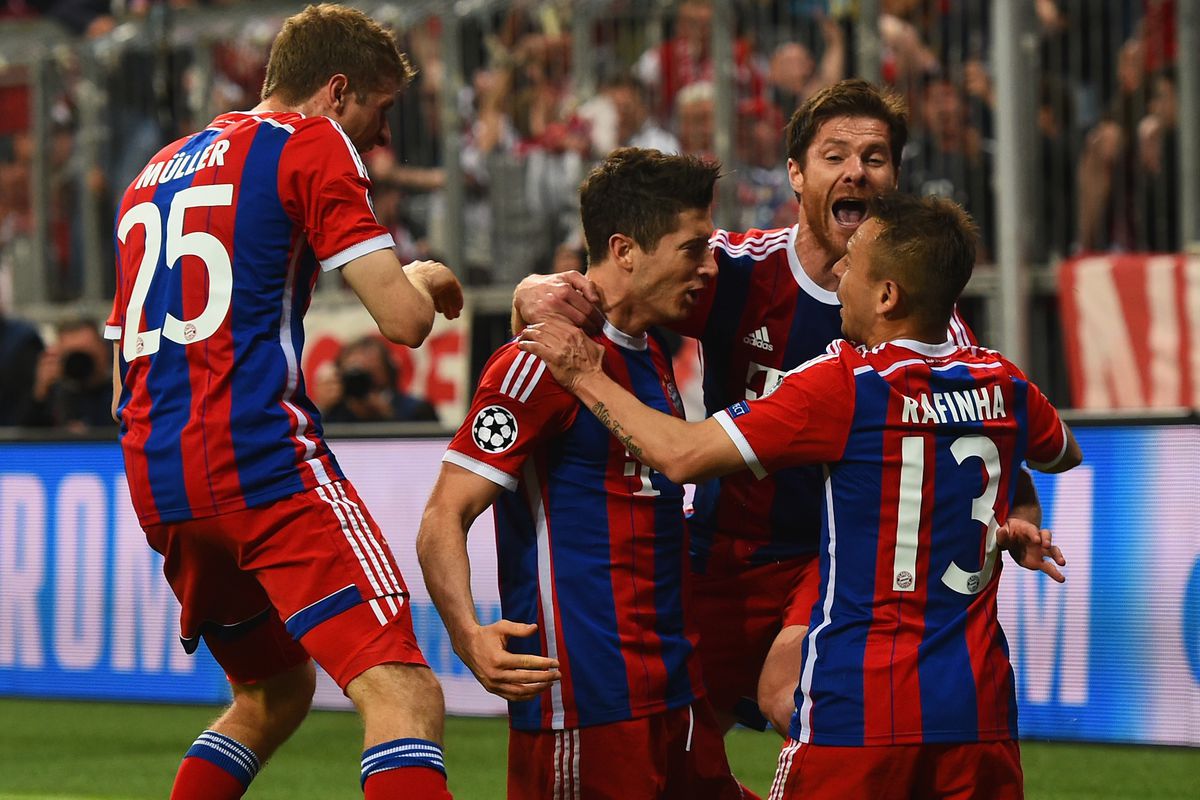 The Dragões were raided in the transfer market the following summer, with ex Santos fullbacks Danilo and Alex Sandro joining Real Madrid and Juventus, respectively, whilst top scorer Jackson Martínez headed to Atlético de Madrid for €35 million. To cap it all off, veteran winger Ricardo Quaresma joined Beşiktaş.

Their absences showed on the pitch; Porto finished third in their Champions League group, losing their final two matches to Chelsea and Dynamo Kyiv, whilst they finished bottom of their Taça da Liga group after losing to Feirense, Famalicão and Marítimo. Porto fell to third in the league table following a loss to Sporting CP — their first league defeat of the season — and a draw to Rio Ave, resulting in Lopetegui’s dismissal on January 8, 2016.

Lopetegui returned to familiar surroundings following his brief experiment in Portugal, taking charge of the Spanish national team following Vicente del Bosque’s retirement. He racked up an impressive tally of 2.4 points per match, as Spain dominated their World Cup qualifying group, winning nine matches and drawing one. Four years after being eliminated in the group stage, La Roja came into the 2018 FIFA World Cup as one of the favorites.

However, three days before Spain’s opening match in Sochi, it was announced that Lopetegui would take over as Real Madrid manager on a three-year contract following the conclusion of the World Cup. Allegedly, the Spanish Football Federation only learned of the decision five minutes before it was officially announced by Real Madrid; as such, he was fired on June 13, 2018, with Fernando Hierro taking over as interim coach.

Real Madrid’s attack suffered massively from the blow of losing Cristiano Ronaldo in the summer; whilst Cristiano led Juventus to the Scudetto with 21 goals, his replacement, Mariano Díaz, scored just 4 goals in 22 appearances in all competitions. The defending European champions fell to 9th place after a third consecutive defeat — a 1-5 loss to Barcelona at the Camp Nou. 15 years after being sacked by Rayo Vallecano following 10 league matches, Lopetegui suffered the exact same feat in Chamartín.

It seemed Lopetegui’s stock had reached rock bottom when the United States Men’s National Team reportedly turned down the opportunity to interview him for their vacant head coach role. However, on June 5, 2019, Lopetegui was appointed as the new Sevilla FC manager on a three-year contract, replacing caretaker manager Joaquín Caparrós.

Having finished sixth the previous season, Sevilla finished fourth to seal progression to the UEFA Champions League for the first time since 2016/17. What’s more, Sevilla maintained a perfect record in their UEFA Europa League group and brushed past CFR Cluj, Roma, Wolves and Manchester United, before defeating Inter in the Final in Cologne.

Sevilla tend to use a conventional 4-3-3 formation, with a front three of Youssef En-Nesyri, Suso and Papu Gómez, a midfield three of Ivan Rakitić, Fernando and Joan Jordán and a back 4 of Jules Koundé, Diego Carlos, Jesús Navas and Marcos Acuña, with Yassine Bounou as the main goalkeeper.

Lopetegui’s system relies on a fast build-up during the offense and rapid, direct passes to the forwards. In addition, it should also be noted that Sevilla like to play possession-based football, averaging 58.6% possession so far this season. Sevilla initially start off with a standard 4-3-3 formation however as the game progresses the formation manifests to a 3-4-3 formation.

The fullbacks (Navas and Acuña) are typically very attack-minded players, which means that Lopetegui instructs them to play the role as the wing-backs for extra attacking presence. This ultimately means the holding midfielder, Fernando or Nemanja Gudelj has to drop back, playing as a temporary centre-back. 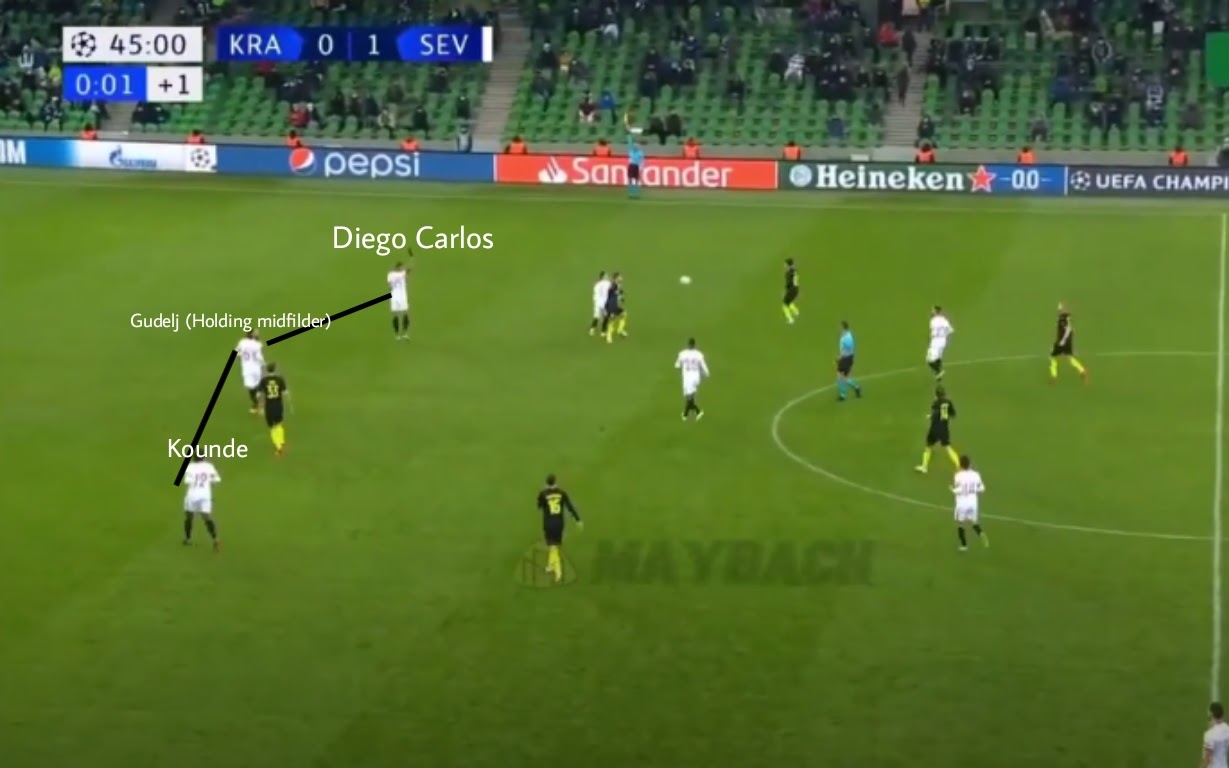 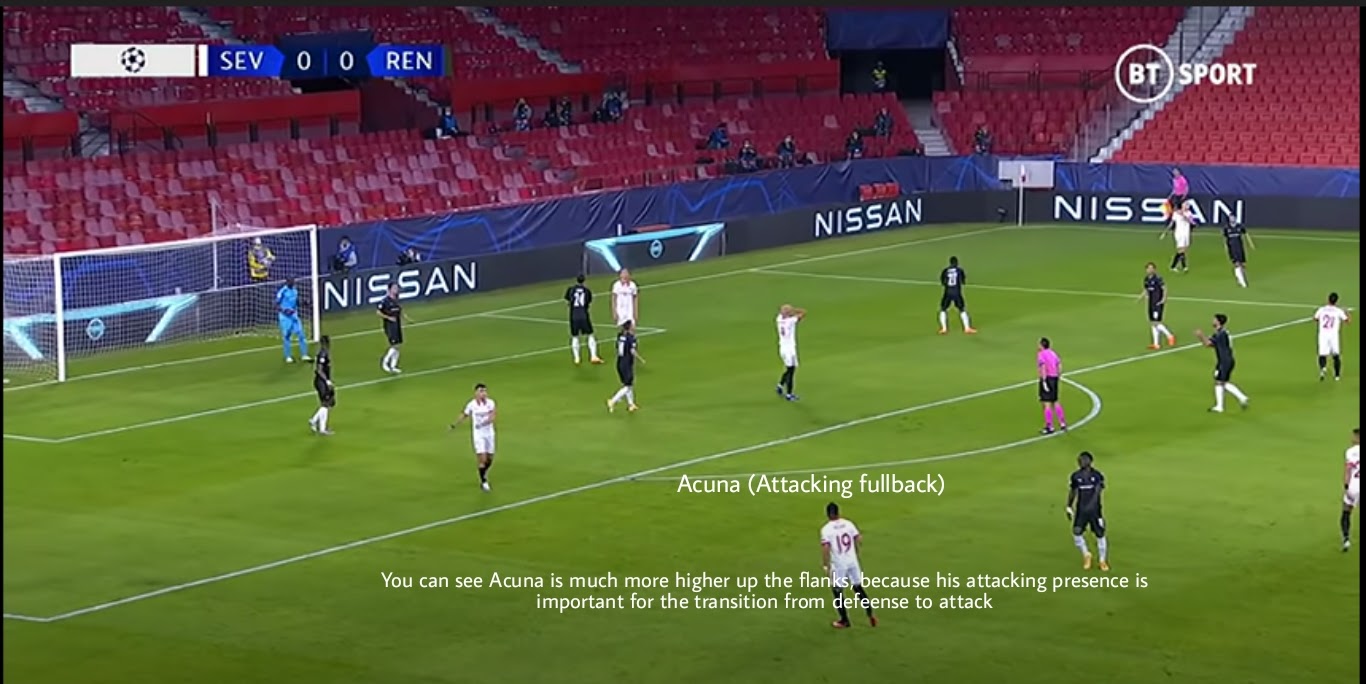 Lopetegui tends to allow the two wingers, Gómez and Suso to cut in, essentially playing the role of an unorthodox winger (it should be noted that Lucas Ocampos will challenge for a place in the starting line-up after his return from his ankle injury). This generally gives the two wingers the capability to shoot from a certain angle using their weaker foot.

Furthermore, Lopetegui instructs the main centre-forward En-Nesyri to drift wide. The Moroccan can play as a wide forward, playing as the target man, making Sevilla’s play less predictable. Either one of the wings relocate more centrally, essentially playing as a second striker, where they have an opportunity to get the ball to them in the box and shoot.

It has been a topsy-turvy career for Lopetegui, both as a player and as a manager. Having failed to cement a starting spot between the sticks at Real Madrid and Barcelona, his best spells as a goalkeeper came at Logroñés and Rayo Vallecano. For the first time ever as a manager, Lopetegui is marrying consistency with success on the pitch, recently becoming the longest-serving Sevilla manager since Unai Emery. At 54 years of age, it appears Lopetegui has finally found his niche in Andalusia.