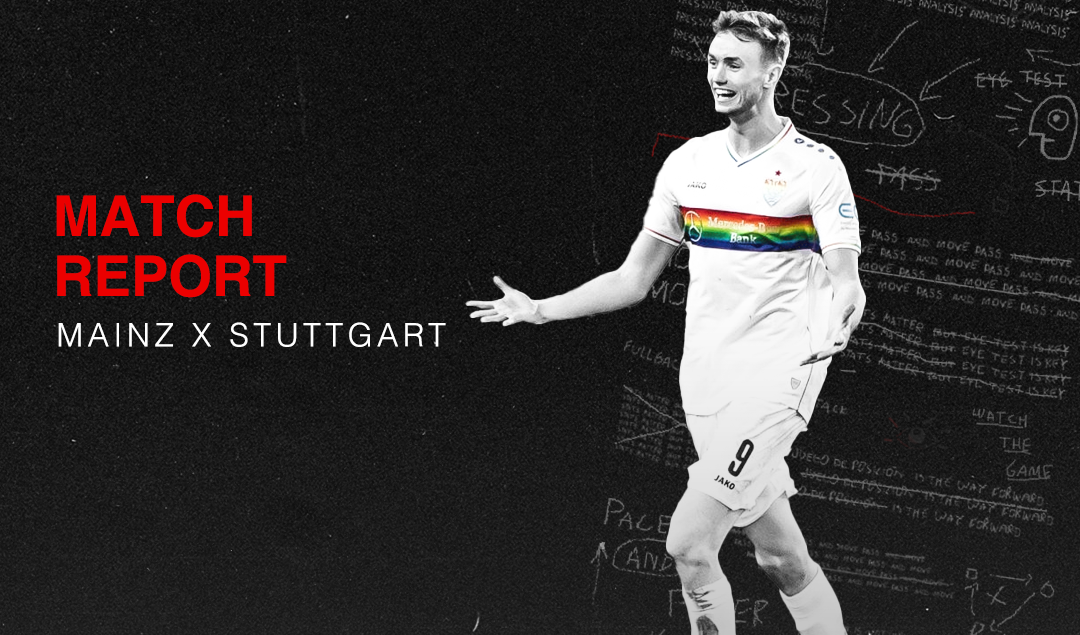 To kick off Matchday 19 of the 2020/21 Bundesliga campaign, relegation stragglers Mainz paid a visit to Baden-Württemberg, where they would take on Stuttgart at the Mercedes-Benz Arena. Since earning promotion to the top flight last season, Die Schwaben have been one of the Bundesliga’s revelations, having taken points off the likes of Borussia Mönchengladbach and Borussia Dortmund. On the other hand, Mainz faced an uphill battle after parting ways with star striker Jean-Philippe Mateta, who joined Crystal Palace on loan with an option to buy.

Pellegrino Matarazzo had his young Stuttgart team pressing in their usual 5-3-2/3-5-2 off the ball with 22-year-old Nicolás González in the 10. Target man Sasa Kalajdžić played slightly to the left up front, with Gonzalo Castro (substituted for Philipp Forster after 25 minutes) also playing in the forward line off the ball. On the ball, they formed more of a 3-4-2-1 shape, with González and Castro acting as two number 10s. Similarities of their structure, on and off the ball, can be made to that of Graham Potter’s Brighton.

Stuttgart’s main pressing triggers were those we’ve become familiar with – wing back pressing the opposition full-back when receiving the ball, cutting out the passing lane to the winger. The away side played with three imposing, physical centre backs, with Konstantinos Mavropanos particularly showing strong aerial dominance when defending crosses.

Having made his sixth start this season since joining on loan from Arsenal, Mavropanos showcased an impressively timed sliding tackle in the first half. Matarazzo instructed his centre backs to play a long ball up to Kalajdžić on occasions, with the aim of getting the team out and up the pitch, which is highlighted below. 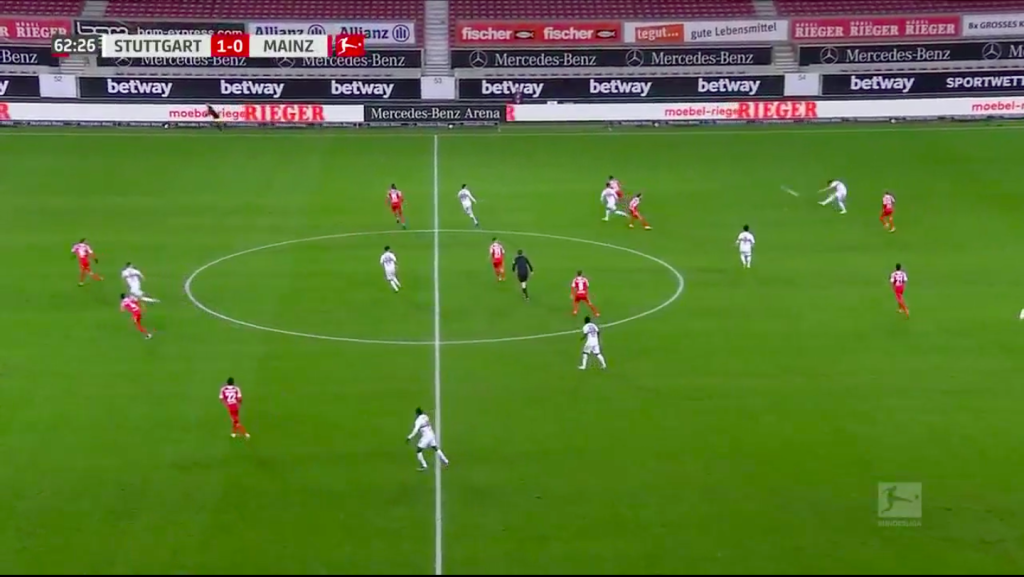 Mavropanos punting the ball up long in the aim to find target man Kalajdžić.

When building play, central midfielder Wataru Endo would often drop into the back line, with Mavropanos and Marc-Oliver Kempf shifting to full back. Wing backs Borna Sosa and Silas Wamangituka pushed further forward in the aim to provide an offensive threat, and that they did.

In the first half, Wamangituka was the main offensive threat for the home side, often making buccaneering runs down the wing and drawing in fouls. Wamangituka forced a first-half booking for Mainz defender Moussa Niakhaté and even had Mainz doubling up on him at times. Whilst he often came inside to drive attacks, on the opposite side, Sosa stayed wide and provided a real threat with his delivery from the left, always looking to find target man Kalajdžić with his crosses.

Stuttgart were however sloppy in the first half, particularly in the build-up, with many unforced errors leading to some half chances for Mainz. Matarazzo’s side did have the majority of possession in the opening 45 minutes but failed to create any clear chances, with the closest being a teasing delivery from Sosa aiming for Kalajdžić, which was well defended from Mainz.

This only foreshadowed what was to come in the second half, as Stuttgart opened the scoring 10 minutes after the restart, following a superb cross from Sosa allowing Kalajdžić to head home – a clear instruction implemented by Matarazzo. This was the Croatian wing-back’s 4th assist of the campaign – a team-high.

Mainz did very nearly respond quickly however after Karim Onisiwo’s header hit the bar as Stuttgart were caught sleeping from a set-piece. However, Stuttgart then came to life and started creating more opportunities, bursting forward in a 3-1-4-2 shape, with Orel Mangala joining the attack whilst his partner, Endo, sat back (shown below).

And just like Sosa’s first-half threat paid off, Wamangituka’s did too, after a brilliant solo goal from the exciting 21-year-old. The Congolese talent showcased his frightening speed and power, shrugging off his man and finding the net from the centre of the box – his 11th league goal of the campaign. He becomes the first Stuttgart player to score 11 goals after the first 19 games of a Bundesliga season since Fredi Bobic, 24 years ago in the 1996/97 season. 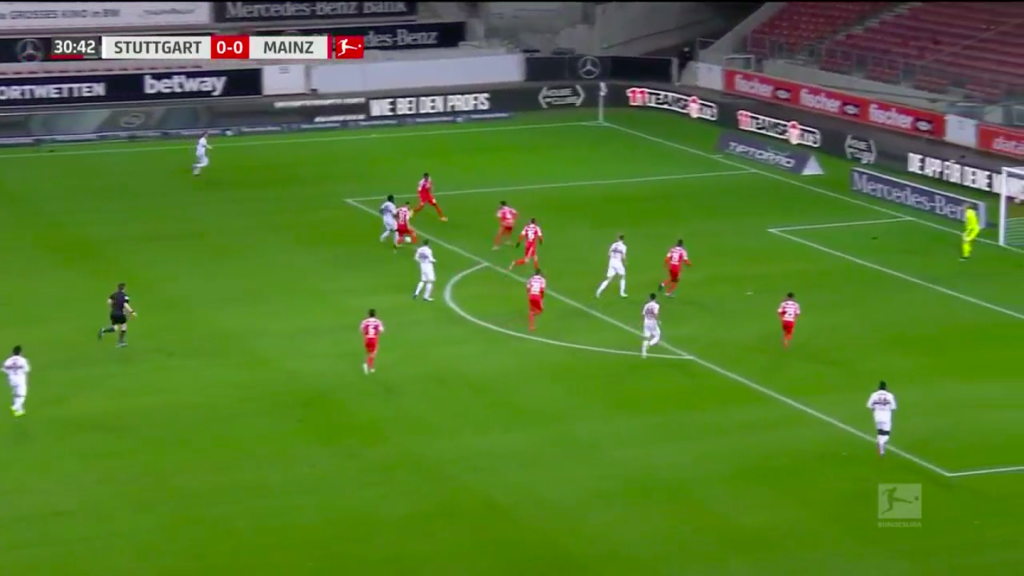 Matarazzo’s men found it comfortable to see out the game from here, against a Mainz side who really struggled to threaten at all in the second half. Stuttgart’s much-needed win keeps them sitting firmly in mid-table in 10th, six points off the European places.

Despite a sterile first half, Stuttgart showed in the second half the array of exciting young talent they have within their core. Silas Wamangituka (21) and Borna Sosa (23) provide immense attacking threat out wide, whilst Orel Mangala (22) and particularly Nicolás González (22) provide real technical quality, which Pellegrino Matarazzo will certainly be looking to build on.