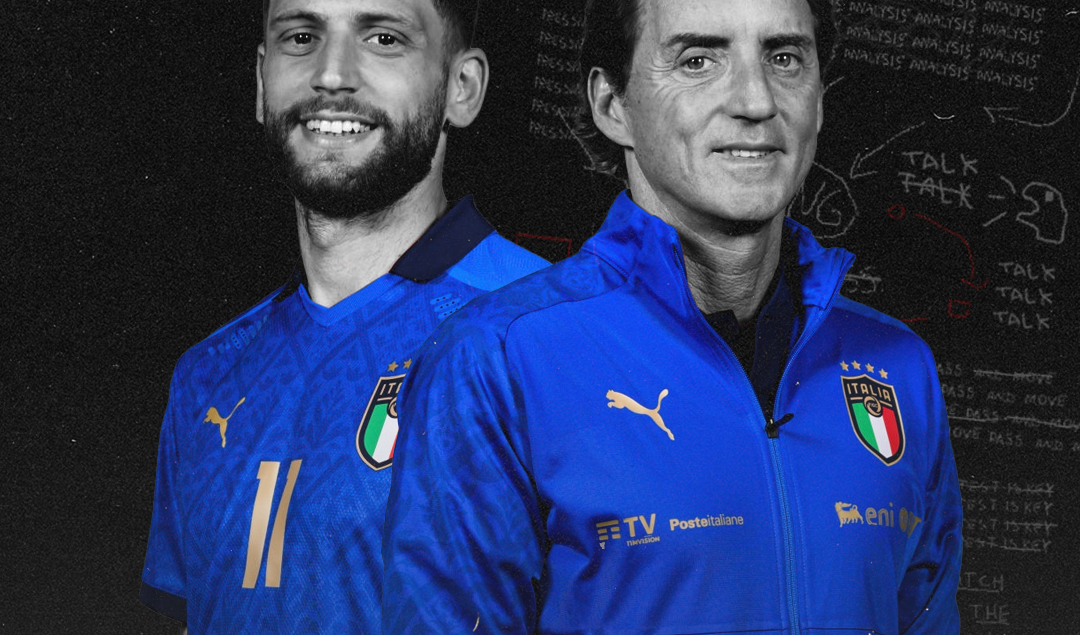 After losing the World Cup in 2018, Italy is back with a bang with strong team play and better tactics. The improvement is observed in the team with several changes in the attacking, defense, and formation of the team.  Till now, Italy has been unstoppable and won 30 matches with 11 clean sheets.

Along with that, in the past nine matches, Italy gained 20 goals. Competent players like Lorenzo Engine, Ciro Immobile, and many more are the reason for the impeccable performance of Italy. Along with that, head coach Roberto Mancini has gained the faith of the countrymen with a strong build-up.

The Italian team plays in the formation of 4-3-3 with goalkeeper Gianluigi Donnarumma at the goalkeeping area. He is further supported by Leonardo Bonucci, a strong defender of the team.  The build-up signifies that their right-back mostly concentrates on pushing the ball from the back rather than flying the ball from the left-back.  When the team comes into the attacking mode, they form a 3-2-4-1 shape.

To that, Nicolo Barella helped to complete the diamond shape with Insigne. Ciro Immobile stands strongly at the center that gives a center point for the team as a center forward. While on the outer right side is handled by Domenico Berardi and Leonardo Spinazola. Then Insigne handles the ball by sliding inside for smooth play.

The Italian team has recorded huge progress in their attacking strategy. They give two threats during their attack. Firstly, they build a threat by making an attack and their next threat comes from counter-pressing when they begin to lose their control. For attacking Italy took all the ten outfielders and exploited their opposition with their switches and movements. The team’s vision about the left by combining two players to move and pass accordingly is extraordinary. When the opposition makes a plan to stop the left-sided attacks, they switch to the right.

Italy has gained possession of 59% in the past matches. Due to skillful attacking tactics, they didn’t require much of a defending strategy. Although the defensive performance of Italy has been exponential whenever required. Leonardo Spinazzola stays at a high position which forms a 3-5-2 shape.

From there, Berardi maintains an upright position at the right whereas Insigne remains high near Immobile. With strategic positioning and coordination, Italy has remained undefeated since the last 30 matches. If they remain consistent in switching between defense and attack then, it will be difficult for the opposite team to score.

Notable players like Domenico Berardi and Leonardo Spinazzola have emerged as emerging stars. Their creativity and tactful transition covering both defense and attack can make Italy win the Euro Cup 2020. Also, understanding the opposition’s weakness and exploit strategies can be a lesson to other teams as well. These factors make Italy a strong contender to win the Euro Cup 2020.