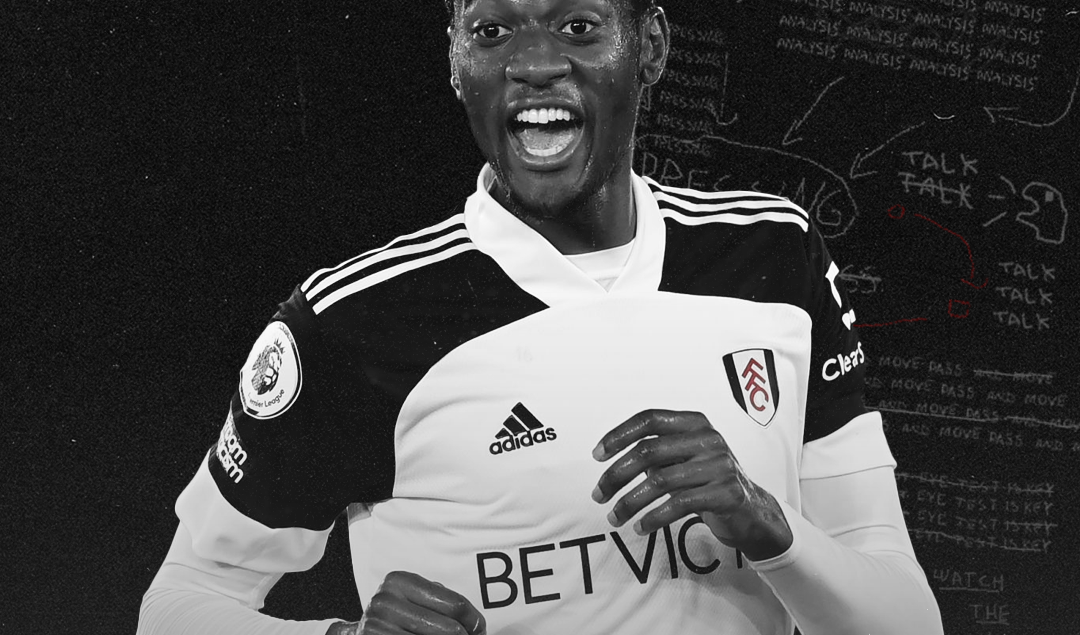 Despite playing in a Fulham side that got relegated from the Premier League, Tosin Adarabioyo was one of the few shining lights in an otherwise grim 2020/21 season. The towering centre-back was a regular for The Cottagers, starting 33 out of the 34 Premier League games he was available for. However, as he approaches his 24th birthday, the fact remains that Tosin has never made a senior national team appearance, absurd for someone of his qualities.

Tosin Adarabioyo is a modern-day centre-back. Quick and pacy (for someone his size), good on the ball with the ability to pass and carry the ball out of the defence and toward the halfway line. And in many ways, Tosin is also a traditional centre-back, not afraid to throw himself at opposition shots, get into rough challenges and take one for his team when the need arises.

Some of his other attributes include his ability to dribble which is a product of him being comfortable in possession. Tosin completed 79% of his attempted dribbles in the Premier League last season. He has a high football IQ which enables him to read the game effectively, making crucial interceptions and breaking up potentially dangerous attacks.

To give you an idea of how good Tosin really is, his 42 interceptions are two more than Virgil Van Dijk got in his historic 2018/19 season where he won the PFA Player of the year award. He played five fewer games than Van Dijk did that season but Tosin has two more successful dribbles and a higher dribbling success rate.

He continues to compare favourably to Van Dijk’s best-ever season. He made 193 clearances, six short of Van Dijk’s total in five fewer games. However, in his style of play, Tosin Adarabioyo mirrors Fikayo Tomori but that’s not where the similarities end. Tosin is a poor man’s Tomori (with all the love in my heart), he shares similarities in his background and gameplay with the former Chelsea centre-back.

He has represented England at youth level and has hopes of becoming a full England international just like Fikayo Tomori. However, the only difference is that Tosin is yet to get his chance with the Three Lions, unlike Fikayo who has made an appearance in Gareth Southgate’s team. If Adarabioyo hopes to have a fulfilling national team career, he needs to do the exact opposite of what Tomori did when he opted to play for England in 2019 ahead of Nigeria.

The fact that Fikayo Tomori has only played six minutes of football for the English national team should be enough to help Tosin make up his mind. Fikayo was brought on in the closing minutes of a 4-0 win against Kosovo in the Euro qualifiers and that remains his only English cap. Tomori also failed to make the England squad for Euro 2020 ahead of Ben White and Conor Coady despite being one of AC Milan’s best players.

The Nigerian team is also stacked with options in centre-back right now. William Troost-Ekong, Leon Balogun, Semi Ajayi, Kenneth Omeruo, Kevin Akpoguma and Chidozie Awaziem are some of the regulars in the last two years. Choosing to represent Nigeria is not a guaranteed path to national team success for Tosin Adarabioyo but he will have a fair chance to earn his spot in the team, which is more than Tomori ever got.

A 6ft 5 inches tall 23-year old centre-back of Premier League quality should be playing competitive national team football. Tosin Adarabioyo is too good to sit back and keep hoping his English opportunity comes. He’s already good enough to be a starter for the Super Eagles and if he continues to develop at this rate, he could cement his place in the squad for the next decade, which means at least 5 international tournament appearances.

From where I stand, the choice seems obvious, a no-brainer. Nigeria is one of the best teams in Africa, so Adarabioyo gets to play alongside other top players. And the current squad has a unique vibe to it including a strong British-Nigerian presence which will help Tosin feel right at home and settle in quickly.

However, please don’t get it twisted, this is not a plea on behalf of Nigeria, it is one for Tosin Adarabioyo. While both parties could use one another, the Super Eagles will be fine either way. It would be painful to watch another good English-Nigerian player waste away his international career like Tammy Abraham has done so far because ‘God Save the Queen.’