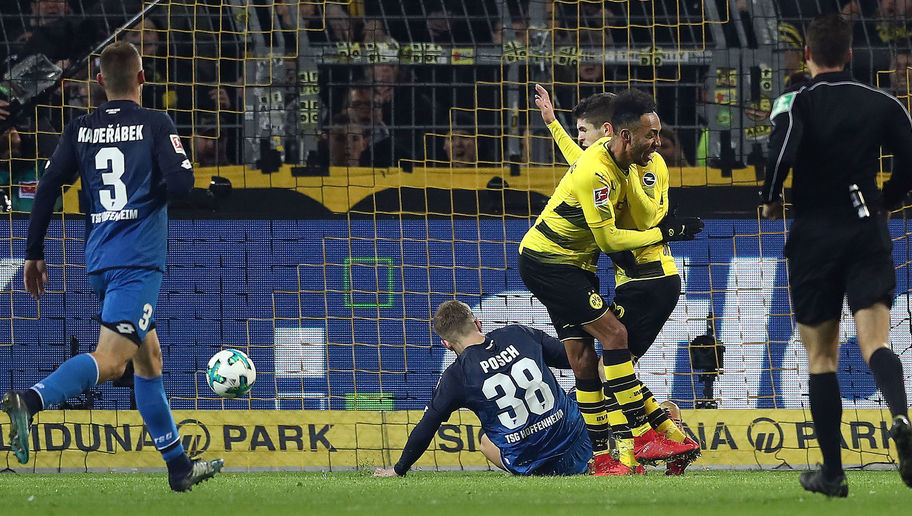 With the Borussia Dortmund hierarchy deciding Peter Bosz’ departure as necessary for BVB achieving their desired level of success, Peter Stoger was quickly brought in to manage Die Schwarzgelben. Despite some considering the swap of bosses a downgrade, with Stoger’s far more compact approach compared to Bosz’ more attractive possession-based style, the new gaffer’s initial impressions have been positive, with a 2-0 win away to Mainz. In his second match in charge, he will face the much-spoken of Julian Nagelsmann’s Hoffenheim, in a match of much significance in Bundesliga’s tight top six race for Champions League spots. 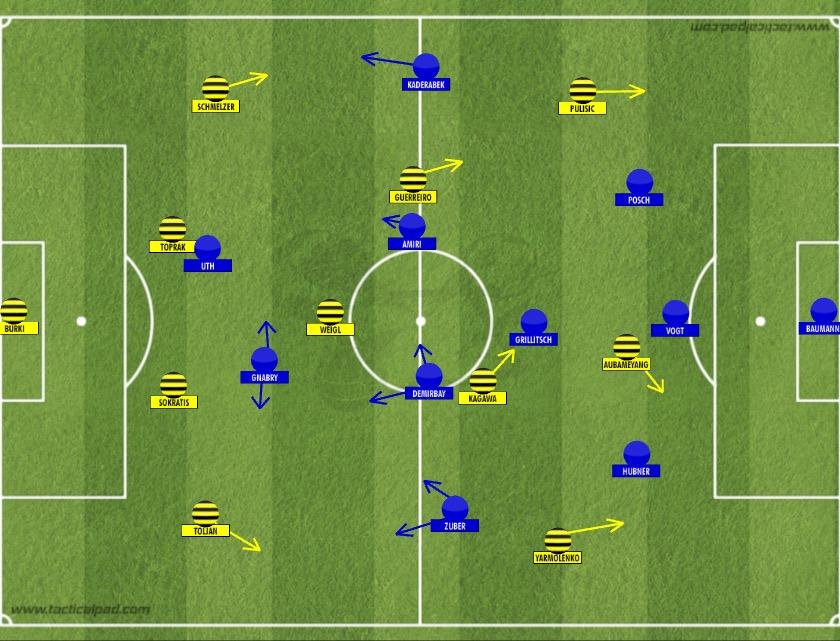 Stoger utilised a 4-1-4-1 formation. Burki was in goals, with Toljan, Sokratis, Toprak and Schmelzer protecting him as a back-four. Weigl was the pivot, with Guerreiro as a left interior and Kagawa a slightly right based central-midfielder. Yarmolenko and Pulisic played on either wing. Pierre-Emerick Aubameyang the 9.

Hoffenheim played their usual 3-1-4-2 type formation. Baumann the goalkeeper. Posch and Hubner were right and left halfbacks, with captain Kevin Vogt a libero in the middle of them. In the absence of usual pivot Dennis Geiger, Florian Grillitsch played in his spot. Kadarabek and Zuber played as right and left wing-backs, with Amiri and Demirbay 8’s. Up front was Uth and Gnabry.

After a number of months of an extreme focus on spacing and wide occupation under Bosz, Dortmund have now appointed a new type of boss. In this match, we saw the beginning of Stoger’s implementation of a compact 4-1-4-1. This defensive shape and performance from BVB was promising, as it made penetration and progression from the early phases of Hoffenheim’s usually excellent build-up rather difficult.

With Nagelsmann’s H04 typically being well spaced and using rotations and other actions in order to allow their 8’s to receive in high, attacking midfield positions, it was key for BVB to block this progression. On paper, the 4-1-4-1 with wingers with potential to move inside looked ideal for a side looking to block the opposition’s access to central-midfield spaces, and in the match itself, this was true. In H04’s phase one and two, BVB allowed them to have relatively unchallenged possession and horizontal circulation between their back-three. Here, BVB set-up their 4-1-4-1. Kagawa and Guerreiro would use their cover shadow to prevent passes to Demirbay and Amiri, who would push high and slightly wider in their halfspace. Yarmolenko and Pulisic, the wingers, would tuck slightly inside to support the 8’s in their defensive actions, but also remain wide enough to prevent Kadarabek and Zuber, Hoffenheim’s wing-backs, from receiving simple passes outside the BVB block from where they may be able to progress. Aubameyang would move horizontally with the circulation, to prevent H04’s ball-carrier dribbling into midfield. Whilst doing so, he would use his cover shadow on Grillistch, who mostly moved horizontally to support the ball-carrier, and if he was a in a good position to receive (ie- behind Aubameyang but also in a position where Kagawa/Guerreiro didn’t have defensive access) Aubameyang would drop onto him and mark him out this situation. At pivot Dortmund Weigl was based a couple of yards deeper than the rest of the midfielders, simply covering the 10 space, unless a diagonal lane from H04 CB to far-CMF had potential to open. In this case he would step forward to close it, forming a situational 4-5-1.

Stoger’s 4-1-4-1 was very effective in preventing consistent, strong Hoffenheim access to their 8’s in good positions. Nagelsmann’s men were mostly restricted to circulation between their back-three, with the technically excellent Vogt even unable to do much from his libero role to penetrate from the early phases directly to strong midfield spaces.

Hoffenheim had to resort to alternative solutions, as passes directly from the early phases were almost impossible. In order to be compact, and due to Hoffenheim posing little to no threat high up on the wings, both BVB’s full-backs and wingers tucked into relatively narrow positions. As a solution to their build-up and progression struggles, Hoffenheim played some high balls to their ball-far wing-back positioned outside the Dortmund block. Hoffenheim attempted to access their near-8 from here, with the receiving wing-backs often playing first time knockdowns to the 8 as BVB adjusted to H04 receiving outwith the block.

Perceived as a general weakness of typical three/five-at-the-back systems, only having one guy covering each wing due to either being unable to do so or being instructed not to, Peter Stoger’s Borussia Dortmund attempted to use their wing play and dynamics to exploit Hoffenheim’s lone wing coverers.

As Dortmund moved in Hoffenheim’s half, H04’s wing-backs were based quite deep. To add to their deep positioning was that they followed BVB’s wingers as high/deep as they moved vertically. With the high positioning of Yarmolenko/Pulisic, Kadarabek and Zuber often found themselves pinned in deep full-backs positions. This left pretty much the whole depth of the wing bar the last line free.

Due to this, BVB were able to circulate and move out to wide positions just inside Hoffenheim’s half with much pressure for a few seconds, as Hoffenheim were forced to adjust and attempt to prevent simple BVB progression here. These few seconds were vital, and allowed Dortmund to support the wing and establish strong structures out here. This often meant overloads in short spaces, which allowed for nice, difficult to press combinations. Positioned wide, just inside the half would be the full-back Toljan/Schmelzer. As they received in this deep, wide position, the near-interior would usually move into the halfspace. This was particularly effective on the left, as Raphael Guerreiro’s wide left-interior role meant he didn’t have to cover a large distance to support Schmelzer.

The near-winger could choose to keep the wing-backs pinned on the last line, or move slightly deeper and onto the touchline, to create a greater overload. When on the left, Kagawa would sometimes even move towards the right, to provide an outlet to connect with the underloaded right following an overload and combination on the left.

The early days of Peter Stoger’s Dortmund look pretty strong. Following a period of vulnerability under Peter Bosz, Stoger has clearly placed an initial priority on improving the defensive weaknesses. In a team with plenty individual talent, as long as their new boss allows these players to flourish, whilst solidifying the side, their should be at least some short-term improvement to Dortmund, as is commonly the case in defensive-focused coaches at new clubs.

Though Hoffenheim disappointingly came away with no points, their performance was not awful despite encountering some early issues. The typical plan of Nagelsmann was not so effective against the tough to break down block of Dortmund, but the solutions created were interesting and at times quite successful.

Rather unfairly, the only difference between the sides in the end was a late Christian Pulisic goal in an otherwise absolutely even match.