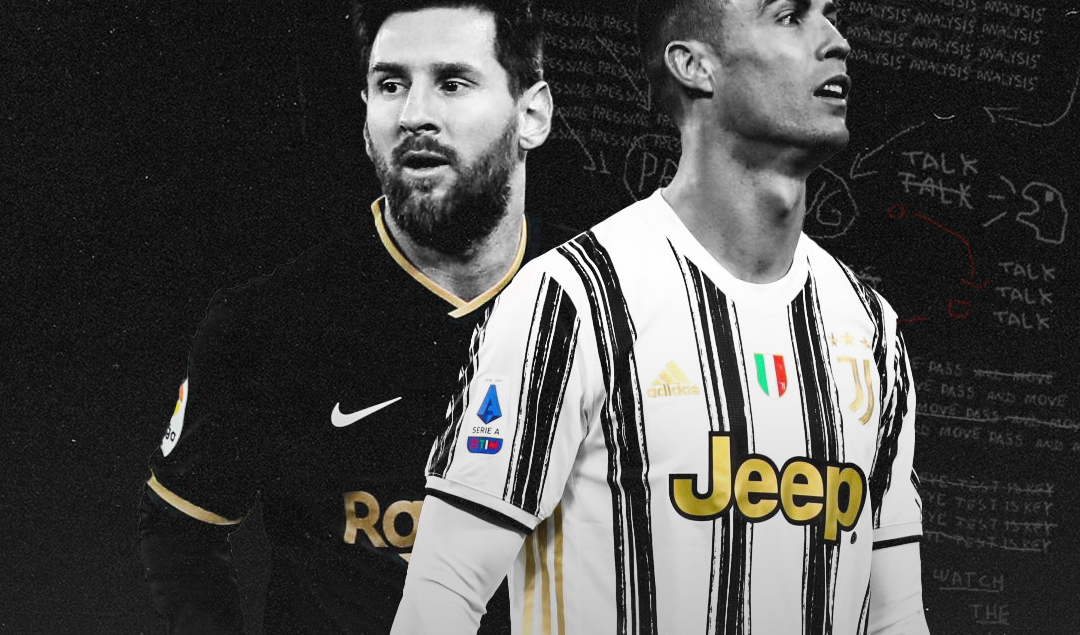 Sporting rivalries define generations. Athletes at the peak of their powers grip the world as it watches intently to see who is victorious as they collide. In years gone by generations have bore witness to Mohammed Ali-Joe Frazier, Aytron Senna-Alain Prost, Roger Federer-Rafael Nadal telling story after story of the great matchups of the past.

Spanning the last decade and a half Cristiano Ronaldo and Lionel Messi have dominated football, records shattered, dizzying heights set, catalysts for Real Madrid and Barcelona to assert a stranglehold on European football. Both names will be written in history synonymous with the other, Ronaldo is seldom mentioned without Messi and vice versa. What makes the two players so outstanding is the seismic achievements and statistics are a normality. Anything Leo can do Cris can do too. Sublimity for the two stalwarts is just another day at the goddamn office.

Madrid and Barcelona have shared six of the last ten Champions League titles. The 2010-20 decade will be remembered as the Ronaldo-Messi years, witnessing them subliminally trade blows, one-upping each other, the rivalry fuelling and increasing their maddening consistency. Both are self-aware of the other’s talents, the fervour for the duel between the pair cranked up the performance levels, it is tempting to ponder whether without each other, either would’ve pushed themselves to the freakish prowess they possess. Ronaldo and Messi have been in Super Saiyyan mode for years.

For 9 years we were lucky enough to see the two go at each other every year, under the lavish narrative of Spain’s duopoly of Real Madrid and Barcelona colliding. Times have changed however since Ronaldo’s move to Juventus in 2018. La Liga is the sole league left with an exhilarating title race as the season finishes, Diego Simeone’s Atlético Madrid have faltered after giving up a 10-point lead at the top.

Could you imagine a Ronaldo-Messi duel in El Clásico on Saturday evening? Ronaldo leading an aging Los Blancos side battling through with guile and Messi settling down after the hullabaloo of his attempted exit in the summer, with a crop of promising youngsters in tow for a crucial game at the top. It’s like a brilliant TV series that has lost one of its main cast but continues, still superb and enticing but just not the same. No longer can we tune in to see who will have their say on the rivalry.

Both men used the fixture to showcase their astronomical talent, having the knowledge and providing the consistent reminder they are leagues apart from anyone else. As bizarre as the circumstances are with the world in 2021, the same can be said of the scenarios both legends find themselves in. Ronaldo and Messi are at a crossroads and for once in their careers, the respective clubs they are at of Juventus and Barcelona look to be in the midst of rebuilds rather than seem formidable enough to be shoo-ins and favorites for major honours.

Though Ronald Koeman has done a stunning job turning La Blaugrana around this year, as well as turning the Argentinian’s mood since the sulk of him wanting to leave Barcelona, it has been highly documented that Messi is at odds with the Barcelona hierarchy. His future still hangs in the balance despite him being rejuvenated. The pain was evident in his eyes in the Goal interview, he couldn’t fathom that the club that raised him and gave him the opportunity to be one of the greats is locking him down when he sees their relationship coming to an end.

Messi constantly referenced the Champions League in the interview, it has been five years since he lifted the famous ‘big ears’ trophy. Messi has won two league titles since the Barcelona UCL win, but just like the rest of us, he sees the Champions League as the pinnacle of football. Capitulation in Rome, Liverpool, Lisbon and just recently PSG has exasperated the great Argentine, you sense he saw Ronaldo’s relentless pursuit of Champions League glory with trepidation as a factor of him wanting out of Barcelona. Since Messi last clinched a UCL title Ronaldo has added two, top-scoring in both UCL campaigns.

Niki Lauda once said ‘having an enemy is a blessing’ Messi saw his great enemy surpass him by spearheading Real to Champions League history whilst he looked around and wearily foresaw the Catalan giants crumbling. Ever since the MSN Champions League win under Luis Enrique, Ronaldo and Madrid replied by winning an unprecedented 3-peat. Messi may be the less boisterous one but above all he has the same undeniable need to be the best, the 3-peat from Real had Leo questioning his club. The fact is from the age of 28-33 commonly seen as a peak of a player’s career, Messi wasn’t appeased by Barcelona.

The messy fallout that has seen former president Josep Bartomeu leave Barcelona outlined many issues off the pitch that irked the little genius, no less discovering the club are 1 billion euros in debt, or seeing his compatriot Luis Suárez leave for free to rivals Atlético. Messi referenced how Bartomeu had constantly lied to him, as he frequently mentioned his desire to leave with Bartomeu seemingly ignoring his pleas resulting in the now infamous burofax that Messi sent to inform the club of how serious he was about leaving. Things got so ugly that the Barca forward’s eye-watering contract was ‘leaked’ as top officials at the club tried to paint him in a bad light, but frankly, Bartomeu’s presidency has left La Blaugrana in financial turmoil.

Then there is the case of Ronaldo. Similarly, he had a frosty relationship with the club president towards the end of his Madrid days, stating that Florentino Pérez no longer thought of him as ‘indispensable not exactly a wise move with the success Ronaldo had been a part of. CR7 actually took a slight pay cut to join Juventus in Serie A and stated he wanted a ‘new challenge’ ultimately, Juventus were romping to titles pre his arrival, he was acquired to be the X factor to drive a club to fulfill the obsession with the Champions League, seemed like a great fit.

Ronaldo’s timing of moving to Juve now looks incorrect. The Bianconeri are not a team of proven world beaters but are a team looking to become world-beaters. Just like with Messi at Barcelona, the future looks bright for Juventus with thriving youngsters like Weston McKennie and Federico Chiesa coming through whether Ronaldo stays around to wait for them to flourish is the key examination.

His goals to game ratio is hardly a record you can argue with as he is the league’s top scorer and is still deadly in front of goal. He is a proven goal scorer and more of a rigid forward these days rather than offering a blistering threat from the flanks as in years gone by. You could argue Juve look more fluid without him in the games he has played this year.

Contrary to popular belief though, Ronaldo is more involved in Pirlo’s system, he links up play well and can drop deep to create chances. During his final days at Madrid compared to now he has a higher rate of touches and chance creation. This defeats the notion that Ronaldo is just a really good center-forward these days and means it is very plausible Ronaldo still has a massive role to play in this Juventus side.

Although Messi has been in more of a war off the pitch with his club, his ability and role on the pitch will seldom be questioned for a few more years. Messi is the footballing genius with god-given talents, spellbinding footballing wizardry that offers a more rounded total football threat. He is just as much of a genius off the ball and in and around the box as well as in it.

Ronaldo has had to morph himself into a machine, a ruthless finisher that has admirably had to jump back into the science lab tweaking his game. Ronaldo is the footballing predator, Messi is the footballing alien. The Portuguese’s contract runs out in June of next year, it will be fascinating to see where Juventus are when June 2022 rolls about, and how satisfied Ronaldo is with the Bianconeri.

Three managers in three different years have found it difficult to reach the later stages of the Champions League, Ronaldo will have to ponder whether Juventus will be in a place where they can seriously threaten when it comes to the summer of 2022. No less deciding as to whether the team’s function will be to aid him in his continuously brilliant scoring rate, or go for a different approach without Ronaldo as the centerpiece.

Essentially, COVID-19 has strangled even the most elite clubs and it isn’t a foregone conclusion to decipher where if anywhere Messi or Ronaldo could move to. Obviously, the two clubs in Europe powered by Middle Eastern money in Man City and PSG have unquestionable finances to take either player. Messi’s relationship with Pep Guardiola is notable, and it would be fascinating to see him in England. Ronaldo may be best suited to a club with stars like Kylian Mbappé and Neymar to fill his quench for goals, but both may be uncomfortable with not being the main stars.

However, with Ronaldo earning around 655,000 euros a week and Messi almost double with an astronomical 1.5 million per week, wages might be an issue. Especially in the case of Messi where Man City already ruled out a move for him as it may upset the rest of the dressing room and frankly those wages will be stifling for any club. Ronaldo has flirted with a return to Madrid, but once again coronavirus has offered a looming sense of mystery in terms of finances where Madrid may have to wait but also offload to get Ronaldo and the gang back together.

We may see a case unless things change where out of convenience they both stay put, Juventus vehemently backed Ronaldo staying recently as club director Pavel Nedved stayed recently, he has always been treated as the messiah at Juventus. Former Barcelona director Joan Laporta is back at the helm and no doubt top of his list will be convincing Messi to stay.

In both cases, the ability of Ronaldo and Messi haven’t necessarily waned but due to background politics and clubs having an inability to build amply around them, means it seems less and less likely we see the two superstars battle it out as frequently as we did before for football’s biggest prize, at least for some time. Perhaps because of the sheer enormity and pressure that arrives monetarily and on a personal level that comes with such players, it also puts a drain on the club if you can’t handle them correctly.

We can count our lucky stars we were able to see the rivalry in such mesmeric fashion, but with young stars like Kylian Mbappé and Erling Haaland emerging, a passing of the baton may start to take place. It could be the beginning of the end for the Ronaldo vs Messi matchup, it has been our pleasure to see it unfold, it will be equally as fascinating to see whether the end is nigh.