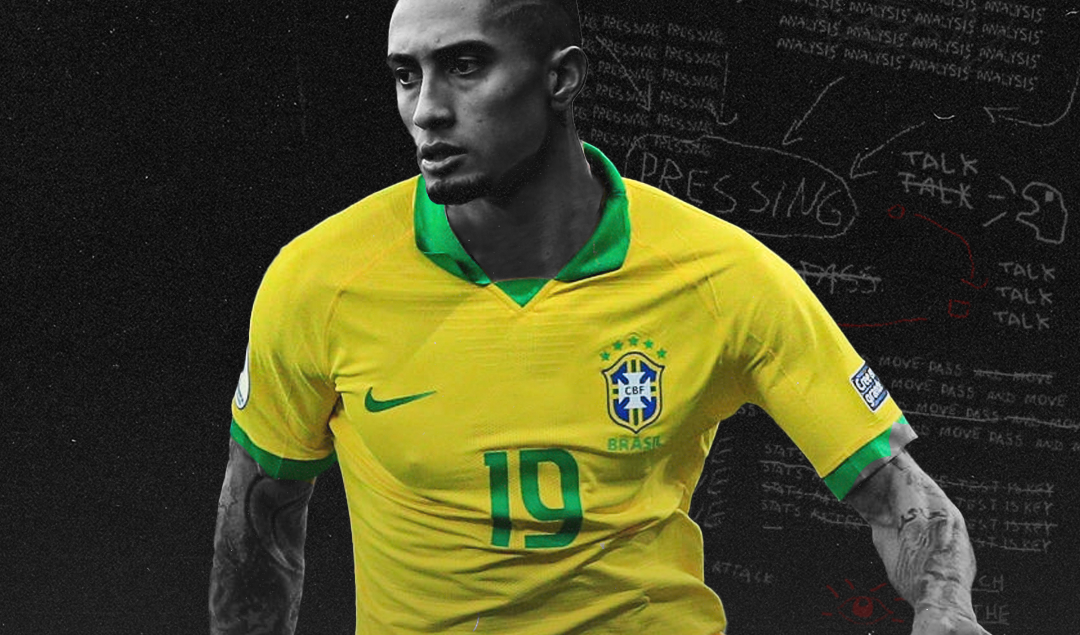 Although many wingers this season have contributed to their sides in terms of goals and assists, few can boast a real sense of unpredictability and excitement when they get the ball. For the natural sharpshooters deployed on the flanks like Liverpool talisman Mohamed Salah, attacking play can become fairly routine: hugging the touchline and using pace and a low centre of gravity to cut in-field onto his favoured left foot.

Whilst the fundamentals sound easy enough to defend against, the reality is often very different. Time after time we see the Egyptian ghost inside a full-back before picking out the top left-hand corner. You may know exactly what he is going to do before he does it, but the chances are by the time you have reacted, Salah is already wheeling away in celebration. Arjen Robben seemed to score the exact same goal throughout his career. Yet in the Premier League, there are a few players who when they pick up the ball, you watch from the edge of your seat because you don’t quite know how the passage of play will unfold.

It’s no coincidence that Newcastle United endured their recent horror run as France star Allan Saint-Maximin could only watch on from the sidelines. How the ball sticks to Saint-Maximin’s feet, in the same way that allows Aston Villa skipper Jack Grealish to glide past his man so effortlessly, when combined with a number of tricks and electric pace means that wherever the winger wants to go, he will do in a very entertaining manner.

Few players are able to combine this innate unpredictable flair with final product. For all the pace and power of burly Wolves winger Adama Traoré, the Spaniard has just one assist and no goals so far in 21 games this season. The same can be said for Arsenal’s Nicolas Pépé or Saint-Maximin’s Magpies teammate Miguel Almirón, but one winger who seems to have hit the ground running with both trickery and killer attacking instincts however is Leeds United’s Raphinha.

Leeds parted with around £17 million to bring in the Brazilian from French outfit Rennes, with Raphinha swapping Champions League football to join a newly promoted club back in the big time after a 16-year absence. With a number of supporters of the Ligue 1 side taking to Twitter to voice their anger towards the Yorkshire club at taking one of their prized assets, people were starting to take note of the seriously impressive business done by Marcelo Bielsa and Leeds’ Director of Football Victor Orta.

“We always saw a lot of potential in him,” explained a former Avaí youth co-ordinator to The Athletic. “There were two aspects of his game that I really loved: his ability in one-on-one situations and his finishing. He always scored a lot of goals. He was aggressive and quick, just a really, really good player.”

Impressive displays at the 2016 Copa São Paulo saw former Barcelona player-turned-agent Deco add the Avaí youngster to his client base before Raphinha was snapped up by Vitória Guimarães. Dominant displays for the side’s B team quickly saw him promoted to the first-team squad, where he set the Primeira Liga alight.

An explosive winger with an appetite for taking on his man, Raphinha would score 22 times in just over 80 appearances for Os Vimaranenses before heading south to Sporting CP. Domestic cup wins in the Taça da Liga and Taça de Portugal saw him excel alongside Bruno Fernandes, with the Brazilian then making the switch to Rennes in 2019. He helped Julien Stéphan’s side to a third-placed finish before his transfer to Leeds.

Initially used off the bench as the Porto Alegre-born winger got up to speed with Marcelo Bielsa’s demands, the 24-year-old showed glimpses of what was to come, before starts against Arsenal and Everton quickly cemented his position in El Loco’s first eleven. Raphinha’s long-range strike at Goodison Park proved enough for Leeds to take home the three points, with the powerful left-footed effort flying past a helpless Jordan Pickford in the Toffees’ net.

A stunning strike rounded off a typical Bielsa-ball fifth against West Brom. Lovely link-up play between Jamie Shackleton and Stuart Dallas saw the latter feed the ball into Raphinha in space on the right. Ghosting past Branislav Ivanović to the edge of the area, the Brazilian winger curled a superb effort into the top corner, with Baggies’ keeper Sam Johnstone a spectator.

Often used on the right, the naturally left-footed player likes to drift in-field onto his favoured side but is equally comfortable using his pace and trickery to dart past his full-back to the byline where he isn’t afraid of crossing with his right foot. This fearless nature with the ball has seen the former Rennes man complete 26 successful take-ons, with an impressive take-on success rate of 57.8%.

In recent games, we have seen his eye for the killer ball more and more. Hugging the touchline forces his man out wide before Raphinha likes to move more central still with his back to goal. There, in space, a great understanding with front-man Patrick Bamford or attacking midfielder Rodrigo allows an often inch-perfect first time through ball to be played into their paths; clear in Bamford’s stunner at Leicester City.

Bamford with a beauty! 😍

Whilst a pass accuracy of 74.9% isn’t one of the highest in the league, just under half of his 778 touches this season have come in the final third. 142 successful passes in this dangerous territory have meant the risk-taking winger has created 26 chances for his side.

One thing demanded by boss Marcelo Bielsa is a tireless approach when it comes to getting back in numbers. Whilst Leeds have struggled at defending set-pieces, their ball retention rate in open play and aggressive style of pressing has seen the side receive many plaudits. Raphinha fits the mould perfectly, with 59 ball recoveries, 57 total duels won and 17 successful tackles. For a player widely praised for his attacking prowess this campaign, these defensive numbers are impressive. 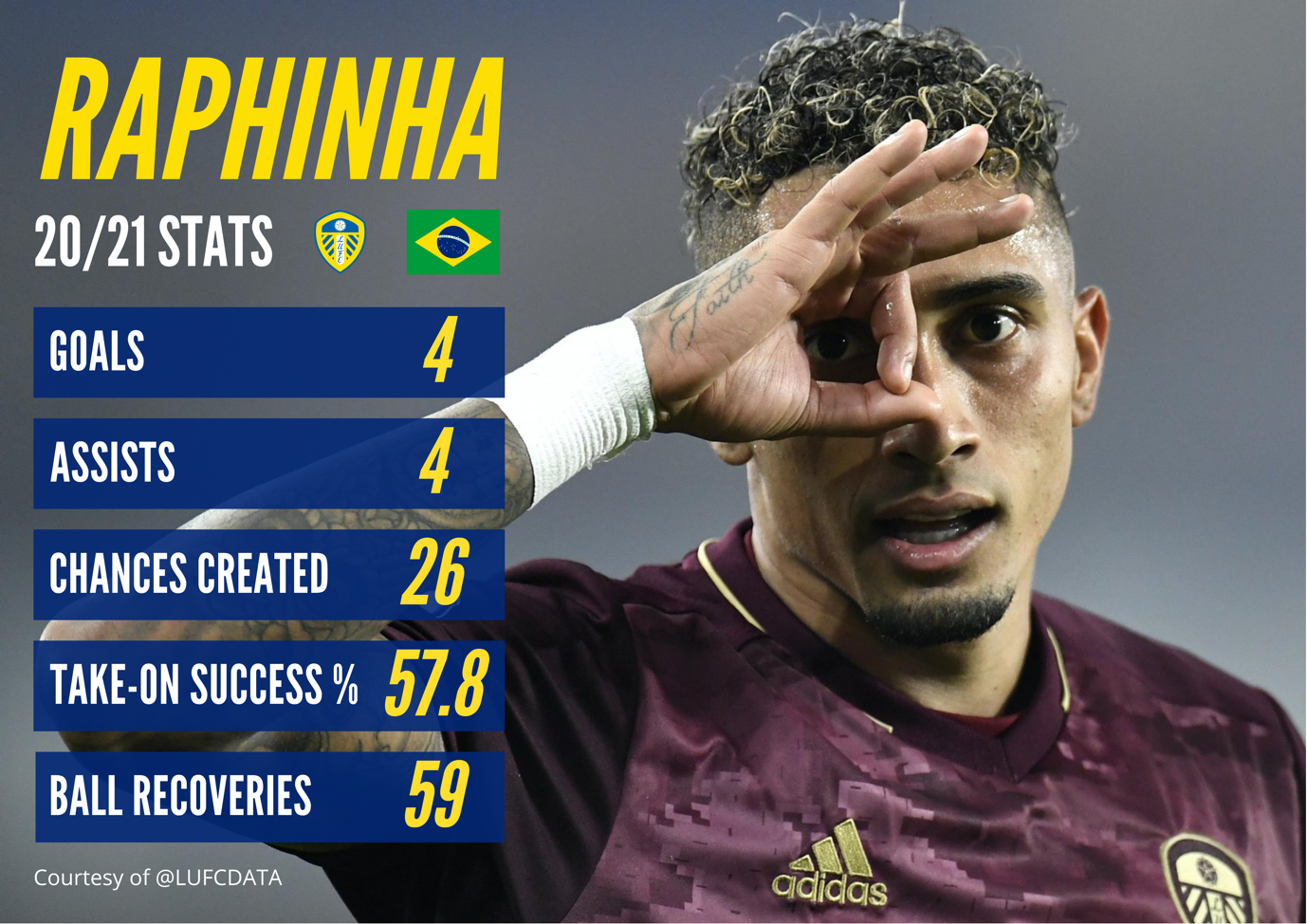 Regarded as one of the buys of the summer, should Raphinha continue his fantastic form then he will surely be on the mind of Brazil boss Tite. Whilst the world’s third-ranked side do have an abundance of young wingers to compliment the likes of Neymar, the Leeds star has that little bit extra over his compatriots according to Deco.

“In Brazilian football, I don’t think there is another left-footer with his traits,” he explained last year. “Raphinha is a warrior boy, with a difficult history, he still has a long career ahead of him. He’s winning everything with great desire, with much dedication. This is all very new to him.”

When Rennes fans acted so angrily towards the news that one of their star men was crossing the English Channel, Leeds fans responded with laughter and excitement. After starting life so brightly in the Premier League, it’s clear to see just why there was such uproar in Brittany. £17m for a player of Raphinha’s calibre was an absolute steal.