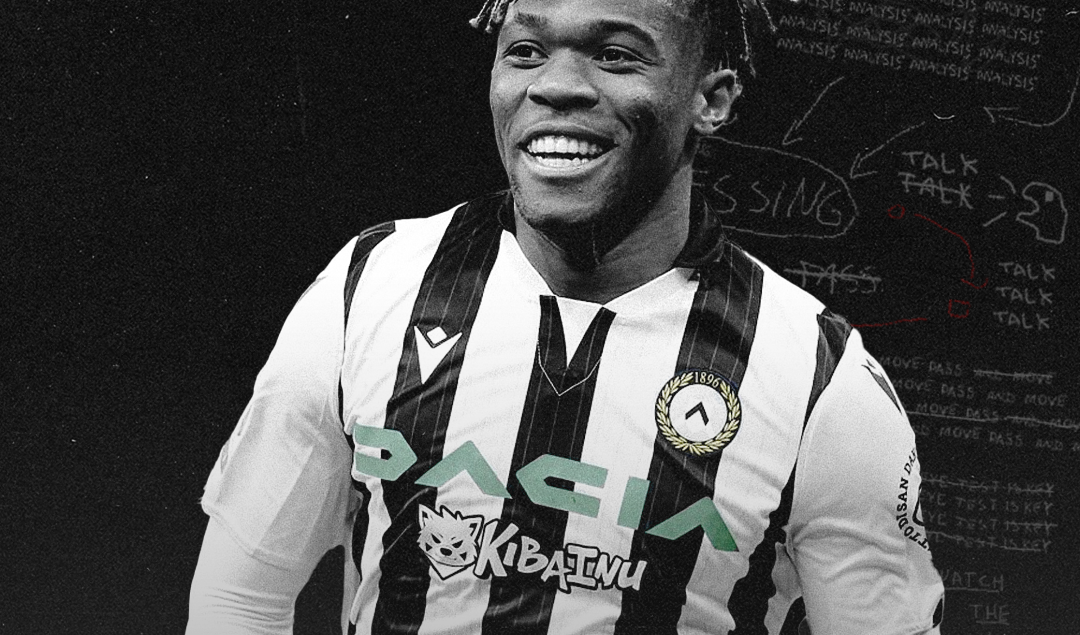 Iyenoma Destiny Udogie, better known as Destiny Udogie, has been one of the revelations of the 2021/22 Serie A, producing more than his fair share of impressive performances on the left flank for Udinese.

Born on November 28, 2002 to Nigerian parents in Verona, Italy, he came through the youth academy at Hellas Verona and featured in the senior squad for six Serie A matches in the 2020/21 campaign.

Udinese saw potential in the defender and signed him in July 2021 on a loan deal with an obligation to be bought outright from the Veronese side for €4 million.

Under both Luca Gotti and his successor Gabriele Cioffi, Udogie has operated as a left wing-back in the 3-5-2 formation and his role with the Zebrette has allowed him to utilize his pace as well as make runs towards the back post.

The Nigerian-Italian made his competitive debut for Udinese in the first round of the Coppa Italia in August 2021, playing the full 90 minutes in a 3-1 victory against Serie B club Ascoli, and then he played in the Friulian team’s 2-2 draw at home to Juventus in the opening round of the Serie A season.

After missing two matches due to a calf strain, Udogie returned to the Udinese squad for its match against Roma in Week 5 and has been a regular starter since then.

He provided his first assist for the season in the 4-0 victory away to Cagliari in Week 18 but it was his only direct involvement in a goal for the first half of the 2021/22 campaign.

The 19-year-old stayed on the bench during the 1-1 draw at home to Lazio in Week 26, but his form has improved significantly in his last 12 matches, scoring four times and supplying an assist. 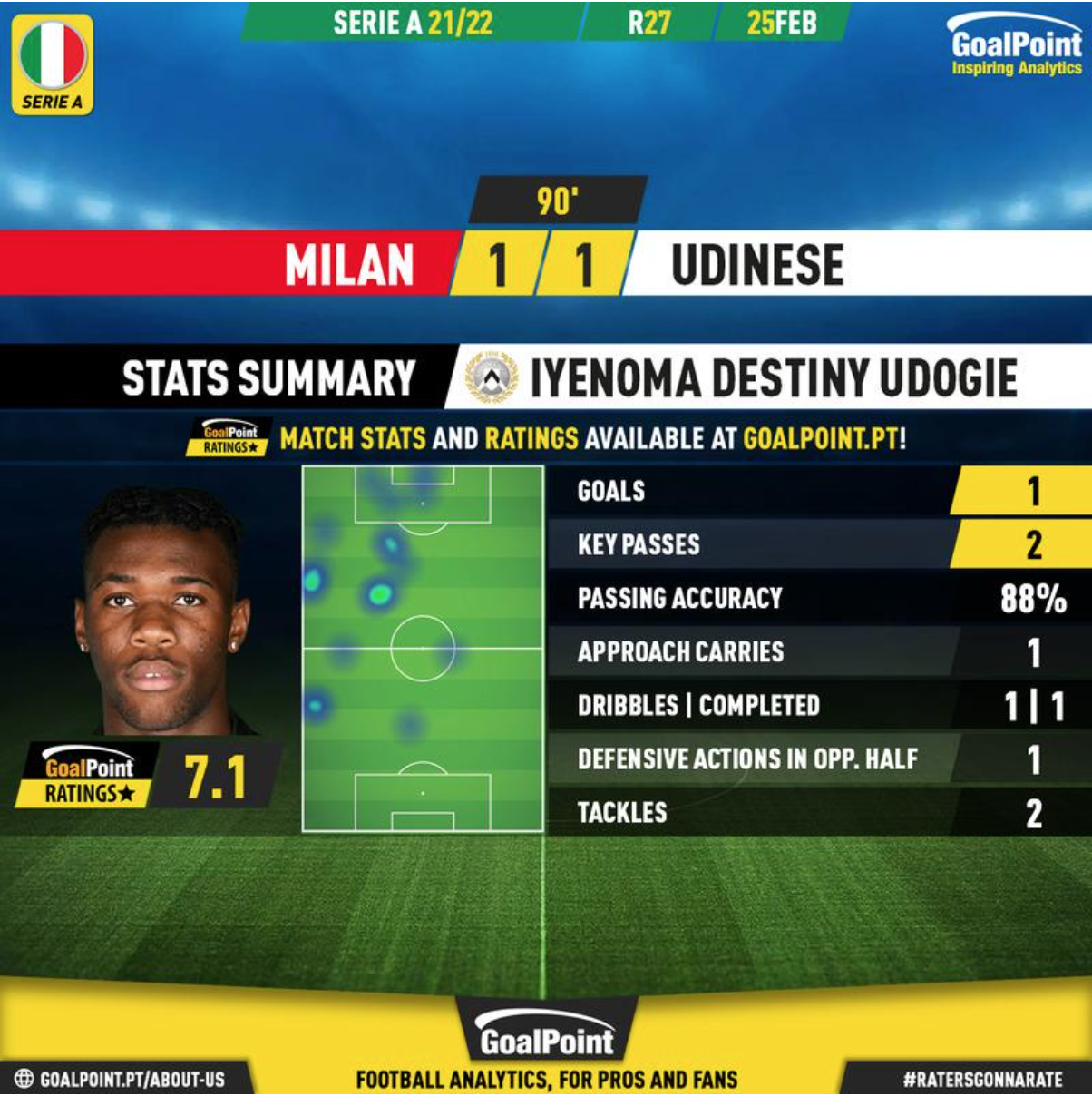 Udogie came off the bench after 55 minutes for Marvin Zeegelaar when Udinese was 1-0 down against AC Milan at the Stadio Giuseppe Meazza and he brought some spark on the left flank. He also scored the equalizer in the 66th minute, when he bundled Roberto Pereyra’s bicycle kick over the goal line.

In the short time he was on the pitch, the 19-year-old also made two key passes, one approach carry, two tackles, successfully completed one dribble, and had a passing accuracy rate of 88 percent according to Goal Point.

The heat map is a reflection of his limited game time in this particular match but it shows that he received the ball when he was in his preferred position above anything else. 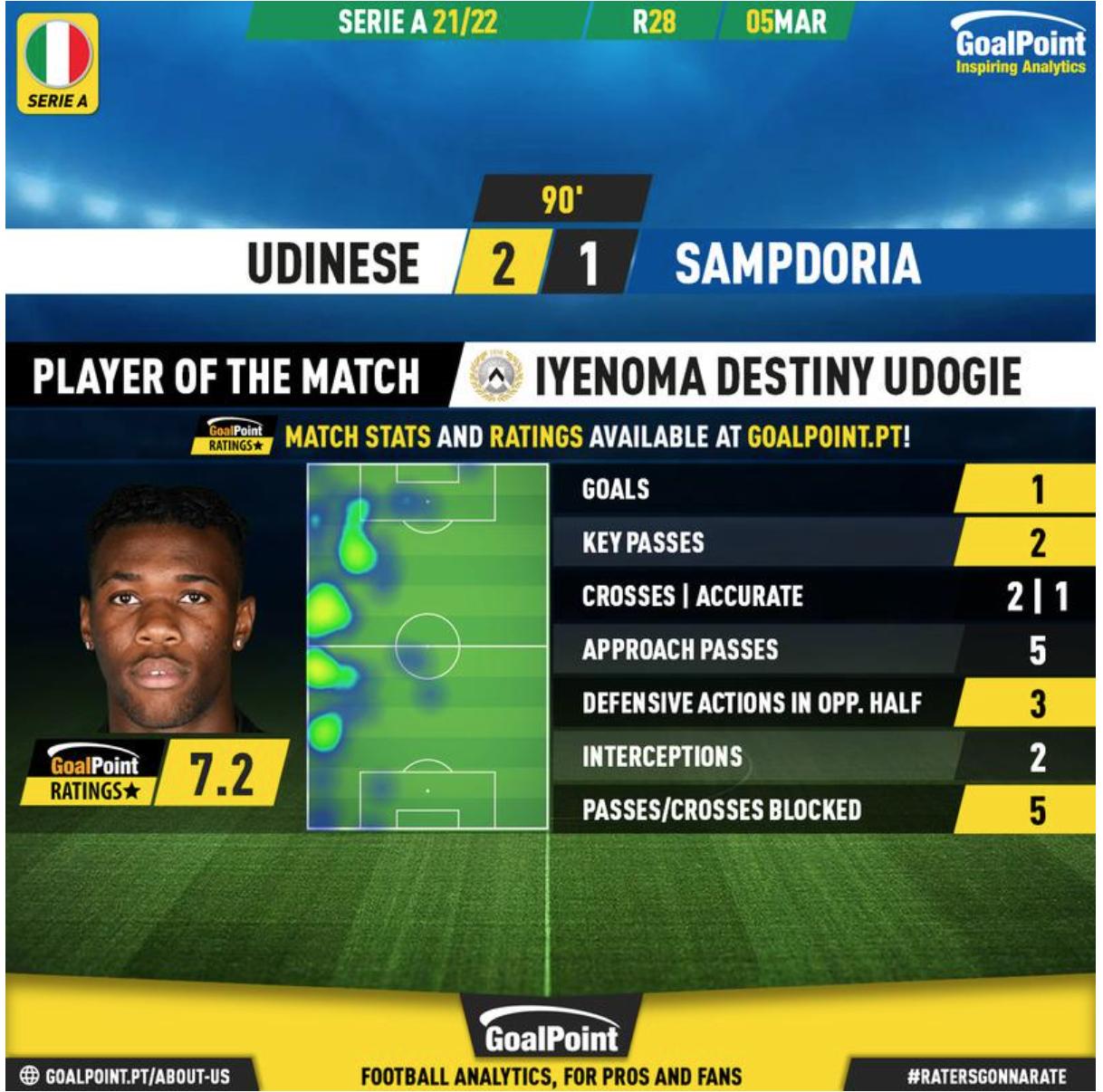 The wing-back was brought back into the starting line-up for the home game against Sampdoria in Week 28 and the Zebrette were able to register a 2-1 victory. Udogie played for the whole game and he scored Udinese’s second goal, making a run at the back post and then thump in Gerard Deulofeu’s pass into the net.

Aside from the goal, the Nigerian-Italian also made two key passes, five approach passes, two interceptions, three defensive actions in the opposition half, five blocks, and one cross out of two was successful against Samp.

He was able to demonstrate his attacking qualities without neglecting his defensive duties, and if the statistics are anything to go by, he can make successful contributions in both phases of the game.

The heat map does illustrate that Udogie predominantly features on the left flank. However, he would be positioned in the space between the left-winger and one of the strikers in the attacking third.

Since Udinese operate with wing-backs, the heat map suggests that Udogie will stay on the wing until he gets to the final third, where he can get closer to the penalty area and also move into the box if necessary. 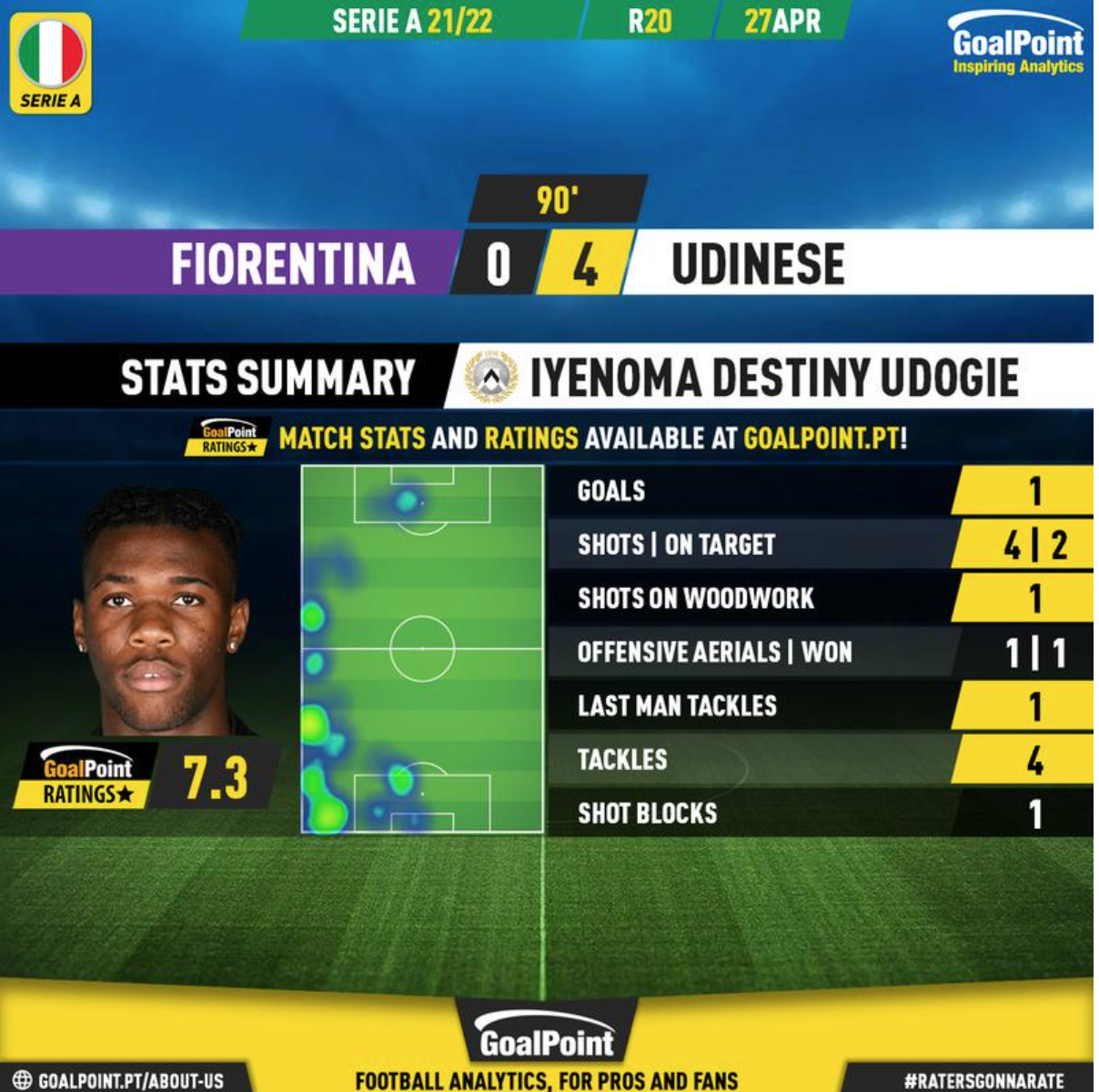 One of Udinese’s most impressive performances of the 2021/22 season was in its away trip to face Fiorentina in a rescheduled fixture. The Week 20 encounter was played on April 27 and the Friulani dismantled the Viola 4-0 in Florence.

According to the heat map from Goal Point, Udogie was positioned his own half for most of the match. This is reflection of the tactics of the two teams on the pitch. Fiorentina under Vincenzo Italiano will play with a high defensive line and try to control the play whereas Udinese defends with a deep defensive line and hit on the break.

Despite that, the Zebrette were much more dangerous with their counter-attacking play in this match and Udogie posed a great threat going forward.

He made four tackles including one as the last man and blocked one shot. The 19-year-old also took four shots with two on target, won one offensive aerial duel, which resulted in one header hitting the woodwork, and he scored the fourth goal of the game to seal the win. 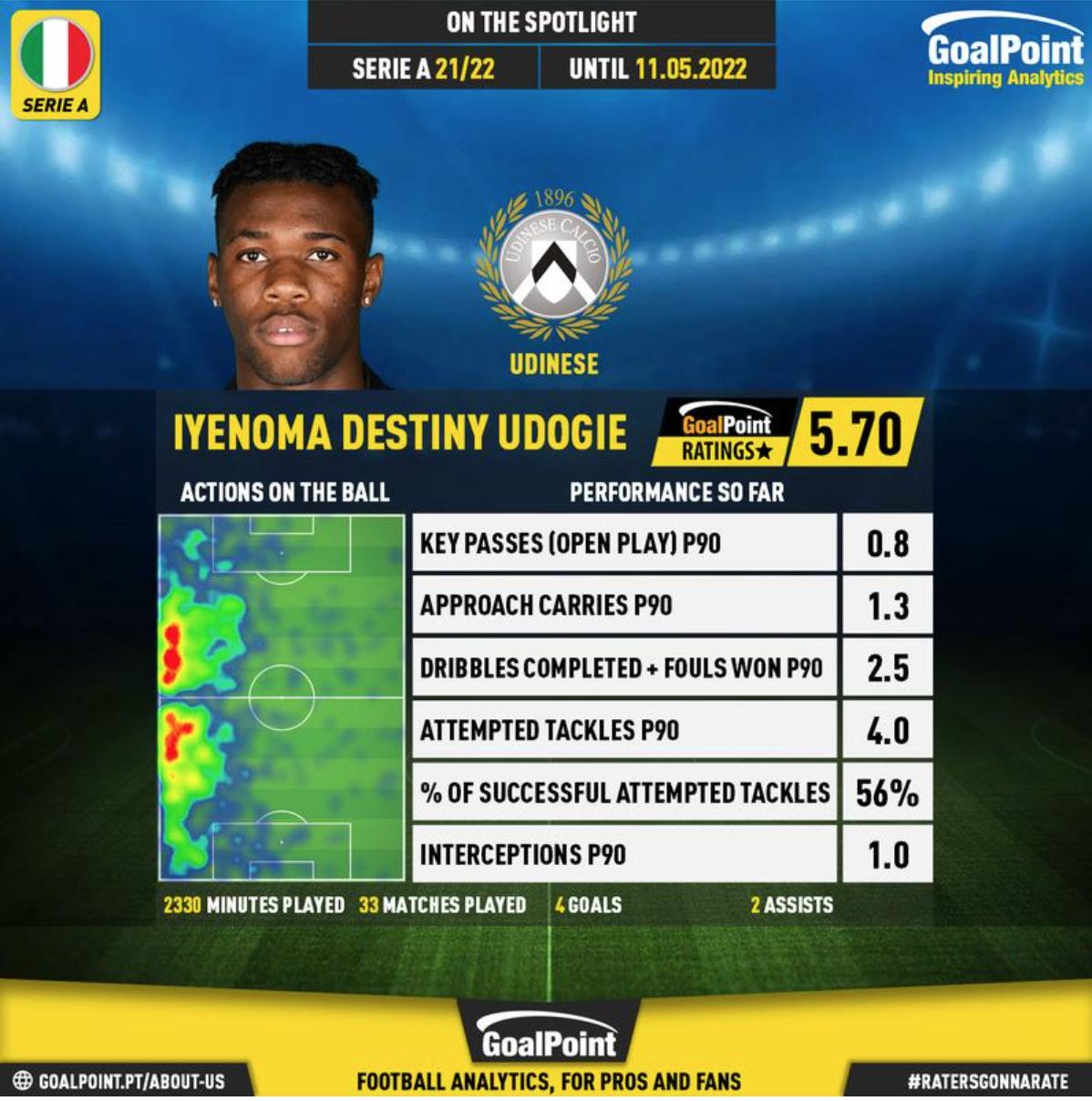 After 36 rounds, Udogie has played 33 Serie A games, found the back of the net four times, and assisted twice. He averages 0.8 key passes in open play, 1.3 approach carries, and 2.5 dribbles per 90, reflecting on his ability to go forward.

He still performs his defensive duties reasonably well too, averaging one interception and 4.0 attempted tackles per 90, with 56 percent of tackles being successful.

In an exclusive BTL interview, @ZachLowy speaks to Udinese midfielder Jean-Victor Makengo about his development in France, modeling his game under N'Golo Kanté and Luka Modrić, adapting to a new culture and style of play, replacing Rodrigo de Paul in Udinese's midfield, and more. pic.twitter.com/lNKm2tiuyF

Udogie is eligible to represent either Italy or Nigeria at international level, but having been a youth international for the Italians from Under-16 to Under-21 level, the Udinese defender wants to one day play for the senior team of his birth nation.

“I was born in Italy so I feel more Italian,” Udogie said on the Italian Football Podcast in April.

“I grew up playing with all the Italy youth teams so I want to continue playing with Italy, I hope to reach the first and win as many things as possible.

“Yes, it is an ambition to play at Euro 2024 for Italy. I have to give my best every game to show Roberto Mancini my quality. It is a big ambition that I hope to reach.”

Udinese is a club that has unearthed many gems throughout the years. Udogie is another one to have blossomed in Friuli-Venezia Giulia and he could also be an option for the Azzurri one day.

Regardless if he does eventually play for Italy or changes his mind and represents his ancestral homeland of Nigeria, Udogie is an exciting prospect that could be of great benefit for either national team one day.