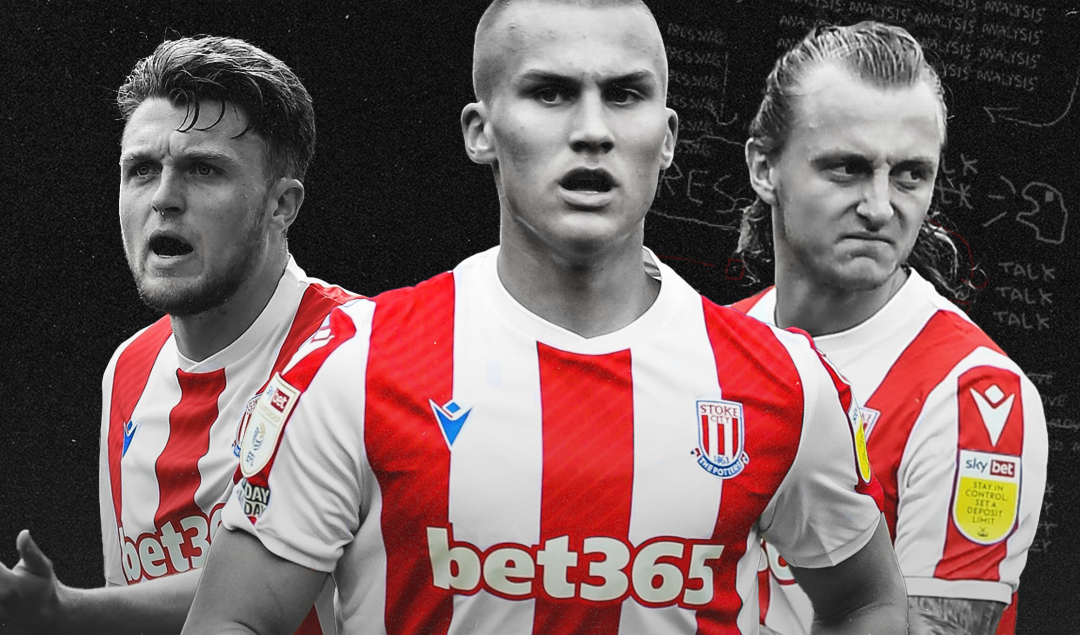 Whether it’s a model central defender setting the example, a masterful midfielder to match or an expert strike partner to emulate, the growth of young players is almost always accelerated when said player is nurtured by an elder associate, with every minute on the pitch alongside such seasoned pros a different lesson in how to succeed in the senior game.

Look no further than the current Premier League to find Mason Greenwood playing off Cristiano Ronaldo or Edinson Cavani at Manchester United and Chelsea’s Trevoh Chalobah to the right of Thiago Silva and Antonio Rudiger, it’s clear to see how they’ve matured just from the start of the season until now. There is no doubt that the experience of working with teammates that are so established is incredibly valuable in high pressured situations, but what happens when that access isn’t available?

From last season to this, the average age of Stoke City’s most used back three has gone from 28 to 21.3, and yet they look considerably more solid and self-assured as a unit so far this campaign. It might not be conventional to neglect the presence of a known leader who many teams rely on to coach fellow defenders through matches and instill discipline and confidence throughout the team, but this refreshing spin on the three-back system has worked absolute wonders thus far.

In Leo Ostigard (21), Harry Souttar (22) and Ben Wilmot (21), Michael O’Neill has combined three young but relatively experienced centre backs at Championship level to create a concrete defensive dynamic that is influential all over the pitch and intimidating for the opposition in many aspects.

Considering that this trio have a combined age of 64 – which is 11 years younger than Derby’s centre back pairing of Curtis Davies (36) and Phil Jagielka (39) – they remain commanding as a unit with Souttar in particular showing leadership skills and intelligence when it comes to positioning and organisation that you’d expect from a player some way beyond his years.

The Australian international is, without doubt, the leader of that backline, but each of the three possess an infectious intent to win their individual battles and distribute the ball well both at pace and at range when required to set the standard from deep.

Not only do they smother the opposition’s attacking moves more often than not, but they continue to wear the attackers out by passing the ball around them, inviting the press before having the cutting edge to play through it when gaps start to appear.

On either side, Wilmot and Ostigard show a constant need for the ball that is required of a top modern-day defender. As attacking phases progress into opposition territory, they act as wing backs to allow Josh Tymon and Tommy Smith as much creative freedom as they want whilst helping them overload the flanks, where a large proportion of their attacks come from.

“I feel like Ostigard could have stepped up in place of Ben White!” 💪

Stoke have signed Brighton defender 𝙇𝙚𝙤 𝙊𝙨𝙩𝙞𝙜𝙖𝙧𝙙 on loan.@JustinPeach27 is BIG fan of the move.

It is unsurprising that both Tymon and Smith are in the top 20 players in the league for successful crosses this season, even with the majority of those in and around them in that chart being the set-piece takers for their respective teams. Their entire attacking system is built upon those wide centre-backs and their ability to pick passes and allow their technical talent to float into the areas in which they thrive.

When it comes to centre-backs alone, Wilmot has completed the most final third passes with 43 (7.2p90), QPR’s Yoann Barbet coming closest to his tally with 36. As for passes completed in the opposition half by any defenders, both Wilmot and Ostigard are in the top 10 with more than 15 per 90 each.

The stats continue to stack up for Stoke’s impressive centre-back partnership, not just in terms of passing for their dynamic duo, but for the beastly figure in Harry Souttar that binds the whole thing together seamlessly.

At three interceptions per 90, he is third highest for defenders in the league, and when there isn’t that distance that requires Souttar to stretch out a rangy leg to thwart an attack, he is even more dominant in close quarters. The Stoke vice captain has won 81% of his aerial duels and 80% of duels overall, which is currently the highest in the division. Even more impressively, however, the multifaceted Ostigard is right there beside him with 79% of duels won in the air, 74% in total.

For all that he brings to O’Neill’s side, exactly as he did at Coventry last campaign, Ostigard is a truly rare asset in an expansive 3-5-2 team. The Norwegian is one of few players that would come out best in a head-to-head collision with a car before dusting himself down and pinging a ball through one window and out of the other side with ease.

The way he stays so composed and confident wherever he is on the pitch, be it in his own box last-ditch defending or on the ball tasked with trying to cut through two deep banks of four, he gives the crowd a constant reason to puff out their cheeks, glance to those sat beside them in half relief, half disbelief at his impressive all-round ability.

Ostigard is without doubt the man out of the three with the highest ceiling, but the system allows Stoke to get the very best out of all of their young centre-backs both with and without the ball, centrally and in the flanks, and finally, in the areas of the pitch that have barely been touched upon so far, but where they are arguably the most impactful – both penalty areas.

With the exception of Wilmot – who will venture into the box less frequently than the other two – the aforementioned aerial presence that Ostigard and Souttar provide is quite frightening when combined with Mario Vrancic and his deadly deliveries from set pieces. With that being said, their brutish but equally acute nature also translates into these scenarios when a cross comes flying in at either end.

The 22-year-old centre back has also scored 6 goals in 6 games for Australia.

At set pieces, many players will simply do their due diligence at a corner or a free-kick, monitoring a man or making a run like a child doodling in a school book, trying to make it look like they’re busy. Meanwhile, Souttar and Ostigard are taking every note, helping out their partner next to them whilst being ready with the answer before the teacher has finished the equation. Or to put that in footballing terms, they will have tracked every run and where their teammates are, anticipated roughly where the ball is going before getting in position to win the ball.

If Souttar has for once struggled with the working out, you can almost guarantee that Ostigard or Wilmot have got the right answer, and vice versa. In truth, this analogy rings true in almost any scenario for Stoke’s tremendous defensive trio due to their outstanding individual and cohesive ability. The set of teacher’s pets, give the other kids a chance for crying out loud!

Inevitably, though, where they lack an ounce of worldliness with all three in the early stages of their careers, they do have their off days. In periods of the game when the frequency and intensity of opposition attacks begin to rise – especially in the presence of a big target man up front – they have shown cracks in their resolve so far this season.

The 3-0 loss to Fulham is the key example of this, where the pressure and territorial control from Marco Silva’s men was a constant theme throughout. Wave after wave of attack saw them gradually swept aside, although they did display enormous strength of character against what is frankly a far superior team.

Even in defeat, which is becoming increasingly rare for this Stoke side, there were plenty of positives to take from a defensive perspective. Michael O’Neill may have taken a risk in dropping the ever-present and proven James Chester and Danny Batth for younger alternatives, but as they continue to grow as a partnership game after game, it is becoming increasingly apparent that it was a risk worth taking.

*Stats correct as of September 13