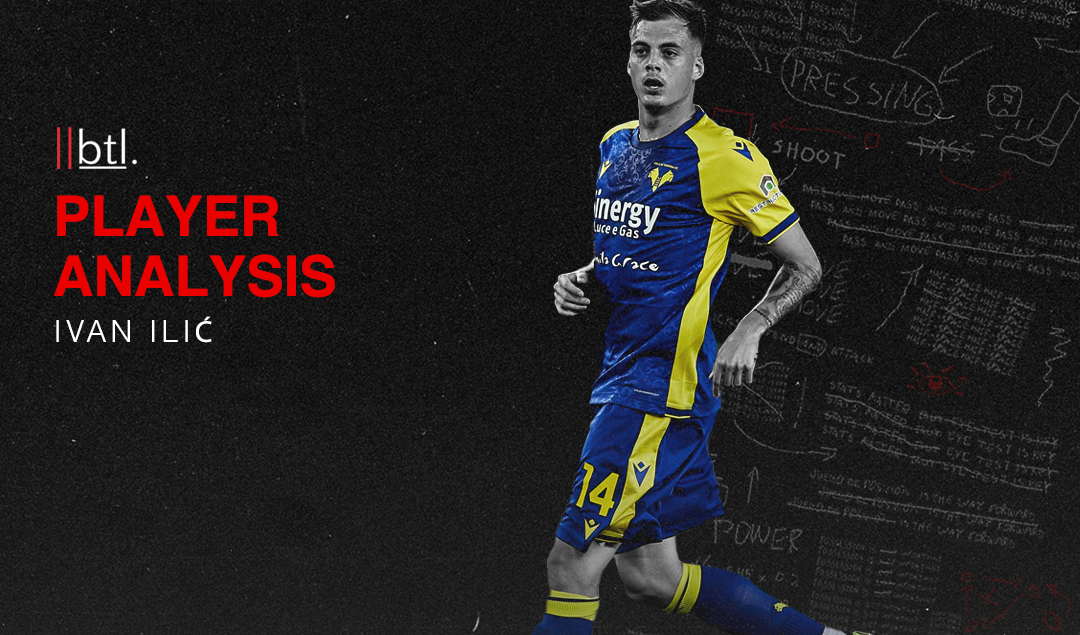 Under the guidance of Pep Guardiola, Manchester City has been one of the dominant forces of the English Premier League in recent years. Having won three league titles since the former Barcelona and Bayern Munich coach arrived in 2016, the likes of Kevin De Bruyne, İlkay Gündoğan, and David Silva playing important roles in the midfield.

With such established players influencing the play, it has been hard for any youngsters to break through; Phil Foden being a minor exception. Serbian youngster Ivan Ilić was not able to earn those opportunities at Manchester City but a switch to Hellas Verona in Italy’s Serie A has allowed him to find his feet as a senior footballer. After impressing on loan during the 2020/21 season, the Gialloblu acquired the midfielder from City for €7.5 million in August.

The 20-year-old has represented Serbia at various youth levels and he already has two caps for the senior squad. Despite his young age, he has gained some decent experience under his belt and he has already made history. Ilić was a product of the Red Star Belgrade youth academy, and on April 1, 2017, he became the youngster player to have made his competitive debut for the Serbian giants at 16 years and 15 days when he came off the bench in their 2-1 victory against Spartak Subotica in the Serbian Super Liga.

Manchester City decided to take a chance on the central midfielder and purchased him for €2.5 million, but it decided to let the Serbian starlet stay on loan at Red Star. His older brother Luka, a winger, was also purchased by the Citizens for the same price. He only made one competitive appearance throughout the 2017/18 campaign, playing for the full 90 minutes in the Crveno-beli’s 5-0 victory against Dinamo Vranje in the First Round of the Kup Srbije.

Ilić would return to the Citizens for the first half of the 2018/19 season, but with no hope of breaking into the first team, the midfielder went back to Serbia for more senior experience.  He would join FK Zemun, based in a municipality in Belgrade, for the second half of the campaign and he scored three goals as well as supplied an assist in 16 Super Liga matches. Although he played primarily as a defensive midfielder, he also played a few matches in an attacking midfield role.

For the 2019/20 season, Ilić would get his chance to play regular football outside of Serbia, but it was not with Manchester City. The Citizens sent the midfielder on loan to NAC Breda in the Dutch second division, where he could go on to make 21 appearances and score three goals. He also played three times in Dutch cup and scored once.

It was a rather special season for Ilić, who played alongside his brother Luka throughout the campaign. While Luka remained on loan with NAC Breda for the 2020/21 season, Ivan’s career went on a different path and it turned out to be a great blessing.

Serie A club Hellas Verona had sold Moroccan international Sofyan Amrabat to Fiorentina and it needed to find a replacement. It was decided that Ilić would be brought in to replace the deep-lying playmaker and the Gialloblu would bring the Serbian on loan.

Under the tutelage of Croatian tactician Ivan Jurić, the Mastini achieved a respectable 10th place finish on the Italian league table, and Ilić made the most league appearances of his season so far, playing 29 times in 2020/21. The Serbian made his debut for Hellas Verona in a 0-0 draw against Roma in the opening round of the season but the Giallorossi fielded an ineligible player and the Veronese were awarded a 3-0 victory.

His first Gialloblu goal then came in his only Coppa Italia appearance for the campaign, scoring the opening goal from long range in a 3-3 draw against regional rivals Venezia. The third-round encounter could not be settled after extra-time and the Mastini progressed to the next stage after winning 3-1 on penalties.

Whether it would be alongside the more physically imposing Adrien Tamèze or the more experienced Miguel Veloso, Ilić fitted in seamlessly into the Verona central midfield pairing and he did not let his age deter him.

He scored twice throughout the 2020/21 Serie A campaign. One of them coming from a tap-in in a 2-1 defeat against Inter, which initially came from a horrendous error from Nerazzurri goalkeeper Samir Handanović. Surprisingly, history would repeat itself once more.

Inter Milan have conceded their first goal of the season.

According to WhoScored, Ilić had a successful passing rate of 85.8 percent, the second-highest in the team out of those who played more than half a season; he averaged 38.1 passes per game, equal third with Veloso; and despite operating as a central midfielder, he was fourth for crosses on average with 0.3.

His form with Hellas Verona persuaded new Serbian coach Dragan Stojković, who was a great attacking midfielder in his own right, to select the 20-year-old. Ilić made two substitute appearances in June; a 1-1 draw against Jamaica and a 1-0 defeat to Japan.

The midfielder has returned to the Under-21 squad, but Serbia failed to qualify for Euro 2020, and Stojković has been tasked with taking his country to the World Cup. A strong 2021/22 campaign with Hellas Verona could persuade the Serbian coach to trust the young midfielder going forward.

The Mastini started the season without Jurić, who had left to coach Torino, but Ilić was purchased outright from Manchester City. New tactician Eusebio Di Francesco used him as substitute in the 3-2 defeat to Sassuolo in the opening round of the 2021/22 Serie A season but he played the midfielder for the full game against Inter.

Hellas Verona lost 3-1 to the reigning Serie A champions but the Gialloblu gave the Nerazzurri a fight and they took a surprise lead thanks to their Serbian starlet. Inter goalkeeper Handanović tried to pass the ball to Marcelo Brozović but Ilić got ahead of the Biscione midfielder. The Serbian then took one step forward and as the goalkeeper advanced, he chipped the ball over him.

The Nerazzurri eventually showed that they had enough individual class to overcome the deficit but Ilić still worked hard to win balls back for his team as well as create a play. Verona might struggle under Di Francesco but 2021/22 should be another season in which Ilić gets valuable minutes under his belt. Perhaps his time at Manchester City came too soon but a move to the Gialloblu has been fundamental for his development and he is able to develop with less pressure.

With Serbia also looking to start a new chapter under Stojković, the Hellas Verona midfielder could make the most of his club form to also build a brighter future for his country’s national team.