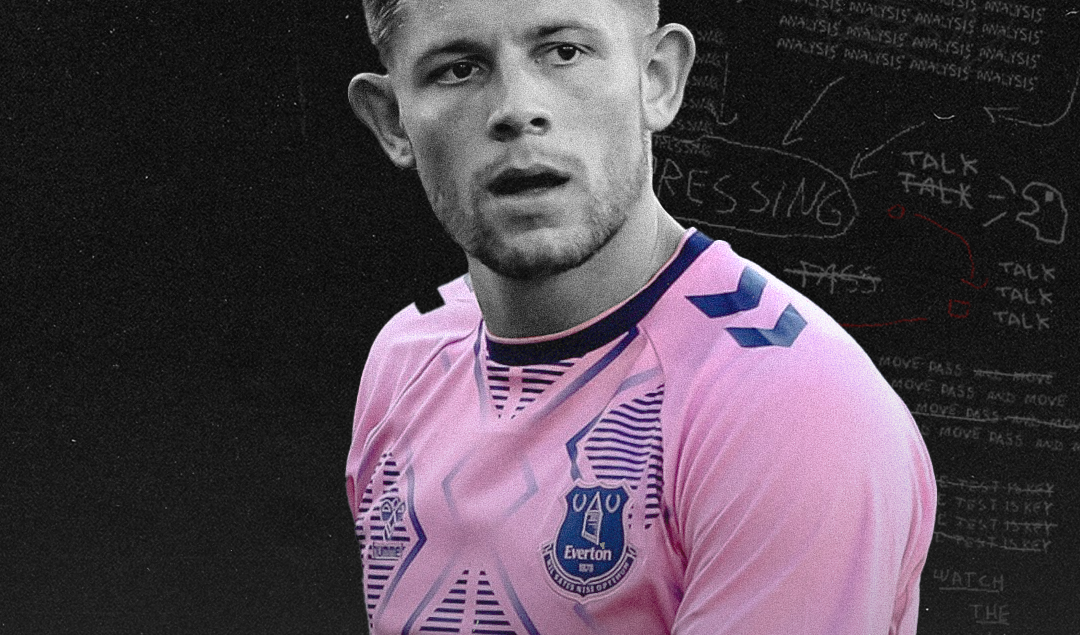 For many years, Everton have had massive issues at centre-back; since David Moyes’ departure some nine years ago, the Toffees have employed more than 15 players in the position.

Some of those were coming towards the end of stellar service at the club, like Phil Jagielka and Sylvain Distin, some are still plying their trade at the club such as Michael Keane and Mason Holgate, and some tenures should never have begun at all (see Antolín Alcaraz and Eliaquim Mangala).

The latest to try his hand at the position will be James Tarkowski, as the former Burnley defender has arrived at Everton as a free agent following the expiry of his contract at Turf Moor – commanding a rumoured £80,000-per-week in wages. But will he finally be the man to sort out the Blues’ rearguard?

Everton need a colossal centre-back who commands the defence and can act as a leader – something they have sorely lacked on a consistent basis. The closest they have come to that in recent years is Yerry Mina; a terrific defender who more than doubled the Blues’ win percentage when he played last season, starring most notably in a win over Chelsea at the back end of the campaign.

But Mina’s worrying injury record means the Toffees could do worse things than cut ties with the Colombian this summer with Lazio supposedly interested, no matter how effective he is when he plays.

Michael Keane spent the opening months of the 2020/21 season running around Goodison like The Terminator, scoring goals and heading everything that moved. But outside of a low block, Tarkowski’s former teammate has looked all at sea at times as his error-prone ways and mental fragility have come to the fore after making consistent blunders down the years.

While impressive at the tail-end of last season and one of the players who stood up to be counted, Mason Holgate hasn’t developed as first thought and is  probably on his final chance to impose himself on this Everton side.

Ben Godfrey endured an injury-ridden season last year but will look to stake his claim for a starting berth alongside Tarkowski, while Jarrod Branthwaite has already been linked with a loan move away for next season.

But, why do Everton want the 29-year-old? They’ve been stung before by giving ageing players big contracts and are very much aiming to look younger and cheaper in order to balance the books, but not every signing has to go down that route.

For free, the former Brentford man ticks off a very important box, and is reportedly on the same wages as the outgoing Cenk Tosun.

Straight away, then, it’s clear Tarkowski needs to be two things; reliable and consistent. Obviously, they are two of the main pillars of any, well, footballer – but especially at centre-back. Everton have been rocky for far too long and have had players who have good attributes but can’t marry them together when it matters most.

If Yerry Mina played 35+ games a season he would be a leading Premier League centre-half, if Michael Keane could cut out silly errors and find some consistency, then he too would earn far more praise. But neither offer a blend of what JT is being signed to bring.

To put that into comparison, Yerry Mina missed 12 home games last season alone – nevermind over a five-year period. The former Barcelona man was also forced off through injury three times last campaign, once more than Tarkowski was during his entire six-and-a-half years at Burnley.

Effectively, if all goes well, Everton’s latest signing should be the beacon of consistency that not only their defence has craved, but the club as a whole since the days of Jagielka and Distin (although I’m sure the Everton injury Gods will no doubt have something to say about that).

But why Tarkowski? There are umpteen centre-backs out there for good fees who have solid injury records and decent Premier League experience, what made the Englishman stand out?

Firstly, some housekeeping. Obviously, Tarkowski has played in a Burnley side which spent much of their Premier League life defending – he did a lot of it, but that doesn’t affect the fact that he was often very good at it.

The first thing I think of when it comes to colossal centre-backs is their aerial ability, and the twice capped Englishman is a machine in the air – making an average of 7.3 aerial duels per 90, a number only bettered by Brentford’s Ethan Pinnock.

At times, Burnley would position Tarkowski at the near-post from corners in order clear the danger early – a quality Everton could do with, having conceded a league-high 22 set-piece goals last term.

His heading numbers will fill a void which is most often felt when the aforementioned Mina is out of the side, while a pairing alongside former teammates Keane could form the bedrock for a solid Everton backline if Lampard reverts to a style which suits both equally.

Tarkowski is a very active defender; only Cristian Romero and Mohammed Salisu made more tackles from centre-back than the Burnley man – two of the best central defenders in the Premier League last season and two of the finest examples of ‘dog’ defenders. The pair also rank ahead of Tarkowski in terms of pressures made, but he still ranked within the top ten throughout the Premier League.

He loves a challenge (as Everton fans know all too well after his brutish tackle on Richarlison last September), but more often than not he’s firm but fair – putting in a host of meaty challenges during his time in claret and blue, as he looks to close attackers down early and snap into any loose touches.

Adding to this, he is a proactive defender who can help Everton win the ball back earlier during attacking play and help his teammates squeeze up the pitch; they simply haven’t had that sort of mobility for a while.

Burnley obviously defended deeper than most sides in the top flight, but as sides gained ground on Nick Pope’s goal, they more often than not found Tarkowski on the way. During 2021/22, only fellow Englishman Tyrone Mings blocked more shots, while only teammate Charlie Taylor blocked the ball more during general play.

He ranked 5th for the same metric in 2020/21 amongst centre halves, but behind Everton pair Michael Keane and Ben Godfrey (with the latter aided by playing a dozen games at full-back), but that represented the way Everton played under Carlo Ancelotti that season; deep and with an emphasis on protecting the penalty area – a stylistic option which we have already alluded to.

But how would he cope if Lampard chose to play a more expansive game, which could require Tarkowski to utilise the ball more at his feet? It’s tricky to say given his Premier League career up until this point, but perhaps we can gather more the further back we go.

When he was at Brentford (albeit in a lower division), he averaged around 50 passes per game, with a passing accuracy of 80%. Those numbers dipped during his time at Turf Moor to closer to 33 passes per game, and an accuracy of 68% – perhaps suggesting he will find it easier when performing in a team which want to enjoy the ball more than Sean Dyche/Michael Jackson’s Burnley did.

Last term, only Keane (a player better with the ball at his feet than often given credit for) attempted and completed more passes out of Everton’s current centre-back options, while Tarkowski’s total of 305 progressive passes (a forward pass of 30 yards in the defensive half or ten in the offensive), ranked him 10th in the Premier League – better than any other Everton player.

The numbers suggest he could do an okay job when it comes to distributing the ball out of defence, and his progressive numbers are quite strong if Everton can adopt a midfield which wants to utilise the ball.

It is all a bit of a guessing game, though, and whether Tarkowski will be able to play as an out-and-out ball-playing centre-back will be established if and when Lampard chooses to go down that route.

Of course, Tarkowski is far from perfect. While attracting solid interest from Leicester and West Ham to the tune of a £30m bid by the former, there are reasons why suitors didn’t pursue a deal for him beyond what was admittedly a lofty valuation.

He isn’t particularly quick but is more mobile than Keane, meaning he is less likely to be caught out when playing higher up the pitch but would certainly be susceptible to that. The pace of Ben Godfrey could become a factor if Everton want to pair the two together, however.

His tally of two errors leading to goals last term was bettered by only Tim Krul and Ben Foster (while ironically leaving him level with both Keane and Godfrey), but two in one season represents half of his entire total for this metric during his days in the Premier League.

The move also requires context. Six years after being taken over, I’m sure Evertonians didn’t envisage there to be so much chat about a free agent signing who had spent his entire Premier League career playing for Burnley by the age of 29 – with all due respect to the Clarets. And for many fans, the days of signing players approaching their thirties should be behind them.

But for my money – this is the kind of deal Everton should have been doing all along. Poaching players who are leaving clubs for free or nominal fees, while paying them sensible wages given the impact they are predicted to have – especially considering his Premier League experience. It’s just a shame that he feels like more a jewel in the crown of Everton’s summer, than a supporting piece who will bolster what should, by now, be a very competitive squad.

Is Tarkowski a top-level centre-back? No, but not many clubs who finish 16th in the Premier League can afford such a player, and certainly not one who are stuck in a financial malaise which is showing little sign of easing.

Frank Lampard needs players who are reliable and cost-effective, but the fact this is in such a problem position for the Englishman, it makes all the more sense.

Good in the air, strong in the tackle and a commander who can hopefully add some much-needed steel to an Everton spine which has been limp for far too long – James Tarkowski, for the time being, should be exactly what Everton need.