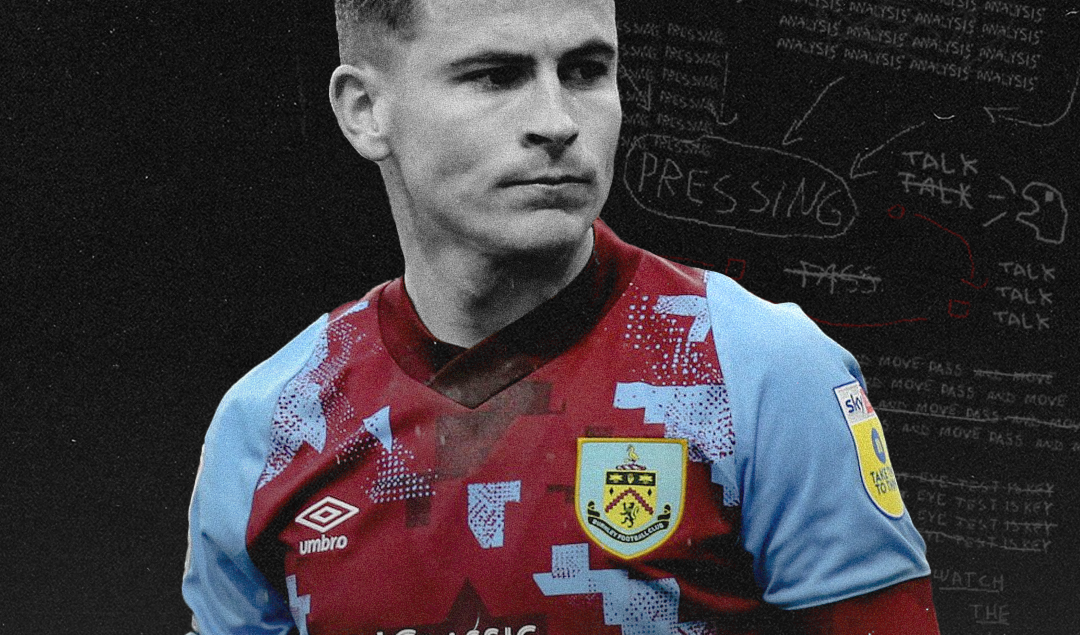 Vincent Kompany always had an old head on young shoulders. He was a stalwart during Manchester City’s accession to Premier League dominance and performed a crucial role in establishing a winning culture at the Etihad Stadium.

While there is no doubt that the Belgian was an accomplished defender, stylish ball player, and unflappable captain, his intellect was the factor that distinguished him from his peers. He simply understood the sport, where to stand on the pitch, and how to navigate risky moments.

It’s telling that Kompany, now in his second head coaching role, was so impressed by Josh Cullen from their time together with RSC Anderlecht that he brought the Republic of Ireland international with him from Brussels to Burnley.

“I hope that he enjoyed working with me for the two years in Belgium as much as I enjoyed working under him,” the 26-year-old told the Lancashire Telegraph last month. “His style of play and his ideas about the game suit me. I haven’t had the conversation with him as to exactly why he brought me in, but I take that as a little bit of a compliment that he made the decision to bring me to Burnley.”

Cullen, a product of West Ham’s academy of football, has taken an unconventional path to the Championship. He enjoyed loan spells with Bradford City, Bolton Wanderers, and Charlton Athletic before terminating his relationship with the Hammers to join Anderlecht in 2020. After two years in the Belgian Pro League, the box-to-box midfielder returned to England with ambitions of earning promotion to the Premier League.

His impressive form at Turf Moor implies that an opportunity to play in England’s top-flight isn’t too far away. Burnley sit top of the league and have lost just once since August 12 — a 5-2 defeat to second-placed Sheffield United at the weekend. Although Kompany’s side have experimented with several formations this season, the Clarets default to a fluid 4-2-3-1 and have out-passed their opponents by an average of almost two-to-one, per Wyscout.

Cullen has started almost every match this season and has rapidly developed into a core member of the squad. While he is still adjusting to a new role in a new league, the Southend-born midfielder’s influence is already clear to see.

“The schedule is much more hectic than what I was used to in Belgium, where it was predominantly one game a week, and now you could have three games in six days,” the 26-year-old told the Belfast Telegraph in September.

It’s been a little bit of a shock getting used to that again but, as a player, it’s so enjoyable as you want to play as many games as you can. It’s part of the job. It has been something to get used to again but it’s something I’m loving.”

Cullen is a confident and ambitious distributor– which can be his best or worst trait in different situations. Before we dive into his deficiencies, let’s review four plays that highlight his ball-playing ability.

The Irishman loves crossing – which is peculiar for a player of his position. However, his deliveries are exceptional due to his chess-like approach to the sport. Before the ball arrives at his boot, he always scans the field of play at least once to quickly identify his next move. If he spots an opportunity to service his forwards, he will – as demonstrated in Anderlecht’s 2-0 win over Genk in February:

Half-time is approaching and Anderlecht are pushing to double their lead over Genk. Michael Murillo (AND62) gains control of the ball on the edge of the penalty area and plays a simple drop pass to Cullen (AND8). He cushions his first touch into the striking zone, quickly scans the box, and hits a cross towards the back post. Christian Kouamé (AND99) heads the ball to Yari Verschaeren (AND10) for an unmissable chance.

Murillo’s pass and Cullen’s movement in the clip above is scripted – it features a pattern of play that Kompany has focussed on as a coach. There were already five Anderlecht players in or around the penalty area by the time Cullen arrived on the scene. Murillo had a choice: he could drive for the byline or reset with a simple pass. He made the right selection, as illustrated in the clip below:

Anderlecht are leading 3-1 in the final minutes and five players have committed to penalty area runs. The team’s widest midfielder reaches the edge of the penalty but checks back in possession. Cullen is running from deep and is totally unmarked. He hits a first-time cross to the unmarked Murillo, who should score.

As in the first example, Cullen arrived on the scene late to receive a downhill pass. His delayed movement allowed Anderlecht to shift the point of attack just before crossing – a move that forces the opposition between two desires: squeezing out or sitting deep. In both examples, defensive confusion caused by the pass (some squeezing, some sitting) leads to a scoring chance.

Cullen’s narrow deliveries are a key factor in his success under Kompany. The former West Ham prospect also excels when asked to play conventional passes from central midfield – as demonstrated in a draw with Club Brugge:

Wesley Hoedt (AND4) passes to Cullen, redirecting possession away from the congested left flank. Cullen checks his shoulder before the ball arrives and spots an opportunity to change the point of attack. He takes the ball on the half-turn, exploits empty space in the midfield, and threads a line-breaking pass to the left wing. It leads to a cross, but Club Brugge clear the danger.

Cullen’s sense of ambition in possession is evident in his statistical output. He has played 5,535 minutes in 2022-23, scoring once and providing three assists. His passing numbers jump off the screen:

However, the former Charlton Athletic loanee’s desire to quickly transition to attack can backfire – as shown in two examples in a draw with Preston:

The match is tied and Preston are stifling Burnley in a low-block. Taylor Harwood-Bellis (BUR5) plays a simple pass to Cullen (BUR24). Back-peddling into space, Cullen scans the field before the ball arrives on the scene. He twice looks for a switch to the opposite flank, but decides it would be the wrong choice. Instead, he waits for the nearest opponent to pinch towards the ball and responds by playing a channel pass to Jay Rodriguez. They don’t connect on the play, but Burnley gains territory with a throw-in deep in Preston’s half.

Burnley have a throw in the defensive half. As nobody else moves for the thrower, Cullen points into space to offer himself as an outlet. Despite having his body between the ball and Troy Parrott (PNE15), he attempts to play a line-breaking, first-time pass. He does not connect with his target, but Rodrigues bails him out with a ball recovery.

In effect, Cullen can fall into the trap of trying to thread unthreadable needles. However, he rarely errs in the defensive half and therefore deserves credit for his ball-playing ability. His approach to defensive work is underpinned by his quickness off the mark, positional awareness, and braveness in the challenge.  Cullen has won the lion’s share of his defensive duels since arriving at Turf Moor, including in a hotly-contested tie with West Bromwich Albion:

Jordan Beyer (BUR22) and Samuel Bastien (BUR26) combine on the left flank but fail to cross the halfway line. West Brom’s Matty Phillips (WBA10) intercepts the pass and pokes the ball towards a teammate. Cullen reacts quickly, readjusts his feet to track the flight of the ball, and establishes a physical battle with his opponent. As the ball starts to drop, he nips in and sweeps it clear.

Cullen also plays a crucial role in Burnley’s defensive structure under Kompany. As in the clip above, he is quick to identify opportunities to retrieve the ball and is able to seize those moments due to his underrated acceleration. In a 2-0 win over Millwall in August, the 1996-born midfielder put both qualities to use:

Burnley are in the driver’s seat against Millwall but have allowed their defensive line to slip deeper and deeper. But Cullen takes the initiative when a backwards pass is played, using his defensive crouch and acceleration to drive play out of the defensive half.

Cullen is an all-action midfielder who relishes his defensive responsibilities and is progressive in possession. His chance in the Premier League is just around the corner. It is a matter of if – not when – he rises to the very top.