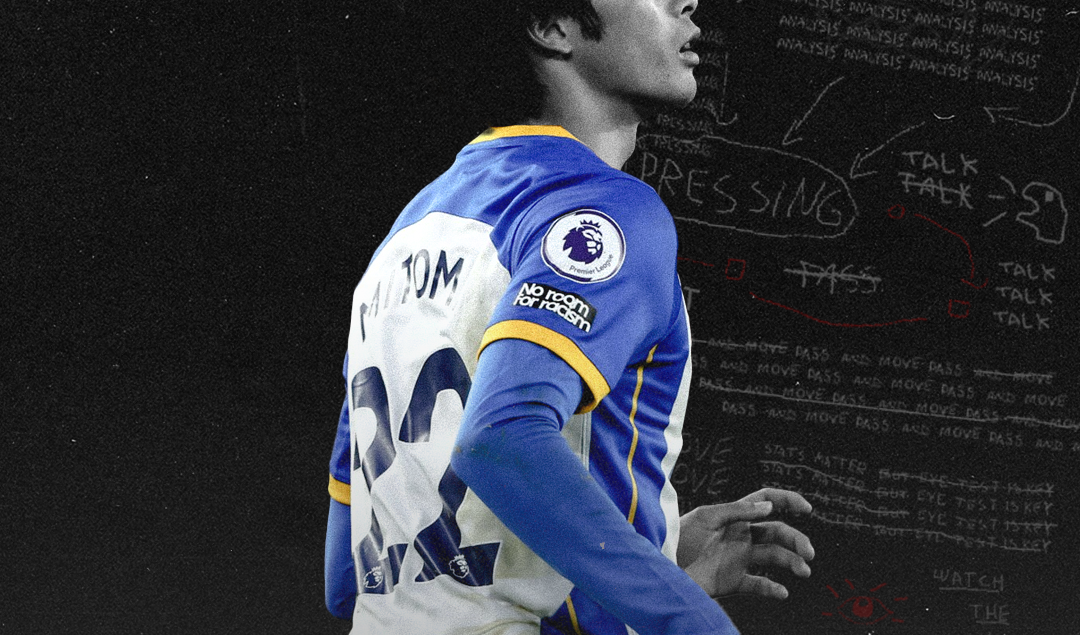 Brighton’s recruitment has been impressive these past few years and credit must be given to owner Tony Bloom, as he has used his data management background to transform the small South Coast club into the envy of the rest of the league. Data has always been used in elite football, but Brighton have placed a heavier reliance on data analytics than others, successfully positioning themselves as a development club in the Premier League, similar to the Red Bull clubs.

The Seagulls use their scouting system to taking calculated risks on players, usually on players with high potential, who fit their style of play and are available at a low market value or below MV. The key to this is the coordinated success of both the scouting and recruitment teams; With the scouting correctly identifying the right players using predictive analytics and the recruitment team negotiating the best deals for both incomings and outgoings.

They also use the loan system quite well to aid in player development, again using the data to determine the correct clubs’ players should go to. Brighton don’t stand in the way of those that are successful at the club, as long as the price is right of course. Players are sold on for profits, and they usually already have a replacement in their ranks. Moises Caicedo for Yves Bissouma and Roberto De Zerbi for Graham Potter, are two successful replacements that spring to mind.

One of the latest diamonds which have been unearthed is 25-year-old Japanese international Kaoru Mitoma. His transfer fee of £2.5m falls within the desired price range for Brighton’s transfer strategy and this low-risk high reward signing has seemingly worked out given his latest Transfermarkt value of €8.5m (≈£7.5m), tripling the initial investment in 18 months.

Prior to signing for Brighton, in August ‘21, tricky winger Mitoma spent his entire pro career at his hometown club Kawasaki Frontale, nicknamed the Gremio of Japan, due to the team colours replicating those of the historic Brazilian side. He did opt to attend Tsukuba University before making an appearance for his club, but he made his J-League debut in the 19/20 season, and shone.

Mitoma topped the voting for the J-League’s team of the season, finding the back of the net on 13 occasions as Kawasaki won their 3rd title in 4 years. Upon signing for the Seagulls, he was immediately loaned to Belgian outfit Union Saint-Gilloise mainly for permit reasons, but it did work in Brighton’s favour as Mitoma developed his game further and adapted to the more physical European style of football. 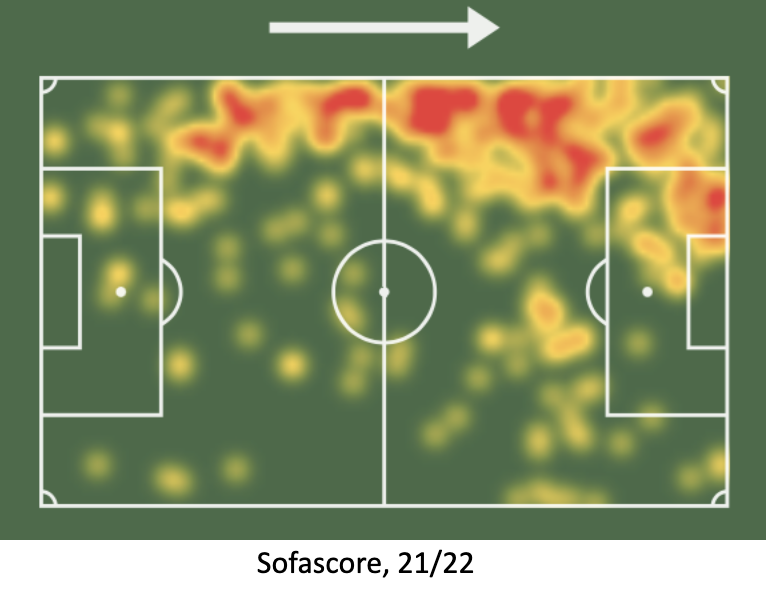 A natural right footer, Mitoma usually operates off the left, in a LM or LW role. He has a great change of pace and agile dribbling style, à la Eden Hazard, which allows him to beat his man on the inside or out, and he has the awareness to know when to play the right pass. His rapid acceleration and quick thinking are highlighted in the below clip, where he puts it on a plate for teammate Ao Tanaka from an impossible angle. The goal helped the Blue Samurai advance to the Round of 16, and subsequently waived auf wiedersehen to the Germans, as they were knocked out of the World Cup.

Mitoma is also a defensively solid player, winning 82% of his tackles this season (14 out of 17, INFOGOL). His high work rate is one of the reasons he was deployed at LWB in the first half of the season, with Mitoma able to carry the ball up the field, using his blistering pace and dribbling to switch from defence to attack in a flash. However, since De Zerbi switched to a back 4, Mitoma has flourished and made the LM role his own, elevating his game in the past two months.

After earning his first league start in the 4-1 demolition of Chelsea at the Bridge in October, Mitoma has contributed 4 G+A in his last 6 Brighton appearances, starting all 4 of the league games and coming off the bench in the Carabao Cup games. He ranks 6th in the league for successful dribbles p90 (2.4) at a success rate of 59.1% and ranks 4th in the league for xA, averaging 0.34 p90 this season (FOTMOB). The graphic below shows the directness of Mitoma’s runs, primarily picking up the ball closer to the touchline and slaloming his way into the opposition box. 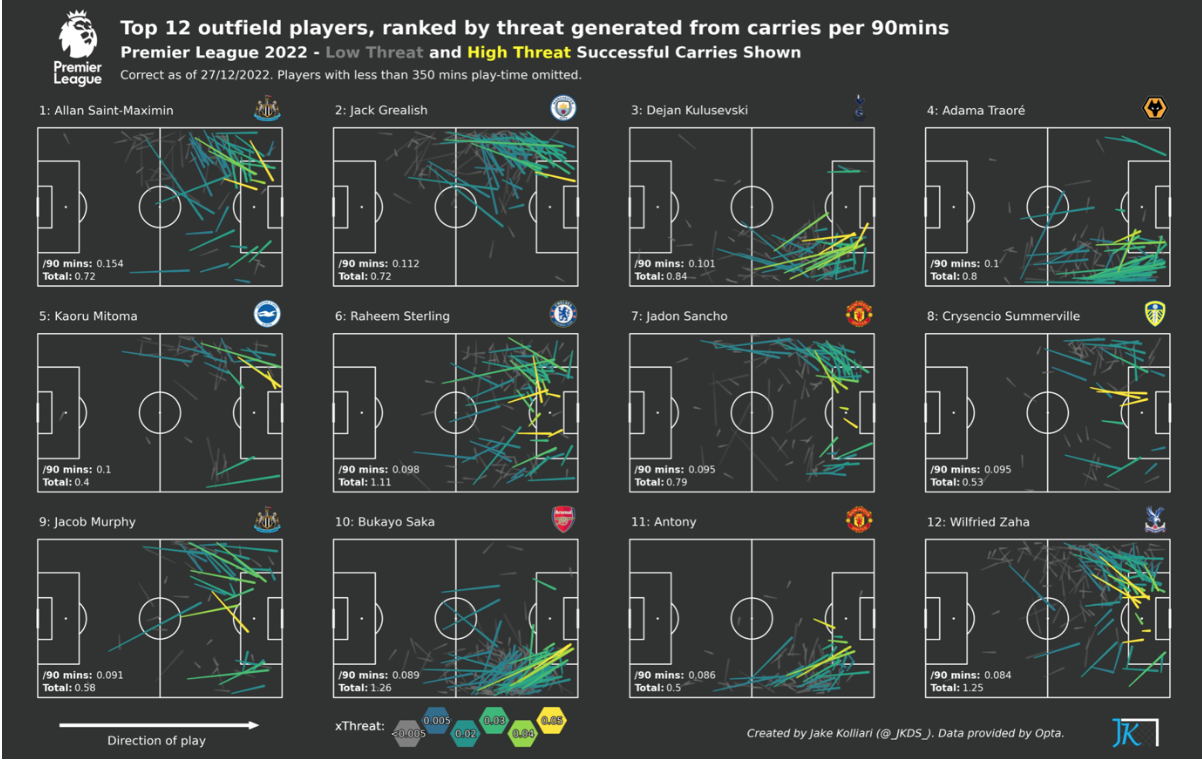 One small criticism is his lack of selfishness, where he can go for a shot instead of looking to tee up a teammate, taking only 8 shots in the league this season. But that could be the next step in his development as his confidence grows and his position in the team is cemented.

In his limited minutes this season, Mitoma is off the scale for xT in the league however, topping the chart for xT from carries and ranking 4th in xT from passes. When both metrics are combined, he’s in a league of his own. He is a unicorn in the way he is so effective from both his carries and passes. The chart below shows how impressive Mitoma has been, operating at a similar level to Kevin De Bruyne, who is seen as one of the most creative players in the world. 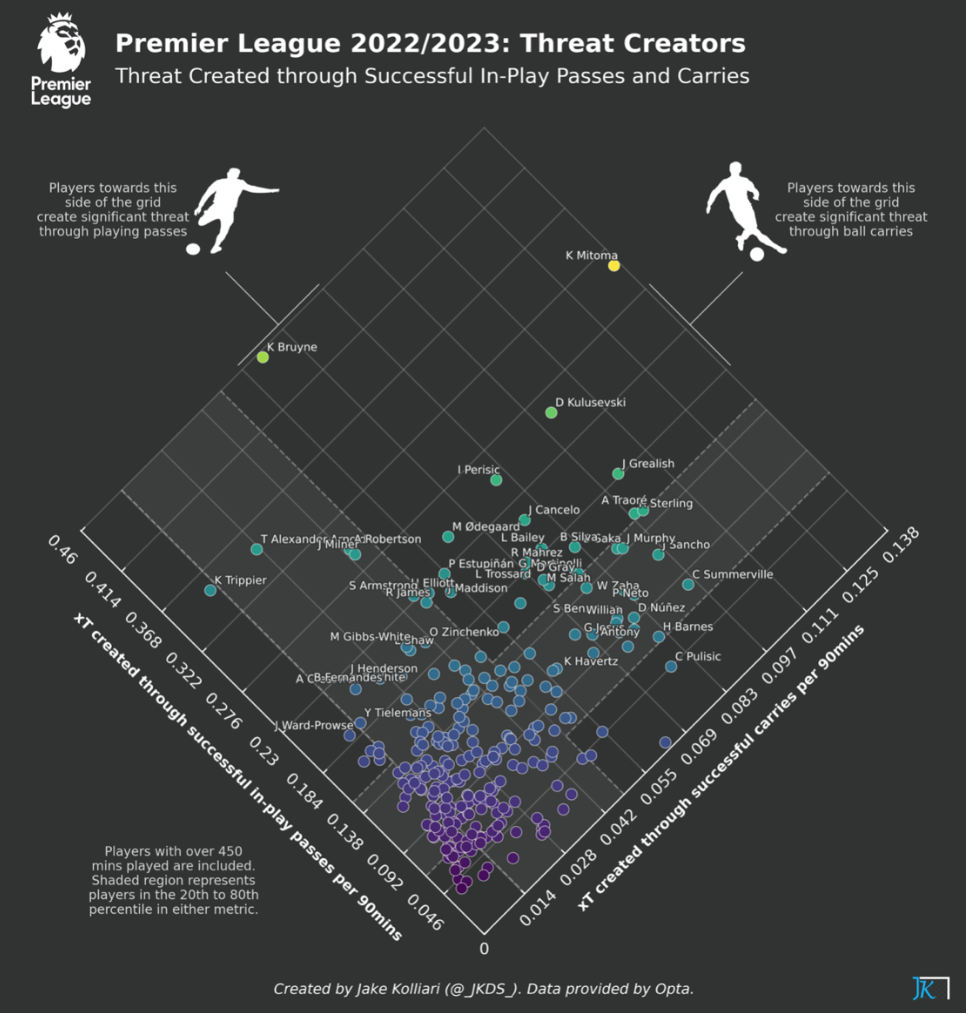 Even though any comparison with De Bruyne is warranted, the lack of minutes Mitoma has played should be considered, with Mitoma playing just under 500 mins in the league and the Belgian playing just over 1600. But rather than decrease the significance of Mitoma’s xT, it highlights the effectiveness of both players in their respective teams’ system. Of course, with Brighton being the data-focused club they are, they will be well aware of what Mitoma brings to the table. A great explanation of xT can be found here for those less familiar:

The self-sustaining model at Brighton works like clockwork and Mitoma has appeared at a time when the future of current main man Leandro Trossard has been uncertain. Mitoma has started the second half of the season on fire and looks set to be a key figure in the Brighton attack for the remainder of the 2022/23 campaign.

Mitoma is more than capable of standing up to the challenge and he has continuously raised his level at every club he has joined. The next logical step for Kaoru Mitoma to improve further is to add goals to his game, and in his last outing against league leaders Arsenal, he certainly did that, slotting past Aaron Ramsdale like a seasoned pro when he got his sight on goal.

He may not be the flashy name fans of top clubs would want to sign, but he has the skill set to play significant mins in a Champions League-level side and should be on the radar of all the top clubs. With his contract expiring in June 2025, Brighton would do well to consider extending this before the summer transfer window, to maintain their bargaining power in any potential sale, which come June, may just be sooner rather than later.