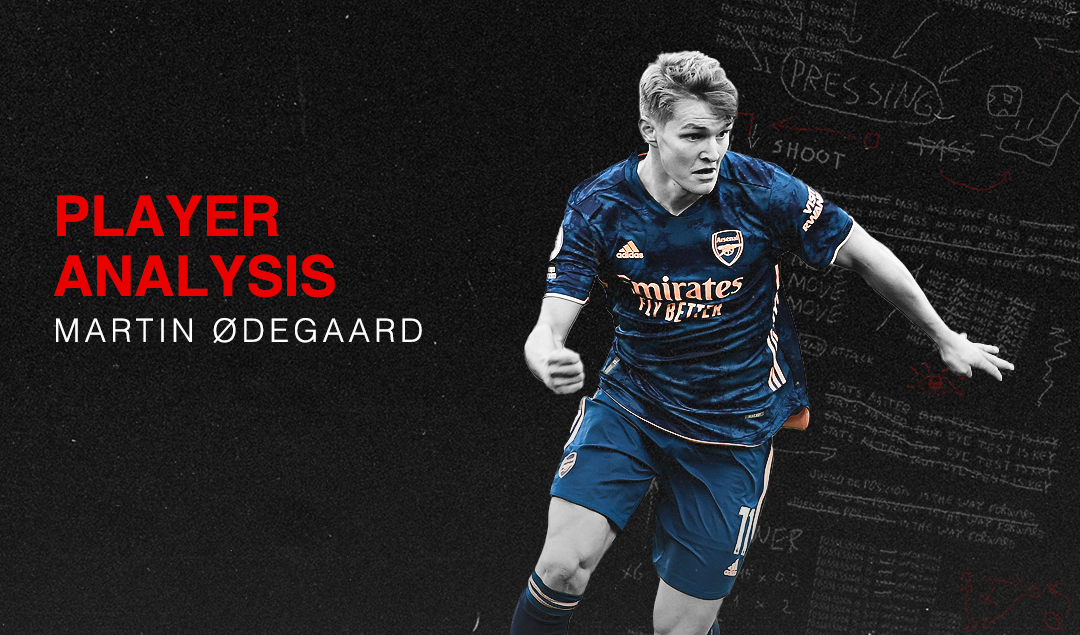 Following what was a bright end to a largely dull campaign, Arsenal fans were hopeful of an exciting season under rookie manager Mikel Arteta. The triumphant victory of the FA Cup instilled fans with belief that the Spaniard can guide them back to where they belong – playing Champions League football.

But it quickly came crashing down for the Gunners, who endured their worst start to a Premier League season in the club’s history. Worryingly, Arteta’s side sat 15th place in the table on Christmas Day, just three points above the relegation zone. Attempting fewer shots than Fulham, there was an obvious void of creative spark. With new signing Willian struggling to make any sort of impact, and their main creator, Mesut Ozil, on exile, Arteta turned to 20-year-old Emile Smith Rowe.

Since integrating Smith Rowe into the team on Boxing Day, Arsenal drastically improved. The Gunners went on a seven-game unbeaten run in the league, only for it to end in unfortunate circumstance against Wolves due to a poor refereeing decision to send off David Luiz.

Despite the impact Smith Rowe had on the side, the club still opted to pursue an attacking midfielder to bolster their options going forward. This would relieve the youngster of the burden and the pressure expected of him.

Arteta idealised bringing in an attacking midfielder that can operate centrally as well as from the right, which is likely what he had in mind for Willian at first. But it hasn’t quite worked out for the Brazilian, leaving Arsenal heavily linked with Norwich City’s Emiliano Buendía, who has been tearing it up in the Championship this season.

However, Arsenal were quickly put off by the hefty £40 million price tag for the Argentine and decided to look elsewhere. When Real Madrid’s out-of-favour Martin Ødegaard became available for loan, Arsenal jumped at the chance to bring the man once described as “the Norwegian Messi” to the Emirates. And, similarly to Smith Rowe, Ødegaard has had no issue slotting into Arteta’s side.

Making his Arsenal debut off the bench against Manchester United at the end of January, Ødegaard showed glimpses of his innate ability to create attacking opportunities. The 22-year-old earned his first start against the energetic Leeds United two weeks later, where his impressive performance helped end a three-game run without a win for the Gunners.

Many feared Ødegaard’s arrival would harm the development of Smith Rowe, but crucially that doesn’t seem to be the case. They both started in the victory over Leeds and have done multiple times since, proving that the two can coexist in the same team.

When they play together, Ødegaard operates as the traditional number 10, whilst Smith Rowe plays from the left, often drifting inside whilst Tierney (the left-back) overlaps out wide. Meanwhile, Ødegaard will often roam and operate the right half-space, combining with the right-winger and the right-back. This is illustrated in the pass/heatmap below from his latest display against West Ham. 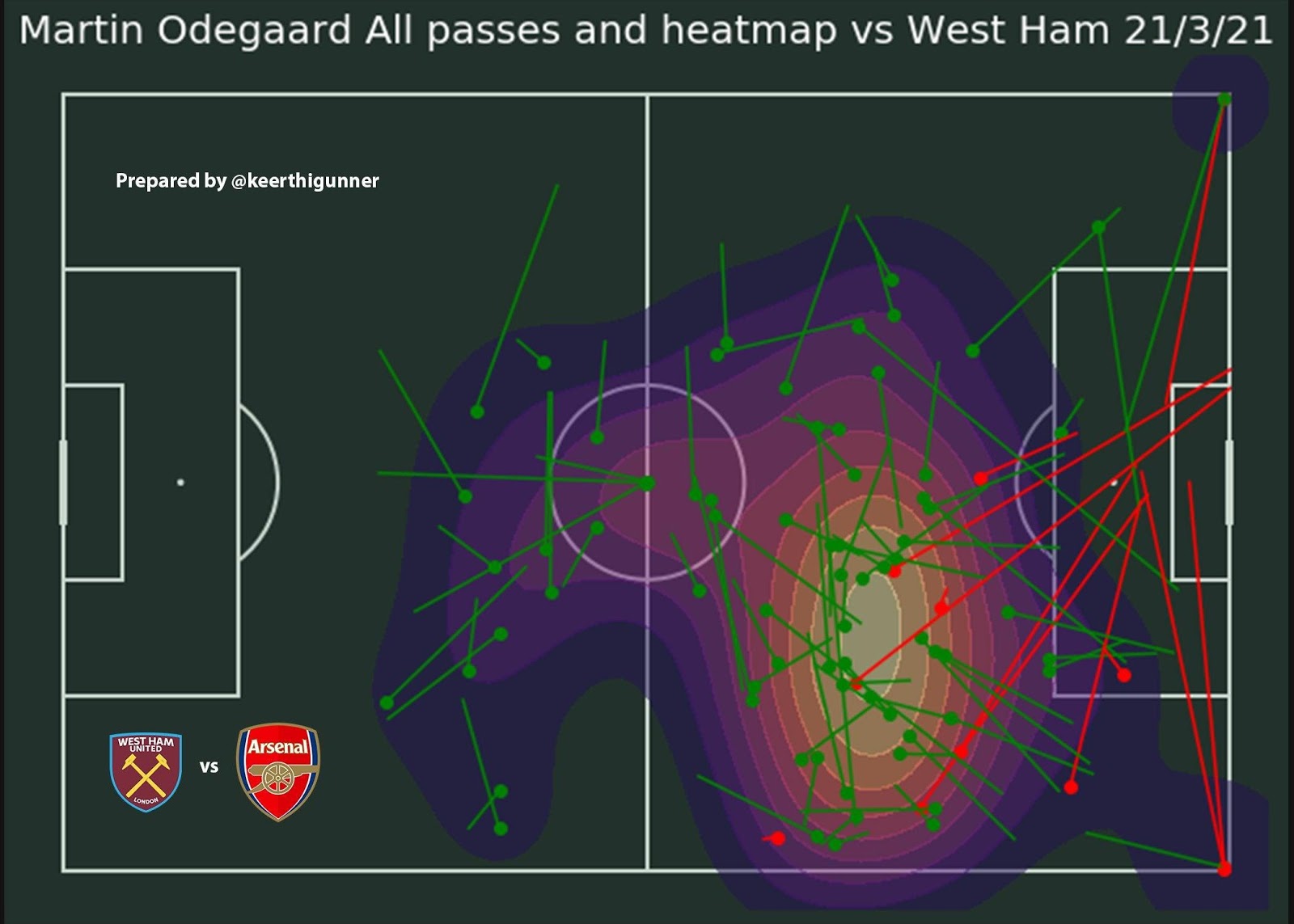 The attacking midfielder is making swift success of his spell in North London, which is helped by being allowed to reprise the role he played at Real Sociedad last season. Ødegaard thrives in the right half-space, where last season, alongside Lionel Messi, he was far and away the La Liga leader in terms of creative passes. In fact, his numbers were only bettered across Europe’s top 5 leagues by the likes of Messi, Neymar and Kevin De Bruyne. 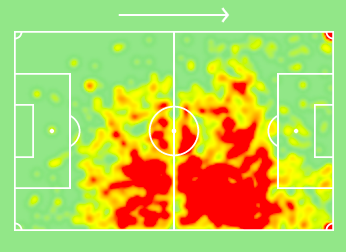 Ødegaard has carried this creative knack through to his stay at Arsenal, where he’s continued to yield impressive creative numbers during his 12 appearances. He leads the way at Arsenal for key passes per 90 in all competitions with 2.5, as well as edging in front of his English counterpart, Smith Rowe, for expected assists (xA) with 0.24 per 90.

The Norway captain’s numbers for key passes also fare well against other midfielders in the Premier League – only bettered by a small cluster of players including Kevin De Bruyne, Bruno Fernandes and Mason Mount. 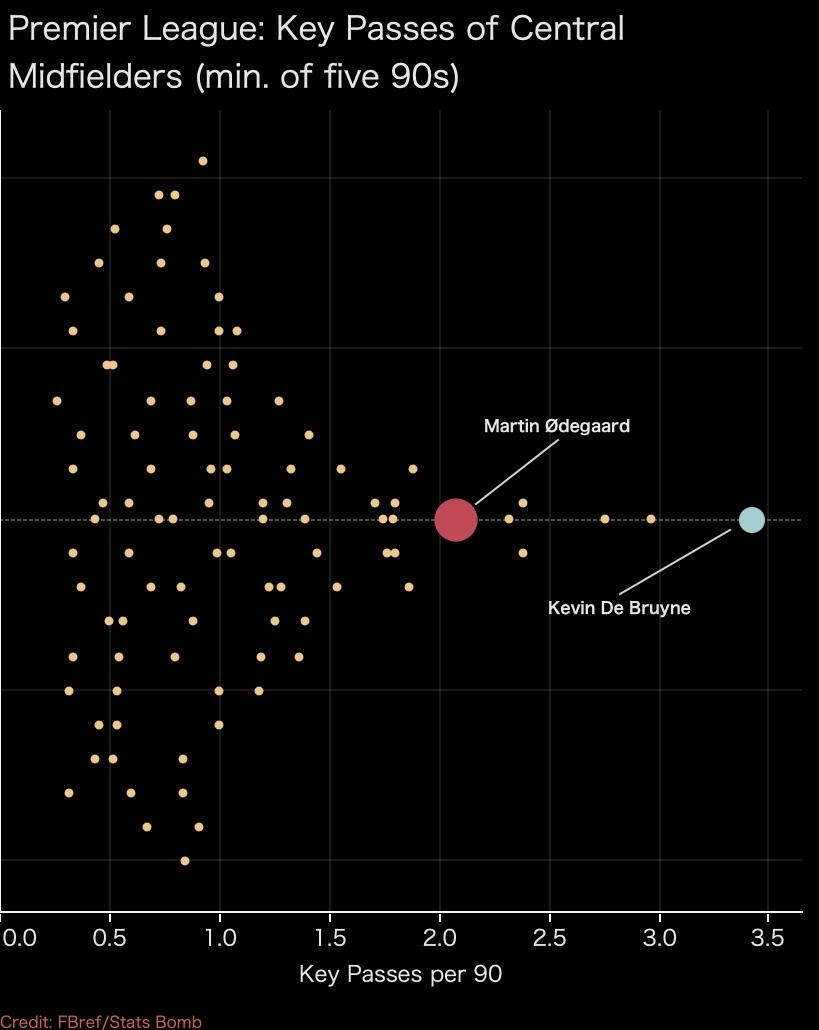 Additionally, Ødegaard has averaged a team-high 5.4 shot-creating actions per 90, whilst yielding 0.7 goal-creating actions – only bettered at the Gunners by Nicolas Pépé (0.8). Alongside De Bruyne, the Norwegian leads the way for live passes that lead to an attempt on goal in the Premier League. Only a handful of midfielders exceed his numbers for progressive passes per 90, yielding a similar amount to Rodri and Youri Tielemans. 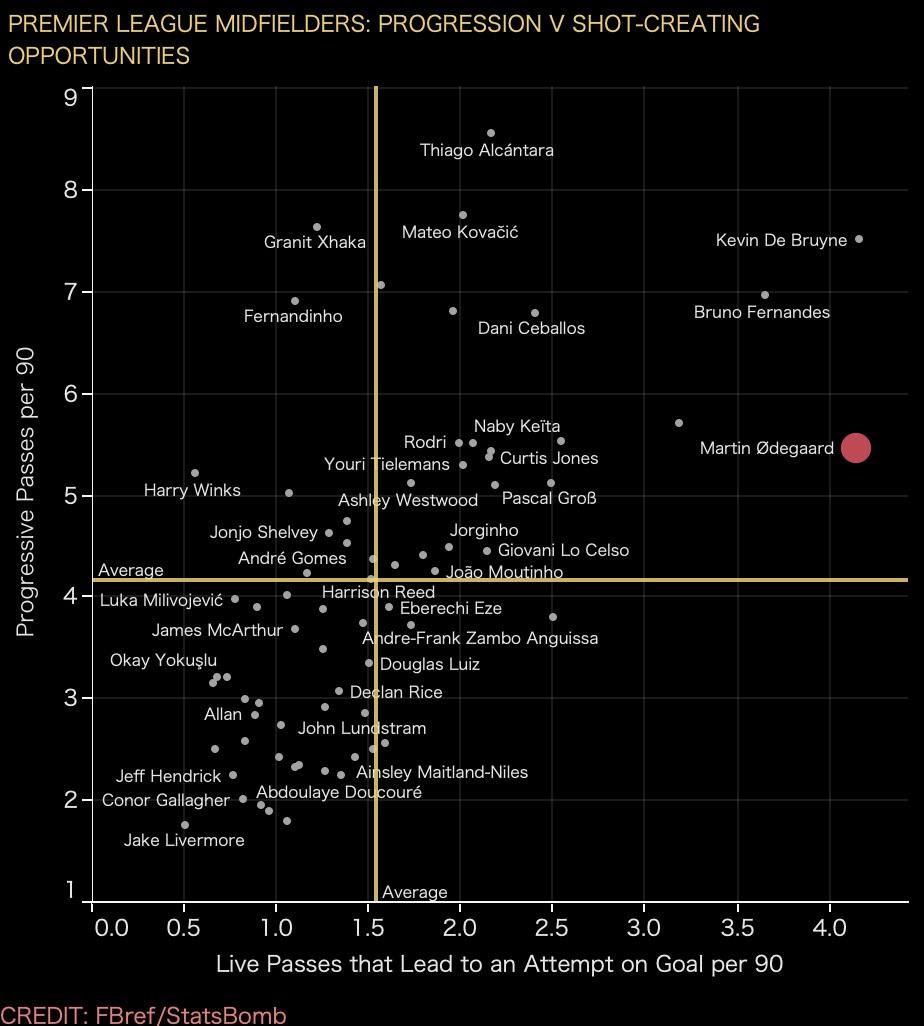 It’s not just passing Ødegaard excels at. He’s able to dribble out of tight spaces with ease, gliding between players with the ball sticking to his feet like glue. He also has the capability to score from range, which he showcased in the Europa League against Olympiacos, hitting the net from 30 yards out. He added to his tally just three days later in the North London Derby helping Arsenal beat their rivals for the first time since 2018 and capping off an excellent week for the Norwegian.

Arteta’s system requires the ‘number 10’ to join the striker in the front line as part of a 4-4-2 shape off-the-ball. Here Ødegaard is required to press the opposition players in the build-up phase. Up to now, his numbers for defensive pressures are superb, justifying his manager’s recent faith in him. The 22-year-old is averaging 20.7 pressures per 90, succeeding in 6.0 of them. This places him in the 93rd percentile of Premier League attacking midfielders for successful pressures.

Ultimately, Arsenal are a completely different side to the one we saw helplessly struggle through the back end of 2020. With both Smith Rowe and Ødegaard now in Arteta’s artillery, Arsenal are a far more dangerous threat in the offensive third. In fact, since Christmas Day, only Manchester City, Manchester United and Leicester City have collected more points than the Gunners.

Recently named Norway’s captain at just 22, Ødegaard is already proving to be a key player for Arteta, showcasing not only his technical skills but his leadership qualities too. His impactful start to life in North London has got Arsenal fans hoping it’s not just a short stay. But the long-term future of the player remains rather unknown.

Despite Zinedine Zidane’s reluctance to guarantee regular game time for the Norwegian, the player still has his admirers at the Bernabeu. But the same was said for the likes of Achraf Hakimi and Sergio Reguilón, who have since been sold by the club. The likelihood is these bright younger players were offloaded as they can attract the sizeable fees that are needed to fund any major additions.

With the Kylian Mbappé rumours heating up as the summer nears, you have to wonder if Ødegaard will be a player they look to get off the books in order to make the deal for the French superstar possible. If this is the case, Arsenal will likely be placed at the front of the queue, with Ødegaard publicly stating he already feels at home at the club.

Whether Arsenal will be able to afford the player will largely depend on whether they can qualify for Europe, with their best chance seemingly being going all the way in the Europa League. Either way, Ødegaard’s attitude both on and off the pitch makes it clear that he is determined to help Arteta’s side finish this campaign as they did last – lifting a trophy. Perhaps more crucially, the Norwegian could well be the key that unlocks the door to a return to Champions League football.