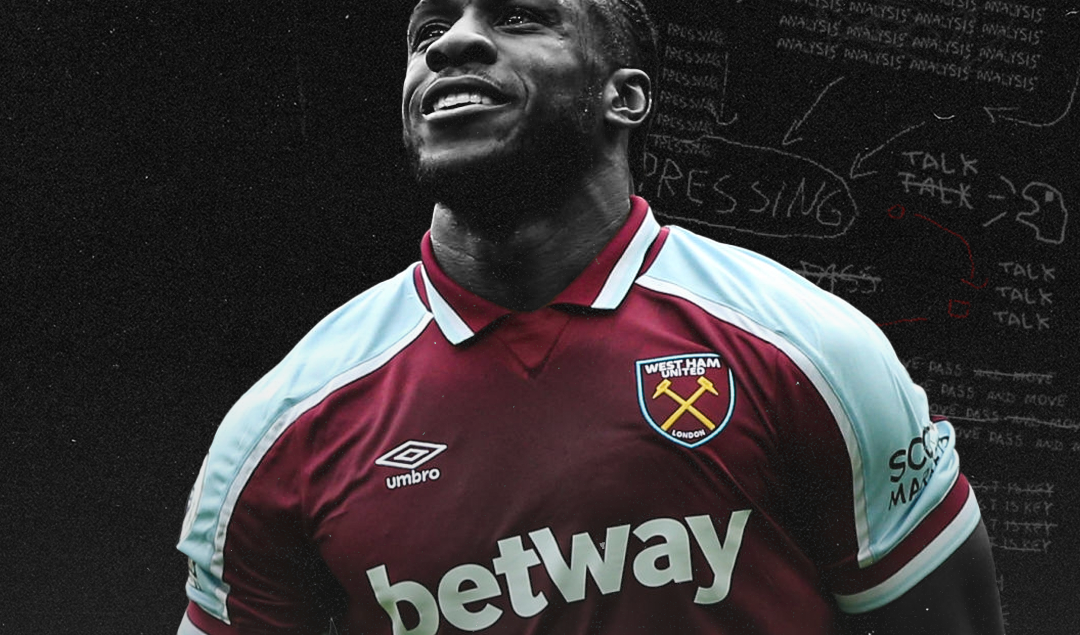 As the quote from Dirty Dancing goes, nobody puts Michail Antonio in a corner. Although much has been written about Johnny Castle’s famous one-liner, at its heart is a message about the expression of talent. In Castle’s eyes, Baby Houseman was simply too gifted to be left aside. She had to be the centre of attention, or else her skill would go to waste.

Of course, the Hammers’ 50-goal man hasn’t excelled in every role that he has been asked to play. During the Slaven Bilic era, West Ham fans often cried: ‘Antonio isn’t a right back’, irked by the fact that their future talisman’s offensive prowess was being wasted in defence. Which brings us back to Dirty Dancing.

After scoring his record-breaking 48th Premier League goal for West Ham, Antonio sprinted to the bench, grabbed a life-sized cardboard cut-out of himself, and danced like Johnny and Baby. Antonio’s message, although delivered humorously, was clear: he’s to be taken seriously from now on. And rightly so.

Since crashing his car on Christmas Day while dressed as a snowman (yes, that really happened), Antonio has performed at an elite level. In his last 44 Premier League starts, Wandsworth’s finest has 35 goal contributions to his name. Since the start of the 2021/22 season, Antonio has amassed three goals and two assists while outshooting his xG for good measure.

The prospective Reggae Boy’s underlining numbers are similarly eye-catching. Over the last 365 days, Antonio ranks in the top-quarter of ‘big five league’ centre forwards for non-penalty goals, shots, assists, non-penalty xG+xA, and shot-creating actions. In other words, West Ham have unearthed a player with a flair for creating and scoring chances – he does traditional striker things well.  However, Antonio’s influence is not limited to his work in the final third, he’s a positive influence on both sides of the transition, too.

The former full-back is a keen dribbler these days, ranking in the 85th percentile of forwards for carries into the penalty area and is rated even higher for dribbles completed (91st percentile) and players dribbled past (94th percentile). The stats don’t lie, Antonio is instrumental to David Moyes’ counter-attacking scheme.

He also makes his presence known on the other side of the ball. In West Ham’s win over Leicester City, Antonio pre-empted a back pass to Kasper Schmeichel, broke up the play, and provided a crisp assist to Saïd Benrahma. Although it’s difficult to put a number on a player’s positional intelligence, it’s clear that Antonio knows his way around the pitch. So, how will history perceive the man who shattered Paolo Di Canio’s goalscoring record in East London?

Well, critics will make reference to Antonio’s wooden style, they always do. Look, we’re discussing a 94 kilogram forward who was shifted to a central role in his late 20s – if people are going to criticise Antonio for anything, it’ll be linked to his unconventional stride and occasionally wonky first touch.

But does it really matter that Antonio charges, rather than glides, across the surface at the London Stadium? His numbers suggest not and purveyors of the eye test are yet to find a reason to suggest that Moyes should look elsewhere for a starting forward.  “I wanted to be Baby but I’m 94kg,” Antonio said of his celebration against Leicester, “I wanted someone to Baby me… so I decided to do it to myself.”

Which brings us back to Dirty Dancing, a film that ends with the protagonist’s father – Jake Houseman – admitting to past mistakes. “When I’m wrong, I say I’m wrong. You looked wonderful out there,” Jake told Baby. The same must be said of Michail Antonio, who is having the time of his life as West Ham’s number nine.