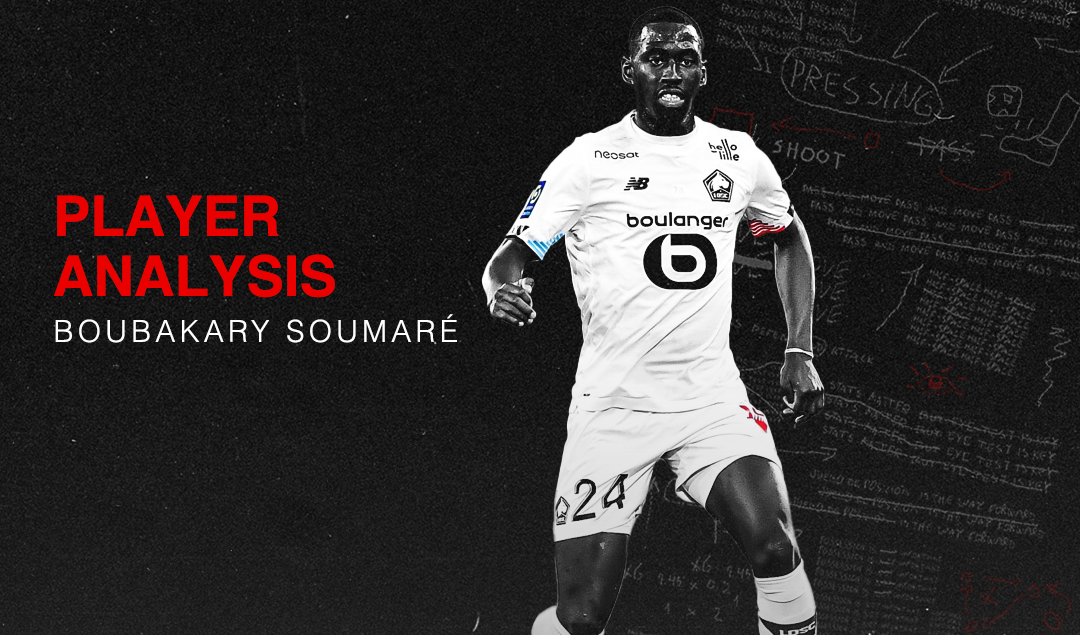 One of the most prominent stories doing the rounds in the media at the moment is the reported transfer of French midfielder Boubakary Soumaré from Lille to Leicester City. The deal seems to be on the verge of completion, and there has been widespread excitement among fans for what seems to be the arrival of an extremely talented individual.

Soumaré joined Lille in 2017, having spent time at the academies of both Paris FC and Paris Saint-Germain, making 8 appearances for the latter’s B team. In his nearly 4 years at the club, he has made 72 appearances thus far, becoming a regular in the side only last season.

His development may be slightly behind some of the more prominent names around his age, but Soumaré has already shown glimpses of his potential as a player at the very top level of the game, and this season has been an important cog in the Lille title charge, as well as their European campaign. This piece will explore his style of play, strengths, weaknesses, and how he might fit in at Leicester.

To start with, this is Soumaré’s heatmap for this season. Often playing as part of a midfield two alongside one of Benjamin André, Renato Sanches or Xeka, Soumaré’s main zone of operation is the left-side midfield channel, just inside either half. 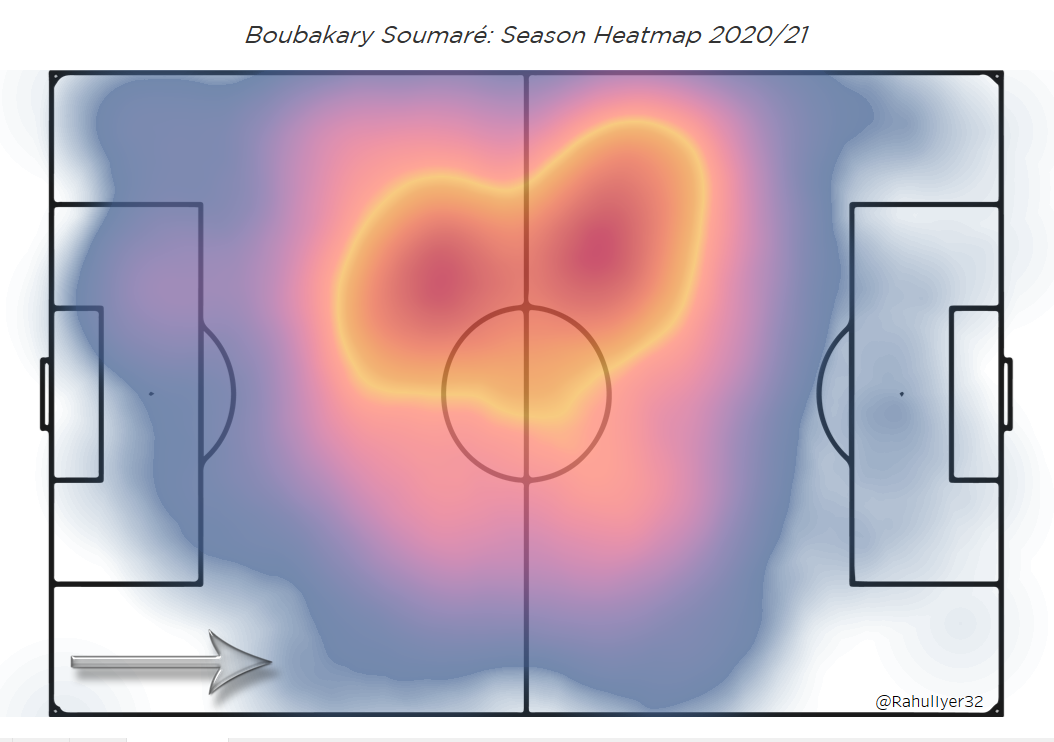 Under manager Christophe Galtier, he has started 23 games and made 15 substitute appearances for a total of 2040 minutes of action, in Ligue 1 and the Europa League. To narrow down what exactly he does on the pitch, here is a data-driven look at his performances this season. 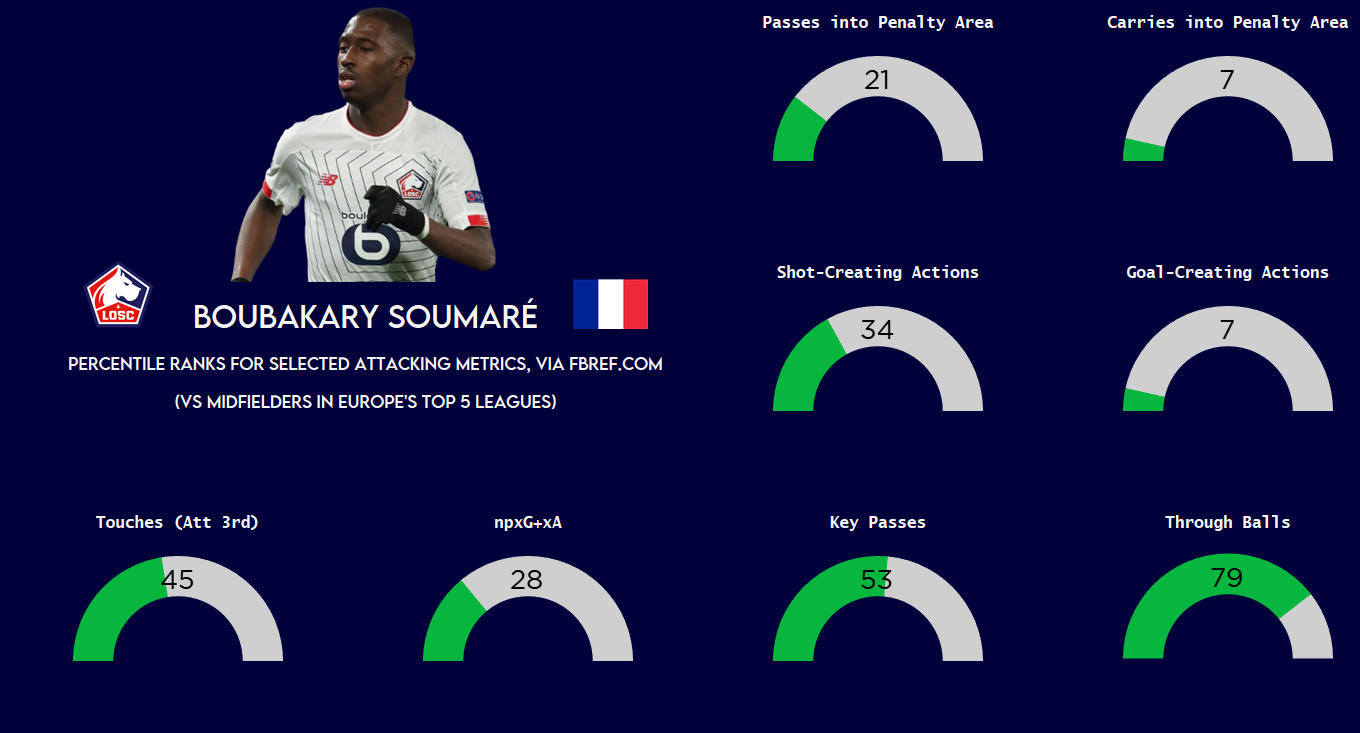 In an attacking sense, most of Soumaré’s numbers stack up poorly. He doesn’t contribute directly to his team’s scoring, with a grand total of 1 goal and 4 assists in 6090 minutes of senior football. He hasn’t been very ‘unlucky’ either, with the expected numbers for those metrics clocking in at 1.5 and 3.7 respectively.

In fact, a quick glance at his touches in the attacking third of the pitch gives us a bit of an idea why those numbers are so low-he simply doesn’t get on the ball in advanced areas all that much. Clearly, Soumaré isn’t in the Bruno Fernandes/Kevin De Bruyne/James Maddison mould of creative midfielder, or any kind of creative midfielder for that matter. So how does he look, defensively? 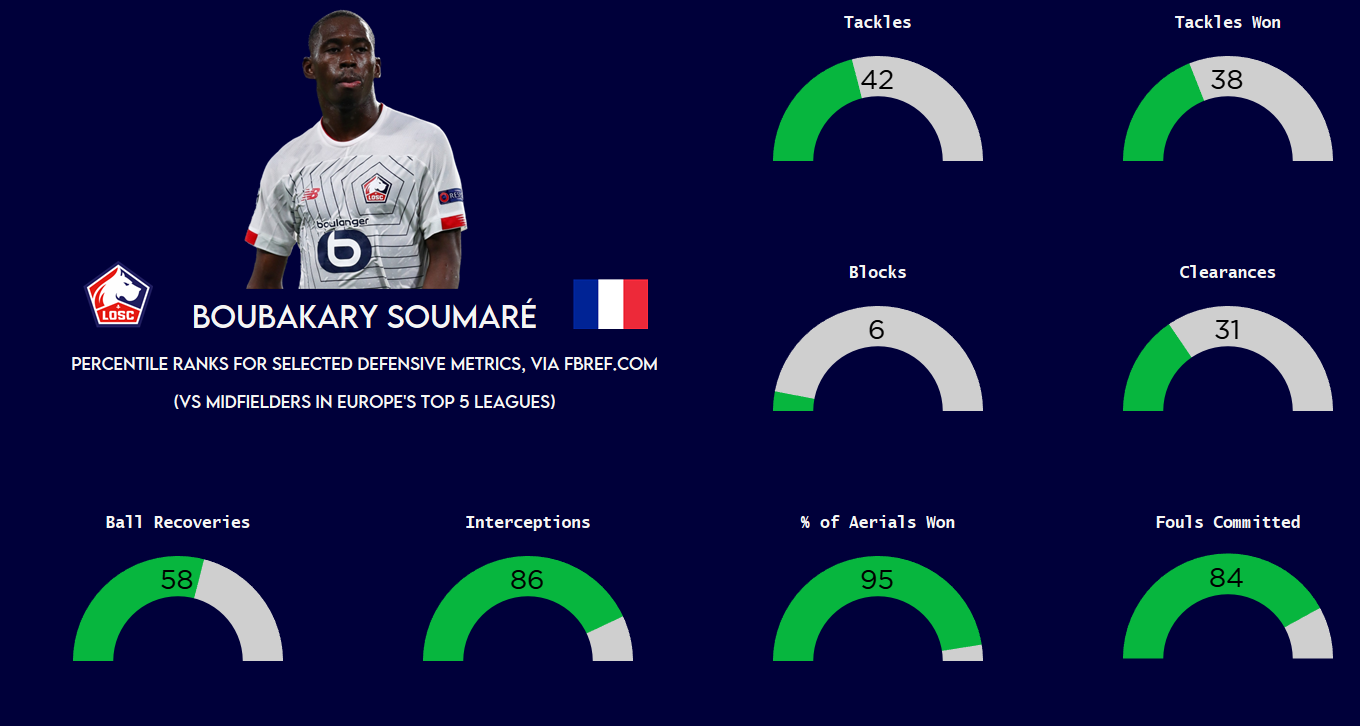 When it comes to measuring defensive contribution, using numbers is always a little bit dicey, but there are a few surface observations that can be made. The low numbers Soumaré puts up for blocks and clearances tell us that he’s not very active when it comes to limiting the opposition in and around his own penalty area.

He also commits very few fouls (around 1.3 per game) for a midfielder, although part of that is down to the fact that he doesn’t attempt to tackle opponents in the first place. Even when he does, his success rate is not very impressive, which allows one to make the not-so-big leap to the conclusion that he is actively discouraged from diving into challenges.

The two metrics where Soumaré stands out are interceptions and the percentage of aerial duels won. Both of these have a physical aspect to them. At 6’2”, he has a natural height advantage over many of his opponents in the middle of the park. His long legs, combined with his tendency to stay on his feet, means that instead of tackling, he tends to rack up more interceptions than the average midfielder.

However, these numbers don’t look like enough for him to be a player rumoured to be in high demand. This is where the following chart makes things clearer: 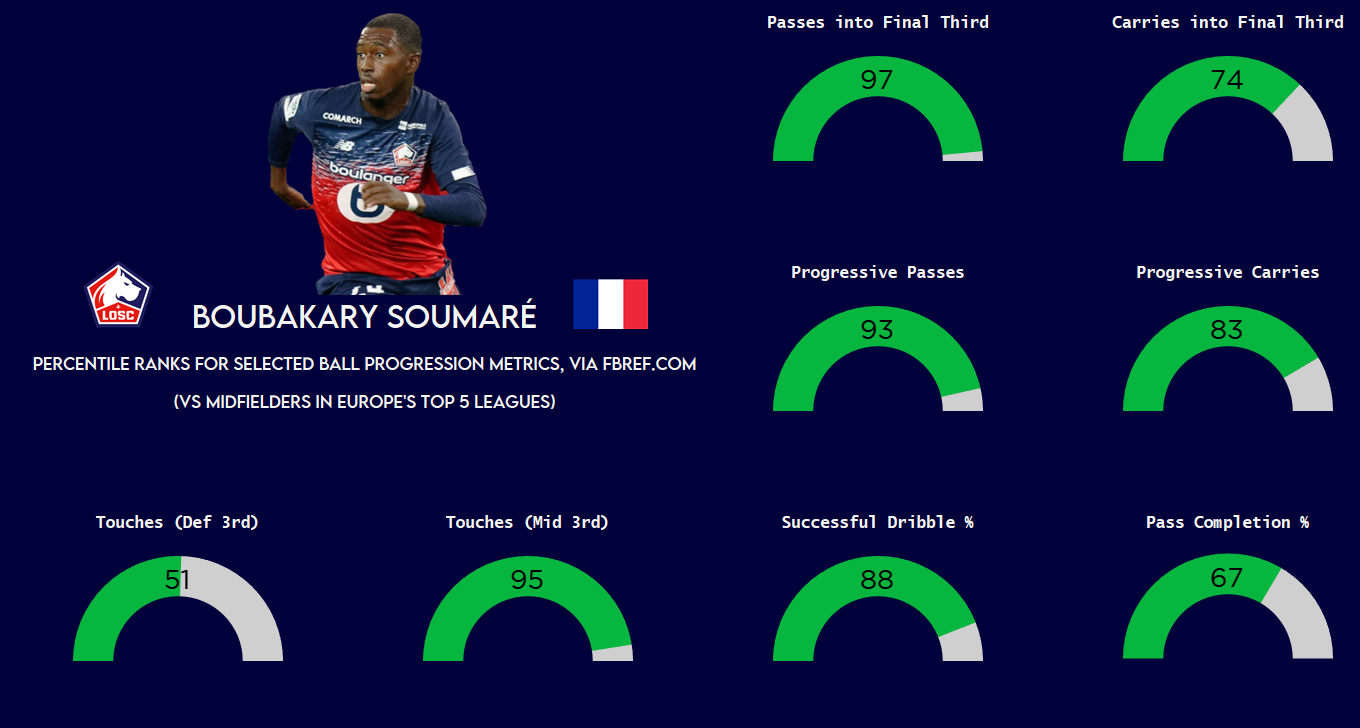 When it comes to ball progression, Soumaré is, without exaggeration, one of Europe’s best. As viewers, many tend to underestimate the value of a link player in midfield-one who can effectively and consistently move the ball from deeper areas, closer to the opponent’s goal, enabling defenders to get their positioning correct, and allowing attackers the luxury of knowing that they can stay high and stretch defensive lines, as the ball will find its way to them.

Whether passing the ball or carrying it himself, Soumaré poses a very real threat to the opposition. On the subject of being a link player, a look at the most common types of passes he receives and completes shows us, in a nutshell, what his main role in possession is.

The passes Soumaré receives are mainly from a full-back high up the pitch, or a winger dropping slightly deeper, as well as lateral passes from midfield and passes to feet from deeper positions, likely the centre-backs. He does venture slightly higher up the field on occasion, but that is fairly rare. 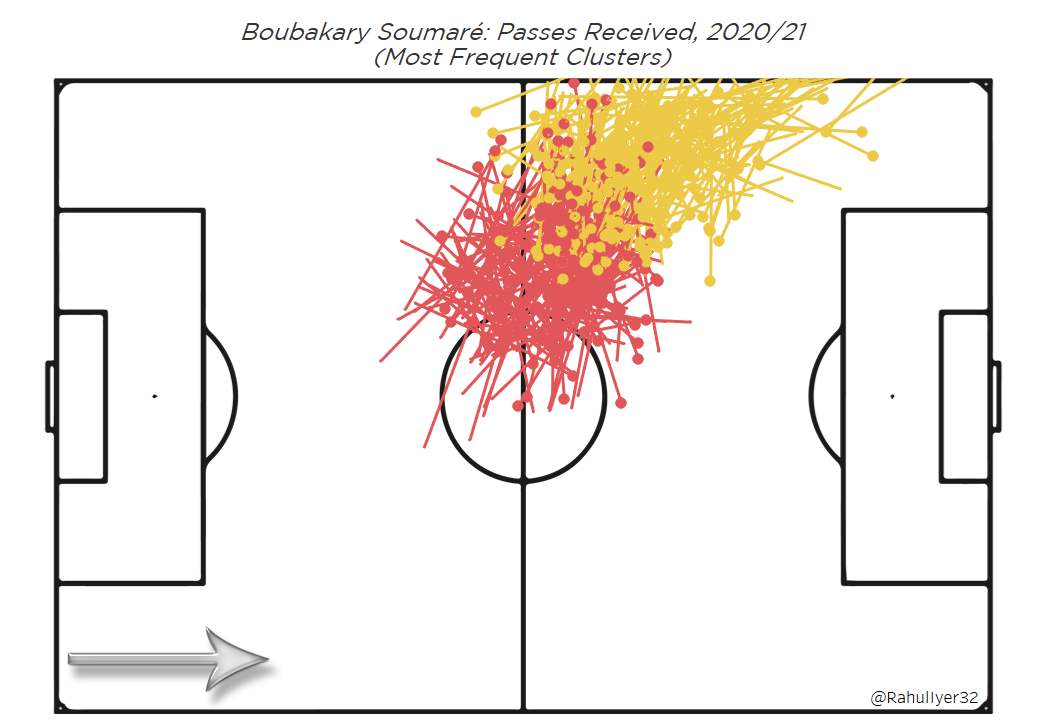 Looking at where Soumaré himself passes the ball, though, it is fairly easy to see the value he adds to his team. Picking the ball up in deeper positions before releasing a runner on the wing, or picking out players in advanced central areas, creates credible threats that opposing defences have to deal with, putting them on the back foot. 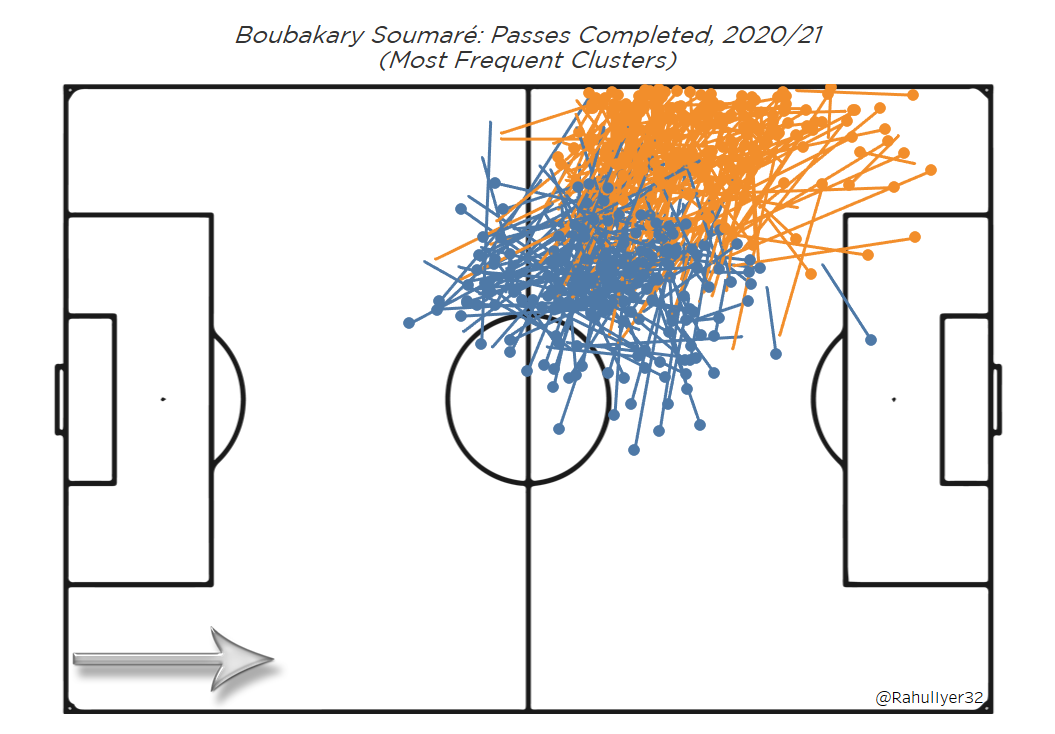 As always, numbers and statistics can only tell us so much about a player, and there is nothing like watching them play. One interesting observation about Soumaré in particular is that he has been described as shy and reserved by several of his coaches, both at youth and senior level. This sometimes comes across in his general play, as he takes time to grow into games, not starting particularly quickly.

It is also why he is best utilised as a starter, and is not always a reliable substitute for a coach who is looking to impact the game. In this Lille side, as mentioned earlier, Soumaré plays as part of a midfield double pivot. He has three main responsibilities, in three different phases. When his team is in possession: To stay deep and provide cover against counter-attacks, make himself available as an outlet for recycling possession, and occasionally act as a decoy runner.

When in possession himself: To progress the ball, either by carrying it himself, or moving it on to the more creative, attacking players. When the opposition is in possession: To stay on his feet, stay tight to his man and intercept passes.  Broadly, Soumaré progresses the ball in one of two ways; line-breaking passes direct to the feet of an attacker dropping off, or switches of play into space out wide, most often for an overlapping full-back:

What is interesting to note is a trend that emerges in his passing, regarding what is known as the ‘message of the pass’. In short, the theory of communication via passing says that the qualities of a pass such as its speed and direction essentially communicate to the receiver what their next action should be. For Soumaré in particular, the passes he plays through the middle to progress are often fizzed through, at pace, most probably telling the receiver that it is the right time to inject a bit more urgency into the attack.

Contrast this with his distribution out wide, which is slightly more languid and relaxed, which tells his teammates to hold on and wait for support, or just probe in and around the penalty area. His abilities on the ball are not limited to just passing either, as seen earlier. He can also burst forwards himself, making opponents unsure of whether to stand off him or press him, giving him the chance to leave them behind:

Not only does Soumaré possess the technical ability to keep hold of the ball even under pressure (side note: he ranks better than 75% of Europe’s midfielders for passes completed when put under pressure), but his large frame allows him to ride challenges with relative ease. In addition, his acceleration over short distances is a big asset, particularly in the middle of the park, where it can be used to create separation between himself and an adversary.

Any description of Soumaré as the archetypal midfield ‘destroyer’ is quite inaccurate, given his prowess in a progressive sense. In addition, his defensive attributes make him serviceable, at best. That is not to say there isn’t the possibility for improvement, but it feels moot, given his primary skillset. For example, observe the following clip:

These are just a few examples of how Soumaré helps Lille by breaking up opposition attacks, and a compilation such as this can lead to a slightly warped impression of him. Even looking past his not-so-great tackling numbers, his interceptions could lead to many inferring that he is a good reader of the game.

But it is here that an important distinction needs to be made. Yes, it is true that Soumaré makes a lot of interceptions. But from the (admittedly small) sample in the video, it is visible that many of his interceptions are not as a result of him being in the right place at the right time, but of him being able to make up for it when he isn’t, thanks to his reach and strength.

Now, why this distinction is important is part of a wider discussion on how players may be able to look good in a particular role, but seem deficient even when performing a slightly different one, such as one of a two in midfield, versus the deepest midfielder in a three-man setup. The two roles are similar, but not every player can perform both at the same level of proficiency. Soumaré belongs to this category, mostly due to him not always having the best sense of defensive positioning.

Since it seems as though Soumaré is headed to Leicester City this summer, it is worth having a look at how he might fit into the side. Brendan Rodgers’ preferred midfield pairing has been Wilfred Ndidi and Youri Tielemans, with James Maddison playing in the number ten role, and this is fairly consistent, whether Leicester line up in a 3-4-1-2, or a 4-2-3-1. Maddison is the creative hub in and around the final third, while Tielemans operates between the boxes, with his primary role being the facilitator of ball progression. Ndidi is the out-and-out defensive player in this trio, and an elite one at that.

It is unlikely that Soumaré will arrive and instantly command a starting place in the side, but with the added European games Leicester will play next season, having good squad depth and solid rotation options is a must, and the Foxes have struggled slightly on that front in recent years. In their new signing, they will obtain a convenient midpoint between Tielemans and Ndidi, making it possible for him to play alongside either one of those two, and giving Brendan Rodgers the option of playing Tielemans further upfield if needed.

With forwards in Iheanacho and Vardy, as well as Maddison ahead of him, Soumaré’s ability to get the ball to them efficiently should bear fruit. Add to that the quality of Leicester’s full-backs, with their attacking tendencies, and the setup looks promising for a player like him to slot in comfortably. Soumaré could even play as the lone defensive midfielder in any emergency situations, but that is unlikely to work if Leicester play with 4 across the back. He would require the added security of a third defender.

At approximately £20 million, the deal represents an absolute steal for Leicester — particularly if Soumaré lives up to expectations. All signs point to this being another success story for the club’s recruitment department, and it will certainly be exciting to see how the player himself develops in England.