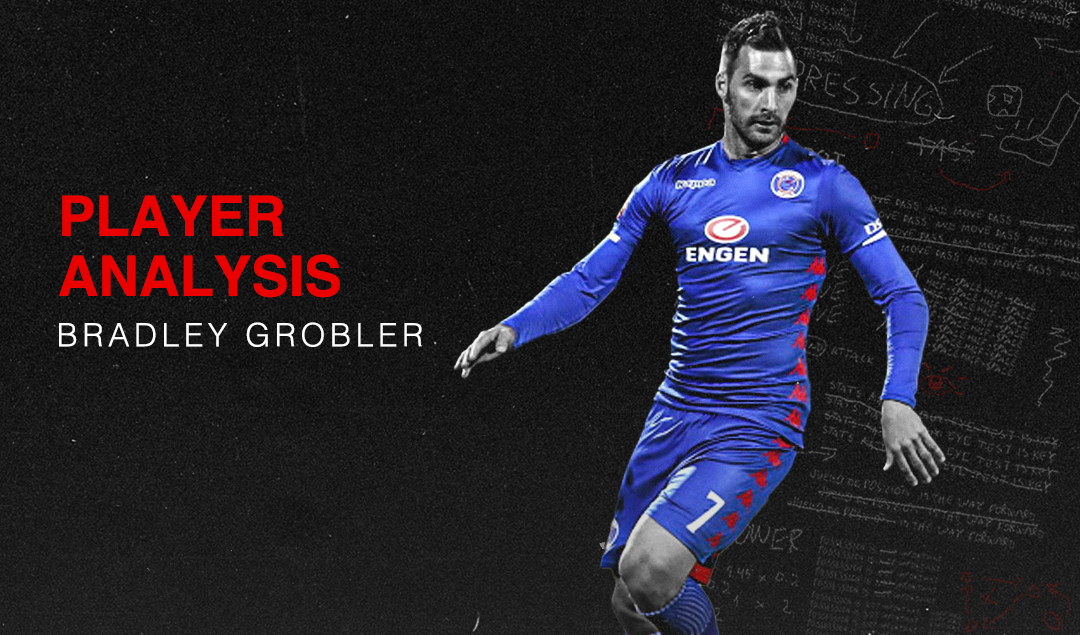 Things were all square between SuperSport United and Kaizer Cheifs at the Lucas Masterpieces Moripe stadium before Bradley Grobler lobbed the ball into the net, following an Itumeleng Khune mistake. In what already is a heated race for the Lesley Manyathela Golden Boot, Grobler has laid the foundation for his most prolific season ever. He has so far racked up seven goals in seven appearances for Matsatsantsa, only equal to Themba Zwane of Mamelodi Sundowns and just one above AmaZulu’s Luvuyo Memela (6). 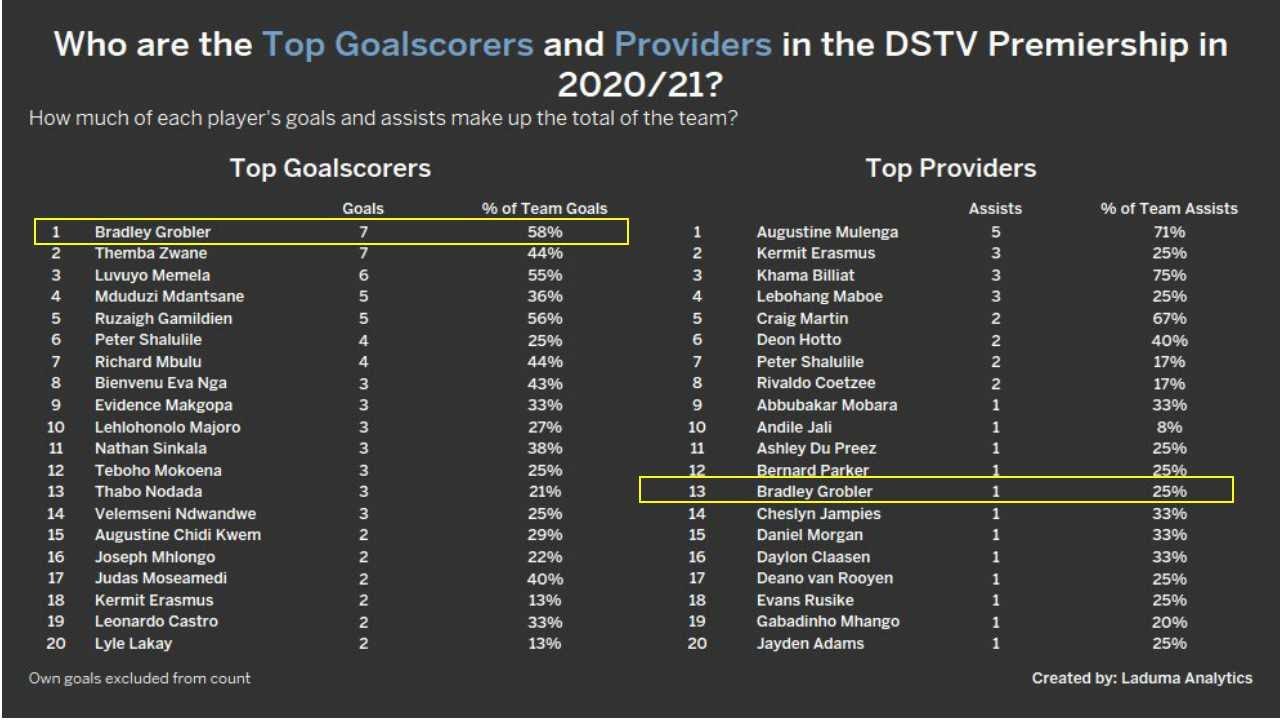 The logs above display how much each player’s goals and assists make up the total of the team. Grobler’s 7 make up 58% of Supersport United’s goals so far this season. Instrumental, he is. Over the years he has been a consistent goalscorer in the top division, and in the 2019/20 ABSA Premiership season, only Gabadinho Mhango (16) and Peter Shalulile (16) have registered more goals in the PSL than Grobler (14).

Grobler is a classic centre forward who makes a living from converting goal-scoring chances. He is an unapologetic traditional No 9 – there is nothing modern about how he applies himself as a centre forward; making runs off defenders’ shoulders, poaching goals from inside the penalty area, and holding up play – his main forte.

As teams spread the pitch in an attempt to build attacks, Grobler is patiently waiting for a transition that he can take advantage of. The goal he scored against Cape Town City, is the perfect example of his predatory instincts and, excellent positioning and movement. Jamie Webber intercepts the ball in the middle of the park, before playing a lobbed pass to Grobler who has looked over his shoulder to see where space is, adjusting his movement and making a run behind Keanu Cupido – who misjudges the flight of the ball. 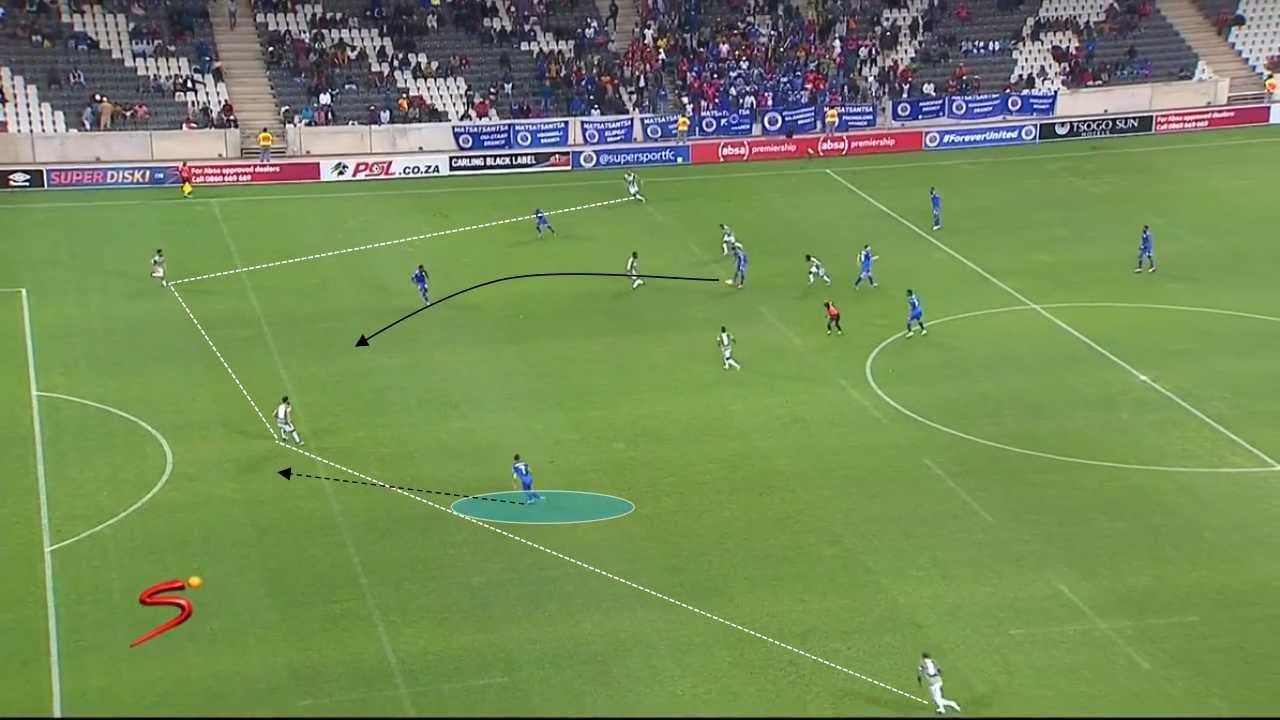 When the ball reaches him behind the defence, he has the quality to open his body and calmly pass the ball through the legs of the goalkeeper and into the back of the net. To end up in such a great attacking position, Grobler positioned himself on the blind side of both the City centre backs. His is well-positioned away from the action – where everyone’s attention is. 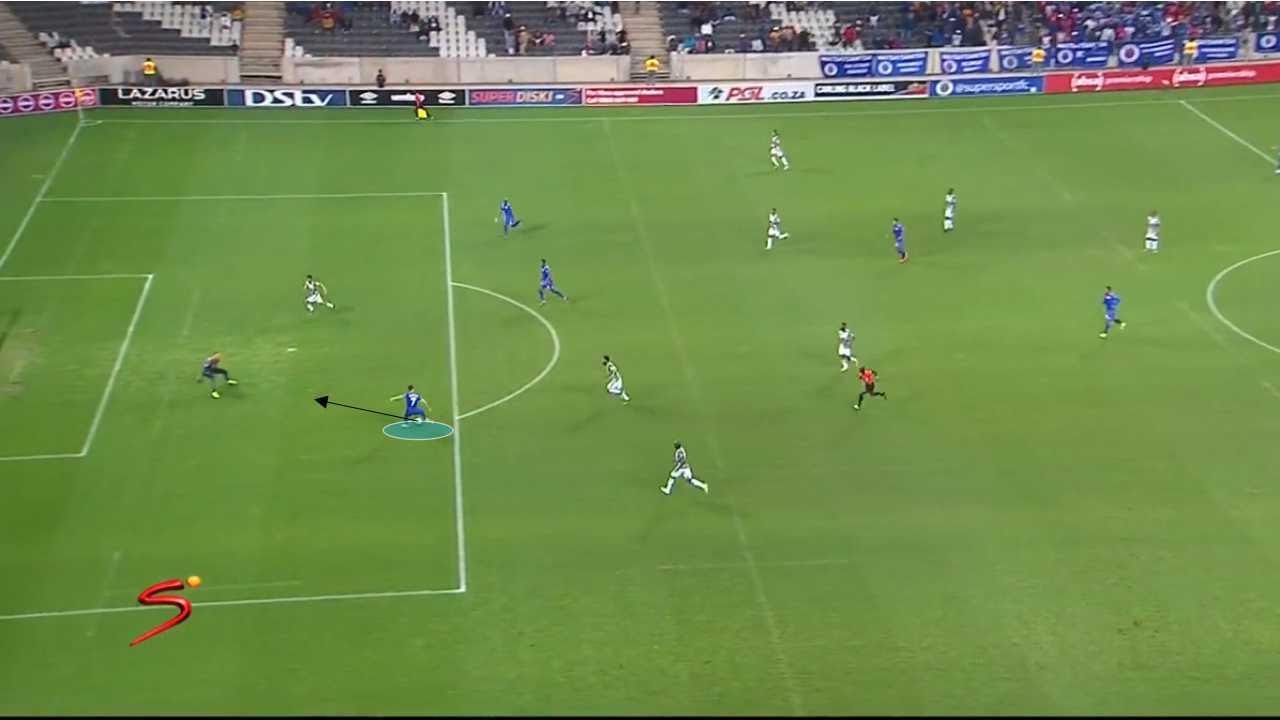 Grobler usually excels in transitional moments where the opposition is not well-organised and often takes advantage of the gaps available through movement and intelligent positioning. This kind of movement from the left-inside channel has brought him many goals for Supersport United over the years.

Quick reactions and predatory instincts are the order of the day. Grobler’s anticipation leads to an interception, as James Monyane tries to head the ball back to his goalkeeper, only for a lurking Grobler to cut the ball out and flick it past Wayne Sandilands. 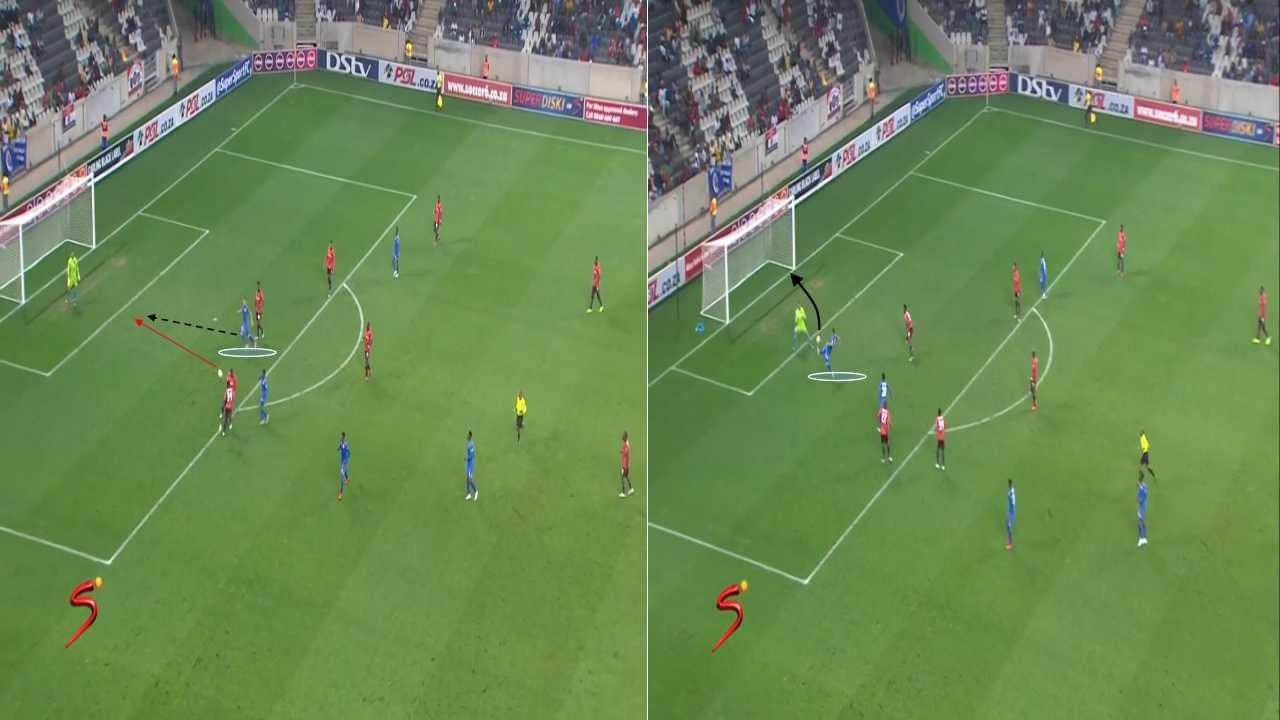 Deadly in and around the 18-yard area, Grobler always makes the opposition pay for their mistakes. In this scenario, he is well-positioned to receive a slide-rule pass from Sipho Mbule, a moment after Itumeleng Khune gracefully gifted the ball to Gamphani Lungu – who started the move. 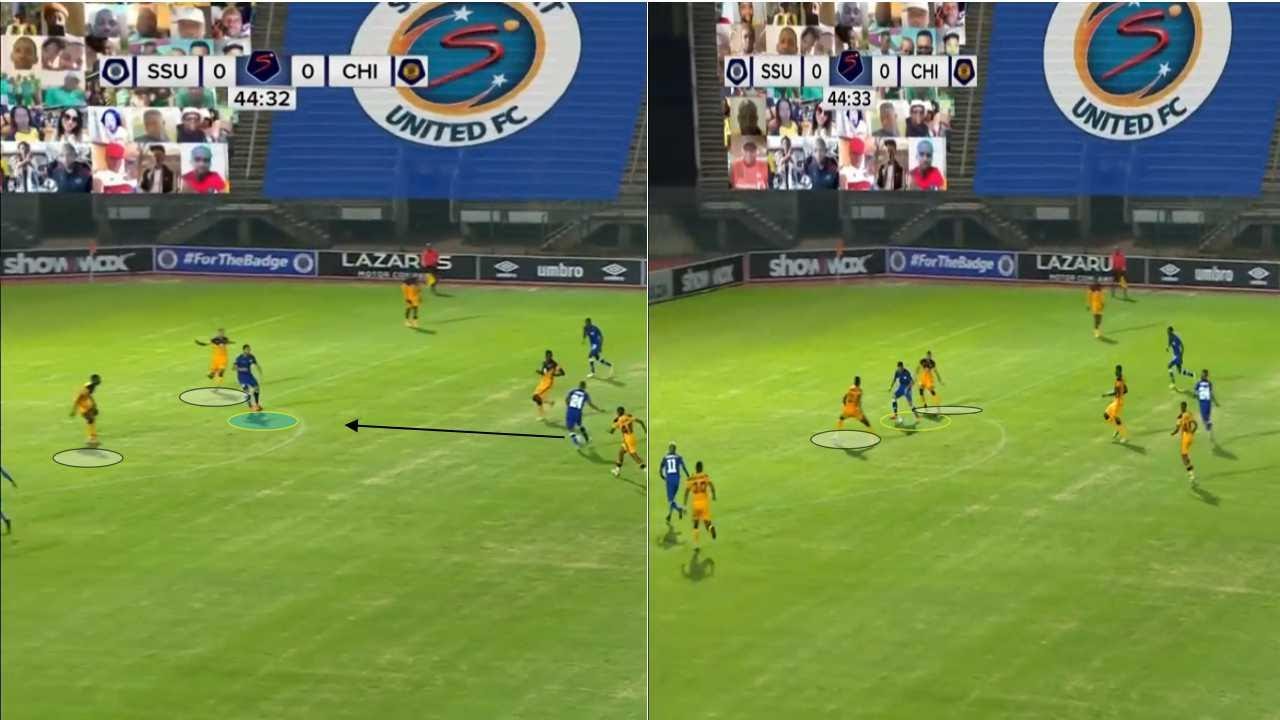 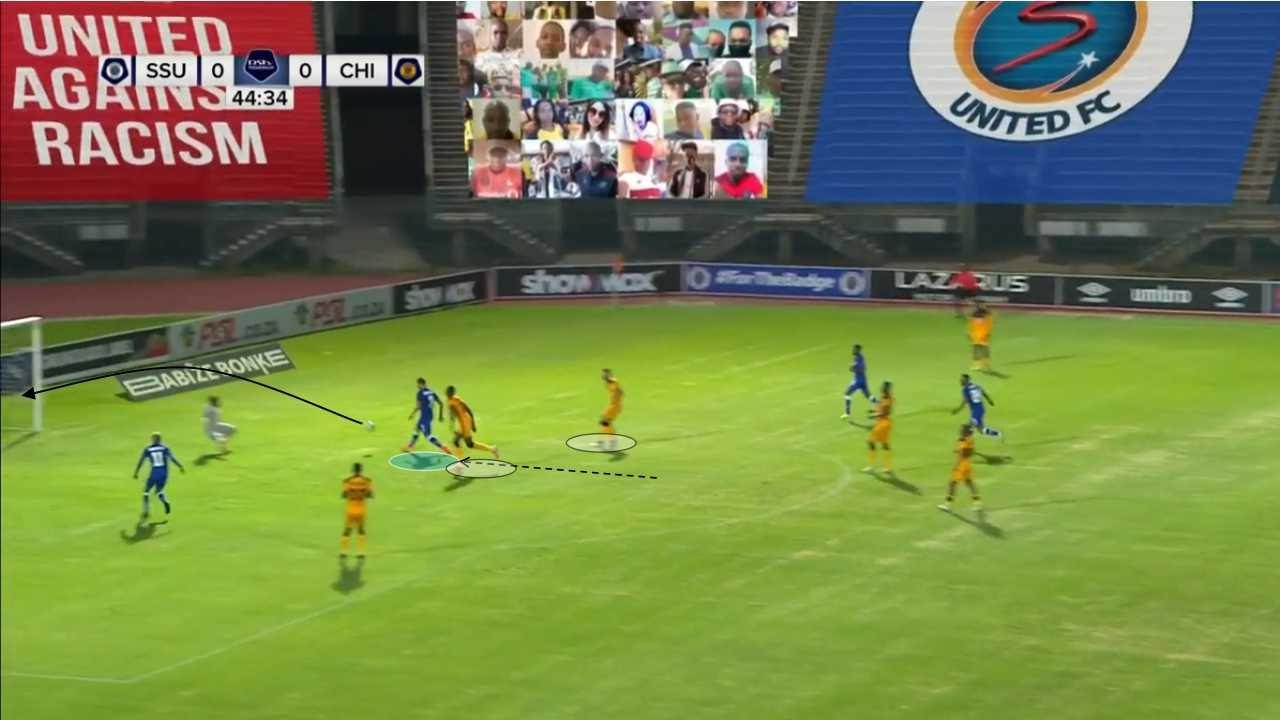 Well-positioned between two centre backs, Grobler receives the ball on the half-turn, before leaving both Daniel Cardoso and Erick Mathoho wondering, to chip the ball over the head of an already-committed Khune and into the back of the net. Grobler enjoys being positioned between two centre backs or between a fullback and a centre back. From those positions, he either makes short marked runs to receive passes behind the defensive line or receive the ball to feet before creating space to shoot.

As Evans Rusike looks to be a danger coming in from the inside right channel against Maritzburg United, the two centre backs Nazeer Allie and Rushine De Reuck whose attention is on him (Rusike). Grobler sees an opportunity to be on the blind side of the two centre backs, in between De Reuck and Pogiso Sanoka (right back). He then makes a timed run behind the defensive line, before going around Sebastian Mwange, to pass the ball into an empty net. 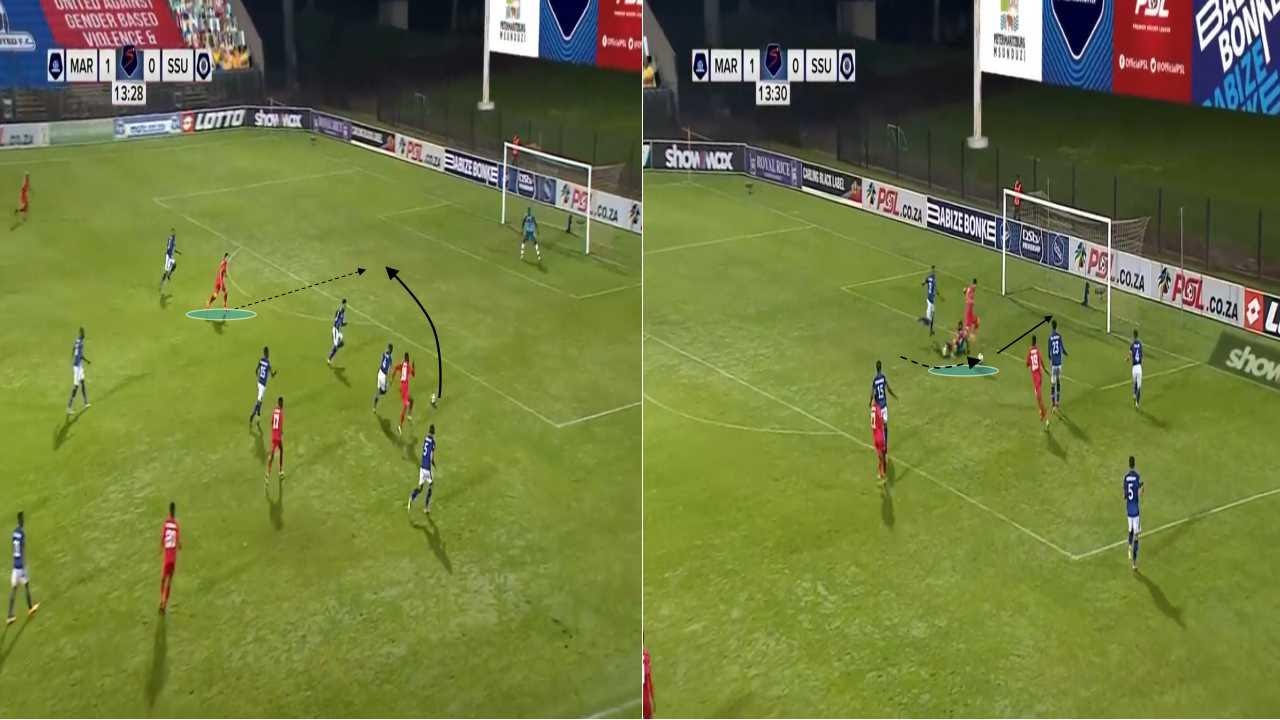 If and when he’s unable to find himself between defenders; he uses sharp changes of direction to offset the defenders and create space for himself. Grobler shows how well he moves to free up space for himself to be positioned between defenders, in a match against Highlands Park last season. He uses smart double movement to free himself from Ryan Rae, whose attention shifted to Audrey Modiba. 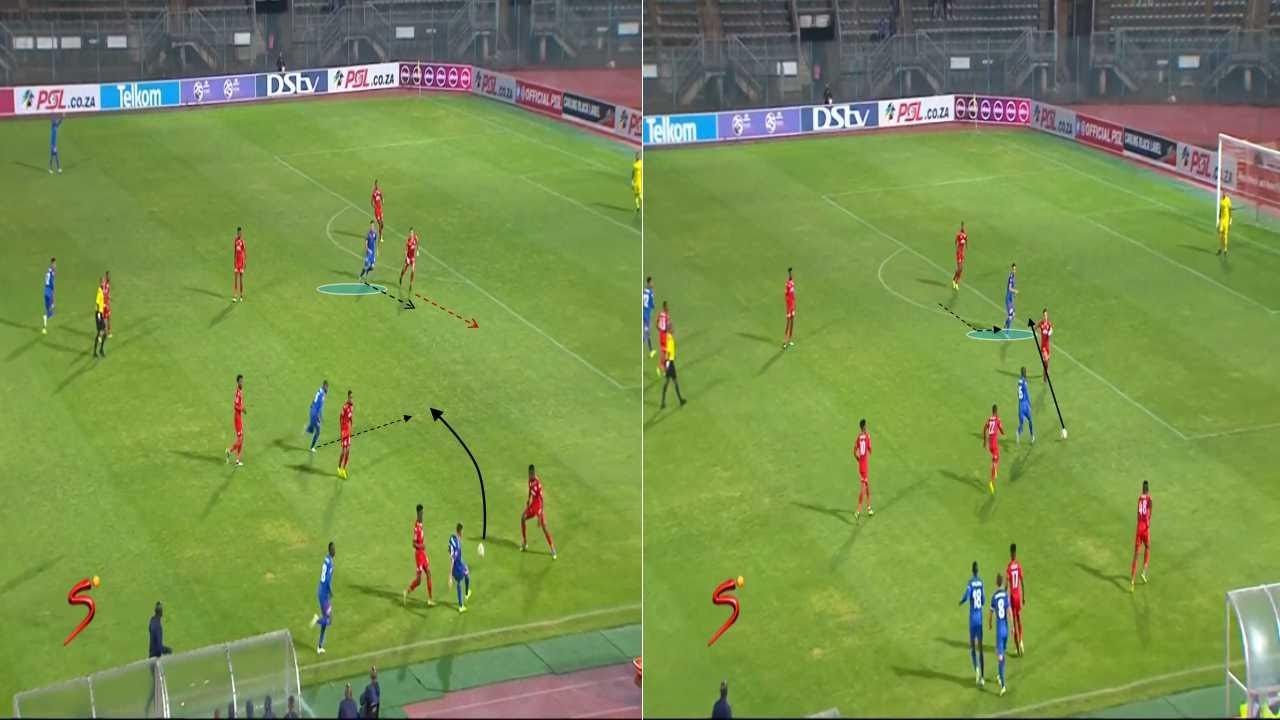 He looks over his shoulder to see Sifiso Mbhele dashing to try to block him from taking the first touch that would put him through on goal. Grobler then twisted him before sticking the ball at the back of the net from the edge of the area. 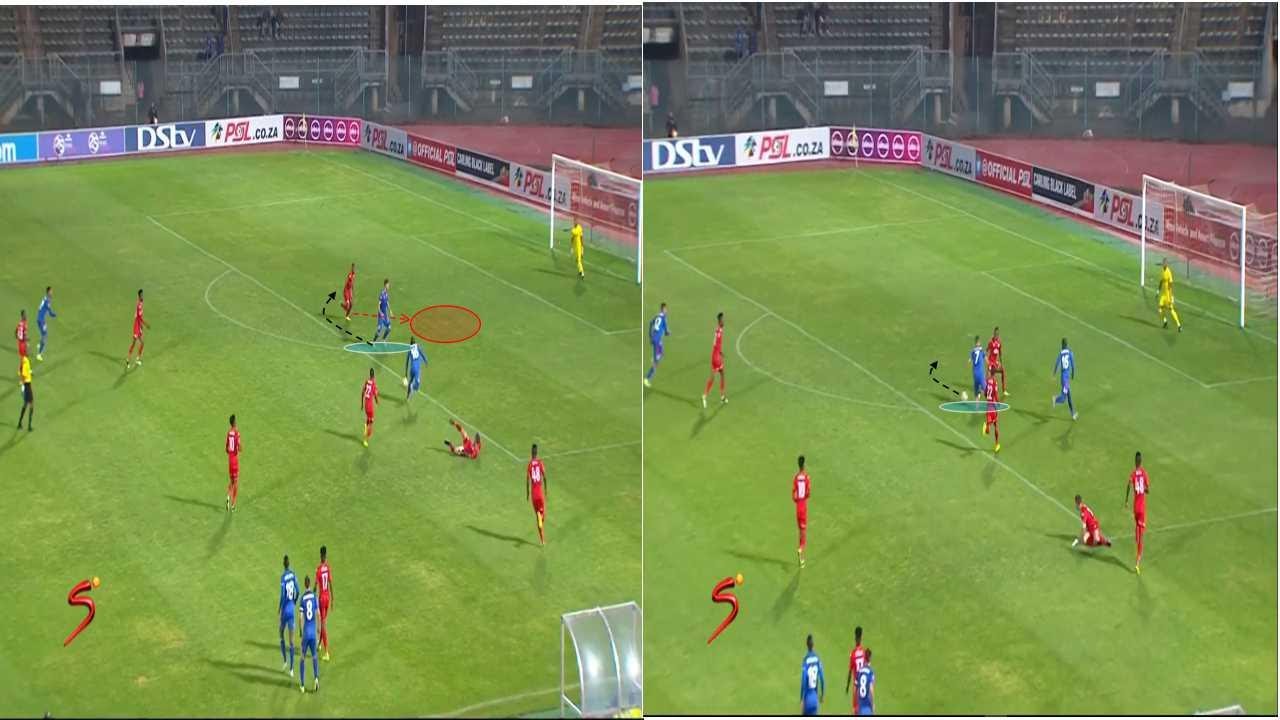 Finding space in and around the box; is his forte. In the image below, we can see him drifting wide to the blindside to free himself from Highlands Park’s entire backline that is focused on the ball. He then receives the ball before cutting in and scoring from just outside the 18-yard area. 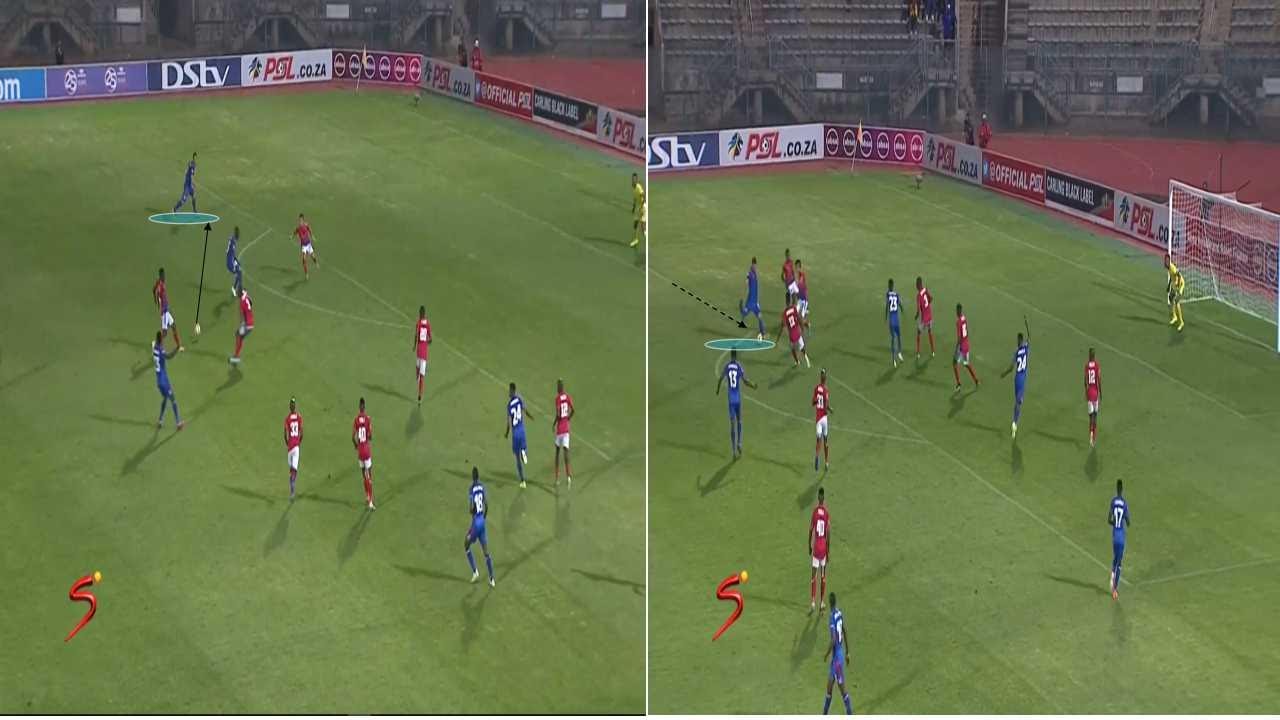 Standing at 1.83m, he is an exceptional target man, winning 45% of his aerial duels, on second to Samir Nurković (46%), amongst players who scored 10+ goals last season. He also tasked with being an outlet for long balls when his team is sitting deep. From a long ball, he can either bring his teammates into play or create chances for himself.

The match against Kaizer Chiefs last season is a perfect example of his aerial strength. The ball is played long from Ronwen Williams before he forced Lorenzo Gordinho to flick the ball to Thamsanqa Gabuza who is running in behind. Gabuza then picks up the ball to put him through on goal. 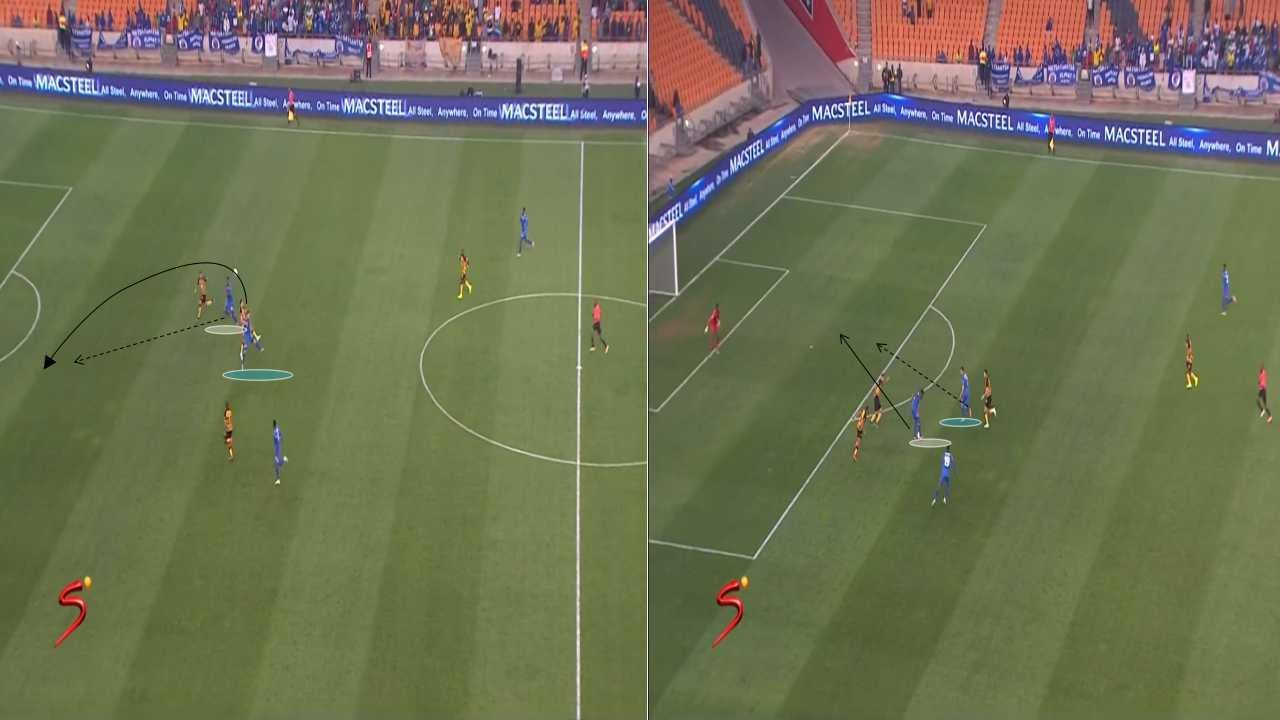 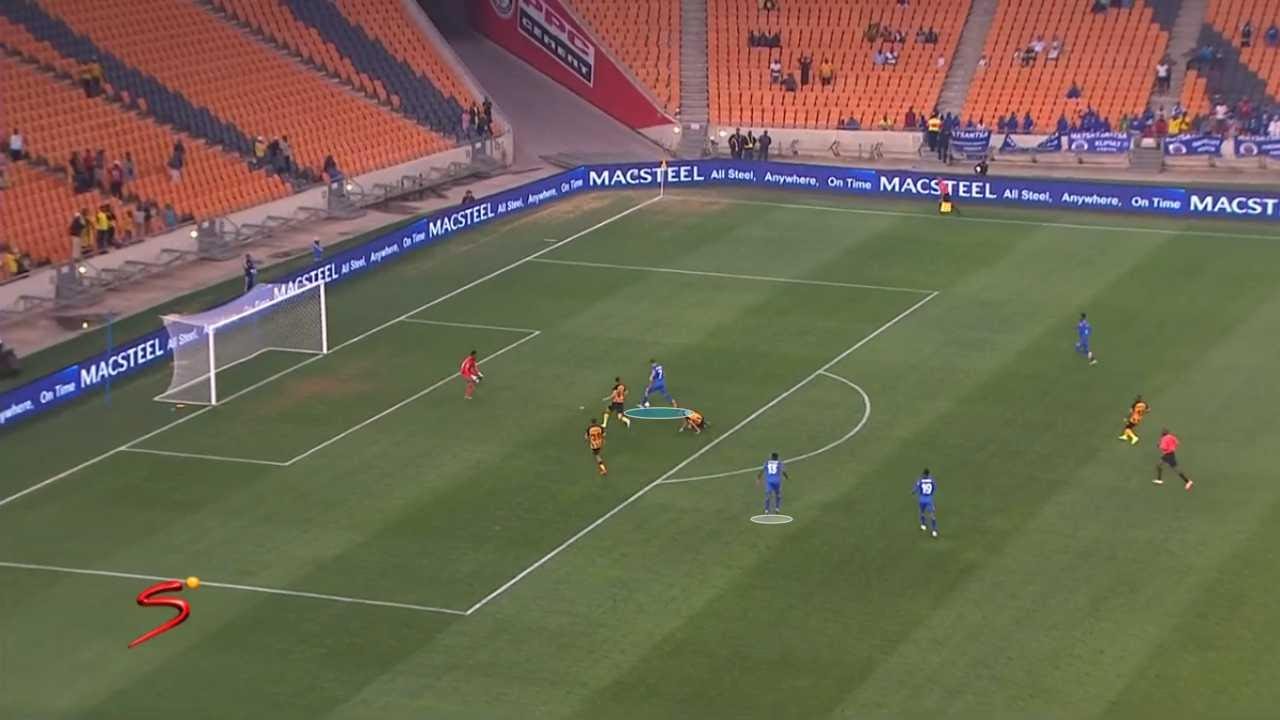 With an xG of 16.38 in the 2019/20 season, the highest amongst every player in the top division, Bradley Grobler is a pure penalty-box prowler. It is still early days in the league this season, and he has already shown his intent to prove that a 32-year old can still do it at the top level.