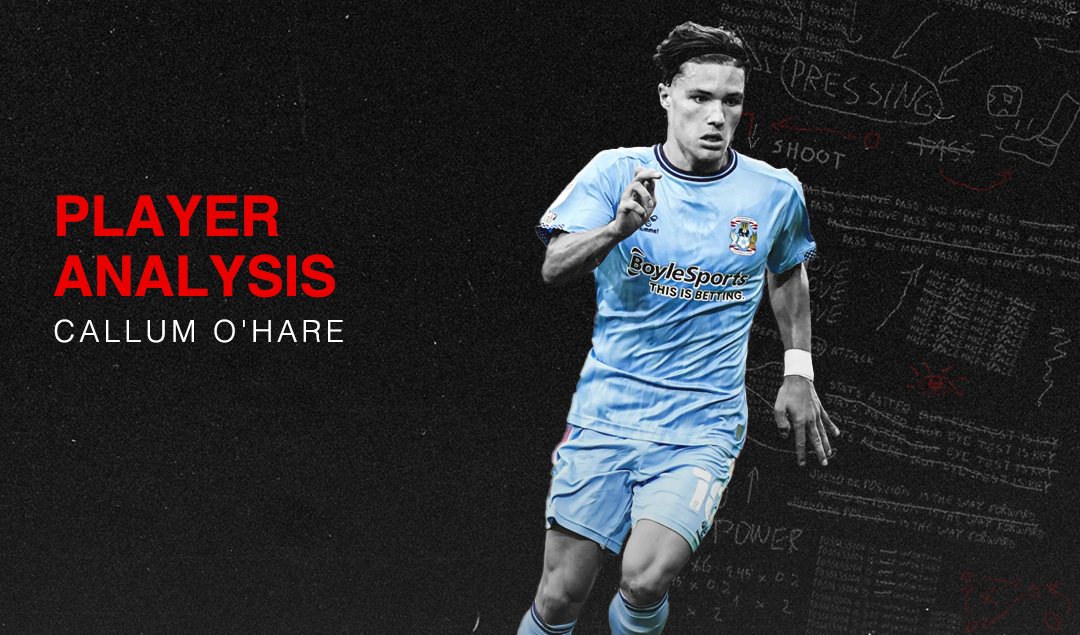 For as long as time – think Maradona vs England in ’86 or Messi exhibit one of 400 – phenomenal solo runs have often been followed by opposing fans’ cries for defenders to scythe them down at the apparent multiple opportunities to do so. After all, those slight, slippery ball carriers in full flight are quite simply the hardest type of footballer to stop, and as a result, defenders will do almost anything to prevent the path of players with such reputation.

Since his arrival in the Championship with Coventry City in 2020, Callum O’Hare has conquered that role. The Midlands-born midfielder is a frightening player to face off against in a favoured two-on-one situation, never mind a one-on-one, and at 23 years old, he continues to mature into a masterful dribbler and a menace all over the pitch, with the technical quality that has seen his reputation skyrocket in recent times. But it hasn’t always been plain sailing.

Having started out at Aston Villa, O’Hare was always known to have star quality and an infectious belief that lifts those around him. In a 2018 interview, Aston Villa’s U23 coach Mark Delaney described O’Hare as ‘one of those boys who is nine years old in his head, he just wants to play football every day, he just wants the ball at his feet, wants to help out with the lads in every game and you see that in his energy around the club.’

It’s safe to say that his passion and his drive remains as vibrant as ever. These are traits that proved crucial in getting his professional playing career back on track whilst still in its infancy when that setback arrived.  After working his way through the ranks at Villa Park, successful loan spells with Carlisle United and Coventry weren’t enough to cement a place in the first team squad of the Premier League outfit, who released him in June 2020.

Alas, as he continued to shine elsewhere when the shadow of Jack Grealish would have inevitably loomed had he stayed put, it soon became clear that the staggered nature of his development through the Football League had worked to perfection.

Where years would have been spent watching on as Grealish, with whom O’Hare is often compared to stylistically, waltzed his way to stardom, the youngster instead learned from the best not only in terms of technical talent, but in attributes such as patience and gradual growth that also helped the now Manchester City man battle his way to the top.

Consequently, O’Hare went away to hone his craft and build his own reputation to where Grealish was at around the same age as he is now: an upper end Championship player at 23. Now that’s not to say O’Hare is destined to make a £100 million move in three years time, but there is no doubt that top flight football is a prospect that looks more and more likely with each passing week.

With the manner in which he has lifted Coventry, first to safety last campaign, and now through this season’s early stages where they are sniffing around the play-offs, who knows? That could well be with the Sky Blues.  The start to this season in particular has seen O’Hare really step up and pit himself amongst the Championship’s most pivotal playmakers in so many aspects.

Safe in the knowledge that he possesses game-changing ability, his lack of fear to front up to opponents menacingly measuring a heavy tackle or a crafty clip of the heels is one thing, but to thrive upon doing so when push comes to shove is what makes him stand out. This has been exemplified by Coventry’s first two home games of this season, where they have twice come from behind to score an injury-time winner.

As these matches progress, when pressure becomes panic all around him in the form of hopeless punts forward and rash final-third decisions, O’Hare became increasingly magnetised to the ball, combining manic speed with meticulous thought to single-handedly manufacture his team back into both games and over the finish line with time against them.

In such scenarios, defenders will target him in twos or threes, each picking a side only for O’Hare to skip through the middle with ease. Alternatively, if one lunges across to prevent that from happening, they should expect to be nutmegged for their troubles. A single step into the minds of said defenders causes second-hand frustration, he’s just one of those little magicians – irritating and irrepressible in equal measure.

As such a skilled dribbler, O’Hare also has the presence of mind to spend the seconds breezing past players scouring the pitch for the next pass, and he more often than not has the ability to thread through the lines or into short spaces in behind the defence with a wonderful weight of pass.

When it comes to these crowded areas of the final third, it is common to see a stutter in a player’s step, a skip in the mind that signifies momentary indecision and usually leads to a breakdown in play. For O’Hare, however, he looks so fluid in his movement and confident even with multiple defenders closing in. A trait that unnerves opposing players and brings his teammates to life as they anticipate a release at the right time.

Unfortunately, as is typically the case with such enthusiasm to create and self-assurance to do so, Coventry’s catalyst does have a tendency to overrun the ball or fail to anticipate that he has drawn in one too many defenders for his liking. But as previously mentioned, his in-game intelligence is continuously improving.

Playing in the number ten slot of Mark Robins’ 3-5-2 system, the heart of everything, if you will, O’Hare’s incessant need to be here, there and everywhere does comes at the detriment of his end product from time to time. The midfielder just loves having the ball, and when he’s dropping deep or drifting wide to pick it up, it is more difficult to create clear-cut opportunities.

With that being said, O’Hare has completed 2.8 key passes per 90 so far this season as opposed to 1.3p90 in 2020/21; this is testament to the delicacy he displays on the ball in tight spaces and his awareness to find teammates in the final third, which in turn, has caused a stark contrast when it comes to shooting.

So far this campaign, he has scored none of his 17 shots in the league, hitting the target with just three. A clear flaw for a man that finds himself in good shooting positions at least three times per match but rarely seems to produce when going directly for goal.

Nevertheless, though this appears to be an alarming weakness on paper, just watching the former Villa man for ninety minutes pinpoints the phenomenal impact he has in every fixture, having undoubtedly being influenced by the combination of showmanship and susceptibility to single-handedly take a game by the scruff of the neck that Jack Grealish possesses.

The slicked-back hairstyle, the low-set socks, the battle-hardened ability to rebound from foul after foul ready for more, the Grealish-O’Hare parallels are aplenty, and in the way that Coventry’s creativity revolves around one man in the way that Villa’s so often did, it’s easy to believe that their career paths won’t stray too far apart either.

He might skyrocket the Sky Blues into the promised land, he might not. But either way, expect to see Callum O’Hare playing Premier League football very soon.