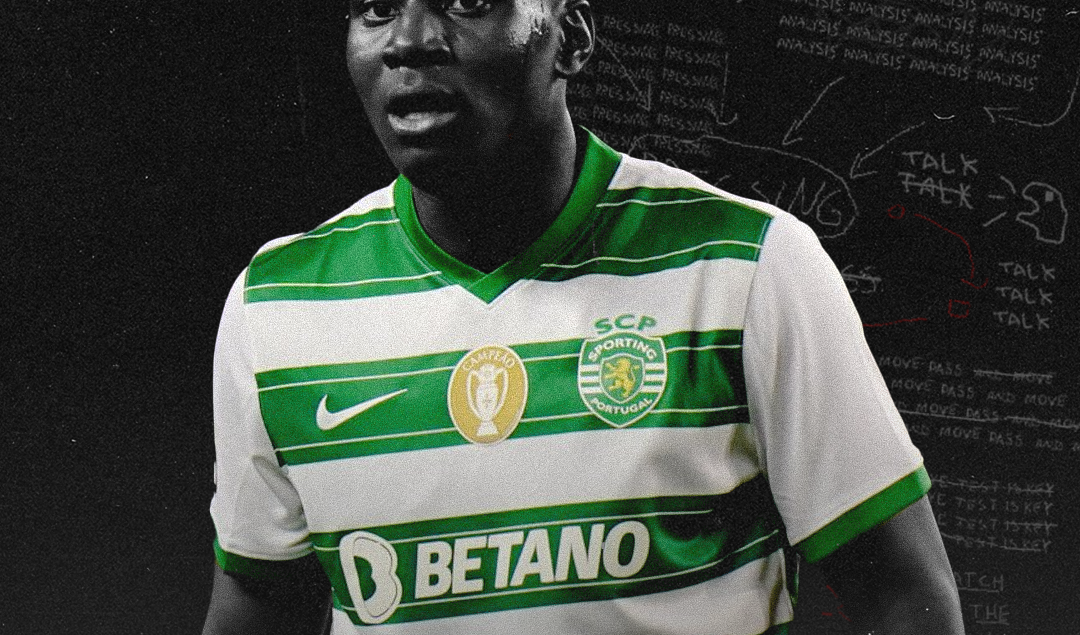 For the first time in 19 years, Sporting Clube de Portugal, otherwise referred to simply as Sporting, finally managed to win the Primeira Liga in 2020/21 after a two-decade stint of watching Benfica and Porto from the shadows trade places as the best team in Portugal’s top division. Their struggles were in large part due to financial mismanagement, as the club had amassed debts exceeding €250 million by 2011. This culminated in poor results on the pitch, a constant change at the helm, and most disappointingly, a lack of investment into their historic academy that most notably birthed Luis Figo and the one and only, Cristiano Ronaldo.

Recently however, the club’s fortunes seem to have changed for the better, as they managed to attract one of world football’s most sought-after managers, Ruben Amorim, from rivals Braga in early 2020 and prior to that oversaw the sale of Portugal’s most prized asset currently in Rafael Leao, who is said to be valued at around €85 million according to Transfermarkt.com. With the signs looking promising, there could soon be even more reason to smile for the Sportinguista ultras as they patiently await the full assimilation of 17-year-old Dario Essugo into the first-team squad as he edges ever closer to his imminent promotion.

Born in 2005, Essugo joined Alcochete, the famous Sporting CP youth academy in 2014 at the age of 9 from local club UDR Santa Maria where he only spent a year. He has promptly ascended through the ranks into a highly promising talent. The teenager has also been a constant fixture in the Portuguese youth teams, adding 31 internationals between the under-15s and the under-20s.

His performance at the Euro U-17 Championship in 2022 was one of Portugal’s highlights in the tournament, playing a part in all of the matches as they reached the semi-final before being eliminated by the eventual winners, France in a penalty shootout. Although they lost, Dario scored a sublime long range effort in said game:

His professional debut for his boyhood club came on the 20th of March 2021 in a league fixture against Vitória de Guimarães – at 16 years and 6 days, becoming the youngest-ever debutant in the club’s history. Realizing the magnitude of his achievement, Dario broke down in tears after the final whistle and was warmly applauded by the fans.

“It is an indescribable sensation, in which I always breathed in and always dreamed. I have to thank everyone. It is only the beginning, to continue working and helping the club to achieve its goals. It is different to be playing at a senior level. They supported me and I was even more relaxed,” said the starlet in an interview after the game.

On 7 December 2021, Essugo also became Portugal’s youngest player to participate in the UEFA Champions League, when he took to the field in the second half of a 4–2 away loss to Ajax in the group stage. He broke yet another club record in March, when he surpassed Figo as the youngest starter at 16 years, 11 months and 17 days in a 2–0 home victory over Arouca. He has since made just over a handful of appearances as he is being eased into professional football.

All this just goes to show how much he’s admired by the club from the capital. His first start in the league for Amorim’s men finally came on December 29 in a 3-0 win against Pacos de Ferreira but received a red card in the 82nd minute after a rash challenge, exposing his lack of experience at this level. Despite the sending-off, Dario put in a solid performance, managing to complete 88% of his passes (37/42) and winning 5 tackles. 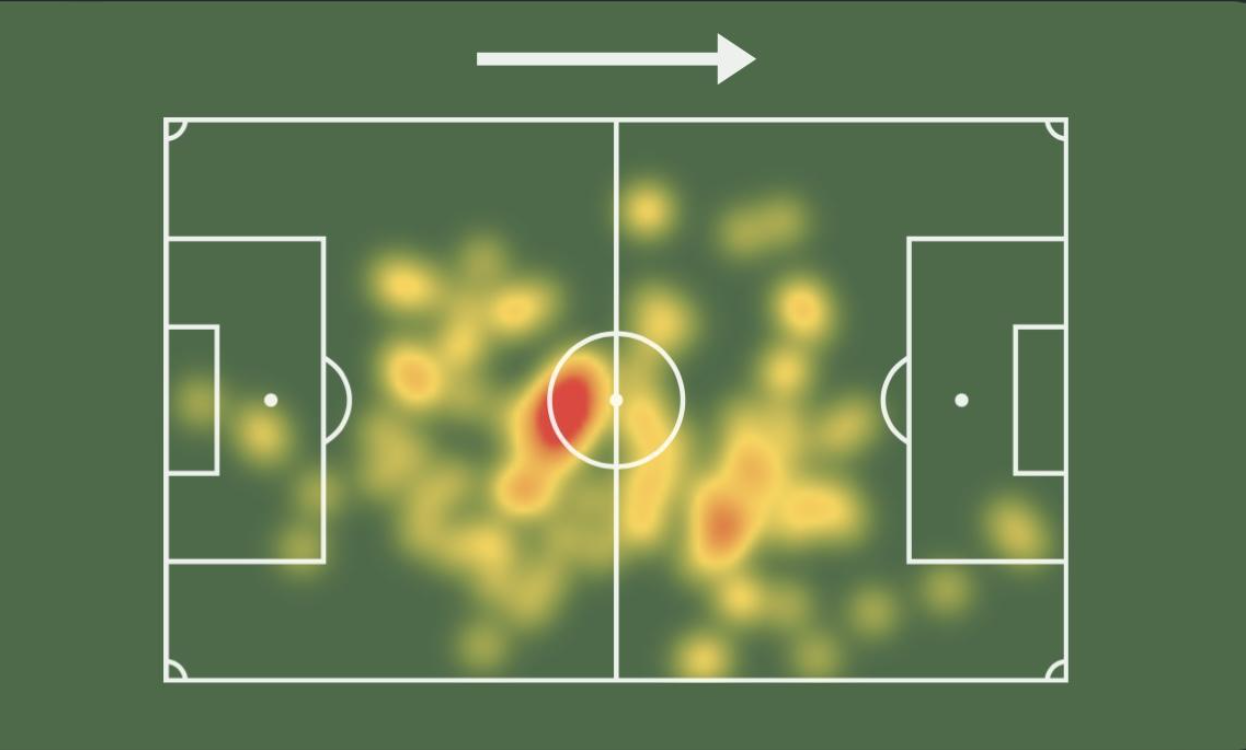 Heat map so far for the first team in the league by Sofascore (2 appearances, 136 minutes)

He is generally a very robust midfielder who has a lot of attributes to take him to the very top of the game in his position. His profile falls under the defensive playmaker role, which specializes in being defensively secure and sound in his distribution of the ball.

What stands out most when watching Dario are his physical qualities – as he is very well balanced, has good pace and the flair to power past opponents with the ball. At 5 ’10/1.79M, he’s not the tallest but yet still is very strong and can hold his own when in possession; with excellent body mass ratio and natural fitness, Essugo relishes contact situations when being pressured.

What’s been particularly impressive in the last year and a half has been his partnership in the middle of the park with Mateus Fernandes for the club’s B team in Liga 3. Despite being amongst the youngest players in the league, the duo has excelled beyond expectation and almost looks like big fish in a small pond with their confidence to control the tempo of games on both sides of the pitch.

Dario has personally improved his defensive positioning, with his strength and tackling being among his best attributes, each week looking more like a complete midfielder who can link up play more efficiently along with his sharpened ability on the ball.

To add to those characteristics, he is also very good at anticipating the opposition’s intention to either dribble or pass into potentially dangerous areas, averaging about 1 interception per 90. The aggressive nature of his game is commendable as it exemplifies a proactive approach that often intimidates attackers, a hugely important quality for any top defensive midfielder, especially when going into tackles and aerial duels.

He doesn’t shy away from getting stuck in although sometimes a bit too eager to step in to make a challenge has left him in unfavorable situations – in his 6 games across all competitions for the first team he has 3 yellow cards and the red. With a bit more experience he will no doubt improve his timing and decision-making in this regard. He’s a near-perfect player for a high-intensity and pressing team and is comfortable in different tactical setups as an anchor in the middle.

While he is mainly known for his ability to provide stability by supporting his more offensive-minded teammates defensively, and simply distributing the ball to them accurately after winning back possession, Essugo has an equally formidable skill set going forward as he can influence his team’s attacks from the first phase. He has the confidence to pick the right pass with his impressive range and possesses a proclivity for breaking the lines with intricate vertical balls which goes hand in hand with his superb vision.

Moreover, the youngster has a tendency to brilliantly switch play (mostly from left to right) when the opportunity presents itself, in turn redirecting his team’s point of attack which upsets the opposition’s defensive shape. Dario also illustrates his bravery by being able to assuredly foray into midfield with the ball when afforded the space and time to do so, before setting up his teammates.

A couple of areas that could use some refinement are his concentration and decision-making in choosing the right moments to venture forward, play a certain pass or step into challenges but other than that Dario is well ahead of most players his age in terms of maturity and general football IQ.

He has also displayed good leadership skills and could possibly be a captain in the future, having already done so at the youth level both for club and country with his determined and committed attitude towards contributing to the team’s success before his own. Sporting recently renewed his contract until 2025 with a staggering €45 million release clause included. With a bright future ahead, Essugo is well set to have a breakout year in 2023 and hopefully establish himself as a regular in Amorim’s team at such a young age.