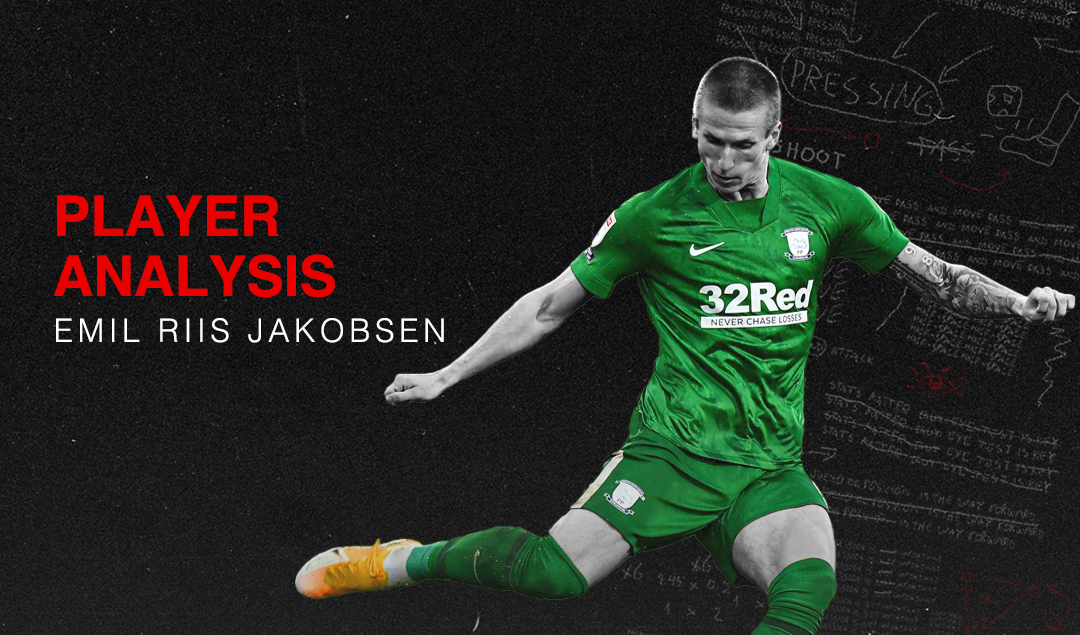 On 1 October 2020, Emil Riis Jakobsen signed a four-year deal with EFL Championship side Preston North End. Having joined Danish Superliga side Randers at the age of 14, a club literally on the doorstep from his hometown Hobro, Riis showed off his ability within the space of two years, becoming the top scorer of Randers’ youth team by scoring 24 goals in the youth league.

It was this that allowed Riis to be spotted by various scouts across the globe before moving to Derby County, an academy renowned for producing high-end Championship to Premier League stars, such as Max Lowe and Jayden Bogle at Sheffield United and to hold on to young talents such as Jason Knight and Louie Sibley.

Riis progressed throughout Derby’s youth system to the U-23s, scoring 11 goals for the youth team when he reached the side. Unfortunately for Riis, this was not enough for him to be offered a professional contract with the club, a decision that I believe they will be made to regret in the future.

The Return of Riis

Riis returned to his previous club Randers after his release from Derby and a failed trial with VVV-Venlo on 13 June 2018, this time with a professional contract with Riis signing a three-year deal with the Danish side. Riis often played alongside another striker in a 4-4-2 double 6 formation.

FIGURE 1: Randers showing the 4-4-2 double 6 in action in this defensive play, the two holding midfielders (6s) push upfield to press the ball with the wide midfielders dropping back just in front of the backline, thus creating a 4-2-2-2 formation. If the ball gets played through the 6s then the two centre-backs can step-up forcing the fullbacks to cover the middle of the pitch left by the centre-backs and therefore, the wide midfielders cover the fullbacks’ position.

As seen above, Riis is isolated up front at this time. However, there is a second striker nearby so he will be able to link the play together. Due to this formation, it forces the strikers to generate chances for themselves due to the defensive strategies. And it is this alone that Riis had adapted his game around, one that makes him quite dangerous than in the Championship.

The quick ability to change direction, with the strength to be able to hold off defenders and then use his pace to get the upper hand for himself and his team. The clinical approach to his game came in the 2019/20 season in which Riis scored 14 goals and provided six assists in 39 games all competitions. To put it into numbers, that’s 0.51 Goals or assists per game within the season or one goal or assist every 131 minutes – a decent statistic for a player who was only 21 years of age. This proved that Riis was ready for a step-up.

FIGURE 2: A sensational goal from Riis, using his body to shield the aerial ball away from the defender, before caressing the ball down and in one swift motion strike the ball into the top-left corner of the goal, making it virtually impossible for the goalkeeper.

Preston North End, a team renowned for signing players domestically shocked the Championship by signing Riis. A player unknown to many people within the Championship, besides Derby fans. Riis was brought into Preston as a breath of fresh air, a player who could bring a new dynamic to the final third for then manager Alex Neil. Neil had transformed Preston the previous season into genuine promotion contenders before falling at the final hurdle.

The Scot had engraved his style of play, a 4-2-3-1 with the wingers and number 9 rotating throughout the attack, to generate the best counter-attack opportunity and scoring possibility. Riis under Neil was used as a lone number 9, different to the second striker he had been used to previously at Randers. But during his first few games in the famous Preston North End shirt, you could see the quality.

In his first competitive start for Preston, Riis managed to assist Scott Sinclair by winning a penalty through terrorizing the backline the entire night, finally getting a QPR defender to lunge in and give away a penalty.

FIGURE 3: Riis, from a ball over-the-top from Declan Rudd, manages to get around the QPR defender after being three yards behind him to then shape his body around the ball to shield it from the left sided centre-back (highlighted) who lunges in for the ball in the area for which Riis gets a penalty given for his hard-work. Riis was adamant to get to these 50-50 long balls. A work-horse mentality for such a young player.

FIGURE 4: Riis, as been taught at Randers to generate his own opportunities if needed, drags defenders inside to try and give Sean Maguire a chance to make space for a chance. Instead, Riis dummies a shot to move the ball onto his left; taking both Huddersfield players out of the play itself in one-move before unleashing a cannon of a strike which unfortunately strikes the underside of the bar and bounces away.

Riis then struggled for game-time through the rest of Neil’s reign at Preston, making regular appearances off the bench in the latter end of games. Hardly enough time to make a real impact, especially if Preston were leading. This was due to Riis playing as a lone striker and did find it difficult to be able to link play; especially if he was faced against an entire backline on his own.

He especially struggled with the route-one football that came to Preston around January. It almost became impossible for Riis to stamp his authority on games, with no support and balls being played in the air towards him with his back to goal against physical defenders.

Due to the mutual termination of Neil’s contract with Preston on 21 March 2021, then assistant manager Frankie McAvoy took the role of interim manager until the end of the 2020/21 season.  In the two games that have been played so far under McAvoy, Riis has started both. And both starts have been with another striker for support, Ched Evans.

McAvoy had changed the dynamic of how Preston plays with the 4-2-3-1 out of the window. Against Norwich it was a 4-4-2 with a diamond within the midfield, but the most recent game in the away win against Swansea is the most impressive from McAvoy.  He set Preston up in a 3-4-1-2 formation with flying wingbacks in Sepp van den Berg and Tom Barkhuizen, giving the attackers much more support in the final third. The formation transitions through various attacking areas even going into a 3-1-3-3 formation to flood the final third.

FIGURE 5: Here in a 3-1-3-3, Preston press the ball to force a clearance to be made by Swansea in which it falls to Ledson. The movement that Potts then makes is clinical into opening space for Riis to be able to potentially have a ball thread through to him. Potts moves back from a wide position into the 10 role which causes a 3-on-4 situation for Riis to run in between the left centre back and the left back causing confusion.

FIGURE 6: Riis, on the last defender’s shoulder and in-between the left centre-back and left back’s half-space. And on the blind-side of the final man, yet again causing confusion for which if the correct weight of pass were made by Evans then Riis would be 1-on-1 with the goalkeeper.

From the games under McAvoy, Riis has just been trying to find his feet again. But the positives are there and for those who watch Preston, then you can see the comfortability that Riis has in a two-forward set-up, so he can play off the other striker. A player down on confidence is slowly returning to the player that caught the eye when he first signed for Preston. And one that is only going to improve.

With the managerial insecurity for next season at Preston. Whether it turns out to be McAvoy full-time or that the club goes down a different direction, one thing is for sure and that Riis needs regular game-time and support from other players in the final third to flourish. Give him that and I have no doubts about Riis flourishing in the Championship next season.