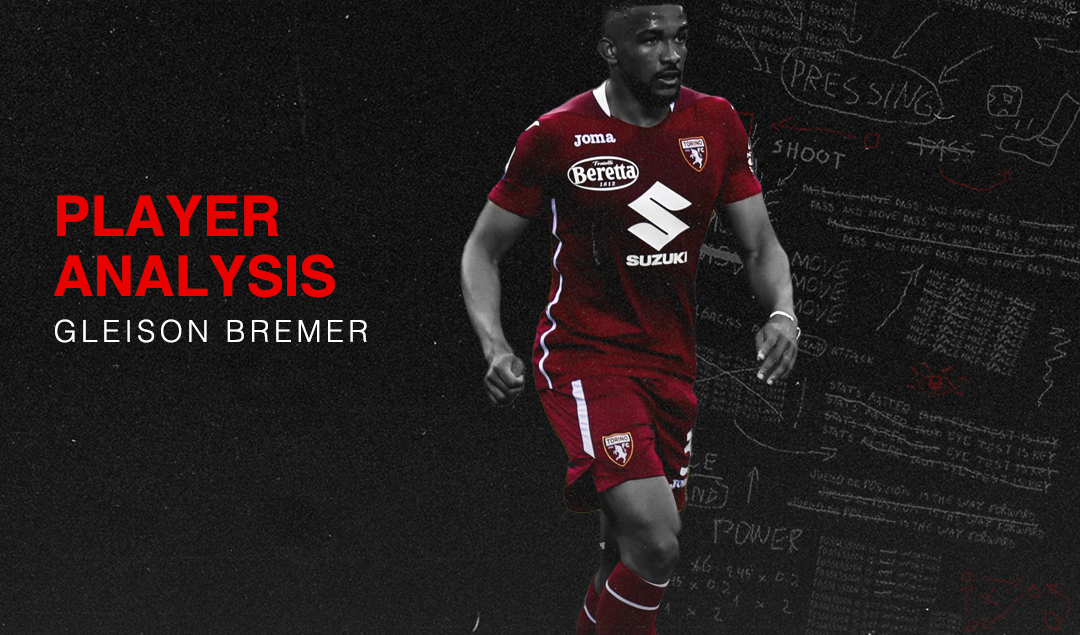 Torino has been living in the shadow of city rivals Juventus for many years and the last decade has been no different. While Il Toro were the dominant side in Serie A in the 1940s with their “Il Grande Torino” squad, the Bianconeri won nine consecutive Italian league titles from 2012 until 2020.

During that time, Torino returned from Serie B and has qualified twice for the Europa League, otherwise the club has struggled to survive relegation. The last two seasons in particular have been a struggle but there have been some shining lights including one of its rocks in defense.

Gleison Bremer was purchased from Brazilian club Atlético Mineiro in the summer of 2018 for €5.8 million and he has demonstrated that he is a solid and clean center-back. His performances have also earned him admirers outside of Italy and some the biggest clubs in the English Premier League have been linked with him.

The 24-year-old had got off to a slow start when he arrived in Italy, but he eventually worked his way into the Torino starting line-up, and the multiple tacticians that have coached him so far have depended on him.  Bremer found playing time to be very limited throughout the 2018/19 season. Coach Walter Mazzarri had his preferred defensive trio of Armando Izzo, Nicolas N’Koulou, and Emiliano Moretti, and the Brazilian youngster only made five appearances in Serie A during that campaign.

He made his first start in Week 35 of that season and the assignment could not have been any harder. The Granata faced Juventus in the Derby della Mole and the young defender had to face Portuguese superstar Cristiano Ronaldo. Saša Lukić had given Il Toro an early lead but a Ronaldo header six minutes from time prevented Mazzarri’s team from earning a shock victory. Leonardo Spinazzola provided a cross from the left-wing and the Juventus forward jumped higher than Bremer to level the scores.

Despite that moment, the Torino coach was impressed with the Brazilian’s performance and gave him some encouragement. “I gave him a round of applause from all over the locker room,” Mazzarri said in his post-match press conference. “For ten months he has been training with great seriousness and in fact he made his debut against Juve tonight. In a very difficult stadium, he looked like a veteran. It would have been perfect if in the last situation Ronaldo had been marked a little more closely, but we were punished by a phenomenon.”

After the retirement of Moretti, Bremer was brought into the Granata starting line-up, but the 2019/20 campaign was one of struggle for Torino. It was eliminated by Wolverhampton Wanderers in the qualifying rounds of the UEFA Europa League and it was struggling in the bottom half of the table.

Mazzarri was sacked in February 2020 after guiding Il Toro to a 7-0 defeat at home to Atalanta and then a 4-0 loss to fellow strugglers Lecce, and he was replaced by Moreno Longo. Longo ensured the club’s safety and it finished 16th on the Serie A table at the end of the 2019/20 season.

It was a season to forget for Torino but Bremer proved to be a competent defender. He played 27 times in Serie A, scored three goals, provided one assist, and had a successful passing rate of 80.3 percent. On average, he made 2.3 tackles, 2.7 interceptions, 4.1 clearances, and 0.8 blocks per game, and won 2.8 aerial duels as well as played the offside trap successfully 0.5 times per game. Discipline was a slight issue with two red cards but he earned just another two yellows and he also committed 33 fouls.

Longo was not retained for the 2020/21 season and Torino hired former Sampdoria and AC Milan tactician Marco Giampaolo. The Giampaolo experiment was not a successful one whatsoever as the club had been in the relegation spots during his tenure and he was replaced by Davide Nicola in January.

When Nicola replaced Giampaolo, he reverted back to the back three formations used by Mazzarri and Longo, and he was able to utilize the strengths of the defender. The Brazilian could focus on defending first and then go forward for corners when possible.

What Torino Fans Can Expect from Marco Giampaolo

Torino was able to survive relegation again, earning 37 points and finishing equal 16th with Cagliari. Bremer played 33 games in Serie A, scored five goals, and had a passing completion rate of 82.7 percent. On average, he made 1.5 tackles, 2.1 interceptions, 4.1 clearances, and 0.6 blocks per game. He also won 0.4 offsides per game and 2.9 aerial duels on average. His disciplinary record improved, earning just two yellow cards and committing 30 fouls.

Bremer spoke to Brazilian newspaper Lance! In December 2020 and credited Torino with improving him as a footballer in spite of the ongoing COVID-19 pandemic.

“I have more and more confidence in myself. The year was not good if we look at the pandemic. Despite the problems, I managed to grow individually. I learned a lot, both on and off the pitch. My daughter was born, and I had good continuity of employment. I can grow even more and I am confident that here in Turin I will do great things.”

For all of Torino’s struggles, Bremer has been a shining light for them in the last two seasons, but his time at the club might be coming to an end. With the likes of Liverpool, Manchester United, West Ham United, and Everton reportedly interested in the 24-year-old, Granata president Urbano Cairo might have some difficulty holding onto him.

That being said, Bremer is contracted to Torino until June 2023 and Cairo would want to make a substantial profit if he sells one of his most important players.