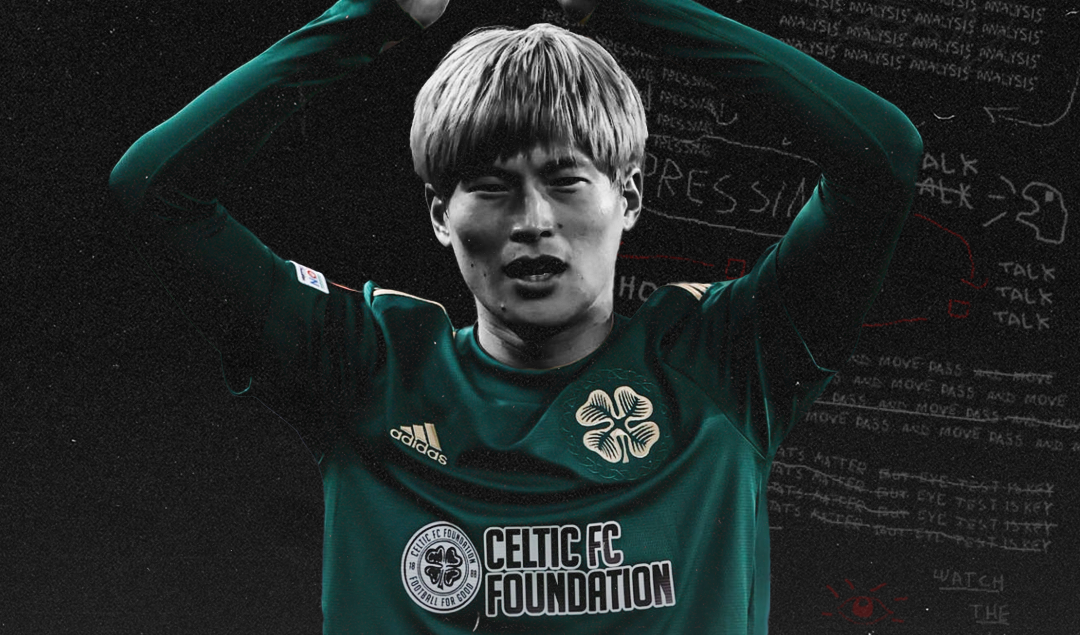 When Kyogo Furuhashi joined Celtic from Vissel Kobe as Ange Postecoglou’s real statement signing having admired the player from his position in the dugout at Yokohama F Marinos, many in Scotland had no idea what they were in for. Soon enough, you had all of Celtic Twitter tuning into a 10 am game in Japan to watch Kyogo’s farewell appearance, after they had aimlessly scrolled YouTube highlight reels in the days prior.

It felt like a signing that embodied successful seasons gone by for the club who would look to pick up talent from obscure markets and move them on for-profit but in Kyogo they have a player heading into his peak years, playing his peak football right in the heart of Glasgow.

His time at Vissel Kobe ended with 15 goals in 21 games with the J League season still ongoing when he joined Celtic in the summer, in fact, he was still the division’s top scorer for months after his arrival in Glasgow. “He absolutely has the talent to play in Europe. He’s got a strong technique and I believe he can succeed,” Andres Iniesta said of his former teammate’s qualities.

If Iniesta is telling you someone is a good player, you should listen. But no one could have been prepared for this level of start from Kyogo as his phenomenal exploits thus far are already attracting wider viewing interest.

His first goal for Celtic highlighted all of the qualities that supporters have come to adore about the Japanese international, losing his marker on the shoulder of the defender, taking an exquisite first touch to race through on goal and calmly lofted over the keeper – instinctive to say the least.

Kyogo well and truly announcing himself at Celtic.

For this to be his debut away from home in a vital UEFA Europa League qualifier and to perform like that speaks to his ability to settle quickly in a completely new environment, thousands of miles away from his home with limited ability to speak the language.

That movement has been what many look to when they argue he is a cut above the rest in Scotland, his ability to constantly be on the move, disrupting disciplined defensive lines and once finding that half-yard dispatches with ease. A first league start of course brought his first hat-trick for the club and already supporters were latched on to their new superstar.

Celtic have been fortunate to have a string of forwards that showed quality beyond the level they were playing at with Moussa Dembele and Odsonne Edouard but Kyogo comes in a unique form at just 5ft 7 and instinctive in his play he offers something different that really sets the tone for Ange Postecoglou’s fluid, aggressive style of play.

You only have to watch the scenes at full time after games to see how much he is already appreciated by his teammates, always playing with a smile on his face and that infectious character, alongside his quality on the field is exactly what can make you an instant Celtic hero.

His relationship on the field with Liel Abada in the early stages of the campaign was paramount to a side that, although successful going forward, were leaky at the back and with a raft of squad changes needed partnerships to form early doors.

Their mutual understanding of movement, as showcased in the recent Abada goal against Ferencvaros in the Europa League, allows Kyogo to pick up the ball deep and feed Abada in or vice versa. But the relationship that has really stood out is with Jota.

As mentioned in a previous piece, Jota has had a similarly phenomenal start to his Celtic career but in Kyogo as a partner, he has found the perfect complement to his talents. Both were at their fluid best against Dundee in the 2-4 away victory with both scoring twice.

Kyogo really set the tone on the afternoon with his aggressive pressure forcing multiple high turnovers in dangerous positions, his movement of the centre half allowing for him to drag Dundee players out of position to open space for Jota to move into. And his finishing power improves game upon game.

Early signs showed that Kyogo probably needed a couple of chances to score, but because he created so many it did not really matter, whereas now the clinical edge is beginning to show and then makes him an even more dangerous proposition. Kyogo is the joint top scorer in the SPFL with seven goals in 10 games averaging a goal every 95 minutes.

He has provided two goals and one assist in four Europa League group stage matches, whilst also adding three goals in the qualification phase against Jablonec and AZ Alkmaar. Already, he has proved himself against a top calibre of opposition and he is integral to everything positive about this Postecoglou system at Celtic.

A gem that came from nowhere, but for anyone in Asia a Kyogo move to Europe has been years in the making and Celtic are reaping the rewards of their £5m transfer for a player that, at 26-year-old, is ready-made for a top five European league.

His arrival in Scotland was met with question marks from some quarters who expected the forward to be overcome by the physicality of the game. The fact Kyogo has quickly laughed that off and systematically handed out punishments to defence after defence in the SPFL speaks not only to his character, but to just how good and unique a talent he is.

Where Kyogo goes from here is anyone’s guess, but right now he is everything Celtic supporters want in a player, everything Ange Postecoglou wants in a player, and at this rate over a couple of seasons, legend status is an inevitability.