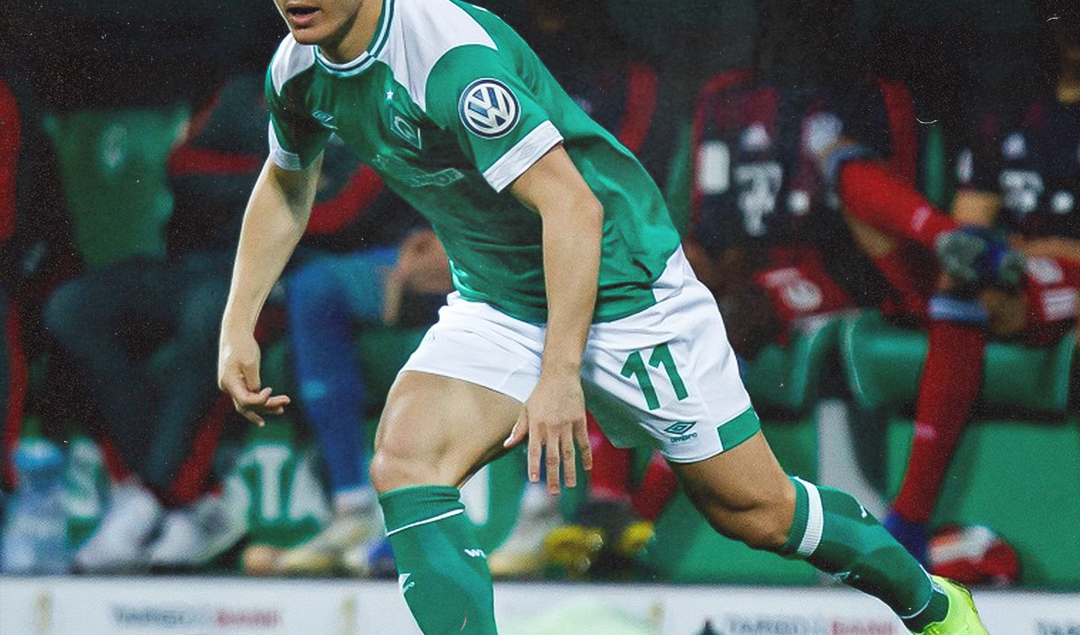 Milot Rashica is a 23-year-old winger playing for Werder Bremen in the Bundesliga. Although his club is currently struggling in 17th place, nine points away from automatic safety, Rashica has impressed – registering 10 goals and four assists in all competitions for Bremen. Since joining from Vitesse in January 2018, the Kosovan forward has gone on to attract interest from Champions League sides such as Liverpool and RB Leipzig — the latter of whom could sign him to replace the potentially outgoing Timo Werner.

As seen in the heat map below, Rashica has mainly been deployed on the left flank this season. He has played as a winger in a 4-3-3, an inside forward in a 3-4-2-1, and a second striker in a 4-4-2 – evidence that he can operate in various roles for pragmatic sides that change their setup on a regular basis. It is important to note that unlike Liverpool or Leipzig, Rashica is currently playing in a team that concedes possession and grants him fewer scoring opportunities than he would typically enjoy in a Champions League side.

With Bremen sitting back and attempting to hit on the counter, Rashica is their designated player to carry the ball in transition, dribble past defenses, and find his teammates in advanced positions. He ranks 17th in the league for progressive runs, with 2.58 per 90 minutes, and sits 9th in the league for average dribbles per 90 with 7.1.

In this scenario below, Rashica receives the ball in his own half, drives forward from the right flank to the center, before launching a through ball to David Selke, who finds himself isolated in space against Dan-Axel Zagadou. Rashica’s dribbling ability and speed of thought allows Bremen to launch deadly counterattacks, while his precise passing allows him to pick out his strikers who are making supporting runs.

All in all, Rashica’s ability to progress the ball forward with his dribbles, coupled with his spatial awareness and off-the-ball movement, makes him a multi-faceted threat on the left wing, and his skillset will be exploited even more if he makes the step up to a Champions League side.

In the chart below, we compare 29 forwards from top five leagues who play in teams that average less than 50% possession, analyzing both their progressive runs and expected goal (xG) contributions. Not only does Rashica stand out as a forward who can cut through defenses and progress the ball forward, but he also draws attention for his end product as well.

Aside from his progressive runs and xG contributions, Rashica also excels at crossing. He ranks 15th in the Bundesliga with 3.38 crosses per 90, and amongst the top 15 crossers, he ranks first in terms of accuracy (35.28%). Thanks to the separation that he achieves before sending in the crosses, Rashica has ample time and space to set up his placement and perfectly place his delivery.

Apart from boasting speed, quick dribbling, and vision, Rashica’s positional awareness allows him to exploit his teammates’s supporting movements. Thanks to his cunning off-the-ball movement, he can stretch the defense and create space for his teammates, despite not touching the ball.

In this scenario below, Rashica positions himself to the left of Wolfsburg’s back three and makes a blind-side run into space to latch onto Maximilian Eggestein’s through ball. Whilst Wolfsburg’s double pivot of Joshua Guilavogui and Max Arnold are focused on blocking Eggestein’s pass, and whilst William and Jeffrey Bruma are occupied by the center forward Claudio Pizarro, Rashica makes a darting run into the final third, before slotting the late winner past Koen Casteels in goal.

Whilst Rashica ranks 15th in the league in terms of offensive duels won, he prefers to beat his opponent for speed rather than strength, using his excellent off-the-ball movement to zoom past the defenders’ field of vision and making the run into space.

As Bremen’s primary offensive outlet, Rashica reserves his energy for the attacking side of the game, choosing to sit back and hit on the counter rather than pressing high up the pitch. In this example against Bayer Leverkusen, he follows Kerem Demirbay closely to cut off the passing option, before eventually intercepting the ball and launching a counterattack.

Werder Bremen have paid the price for failing to adequately replace Max Kruse, who left for Fenerbahçe last summer on a free transfer. As a result, their attack and general play has struggled, with SBD reporting that the club now has a 70% chance of finishing in the bottom two, a far cry from last season’s 8th-placed finish. Nevertheless, Rashica has played a key role in Die Grün-Weißen’s both during this season and last season, the latter of which saw Bremen come a point within Europa League qualification.

The departure of Kruse has shouldered Rashica with slightly more attacking responsibility, as seen in the graph below. Rashica’s progressive runs have increased from last season, with the Kosovan being tasked with carrying Bremen out of deep areas. However, his other numbers have decreased in conjunction with the team’s decline in its possession and attacking presence.

Bild has reported that his release clause will drop from €38 million to €13 million should Werder Bremen drop down to Germany’s second tier. If so, then he’ll be a can’t-miss bargain not just Champions League sides, but mid-tier clubs who can afford to beef up their attack for a cut-rate price.

If Rashica is to make the step up to a club such as Liverpool or Leipzig, he will have to adjust to the physical demands necessitated by a high-octane pressing system. Nevertheless, Jürgen Klopp and Julian Nagelsmann have worked wonders with plenty of attacking talents before him, and there’s no doubt that Rashica’s game will go up a notch under either of the German tacticians.