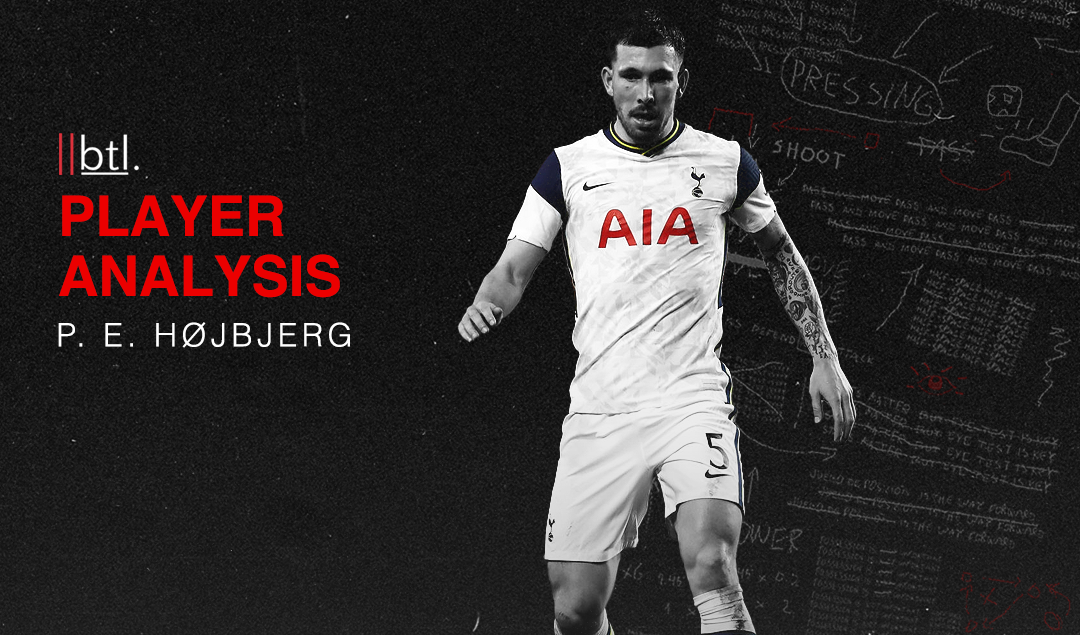 Following a disappointing sixth-place finish last season, José Mourinho’s Tottenham Hotspur find themselves atop the Premier League table after 12 matchdays. Harry Kane and Son Heung-Min have stole the show in attack, whilst Tanguy Ndombélé has gained plenty of attention for his stellar performances in England after a challenging adaptation period in England. But it is the unsung hero in midfield — Pierre-Emile Højbjerg — whose arrival from Southampton has transformed Spurs from also-rans into contenders.

Born in Copenhagen, Højbjerg began his career at local side BK Skjold, where he would feature for the club’s u-19 side despite being just 13 years old, modeling his game after Zinedine Zidane and playing a wide variety of positions from right back to central midfield. He soon joined Copenhagen’s academy, but forced an exit at 14 years of age after becoming frustrated at his manager’s efforts to play him as a central forward.

Højbjerg headed out the back door and joined Copenhagen’s rivals Brøndby IF, where he would spend the next three years, earning the ‘Danish under-17 Player of the Year’ award before joining Bayern Munich in July 2012. It was here in Bavaria where Højbjerg would become the youngest player to ever play for Bayern in a Bundesliga match, developing under legendary managers Jupp Heynckes and Pep Guardiola, and starting the 2014 DFB-Pokal Final, a 2-0 victory over Jürgen Klopp’s Borussia Dortmund.

The summer arrival of Xabi Alonso added to a star-studded midfield cast of Thiago, Philipp Lahm, Bastian Schweinsteiger  and Javi Martínez, and Højbjerg soon realized he needed to depart Munich for regular playing time. He joined Augsburg on loan on January 7, 2015, and the following season, he joined Schalke on a season-long loan, racking up 30 appearances for The Royal Blues. 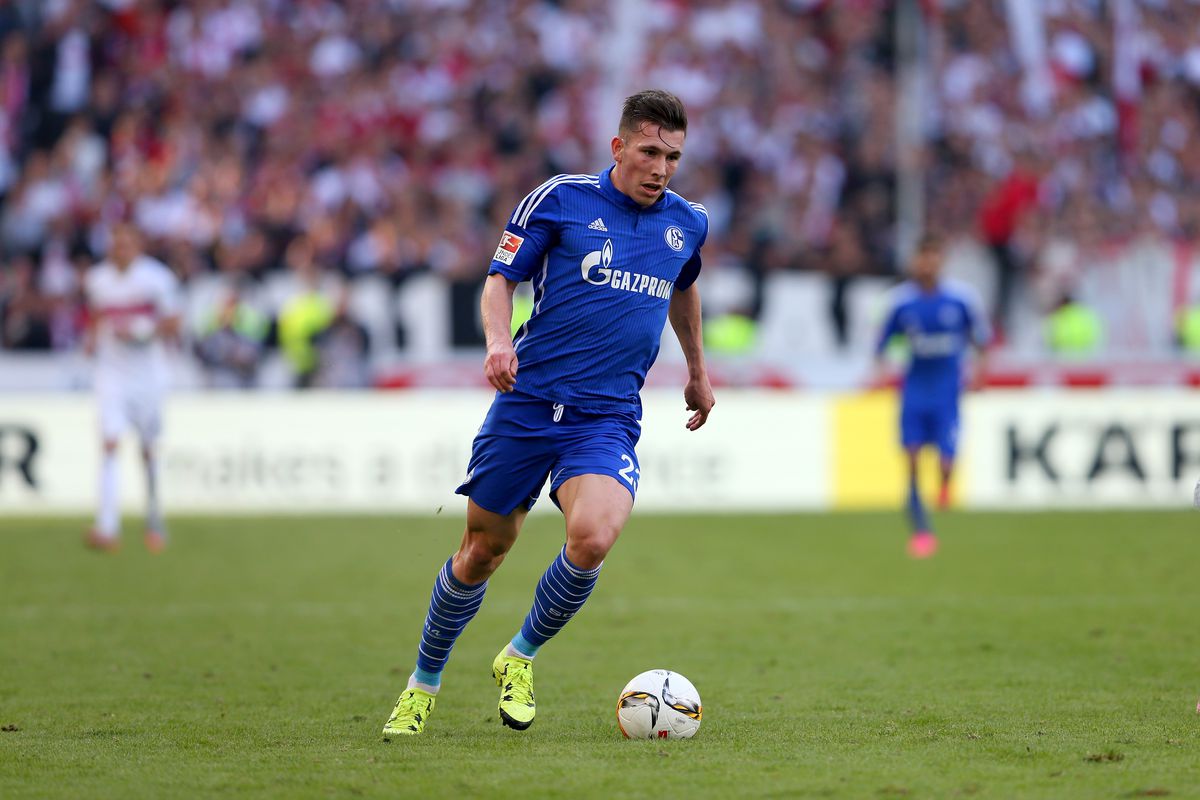 After four years in Germany, the Danish midfielder joined Southampton on a five-year contract for a fee of £12.8 million, replacing the outgoing Victor Wanyama who reunited with former Saints manager Mauricio Pochettino at Tottenham Hotspur. Højbjerg became a vital performer at St. Mary’s, earning the captain’s armband from manager Ralph Hasenhüttl and attracting interest from a bevy of suitors.

It’s why, with just a year remaining on his contract, he announced his desire to leave the club, a decision that saw him stripped of the captaincy. Monaco, Everton, Ajax and even Bayern registered interest in Højbjerg, but he held out for a move to Tottenham Hotspur, joining the North London club for a fee of £15 million plus add-ons.

Højbjerg’s debut for Spurs came against Carlo Ancelotti’s Everton, one of the teams that had fought so desperately to sign him in the summer. Starting on the right side of a double pivot alongside Harry Winks, the Dane failed to impose himself against the likes of Allan and Abdoulaye Doucouré as the Toffees held on for a 1-0 victory in London following a second-half goal from Dominic Calvert-Lewin.

Spurs bounced back with a 5-2 victory at St. Mary’s, but they succumbed to a 1-1 draw against Newcastle following a controversial penalty goal from Callum Wilson in the 97th minute. Rather than withdraw him from the team, Spurs manager José Mourinho tweaked his position, playing him as the deep-lying midfielder in his 4-2-3-1, where he would be accompanied by the more adventurous Moussa Sissoko in the double pivot.

Standing at 1.84m (6”0’) and weighing 184 lbs, his build is a near-perfect one for any modern day player; muscular, tall, and robust, and his agility and swiftness on the ball is incredibly profound for someone of his build. The way he glides with the ball allows him to be press resistant and rarely get dispossessed – a trait every manager in world football wants in his holding midfielder.

At Southampton, Højbjerg was deployed as an all-action #8 in a 4-3-3 / 4-4-2 for the most part. This meant that he had a huge role defensively, and most startling – offensively. Driving up the field with the ball in his feet isn’t the Danish’s best trait by any means, and neither is chipping in with a good amount of goals, as proven by his laughable 4 league goals in 109 Premier League appearances with the Saints.

However, he is playing the best football of his career under Mourinho, who has engineered one of the most balanced midfield trios in Europe with Sissoko, Ndombélé and the Danish midfield maestro. Sissoko’s first-rate physical power and stamina allows Højbjerg to roam around the pitch more, whilst Ndombélé’s world-class press resistance helps to create space for him to receive in midfield. 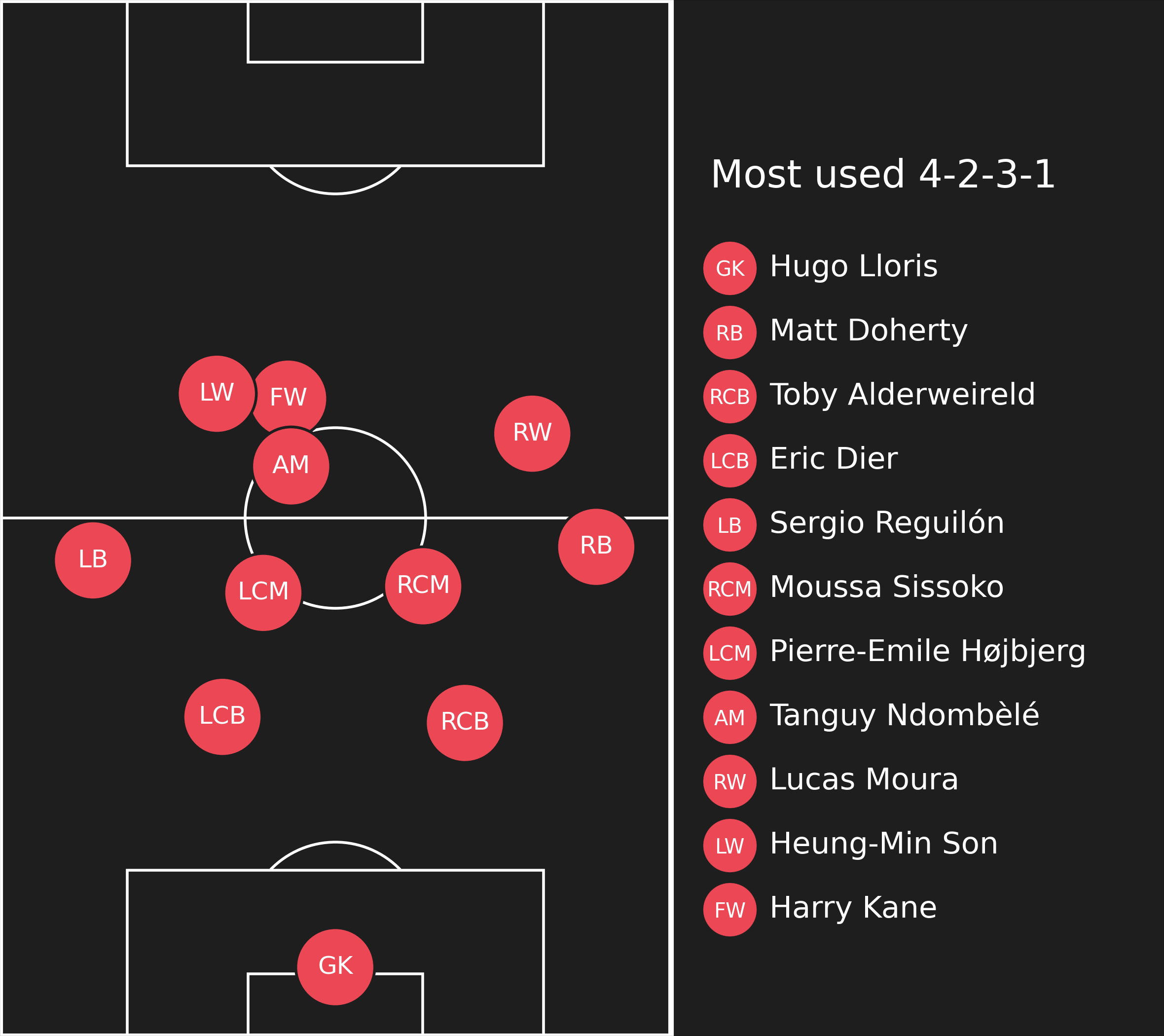 Part of what makes Højbjerg such an intelligent, proactive midfielder is his ability to drop into different positions to receive the ball and progress possession into the second phase. Averaging 87 touches per 90 in the Premier League for Spurs this season, it’s clear to see that he is the heart of the Spurs defense to attack transition; whether it’s from goal-kicks, recycling play, or counter-attacks.

In the below example against West Bromwich Albion, Højbjerg drops deep into a central centre back role in possession. He forms a back three alongside Eric Dier and Toby Alderweireld, drawing several West Bromwich players into the central area. This provides Tottenham with more passing angles against the opposing side’s pressure and allows them to safely progress the ball further forward. 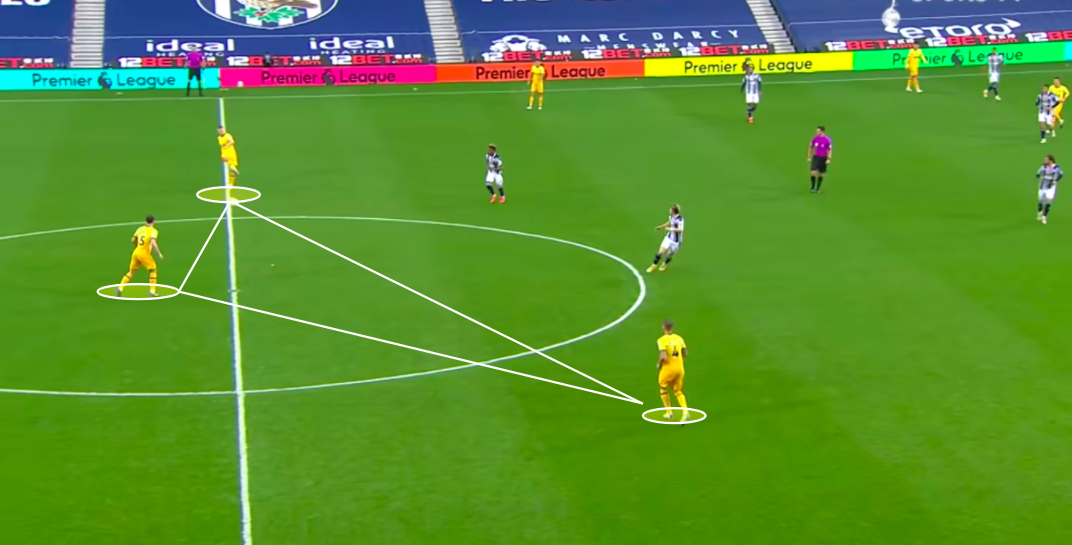 Højbjerg’s dropping movement allowed Spurs fullbacks Sergio Reguilón and Matt Doherty to push forward and enabled Alderweireld to receive in a slightly advanced position and drive forward with the ball, as Conor Gallagher chose to follow Lucas Moura rather than mark the Belgian.

Alderweireld played a short pass to Doherty, who was isolated on the right flank, and the Irishman chipped in a delectable cross to Kane. Kane held off Kyle Bartley with ease before heading the ball past Sam Johnstone and into the back of the net. Tottenham would hold onto their lead in the dying minutes and prevail with all three points at The Hawthorns.

In this example against Burnley, Højbjerg drops into the left back position, allowing Ben Davies to push forward and create more dynamic passing angles. Moreover, Sissoko drops deeper into the vacated space to provide two reliable options for the Dane against the onrushing Jóhann Berg Guðmundsson.

With 24 successful tackles this season, Højbjerg ranks second in the Premier League, behind Brighton’s Yves Bissouma (25) and tied with Leeds fullback Stuart Dallas. His 10 interceptions also place him second amongst his Tottenham teammates, one ahead of Doherty and two behind Sissoko.

The composure that Højbjerg holds in tight and chaotic situations is one of his strongest attributes. In this example, West Brom forward Karlan Grant gets dispossessed by Højbjerg after he succeeds in his second tackle attempt. He looks up and immediately spots Gareth Bale open in the left half space, before playing the Welshman into acres of space. 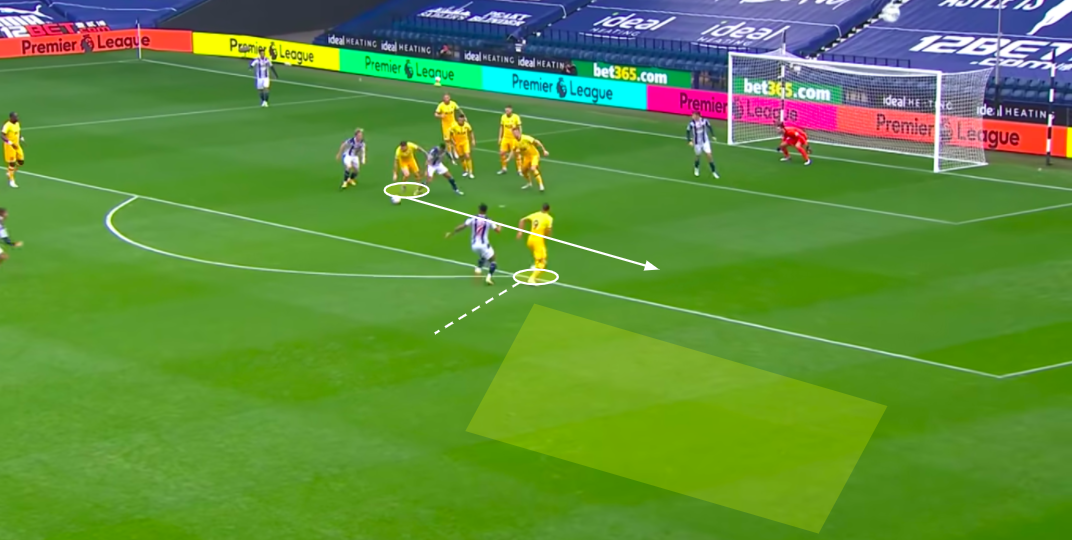 In the below example, Højbjerg acts as a middle center back off the ball in order to keep his side compact in the box against West Ham’s attack. With Reguilón recovering from an advanced area, Højbjerg steps in to and positions himself in a deep area in order for Spurs to maintain a compact back four. This allows Davinson Sánchez to shift to the left and mark West Ham’s right-sided forward Pablo Fornals. 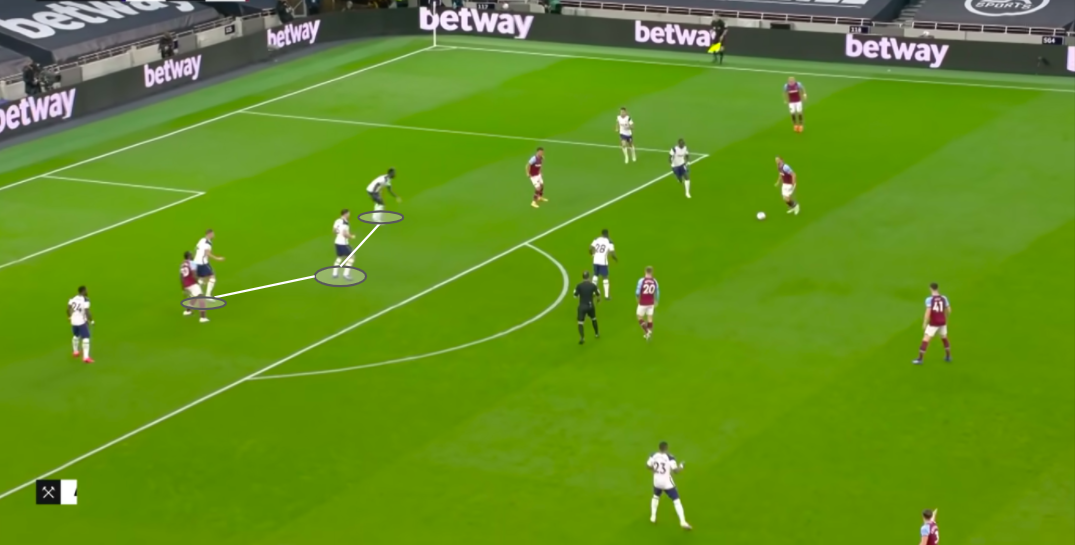 The Danish midfield metronome is also a reliable passer of the ball, ranking fourth in the Premier League in passes completed with 792 passes behind Rodri, Michael Keane, and Gabriel Magalhães. His simple yet effective passes are pleasing on the eye, but something that goes under the radar are his passes in the final third, which exhibit his underrated vision and his ability to find runners in channels.

We saw an example of this in Tottenham’s 6-1 thrashing of Manchester United. Lucas Moura drifts inwards to drag in Luke Shaw and free up space on the right flank, and the Brazilian controls Sissoko’s pass and lays it off for Højbjerg. The Dane plays a first-time through ball to the onrushing Serge Aurier, who takes advantage of Paul Pogba’s loss of concentration and latches onto the pass, before scoring the fifth goal past David De Gea. 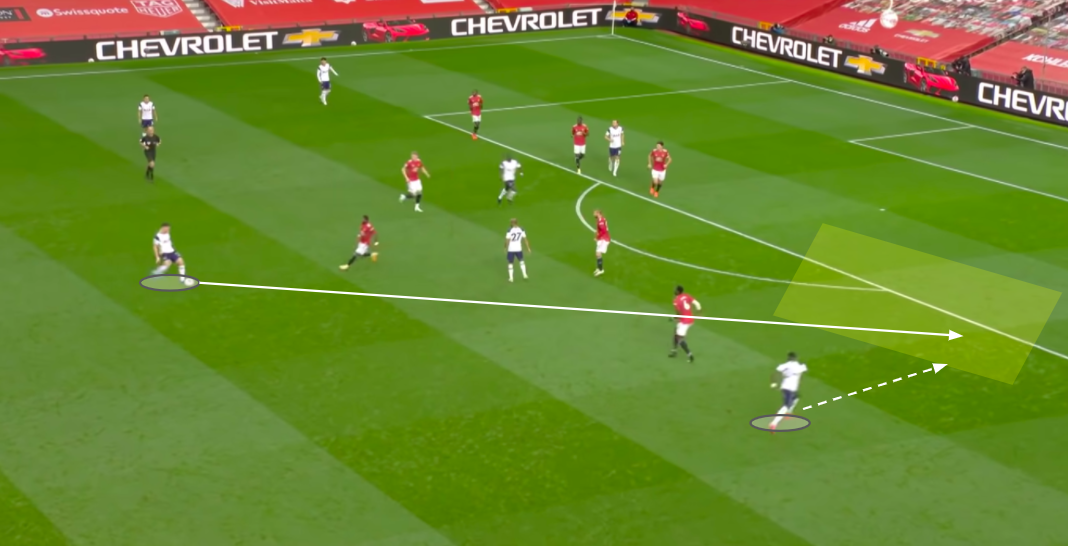 Højbjerg helped to create the opening goal, finding Son between the lines, who passed it to Kane in space. The Englishman held off Isaac Hayden and played a cross to Moura, who tapped in the opening goal. He nearly created another goal, receiving the ball from Doherty and instantly looking up to scan his available targets in the penalty area.

Attacking midfielder Giovanni Lo Celso moves towards Højbjerg to draw in Newcastle left back Matt Ritchie, and Højbjerg executes a beautiful cross into Kane who unleashes a powerful header on target. Unfortunately for Højbjerg, Kane, and Tottenham, Newcastle goalkeeper Karl Darlow’s heroics denied Tottenham a second goal and a victory. 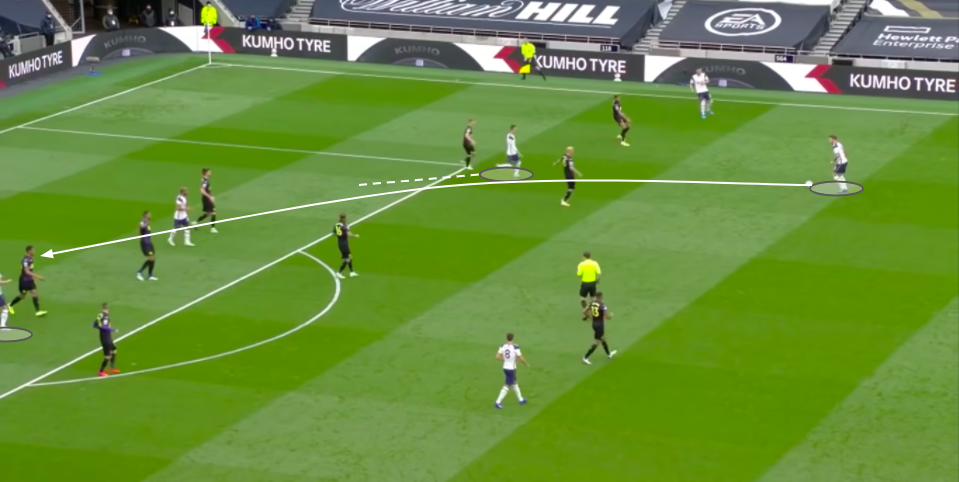 Going up against West Ham at the Tottenham Hotspur Stadium, Spurs opened the scoring in the first minute via Son before adding another goal seven minutes later. Son finds Højbjerg in ample space, and the midfielder patiently bides his time, searching for a passing option before passing it back to Son.

The South Korea international taps it into the path of Kane, who evades both Tomáš Souček and Declan Rice before beating Łukasz Fabiański from long range. Spurs would add a third goal in the 16th minute, but they were forced to settle for a draw after an improbable comeback in the dying minutes from David Moyes’s Hammers. 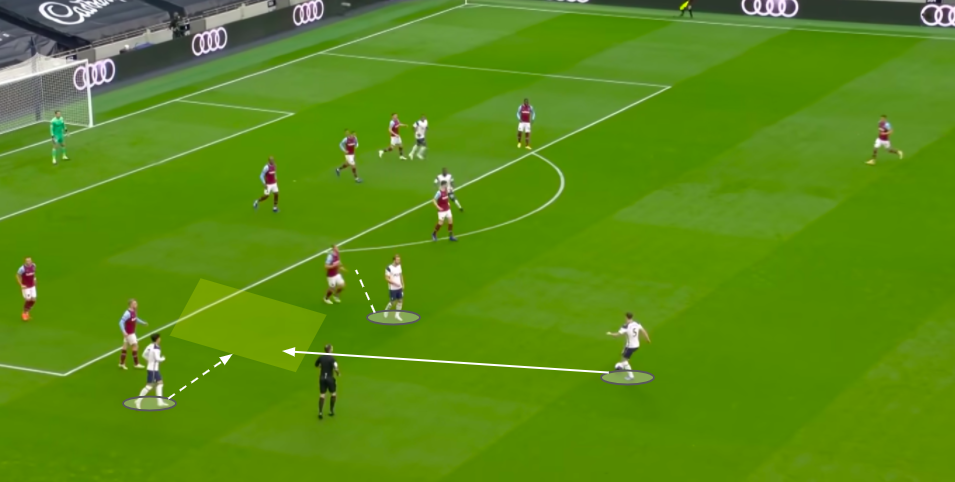 For £15 million, Pierre-Emile Højbjerg is proving to be one of the biggest bargains of the summer transfer window, and at 25 years of age, he’s still a few years away from reaching his prime. He has been the glue in midfield for José Mourinho’s high-flying Tottenham side, and after missing the cut for Denmark’s 23-man squad in the 2018 FIFA World Cup, he will finally have the opportunity to play a key role in a major tournament during next summer’s Euros.