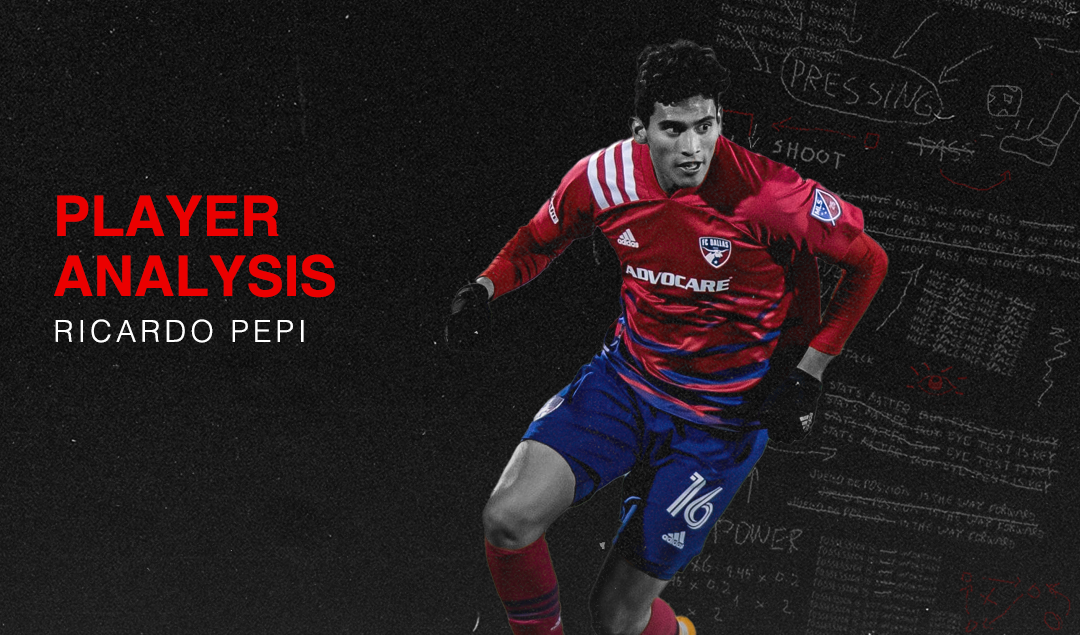 In a club that European scouts are familiarizing themselves with week by week due to the talent produced by the club’s academy, Ricardo Pepi is a standout product for FC Dallas. The club has shipped off Bryan Reynolds to Roma, Tanner Tessmann to Venezia, and Reggie Cannon to Boavista in the past 12 months, as well as playing a key role in the development of Juventus’ Weston McKennie and Bayern Munich’s Chris Richards. So why is Pepi a standout player in a club which currently features at least three European-bound academy products and has a growing past of successful exports?

In 2019, U.S. Soccer added a third level to their pyramid with USL League One. FC Dallas used this opportunity by creating North Texas SC, a club that would compete in the new league and would largely feature young talent not yet ready for the first team. In the club’s first-ever game, Pepi scored three goals in a 3-2 win. North Texas would go on to win the inaugural USL League One season with a 16-year-old Ricardo Pepi scoring a goal every 102 minutes which equated to 11 goals in just over 1,100 minutes.

Pepi made the jump to MLS in 2020 and even found a 90th-minute equalizer in the second of just two MLS games played before the Covid-19 pandemic. Unfortunately, when the season returned the young striker started just four games in the regular season but was able to find a goal off the bench in a playoff game to help FC Dallas move past the Portland Timbers.

Almost every time Pepi has been given a chance to score goals, he’s proven he can do the job. Fans would not appreciate another season of watching a likable local kid sitting on the bench when the alternatives were not finding the back of the net. Now 18 years of age, Ricardo Pepi is finally getting the minutes he deserves in Major League Soccer and is among the hottest topics in a league selling domestic player his age to Europe every window.

Midway through the 2021 MLS season, the young American forward has nearly matched the goalscoring rate of his 2019 campaign, the last time he was given a run at consistent minutes. In 863 minutes this season, Pepi has scored eight goals, good for one every 107 minutes, and sits fifth in the race for the golden boot.

Pepi’s ambitions are not compromised by attitude. Despite a dream of playing in Europe and at times previous just simply getting regular first-team minutes in MLS, Pepi’s attitude has never been an issue for FC Dallas. Despite that, his ambitions are clear with him recently stating, “One of the goals I had before the season was scoring 25 goals this season and that’s still my goal. It’s going to be my goal for the rest of the season.”

Many readers will be familiar with the fact that Ruud van Nistelrooy scored just one of his 150 Manchester United goals from outside the penalty area. It’s no secret the Dutchman remained a goal threat nonetheless due to immense finishing when faced with just a goalkeeper to beat. Ricardo Pepi is no different in that sense with all eight of his goals coming from inside the penalty area this season.

Whether the ball falls to his feet with a bit of luck in the area, or one of Pepi’s runs between the center defenders results in him alone with the keeper, fans rise to their feet anticipating the net to bulge. Having a multitude of ways to find yourself in these situations is what leads to goals in abundance. Let’s look at three goals from the 2021 MLS season which highlight the strengths of Pepi and show the variety of ways the teenager can score.

The first goal being looked at is against the New England Revolution and highlights Pepi’s ability to create chances for himself on the dribble. In 2021, Pepi finds himself in the 96th percentile of MLS players regarding successful dribbles that lead to a goal, and this goal would be the prime example.

In the first image, you see Pepi making a run into the empty space left by a fullback who stepped to the ball carrier. The central defender has no choice but to follow and Pepi uses his speed to knock the ball around the defender with his first touch. That engagement is shown in the second image.

The young forward now drives towards goal and is seemingly ready to have a shot as shown in the third image. Instead, Pepi shifts the ball past the fullback now covering for the central defender erased from the play by the teenager’s dribbling.  Image four shows Pepi just before striking the ball past confident shot-stopper Matt Turner. 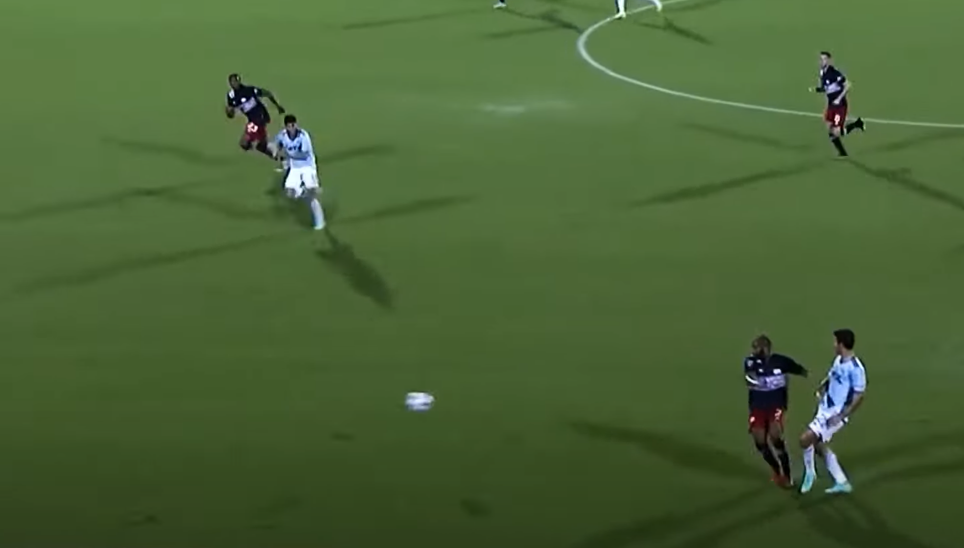 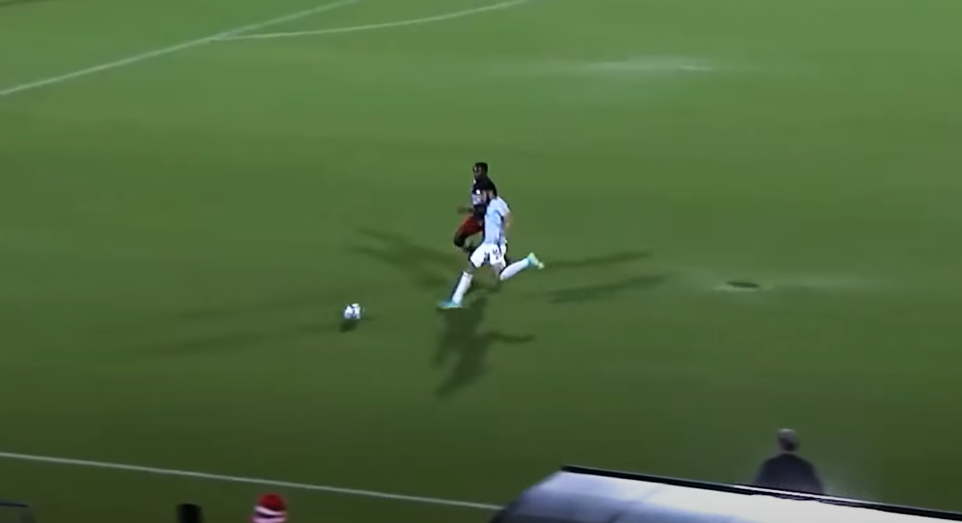 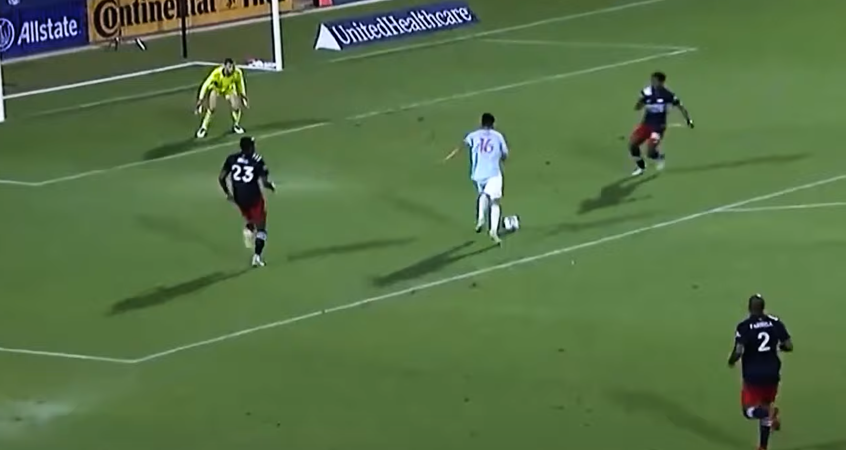 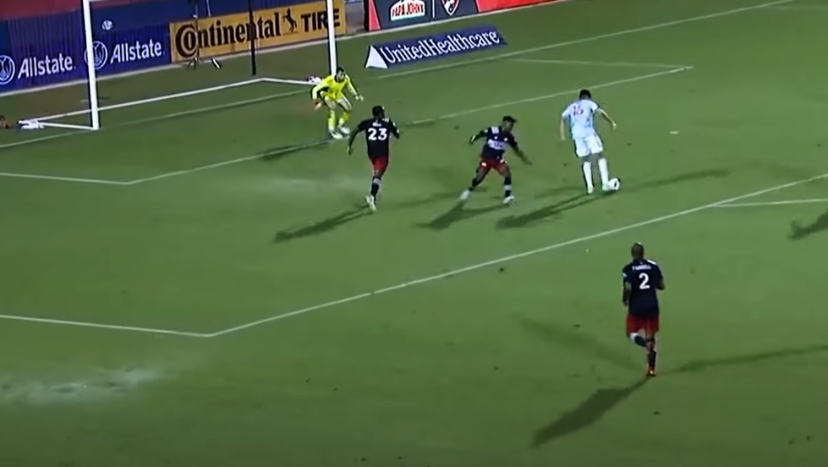 The next goal is against the San Jose Earthquakes and will highlight the anticipation or “right place, right time” trait all great goal scorers have, even at a young age. In the first of the three images below, Pepi is the player on the far right at the top of the penalty area watching his teammate dribble past the last man to beat before being alone with the goalkeeper.

In the second image, an Earthquake defender attempts to help his goalkeeper by covering the angle the ballcarrier has to the far post. Pepi notices this and keeps his distance rather than continuing his run to the back post. The rebound falls to the feet of Pepi as shown in image three and the 18-year-old converts.

Finally, the third goal is against the LA Galaxy and is his first of three on a night which saw him become the youngest hat-trick scorer in MLS history. The first image shows Pepi drop the ball off to his central defender.

The defender quickly plays the ball into an FC Dallas midfield player as seen in figure two which triggers Pepi to run into the space left behind by the teammate receiving the ball. Pepi continues his run as shown in images three and four and finds himself alone with the goalkeeper which only leads to one outcome. 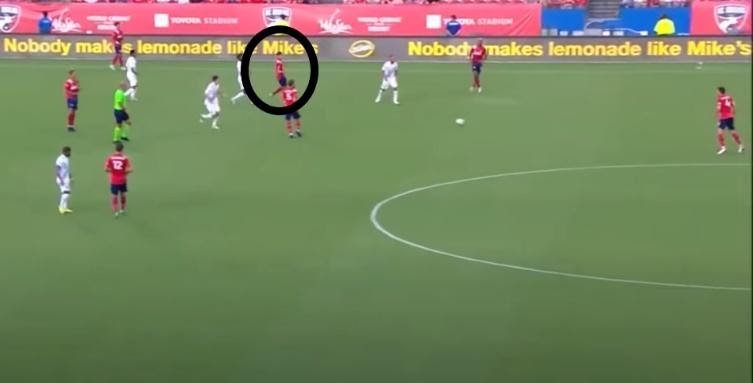 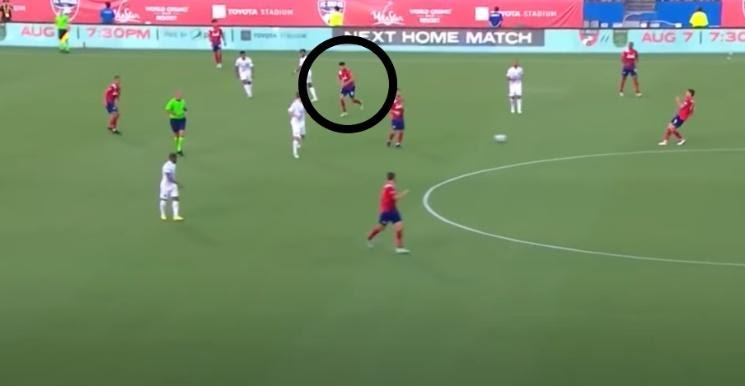 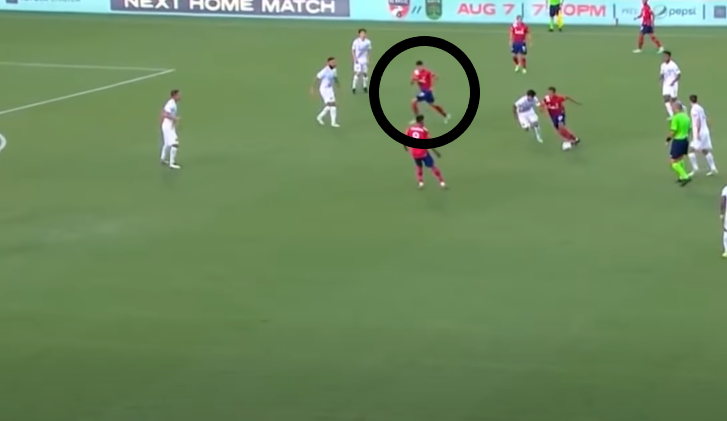 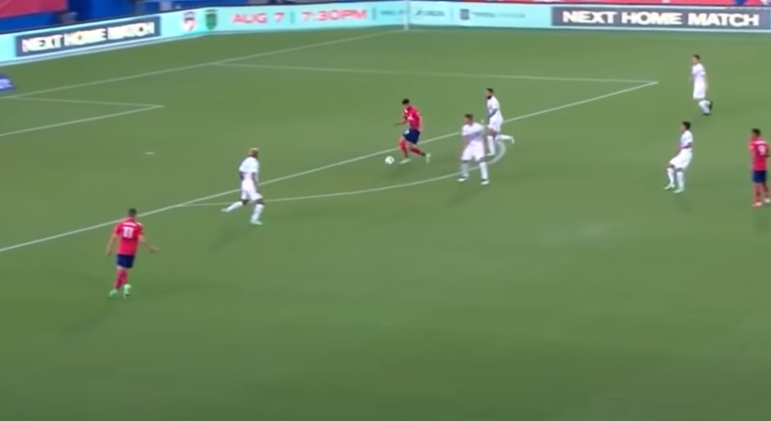 Ricardo Pepi is a threat when he enters the penalty area, and unfortunately for defenders, he threatens your backline in many ways and finds himself with the ball in the penalty area quite often. Through dribbling, relentless runs behind the defense, and a predatory instinct, any club which purchases Pepi is buying a goal scorer who has proven he’ll succeed at every level he’s been at.

However, Pepi is more than a goal scorer. In the 84th percentile among MLS forwards, the young forward impresses with his tackling and interceptions as well, making him even more of a defender even when Dallas is out of possession.

At just 18 years of age, Ricardo Pepi has broken MLS records and made himself stand out in an academy which does not struggle to produce talent. With interest from Serie A already evident, FC Dallas just penned a contract with the young forward through 2026. This will increase the sum of cash a European side is going to have to pay and will likely lead to the largest fee for an American departure from Major League Soccer.