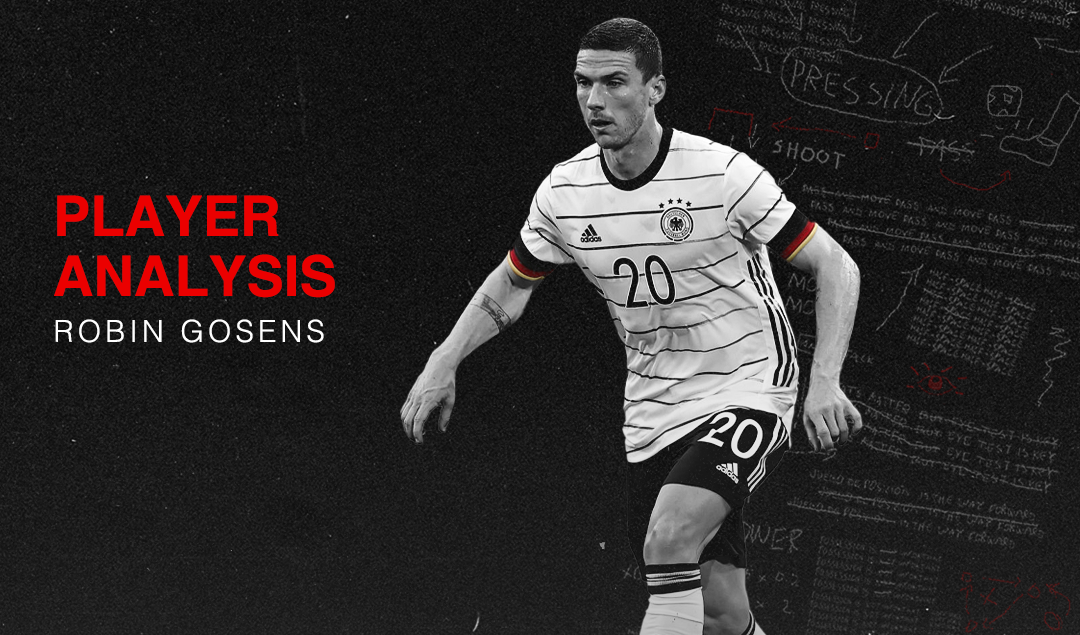 “I wanted to be a police officer; I was quite certain of that. When my grandfather first put me in his police car when I was seven, I thought I would follow in his footsteps. If it hadn’t worked out in football, I probably would have gone down that route first. Looking back, I’m glad I didn’t have to because I don’t think I would have been happy in the long run.”

Those were the words of Robin Gosens in an interview on the DFB website in December 2020. After a slow start to his professional career, the 27-year-old has developed into one of the best attack-minded defenders in the world and he was arguably Germany’s best player in what was an underwhelming Euro 2020 for Die Mannschaft.

The German has had a meteoric rise since arriving at Italian club Atalanta in the summer of 2017 and the left wing-back has been linked with some of the biggest football clubs in Europe such as Juventus, Inter, and Barcelona as well as English Premier League clubs like Manchester City and Leicester City. To prize him away from Bergamo though, interested clubs will have to pay at least €40 million for the 27-year-old.

Born in Emmerich am Rhein, Germany to a Dutch father and a German mother, Gosens decided to represent the land of his birth at the international level, but the early years of his professional football career were in his father’s home country. Prior to moving to the Netherlands, he had played for amateur clubs such as Fortuna Elten, 1. FC Bocholt and VfL Rhede at youth level in Germany and he failed a trial with the Borussia Dortmund Under-19 team.

“The trial at Dortmund was not successful, but they had invited me, so there must have been something about me,” Gosens told the DFB in December. It was perhaps a blessing in disguise because he is a Schalke 04 fan and he would eventually be linked with a move to the club.

In the summer of 2012, the German joined Dutch club Vitesse Arnhem’s youth system after he impressed in one of his matches for VfL Rhede, and he attributed some of his development as a player to the coaching he received in The Netherlands.

“Technique, first touch, coordination. I’d never specifically trained those things before. There are definitely a lot of footballers who have more talent than me, but haven’t had a career like mine. Therefore, I’d say that in today’s game, mentality isn’t something to be overlooked.”

Although he struggled to break into the Vitesse Arnhem senior squad, Gosens was noticed by Dordrecht coach Harry van den Ham in a match between Jong Vitesse and Jong Top Oss in October 2013. Van den Ham persuaded Vitesse to let him go on loan to the Eerste Divisie club for the second half of the 2013/14 season after then-coach Peter Bosz had revealed that he wouldn’t give Gosens much playing time if he stayed in Arnhem.

“I told Peter: ‘This year I want to be champions, and I want him badly,’” van den Ham told The Guardian in June. “So we made a deal, and I got Robin. He had an unbelievable shot and an unbelievable cross, so you had to get him on the other side of the opponent and coming into the box. Once he did that, he probably became our best player, in the end. And as he became better and better, his voice in the dressing room also became important.”

Gosens played 16 league matches for Dordrecht and then four games in the play-offs as the club went on the earn promotion to the Eredivisie for the first time in 19 years. He then scored twice in 31 appearances in the 2014/15 Eredivisie season but the club finished on the bottom of the league. The German returned to Vitesse Arnhem but he was sold to Hercules Almelo for €200,000.

Gosens spent two seasons with the eastern Dutch club, scoring five goals and providing seven assists in 70 competitive appearances, and these performances caught the attention of Atalanta. La Dea were going to participate in a European competition for the first time since the 1990/91 season, but they decided to recruit within their budget, and the Italian club paid Hercules Almelo a reported fee of €1.2 million in the summer of 2017.

Playing time during the 2017/18 campaign was limited for Gosens. Hans Hateboer, who had also joined from the Dutch Eredivisie, was a regular feature at right wing-back and he had to fight it out for a spot on the left flank with Leonardo Spinazzola and Timothy Castagne.

After playing 21 times in his first season in Serie A, scoring a goal and providing an assist in the process, the German played 28 matches throughout the 2018/19 Italian league season. He also found the back of the net on three occasions and he supplied two assists.

The Orobici had qualified for the UEFA Champions League for the first time and they had also reached the Coppa Italia Final but lost 2-0 to Lazio. Nevertheless, a wing-back like Gosens was important part of the system implemented by Coach Gian Piero Gasperini.

Gosens was given more playing time throughout the campaign while Castagne displayed the ability to play on both flanks and Hateboer provided the attacking threat on the right flank but the best was yet to come from the German.

He has functioned well as a left wing-back, covering the flank with great pace and stamina, and combining well with teammates whenever La Dea create overloads on the left, and from 2019/20 onwards, he would constantly demonstrate his ability to get into scoring positions like a forward.

Gosens scored nine goals and provided eight assists in 34 Serie A matches during the 2019/20 season while also scoring a goal in eight UEFA Champions League appearances in Atalanta’s run to the quarter-finals in its debut in the competition.

It is incredible to think in hindsight, he was close to joining Schalke 04 at the end of the 2018/19 season. He would have been playing for the club of his dreams but football fans would not have witnessed the meteoric rise he has had at Atalanta. Unfortunately for him at the time, both clubs could not agree on a transfer fee. Die Königsblauen offered €10 million for Gosens whereas La Dea wanted at least €12 million.

“I knew exactly what I wanted,” Gosens told Bild in April. “A move to Schalke would not only have fulfilled my dream of playing in the Bundesliga, I would also have been able to play for my favorite club and, above all, live in Germany again.”

“I was told that the contract with Schalke had been negotiated and all the details had been sorted out. I was incredibly happy. The conditions were perfect so I went on vacation hoping to be a Schalke player soon. It didn’t go as those involved had imagined. Atalanta didn’t want to let me go under any circumstances.”

Gosens was rewarded for his form at La Dea with his first cap for Germany in September 2020 in a 1-1 draw against Spain in the UEFA Nations League and his next three appearances for Die Mannschaft would also result in draws.

If his 2019/20 season was impressive, the German international bettered his tally in 2020/21 by scoring 11 goals in 32 Serie A appearances as well as supplying six assists. Atalanta reached the Round of 16 of the Champions League, sealed qualification for Europe’s premier competition for the third season in a row, and it reached the Coppa Italia Final, which it lost to Juventus.

Gosens has been a fundamental part of that success and Joachim Löw selected him for the Germany squad at Euro 2020. Prior to the tournament, the Atalanta played in his first victory for his country, also scoring his first international goal in a 7-1 thrashing of Latvia in a friendly. Germany played France in its first game in Group F and lost 1-0 to Les Bleus, but Gosens was a bright spot with his attacking play on the left flank and was generally considered to be Die Mannschaft’s best player in that match.

The Germans faced Portugal in the next match and it was a special game for the Atalanta defender as he was playing against Cristiano Ronaldo. He had played against him whenever La Dea faced Juventus and a post-match moment left the German disheartened.

“After the final whistle I went to him, having not even gone public to celebrate,” he wrote in his book ‘Träumen Lohnt Sich’ (Dreaming is Worth It).  “But Ronaldo did not accept. He didn’t even look at me, he just said: ‘No!’ I was completely ashamed.”

This time, Gosens could really be proud himself. The Atalanta wing-back scored a goal, provided an assist for Kai Havertz, forced Rúben Dias into scoring an own goal, and had another goal disallowed in Germany’s 4-2 victory against the Portuguese.

He earned a standing ovation from the Munich crowd when he came off after 62 minutes and he earned the Star of the Match award. He also played a fine game against Hungary when the two sides drew 2-2 in the final Group F game but he could not make a sufficient impact when England eliminated the Germans in the Round of 16.

Despite his growing reputation, Gosens is remaining humble. He also scored for Atalanta in a 2-0 victory away to Liverpool in the 2020/21 Champions League but big games still aren’t considered normal for him.

“In my eyes and with respect to the journey that I’ve been on, it is simply not normal to run out against Liverpool at Anfield, let alone score a goal,” he said to the DFB last December.  “Who do you tell about that? It shouldn’t be considered normal. It’s what millions of children dream of. Of course, you need a certain routine to be able to perform to your best, but if I were to consider what I am experiencing as normal, I would be going about it the wrong way.”

Gosens might have had humble football origins but fans can be glad that the German international did not become a policeman. Instead of patrolling the streets of Emmerich am Rhein, he is patrolling the left flank for Atalanta and Germany with panache.