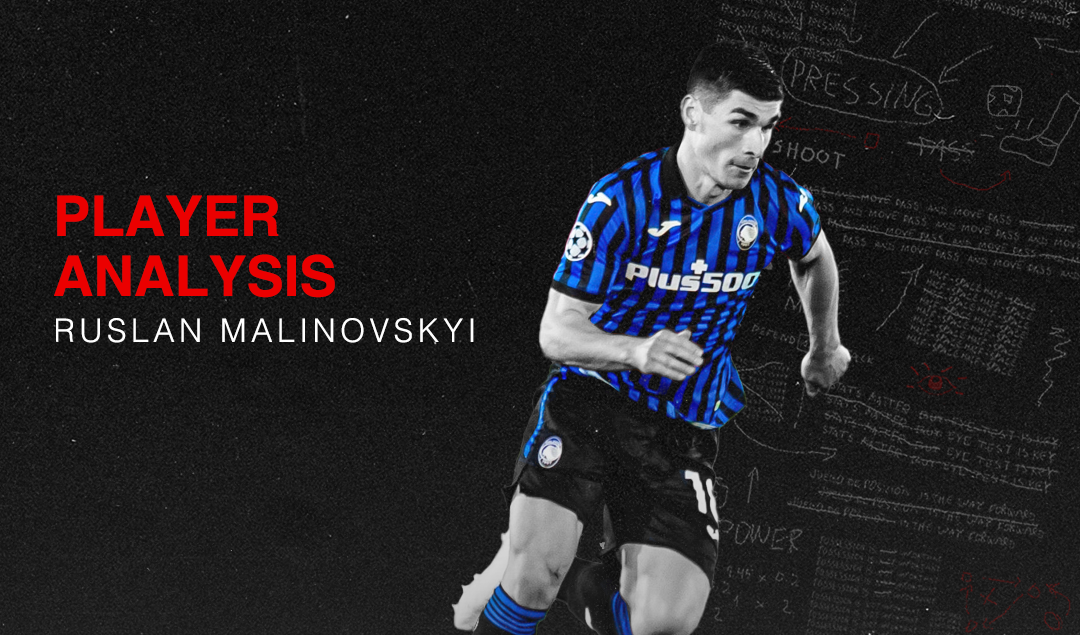 Since Gian Piero Gasperini was appointed coach of Atalanta in the summer of 2016, the Italian club has developed a reputation as one of the most entertaining teams in Europe, and the former Genoa and Inter tactician has brought the best out of creative players like Alejandro “Papu” Gómez and Josip Iličić. Unfortunately, a reported falling out between Gómez and “Gasp” meant that the diminutive Argentine was sold to Spanish side Sevilla in January while the mercurial Slovenian has had to deal with physical and other personal issues in the last year or so.

In recent weeks, there have been some intriguing changes at Atalanta; Gasperini’s switch from the 3-4-1-2 formation to the 4-2-3-1 and the remarkable burst of form from Ukrainian midfielder Ruslan Malinovskyi. The 27-year-old has scored four goals and provided eight assists in 29 Serie A matches during the 2020/21 season so far, but his form in the last four rounds in particular has been incredible, finding the back of the net twice and assisting in five goals.

When Malinovskyi arrived from Belgian club KRC Genk in July 2019 for €13.7 million, he was expected to provide additional depth with Atalanta’s maiden Champions League campaign in mind. During his first season with the Orobici, the attacking midfielder was mostly used off the bench and his powerful shooting ability was clear to see. Malinovskyi scored eight goals in 34 Serie A games in the 2019/20 season and he had only started 12 of those matches.

KRC Genk: The Starting Point From Some of Football’s Biggest Current Stars

In the Atalanta set-up, Gómez would roam around the ground to collect the ball; Iličić would operate around the right side of the penalty area, drop deep, or drift to the wing depending on the situation; and Mario Pašalić would make late runs from midfield to get into scoring positions.

Whenever Malinovskyi was called upon, he possessed the ability to score goals from long range with his thunderous left foot and he demonstrated that his right foot could boast some power as well. For the 2020/21 season, it seemed that the Ukrainian would have to be content with his role as an impact player off the bench. In the first seven rounds of the Serie A campaign, the 27-year-old would start three times and provide two assists.

Malinovskyi contracted COVID-19 in November, missing out on Ukraine’s 3-0 defeat to Switzerland in the Europa League as well as two of Atalanta’s Serie A matches. He scored on his league return in La Dea’s 3-0 victory against Fiorentina in Week 11 but his next league goal did not come until Week 24 against Sampdoria.

Prior to Week 28 of the Serie A season, the Bergamaschi had been eliminated by Spanish giants Real Madrid in the Round of 16 in the Champions League. Whether that 4-1 on aggregate defeat or facing Hellas Verona – coached by Gasperini protégé Ivan Jurić – prompted a rethink, “Gasp” decided to uncharacteristically move away from his preferred three-man defence.

While Malinovskyi was recovering from the Coronavirus, Atalanta lost 2-0 at home to the Gialloblù, so Gasperini needed to make sure that he wasn’t outshone by his former pupil at Crotone and Genoa the next time around. The Orobici coach decided to implement that 4-2-3-1 formation, with Rafael Tolói and Berat Djimsiti operating as full-backs, Aleksey Miranchuk operating on the left side of Matteo Pessina in the attacking midfield trio, and Malinovskyi on the right.

Changing the formation proved to be an inspired move. Atalanta registered a 2-0 win against Hellas Verona and La Dea’s Ukrainian midfielder was involved in both goals in the first half. He converted a penalty after Mastini wing-back Federico Dimarco handballed in the penalty area, and he then headed the ball down into the path of Duván Zapata, who sprinted into the box to score the second.

Gasperini stuck with the formation for the following league match against Udinese and Malinovskyi retained his place in the starting line-up. Luis Muriel took the place of Miranchuk on the left side of the attacking midfield trio and the Colombian played a starring role against the Zebrette. Atalanta won 3-2 against the Friulani with Muriel scoring twice in the first half and his compatriot Zapata scoring the third after the break.

Malinovskyi was also inspirational in midfield, supplying passes for two of the goals. The Ukrainian controlled the ball with his right foot, and then provided a through-ball to Muriel, who was running diagonally into the box and then dribbled around Udinese goalkeeper Juan Musso to score his second of the game.

For the third La Dea goal, Malinovskyi demonstrated his vision to spot teammates despite being in a congested area. Nearly three Zebrette opponents were about to close him down yet he still managed to produce a through-ball that went through two of them. Zapata turned around to get the ball and with a defender chasing him down, he still got a shot off with his non-preferred right foot.

When it seemed things could not get better for the Ukrainian midfielder, he produced another exceptional performance in Atalanta’s 3-2 victory away to Fiorentina in Week 30. During this purple patch, he has developed a great understanding with Zapata and he set up two first-half goals for the Colombian against the Viola.

Malinovskyi took a corner from the right and Zapata jumped higher than everyone else to head the ball into the net for the opening goal. The Colombian scored his second of the game when the Ukrainian remarkably chipped the ball through three Gigliati defenders and he was able to beat the offside trap as well as finish with aplomb.

Surprisingly, the 27-year-old’s run in the starting line-up came to an end in the Week 31 match against Juventus. Gasperini knew that his team had given the Bianconeri headaches in the past so he was confident that reverting to the 3-4-1-2 could still give him victory. Due to the formation change, Malinovskyi was replaced by Pessina in the starting line-up, but he still had his say though as he came on in the 72nd minute for Joakim Maehle.

He took a free-kick and slipped as he was following through but the shot was still ferociously accurate and forced Juve goalkeeper Wojciech Szczęsny into making a brilliant save. With three minutes remaining in regulation time, Iličić passed to the Ukrainian and his powerful shot with the aid of a deflection from Alex Sandro found the back of the net.

Atalanta leapt above Juventus in the Serie A standings into third place with 64 points thanks to that victory and they are only two points behind second-placed AC Milan. The purple patch from Malinovskyi has been a much-needed boost as La Dea fight it out against wealthier and more established clubs.

In recent weeks, the 27-year-old has demonstrated that he can be more than just a super-sub. In addition to his thunderous shooting, he possesses clean ball control, great passing vision, and the ability to play delicate through-balls. Despite starting nominally on the right, he moves into more central channels to either provide those sublime passes or take those lethal shots.

Players have come and gone from Atalanta in recent years but new players have been able to adapt to Gasperini’s tactics and improve the team. Malinovskyi is showing that he can be a greater asset to La Dea than first anticipated with his latest set of dazzling displays.