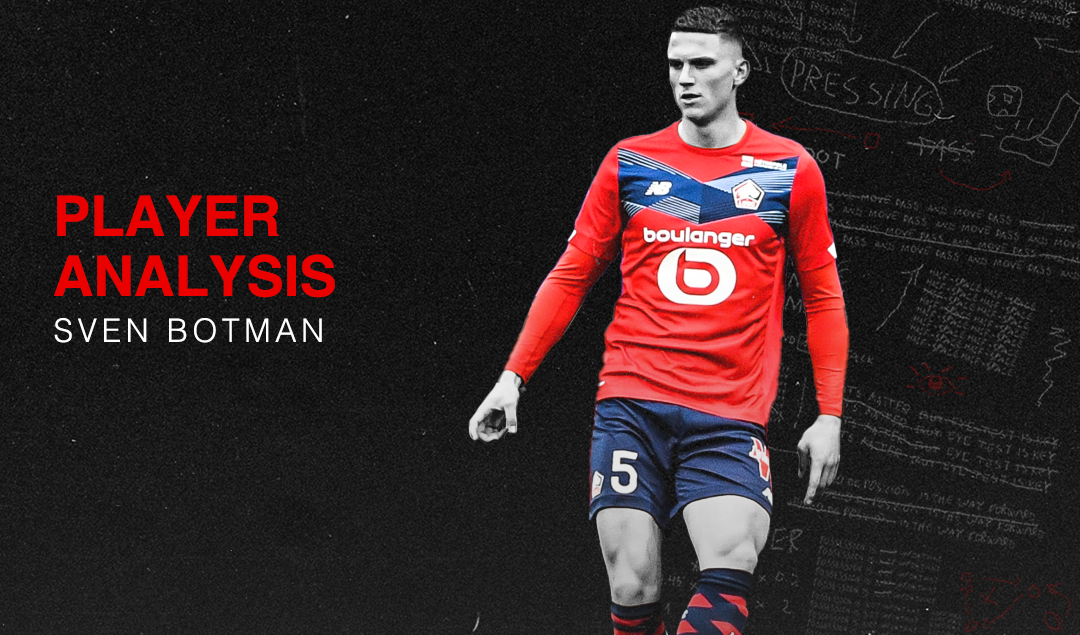 Ligue 1’s recent script has been written all around Paris Saint-Germain’s dominance, with the Parisians winning the past three titles and seven of the past eight, but this year, Lille have torn said script to pieces in their bid to return to the top step of French football for the first time since 2011. With six matches remaining, Les Dogues currently sit three points clear of PSG with 69 points, whilst maintaining a four-point and five-point cushion over Monaco and Lyon, respectively.

One man who has been at the heart of their ascent to first place in the league has been Dutch centre-half Sven Botman, who only arrived at the club from Ajax for £7.2 million last summer. That fee has already proved to be an absolute bargain, and if the club decides to sell at any point, a huge profit will be coming their way. However, before focusing on a potential exit, with Liverpool and more reportedly interested, let’s talk about the incredible 2020/21 season that young Botman is having.

The central defender is still just 21, very young for his position, but has amassed 2,771 minutes in Ligue 1 this campaign, the second-most in the Lille squad, behind only goalkeeper Mike Maignan. To be gaining so much experience in one of Europe’s top five leagues is vital for his development, and in fact, no player under the age of 22 in the Premier League, Serie A, La Liga, Bundesliga or Ligue 1 has managed more minutes this season that Botman; he is a pillar of consistency and this will stand him in such good stead for the future.

Unlike his compatriot Virgil van Dijk, Botman isn’t the smoothest defender blessed with immense acceleration and a calming presence, but he is an excellent 18-yard box defender, who will do anything to prevent the opposition from scoring. Amongst defenders with over 1000 minutes in Ligue 1, he ranks sixth for the most aerial wins per 90, with 3.4, which is 1.1 per 90 more than his central defensive partner Jose Fonte, showing how adept he is in the air.

He would rank fifth in Serie A, fourth in the Bundesliga and third in La Liga using the same metric, and by comparison, Manchester City’s Rúben Dias wins only 2.0 per 90, Real Madrid’s Sergio Ramos wins 2.1 per 90, and Juventus’ Matthijs de Ligt wins 2.4 per 90; Botman exceeds all three, and is truly in Europe’s elite in terms of defensive aerial wins. In fact, across Europe’s top five leagues, only three players under the age of 22 with at least 1000 minutes better Botman’s aerial wins per 90.

To add to his aerial ability, Botman is comfortable in possession, particularly when playing it short, averaging an 85.6% pass accuracy, and his 4.46 progressive passes per 90 is in the top 10% of centre-backs in Europe’s top five leagues according to FBref.com. However, with 5.0 inaccurate long balls per 90, the most of an outfield player in Lille’s squad, and the fifth most of outfielders in the entirety of Ligue 1, Botman sometimes needs to simplify his game to ensure his team are able to keep, and recycle possession.

His positional awareness is exceptional, and he always seems to be in the right place at the right time to sweep away the attempts of the opposition, something that is hard to quantify using statistics. Furthermore, Botman is left-footed, which is a rarity amongst centre-backs, and hence he is extremely valuable. Just like fellow Ligue 1 defender Facundo Medina, Botman’s value will increase simply because he is left-footed, as it’s something that every top club wants.

For example, Manchester United, Tottenham, Liverpool and Chelsea all don’t possess a single left-footed centre-back; Botman would fill such a hole in their respective squads. He has formed an impressive partnership at the heart of Lille’s defence with the aforementioned Fonte, and with just 19 goals conceded in 32 games, Christophe Galtier’s side not only have the best defence in France, but the best in Europe’s top five leagues, with Atlético Madrid second having conceded 20 goals this campaign.

Now, Botman is far from solely responsible for this, but he has been a fundamental and pivotal part of the best backline in Europe, and that shouldn’t be ignored. He is yet to make his senior debut for the Dutch national team, but with his performances so impressive for Lille this season, he has a great shot at making the Netherlands squad for the upcoming European Championships, and if form decides who makes the squad, then he certainly should be on the plane.

Liverpool, Manchester United and Tottenham have all been linked with Botman in recent months, but one thing’s for sure: he won’t come cheap. Having sold Gabriel Magalhães for £27 million to Arsenal last summer, Lille will be looking to land an even bigger profit on the 21-year-old Botman, who could be the next De Toekomst graduate after Daley Blind, Donny van de Beek, and Christian Eriksen to test his skills in the Premier League.

In consecutive seasons, Lille have sold Nicolas Pépé to Arsenal for £72 million, and Victor Osimhen to Napoli for around £63 million, with add-ons potentially rising that figure to close to the Ivorian winger’s price, so they won’t accept a small bid for Botman. Whether they succeed in ending PSG’s dynasty or collapse in the coming weeks, expect to see a big move away from the Stade Pierre-Mauroy for the 6’4″ defender in the not too distant future.