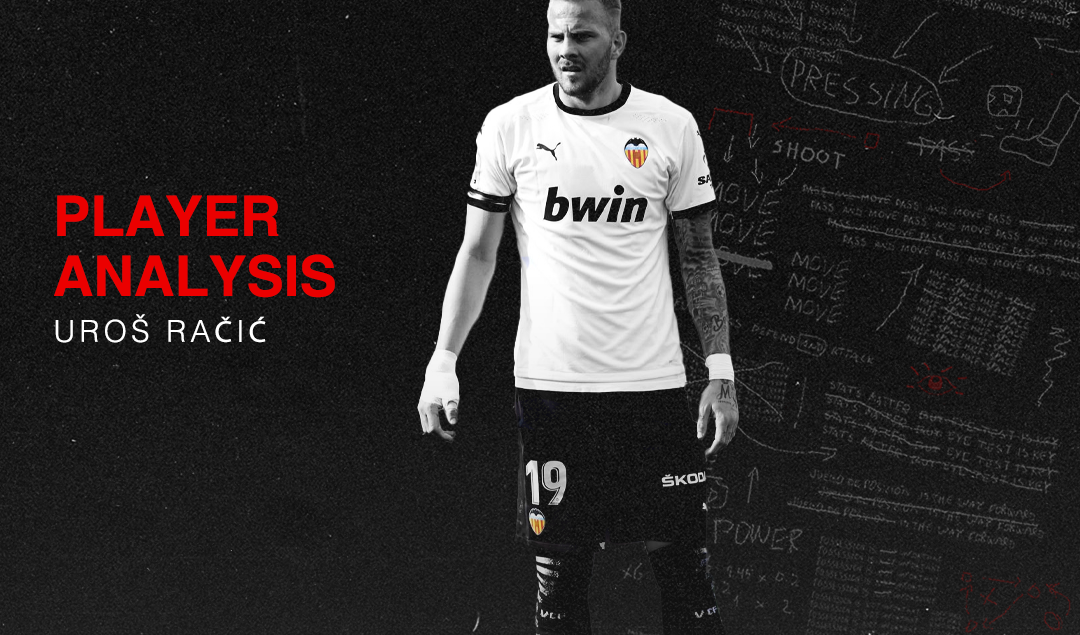 When Valencia announced the signing of Uroš Račić from FK Crvena Zvezda, there were varying reactions from sections of both fanbases. While the Valencia fans tried to be optimistic about the signing, looking for all information they could get regarding this unknown 20-year old, a section of the Crvena Zvezda fanbase on Twitter appeared to be delighted to see him leave.

Some even expressed their surprise that a club like Valencia would be interested in him, as they did not think he had the potential or quality for a club of that level. Admittedly, they did not speak for the entire fanbase but that surely made the Valencia fans wonder if they had indeed signed a player who could do great things for the club.

If there were any doubts regarding Račić’s talent and abilities, the breakout season he has had in 2020/2021 has surely turned a lot of doubters into fans and perhaps surprised those naysayers from his former club. After a period with Valencia B in Spain’s 3rd tier and successful loan spells at Tenerife in Spain’s 2nd tier and Famalicão in the Portuguese first tier, this was the season when Račić really showed that he belonged to this level – a starter at a club with big ambitions in one of Europe’s top 5 leagues.

It is remarkable that he probably wouldn’t have gotten this chance if the exits of Francis Coquelin and Geoffrey Kondogbia did not happen. There was also that bizarre rumour linking him with a surprise move to Manchester United. It wasn’t that he did not possess the talents to be courted by them. It was that the rumour came out of nowhere, and he hadn’t even shown that he could be trusted to be consistent in midfield for an ambitious club in the top 5 leagues.

He was a relatively untested talent at this level so the links sounded barely believable, perhaps engineered by someone who wanted to put pressure on Valencia to give him a chance. Players who go away on loan at Valencia often get sold once their loans are done. For a player like Račić who had been loaned out twice, and who had the terrifying silhouettes of Coquelin and Kondogbia in the path of his first team dream, things looked bleak regardless of what he had done on loan. As they say though, football is a funny old game.

The exodus at Valencia coupled with the club’s unwillingness to sign anybody meant that Račić got his chance, and even then, it did take a while. Manager Javi Gracia, pissed off about broken promises and his failed resignation attempt, took forever to recognise that Račić was the player he needed in the middle of the park.  Players like Daniel Wass and Vicente Esquerdo were tested in the role and got more opportunities, with Račić’s excellent performance in his only start (against Huesca) during the first 8 games completely ignored.

Even the fans could see that he was the perfect fit based on what he showed with his limited minutes but Gracia continued to ignore him. It took until the 9th gameweek for him to finally get another chance, and it was because Gracia had no choice here. Esquerdo had shown that he was not ready for the baptism of fire at this level and Daniel Wass had to fill in at right back with Thierry Correia suspended. It was a game against Real Madrid.

Not many players can say that they got their breakthrough in a game against Real Madrid. Račić absolutely can, though. Playing alongside Carlos Soler, he was up against Luka Modric, Isco and Federico Valverde. It wasn’t always easy, and for the first half-hour, Real Madrid seemed too much for Valencia. But slowly, he grew into the game and did the job he had been sent in to do.

He was everywhere, a 1.93m menace in the middle. As Valencia raced to a 4-1 victory courtesy of three penalties, Račić played his ‘disrupt’ role brilliantly, ensuring that Gracia would be forced to think twice before ever benching him again. He started the next 5 league games, including games against Atlético Madrid and FC Barcelona, playing all 90 minutes every time. This was the beginning of his true breakout season.

Račić’s greatest strength is his ability to always be at the right place to break up an attack or get into a duel. He has a combative albeit calm thing about him, where he does the dirty work in an almost demure way. If he wasn’t so physically imposing due to his height, one might have been deceived about the enormity of work he does for the team.

His touch, while not Zidane-esque or close, is still quite pleasing to the eyes, especially when he lines up a long pass. It sometimes feels like he floats around the pitch and he has what many would call a proper football frame. He has the right mix of balance and agility and does not have legs that hinder him. Everything else flows from there. He gets around pretty easily and sweeps up everything around him. His distribution is quite good too.

Over the season, Račić has improved his decision-making and shown more evidence that he is more of a box-to-box midfielder than a holding one. However, to really reach his potential, he still has some flaws to fix. His passing is still not there yet, as was evident during his two loan spells. That said, it must be noted that his line-breaking ability has improved tremendously as the season has progressed. He also has a positioning problem when his team has the ball.

It is a bit of an irony that his reading of the game and positioning when the opponents have the ball is brilliant while it is poor when his own team have the ball. He seems to always hinder the build-up with his poor positioning and struggles with understanding where to be. That said, this is an issue that proper coaching can fix. It’s a surprise that Javi Gracia could not spot it. Sometimes, it feels like Račić forgets he plays in midfield 2 and not a 3-man midfield. That may be the foundation of this particular flaw in his game.

Next season presents an opportunity for Uroš Račić to consolidate on the strides made this season and sort out the flaws still in his game. It will be interesting to see how he gets on with new manager Bordalas, who did major work on former Valencia midfielder, Nemanja Maksimović, coincidentally Račić’s direct rival for a national team spot. While there is so much more that Račić has to do to reach his potential, he has done excellently for himself so far.

A lot will depend on the coaching and guidance he receives in the coming years. With a national team cap already under his belt, he also looks set to be a regular for his country. It remains to be seen what heights he could yet reach. Right now though, the future certainly looks bright for the 23-year old whose biggest fan remains his twin brother, defender Bogdan.