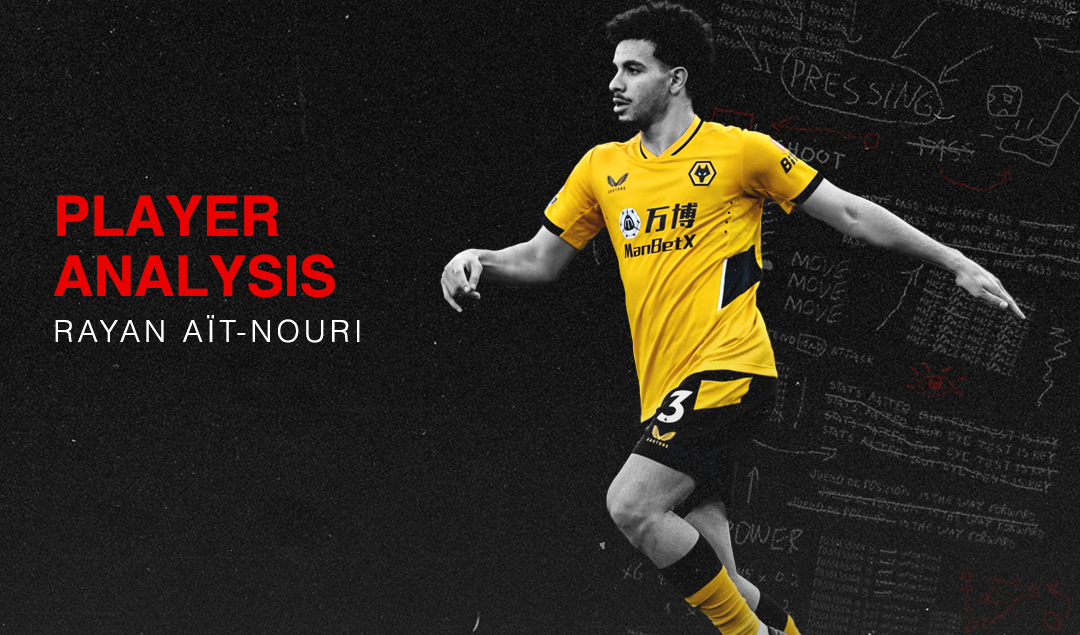 Despite their struggles in front of goal, it’s been a largely positive start for the new-look Wolves side under Bruno Lage. Only Manchester City, Liverpool and Chelsea have conceded less goals than the Wanderers. New signings Hwang Hee-chan and Jose Sa have gained plaudits for their performances, whilst Raul Jimenez is slowly but surely getting back up to speed.

One player perhaps going under the radar is 20-year-old Rayan Ait-Nouri. The young Frenchman has put in several impressive displays over the past couple of months, showcasing his eager dribbling ability and promising creative fundamentals. Lage will be hoping the injury he sustained during the Liverpool match won’t keep him out for long. 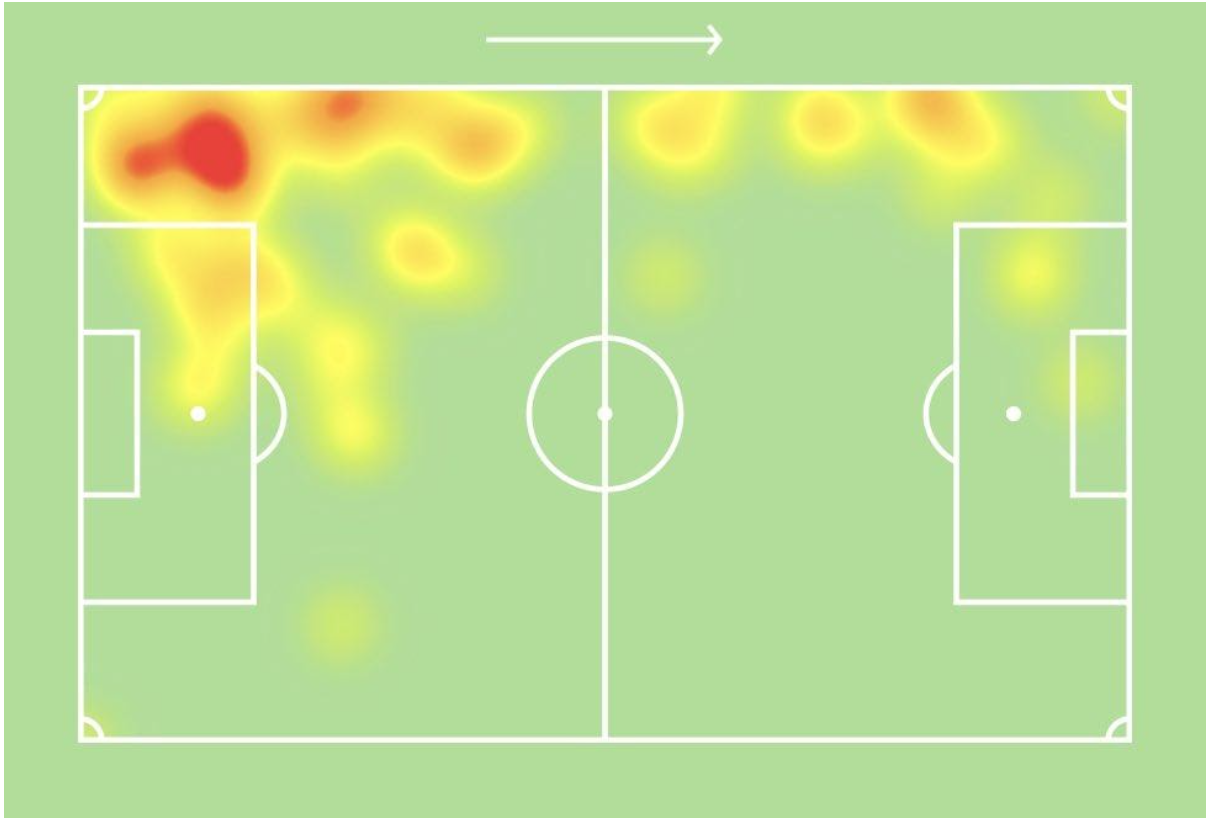 Ait-Nouri had to be patient for his first start under the new boss, with Marcal being the first choice for left wing-back until the latter got injured. He started against Leeds in October and viewed it as an opportunity to make the position his own – and that he did, having not been displaced since and making 7 consecutive starts.

After a relatively successful loan spell last season, Wolves decided to make the plunge for a permanent deal for Ait-Nouri in the summer. He was signed for £10 million from French club Angers SCO, who have also produced the exciting Mohamed-Ali Cho in recent times. Yet, whilst Ait-Nouri’s admittedly still raw, he’s looking more like a bargain every week with his performances.

Although the Frenchman’s style is primarily offensive, he has been a part of solid defensive work from Wolves this season. In his most recent game, against arguably the best player in the world right now in Mo Salah, he won 11 out of 12 duels as well as completing 8 tackles.

It was only after he limped off injured that Salah was able to get away and provide the assist for the dramatic winning goal. At the time of writing, he’s averaging more tackles per 90 than any other left-back in the Premier League (4.4). Furthermore, Wolves have only conceded 3 goals with Ait Nouri on the pitch this season, implying the positive impact he has on his team.

It’s worth noting that the 20-year-old has previously played both left back and left midfield, but the wing-back role seems to suit him to the ground. He’s able to use his flair and quickness to beat defenders and create a goalscoring opportunity with a cross.

In terms of Premier League left backs, only Norwich City’s Dimitris Giannoulis is attempting more dribbles per 90. It’s fair to say this is the trait that initially caught the eye of Europe’s elite, bringing a plethora of dynamism down his team’s left flank. His dribble success rate is only about 54% though, so there’s certainly room to improve in terms of deciding when to dribble.

Despite this, the bravery and eagerness are there, which his manager is bound to be happy with. When compared to other players in his position across Europe’s top 5 leagues, his figures for dribbles completed rank in the 97th percentile, whilst also yielding impressive numbers for progressive carries, ranking him in the 87th percentile. 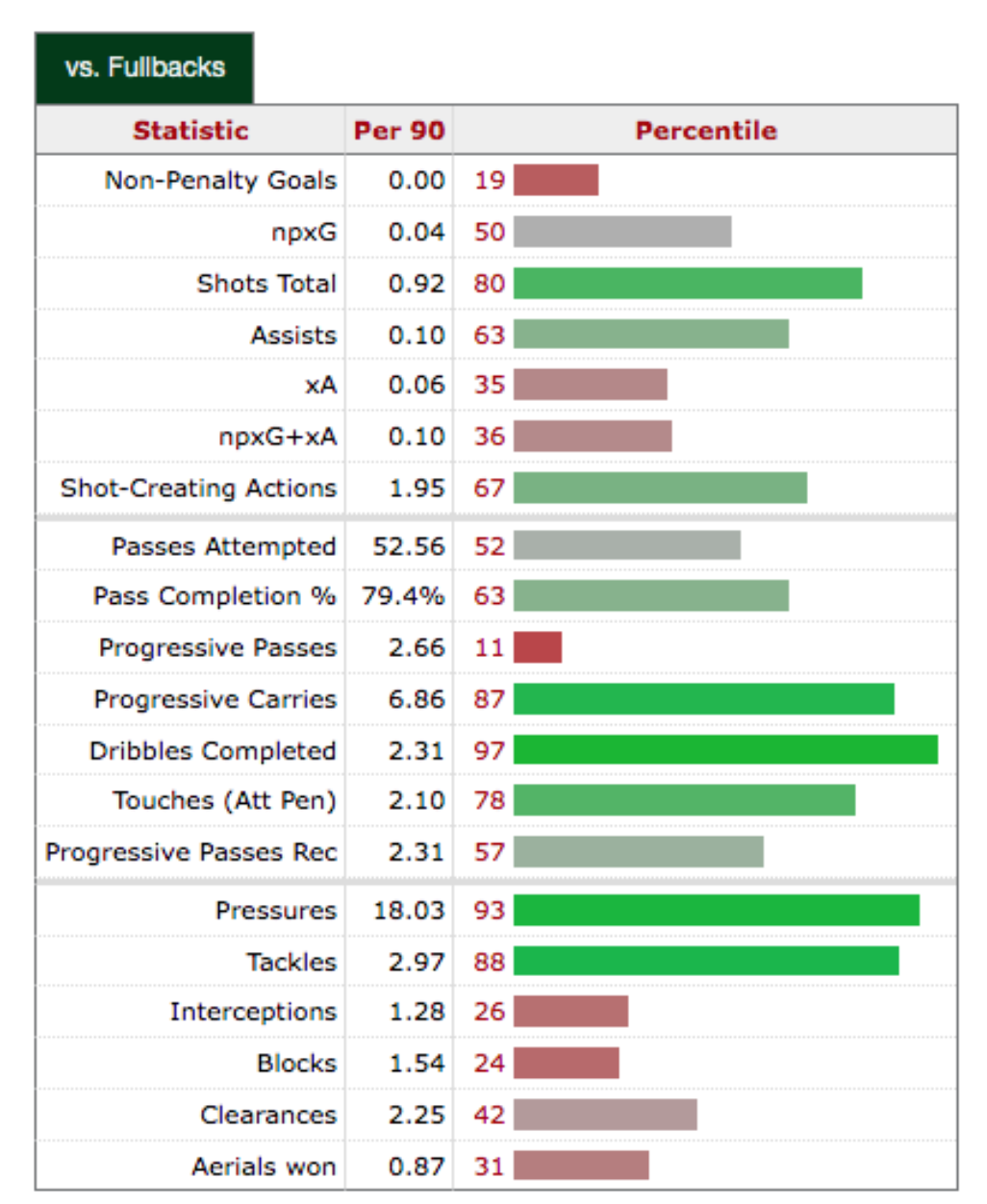 Ait-Nouri’s statistics per 90 minutes compared to positional peers in Men’s Big 5 Leagues and European Competition over the last 365 days. Based on 1757 minutes played (FBRef).

Ait-Nouri clearly likes to be heavily involved in games and works hard for his team. This is highlighted by his numbers for touches and pressures, which rank in the 78th and 93rd percentile, respectively. Lage instructs his wingbacks to press high and has likely been impressed with Ait-Nouri’s work ethic in that regard.

Additionally, the youngster doesn’t shy away from having a shot on goal, averaging 0.9 shots per 90 minutes, according to FBRef. His positional discipline allows him plenty of space at the far end of the penalty area, allowing him to sneak into the box and get a strike away. He’ll be looking to turn some of these shots into goals to add to the one he bagged last season whilst on loan.

Overall, Rayan Ait-Nouri remains an exciting young prospect and certainly one to keep an eye on for the biggest clubs in Europe. He’s brimming with energy and is confident enough to back himself in beating any defender in the world.

His combination play is good, with him being comfortable making both overlapping and underlapping runs to harm the opposition. It’s promising to see he’s improving his defensive output on last season, but his decision-making in terms of when to dribble and cross remains a slight weakness – which is natural given his age and inexperience.

His former club Angers will be keen to see if his future lies elsewhere, with the club retaining a healthy 50% of the fee for a future sale of the player. For now, with competition ripe at international level with the likes of Theo Hernandez and Lucas Digne vying for the left back spot, Ait-Nouri will be looking to add to his 3 France U21s caps for now, as well as aiming to push for the European places with Wolves.