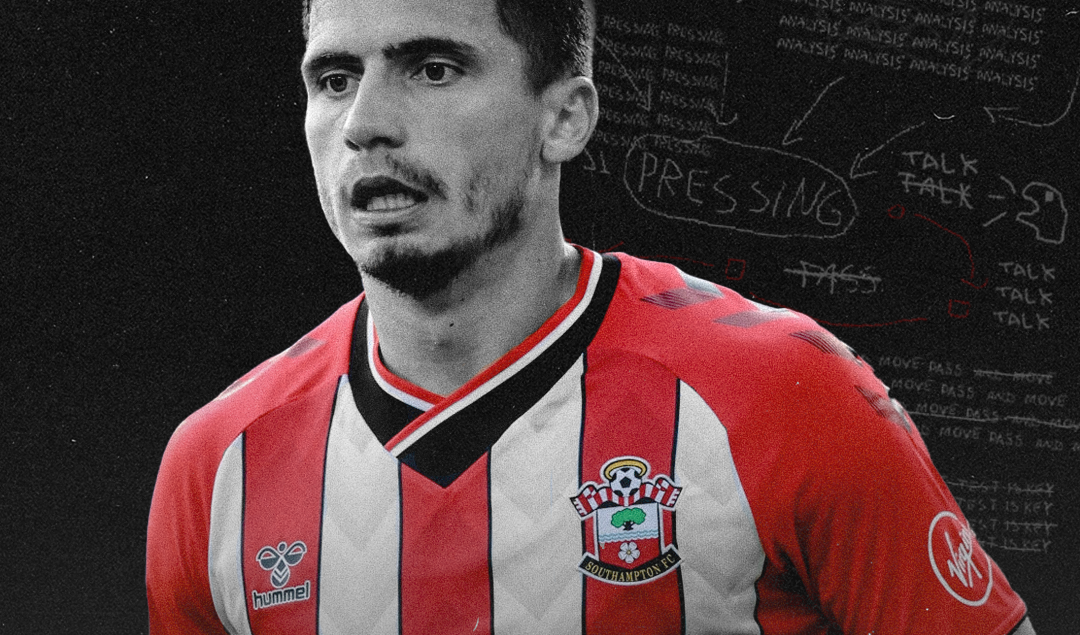 At 23 years of age, Romain Perraud emerged as one of the top-scoring left backs in Ligue 1 for Oliver Dall’Oglio’s Brest with 3 goals and 7 assists in 36 appearances in the 2020/21 season.

This earned him a €13 million move to Southampton in the summer, and whilst he has often rode the bench in his inaugural season in English football, Perraud has started and played the full 90 in each of Southampton’s last three matches – a 4-1 win over Brentford, a 3-1 defeat to Wolves, and a 1-1 draw against Manchester City, the second time Saints had held the reigning champions to just a point after drawing 0-0 at the Etihad in September.

Born in Toulouse, Perraud bounced around provincial sides Blagnac FC, Toulouse Fontaines Club and US Colomiers before joining OGC Nice’s youth academy in 2014. Whilst he made his first-team debut under Lucien Favre on December 8, 2016 in a Europa League match against Krasnodar, he would have to wait over a year to make his maiden Ligue 1 appearance, coming on as a late substitute in a 1-0 victory against Saint-Étienne.

Seven months after his top-flight debut, Perraud joined Paris FC on loan for the 2018/19 season. He delivered a phenomenal campaign in the capital city, providing 5 goals and 1 assist in 34 appearances and leading them to the promotion play-offs, where they would lose to Lens in the quarterfinals following Perraud’s costly miss in the penalty shootout.

Lens would go on to defeat Troyes before losing to Dijon in the promotion/relegation final, but they were given a reprieve due to the COVID-19 pandemic; France was the only nation in Europe’s top five leagues to put their entire season on shelves, which meant that Lens, who had taken 53 points from 28 matchdays, and Lorient, who had taken 54, were automatically promoted.

Both of the sides were able to avoid the nerve-wracking drama at stake in the playoffs, whilst Ajaccio (52), Troyes (51) and Clermont Foot (50) were held back in the second division with heartbreak and disbelief. Clermont and Troyes achieved promotion to the top-flight last season, whilst Ajaccio finished 13th in Ligue 2 — they currently sit 3rd in Ligue 2 whilst Paris FC are one point away from league leaders Toulouse.

Perraud’s performances at the Stade Charléty led France Football to vote him as Ligue 2 Player of the Year, but when he returned to the French Riviera, he found himself stuck behind Malang Sarr and Racine Coly in manager Patrick Vieira’s pecking order.

Instead of waiting around for a chance in the Côte d’Azur, Perraud joined newly promoted side Brest for €2 million, but he registered just 1 assist in 24 appearances as Les Pirates finished 14th in the truncated season.

Unlike the vast majority of mid-table sides in Ligue 1, Olivier Dall’Oglio’s Brest side sought to break teams down in possession rather than on the counter-attack. They attempted to attract pressure in the first phase of build-up play, before progressing the play with positional rotations and attacking through the flanks.

Perraud’s usefulness in this system was one of the things that caught Ralph Hasenhüttl’s eye, a coach who, like Dall’Oglio (now at Montpellier) attempts to break down the opposition with aggressive pressing and a strict discipline in possession.

It’s why, after weeks of negotiation, Perraud joined Southampton on a four-year contract, becoming their latest French player after Morgan Schneiderlin, Yan Valery, and Ibrahima Diallo.

He started Southampton’s opening match of the season, going up against Rafa Benítez’s Everton and taking the lead early on via Adam Armstrong, another summer arrival who had joined from Championship side Blackburn Rovers. However, it was Benítez who had the last laugh as second-half goals from Abdoulaye Doucouré, Richarlison and Dominic Calvert-Lewin gave the Toffees a victory.

Perraud, meanwhile, was substituted out in the 83rd minute to Nathan Redmond after a torrid spell against the likes of Richarlison, Calvert-Lewin, Andros Townsend and Demarai Gray, a real baptism of fire in England’s top flight. Nevertheless, it didn’t stop Perraud from starting in the following match, a 1-1 draw against Manchester United.

He was once again substituted out in the second half by Hasenhüttl, coming off in the 79th minute to Kye Walker-Peters. The following match saw Walker-Peters relegate him to the bench for the first time all the season, a 2-2 draw to Newcastle United, with Valentino Livramento — a new summer signing from Chelsea – occupying the right back spot.

So far this season, Perraud has been picked up a total of 13 appearances this season for Saints — 12 of which were starts.

In contrast, he has been an unused substitute in 13 matches thus far — a perfect mathematical balance and another reason why, despite having tricky competition from the likes of Livramento, Walker-Peters and Thierry Small, Perraud has made steady progress in the South Coast thus far.

After watching their Boxing Day fixture from the bench, a 3-2 win away at West Ham, Perraud played the full 90 in the following match as Southampton managed to escape with a point against Antonio Conte’s Tottenham despite Mohammed Salisu’s expulsion before halftime, and he was given another start as Southampton defeated Swansea City 3-2 on penalties in the FA Cup on January 8.

Perraud returned to the starting line-up, only this time, in a new position, three days later. Rather than playing the left back position he had grown accustomed to, Perraud operated as a left wing-back, charging forward and threading through balls into the strikers Redmond and Chelsea loanee Armando Broja. It was to great effect, as Saints went on to defeat Brentford 4-1.

He continued in this wingback position, one that he had thrived at during his time at Brest, for the following match, a 3-1 defeat to Wolves at Molineux, but he nevertheless maintained the starting spot only this time in a back four, as Southampton pulled off a stunning 1-1 draw against City.

“He’s had a really solid start. He’s not been spectacular, as such, but he’s hardly put a foot wrong – seems a very dependable, consistent player, and one who never worries you when he’s on or off the ball. It’d be good to see a bit more from him going forward sometimes, but he’s really assertive and intense when wingers receive the ball, which is good”-Luke Osman, a Southampton-focused journalist.

After a free-scoring campaign at Oliver Dall’Oglio’s Brest, Romain Perraud is now adapting to a new style of football in the Premier League with Ralph Hasenhüttl’s Southampton. A team that, having taken points off the likes of Manchester City, Tottenham and West Ham in recent weeks, looks set for another quiet midtable finish rather a nerve-wracking relegation fight.

Whilst the 24-year-old has failed to score or provide an assist in his 13 appearances thus far, he is becoming an increasingly important part of a backline that, with Livramento (19), Walker-Peters (24) and Salisu (22), is teeming with young defenders that could be set to mark a new era at Saint Mary’s Stadium.