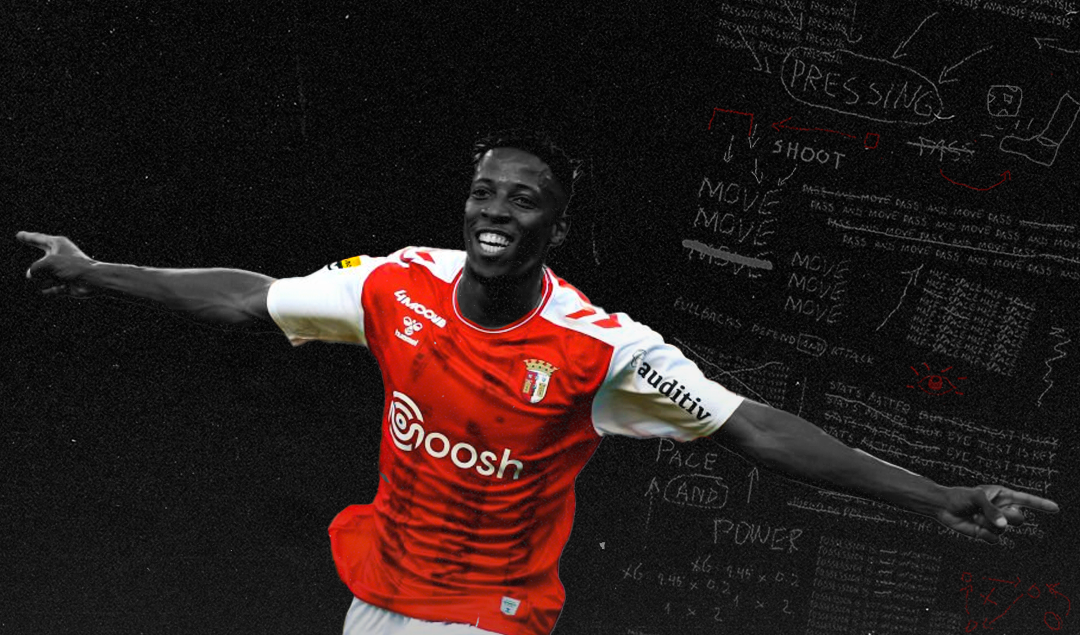 At this premature stage of the 2022/23 Liga BWIN campaign, it would not be controversial to crown Simon Banza as one of the signings of the season and a real coup for SC Braga. Transfermarkt valued the French talisman at 5 million euros as of May 2022, however, he joined Braga for merely 3 million after a fantastic season at fellow Portuguese league side Famalicao.

Braga president Antonio Salvador is a shrewd businessman, and after the departure of experienced manager Carlos Carvalhal, the focus seems to be on rebuilding using the underrated and ever-improving youth academy accompanying shrewd investments – the greatest example being a player like Paulinho leaving for Sporting for 16 million euros, eventually being substituted by the options of La Masia product and Spanish U21 international Abel Ruiz, hot prospect Vitinha, and now Simon Banza.

After departing Lens on the summer 2021 deadline day and joining Famalicao on loan, Banza scored 14 goals in 29 Primeira appearances before moving to Braga on a permanent deal. The 26-year-old offers a daunting physical presence and immediate goal threat through the middle not seen for some time at Braga, and with 5 goals and 1 assist in his first 6 matches, he currently sits one goal clear atop the Primeira’s scoring charts.

The previous 2021/22 season was seen to be somewhat disappointing, failing to compete with a disappointing and disjointed Benfica side for 3rd place until the end, however, Braga have been unarguably the most impressive side at the start of this campaign, scoring a chart-topping 21 goals in 4 matches, and playing some fluid, exciting football under former Braga player and youth coach Artur Jorge – forcing Braga into first place and initially breaking the mold of ‘Os Tres Grandes’ or the ‘Big 3’, dominating in Portuguese football.

Diogo Costa: The Present and Future of Portugal’s Goalkeeper Position

During some dominating performances, Banza found 5 goals in 4 games including an opener against Sporting, a brace away at his former club Famalicao, a neat finish in a convincing victory against a transitioning CS Maritimo side, and ina 6-0 thrashing of Arouca, Banza struck again – 4 consecutive games, with Banza on the scoresheet. The top goalscorer in Liga BWIN, despite being at the club for little over a month with little time to adapt.

This domination has come with time, however, as Simon Banza has taken time to blossom as a consistent goalscorer. Banza started his professional career at Lens after youth spells equally at US Chantilly and Liévin, first for the Lens reserve side, before moving onto the first team where a freak injury stunted his development, with the Creil native’s most regular spell in the Lens first team, resulting in 7 goals in a promotion-winning season.

Along the way, Banza would strike 13 times in 21 fixtures while on loan at Luxembourg side UT Petange, but the peak of his career so far would certainly be a loan spell at Famalicao.  The side from Vila Nova de Famalicão often suffer from slow starts due to a high level of turnover amongst the playing staff, and for that reason are easily one of the most exciting and intriguing clubs in Portugal.

Despite sitting in 17th until the 21st gameweek, Famalicao finished in 8th, rising four places on the final day of the season – on the way, Banza contributed to 18 goals in 33 matches – establishing himself as one of the most lethal direct goal threats in Portugal.

Banza is one of the most difficult strikers to defend in Portugal due to his tall frame, movement, and strength – he always looks to target opposition defenders and wreak havoc – and despite his 6ft2 frame, he is surprisingly mobile in his style of play, acting often as a brilliant facilitator.

The Frenchman born to DR Congolese parents is supreme in the air, constantly amongst the elite in aerial duels won – offering himself often as an effective outlet to receive and distribute. To demonstrate this, a statistic to make note of is that Banza averaged 8 progressive passes received per 90 while at Lens, a side below the standard of Europa League regulars Braga, while Banza’s game itself has improved by leaps and bounds.

Simon is not the most aggressive presser, nor is he the workaholic of this reformulated Artur Jorge Braga side with Abel Ruiz or Vitinha taking up those roles effectively, but Banza shows his intelligence in his positioning while defending from the front – being in superior percentages for successful presses, blocks and tackles.

Since his arrival in Portugal, Banza has constantly demonstrated that despite being a natural target man, he can work well in a mobile attack with intelligent movement and positioning to benefit himself or opening spaces for the likes of Ricardo Horta, while gaining a reputation as a cold finisher and an attacker that defenders struggle to stop, always in danger areas, with great finishing ability.

Despite these qualities to strike fear to any opposition in Portugal, Banza needs to improve his passing as he is unable to deviate from basic layoffs with a high percentage of efficiency. With a poor dribbling ability, and awkward ball control at times, Simon Banza could also be more refined in his technical ability, but if used right, we could be looking at a challenger for the 22/23 ‘Bola de Prata’, and a forward to help push Braga towards their high ambitions.