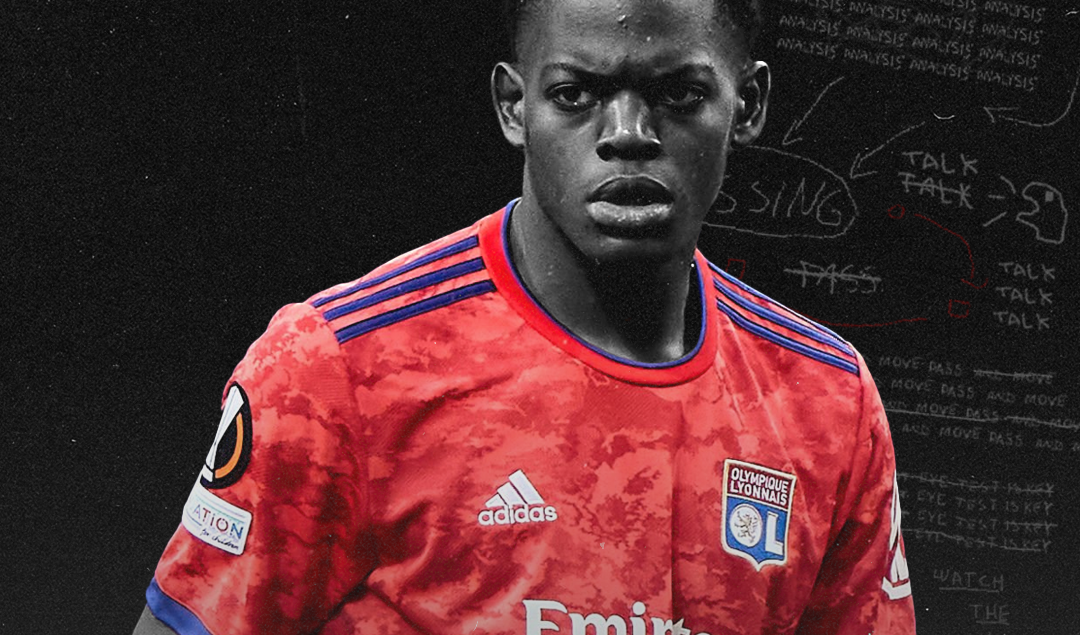 The Olympique Lyonnais academy is famed for bringing through talents such as Karim Benzema, Clement Grenier, Nabil Fekir, Houssem Aouar and Hatem Ben Arfa. The latest talent to break through is young centre back Castello Lukeba. The 19-year-old made the step up to the first team after long-term injuries forced manager Peter Bosz to turn to the youth setup.

The young defender has taken his opportunity and put in such good performances; he was nominated for the Ligue 1 Young Player of the Year award. Lukeba has become a key part of Lyon’s defence possessing individual qualities that make him a terrific ball-playing defender. Let’s take a look at how Lukeba shapes up with other center backs in Europe’s top five leagues in terms of his 2021/22 statistical rankings. 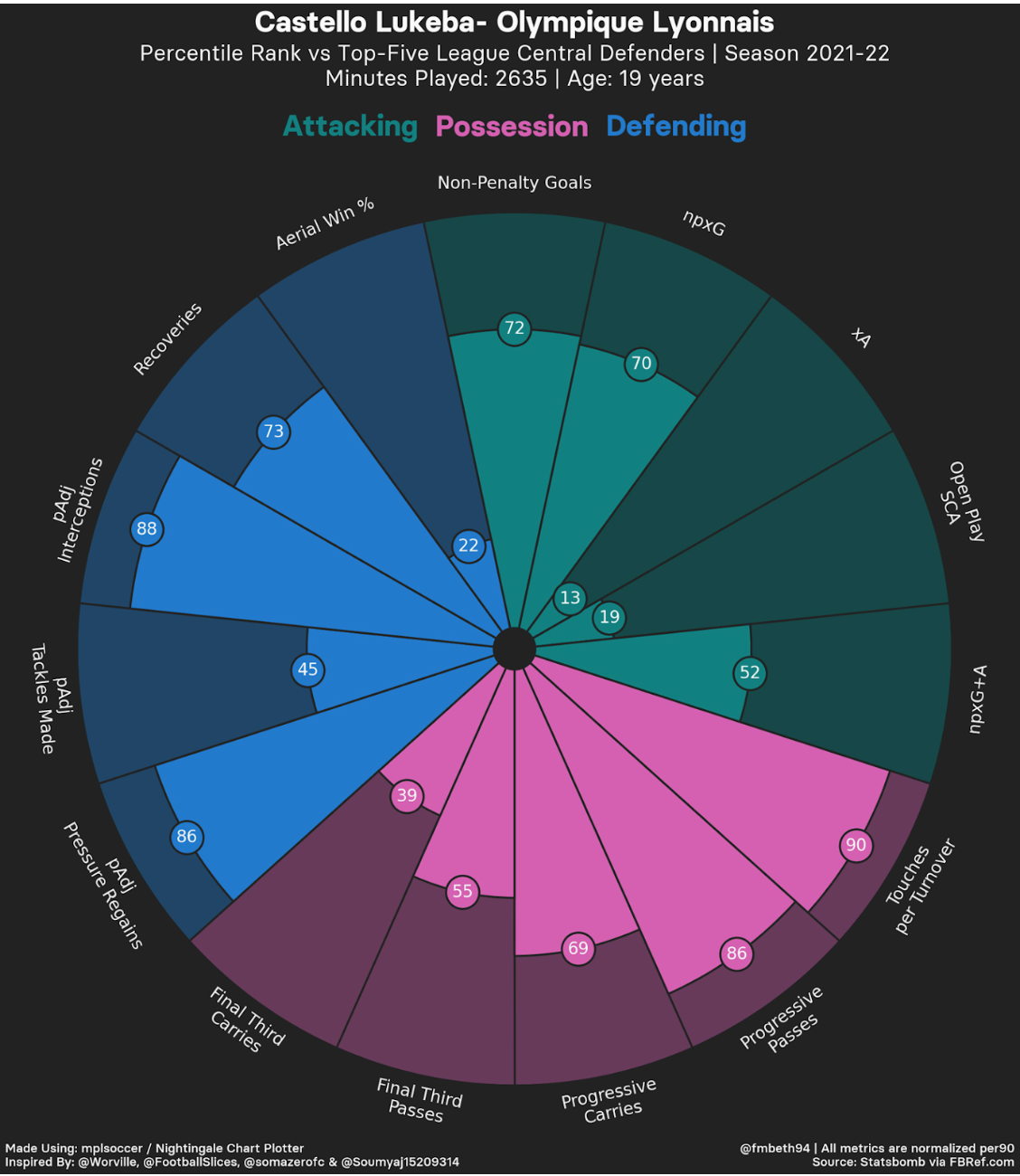 At 19 years old Lukeba is already a well-rounded player. He is very comfortable on the ball and able to make progressive passes which advances Lyon into their attacking phase of play.

He is adept when carrying the ball which is a key aspect of the modern centre back while of course continuing a high defensive ability. Lukeba has been at the heart of Les Gones defence this season, the stats show he has been performing incredibly well compared to fellow T5 league centre backs.

Where is Lukeba Most Effective? 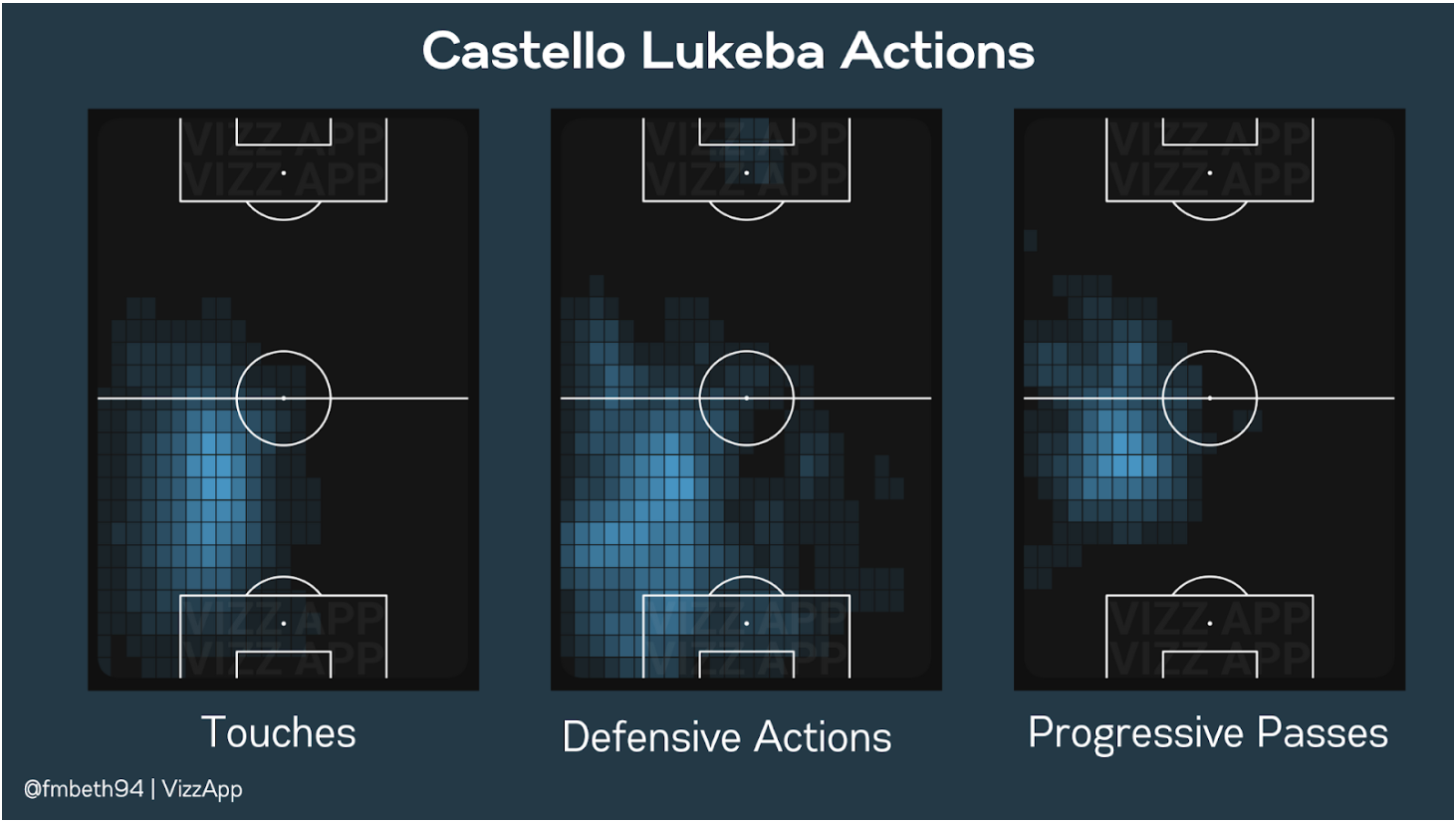 Lukeba’s heat maps show that unsurprisingly the majority of his touches on the ball take place on the left side of the pitch. He is very happy to operate in the half spaces and can be considered a proactive defender as he makes 5.15 interceptions per 90 which demonstrates his ability to read the game and thwart opposition attacks.

He is a much more aggressive defender than his fellow Lyon centre backs. For the most part this is very effective as he has won 71.9% of his defensive duels this season and has been successful in 57% of his tackles.

However, Lukeba’s aggressiveness and desire to win the ball back early can sometimes lead to errors where he steps in too early and is beaten by his opponent which leaves him in no man’s land. These errors can be costly and while he is still a young player it is vital that this naivety is eventually removed from his game if he wants to go on to become one of the world’s best. 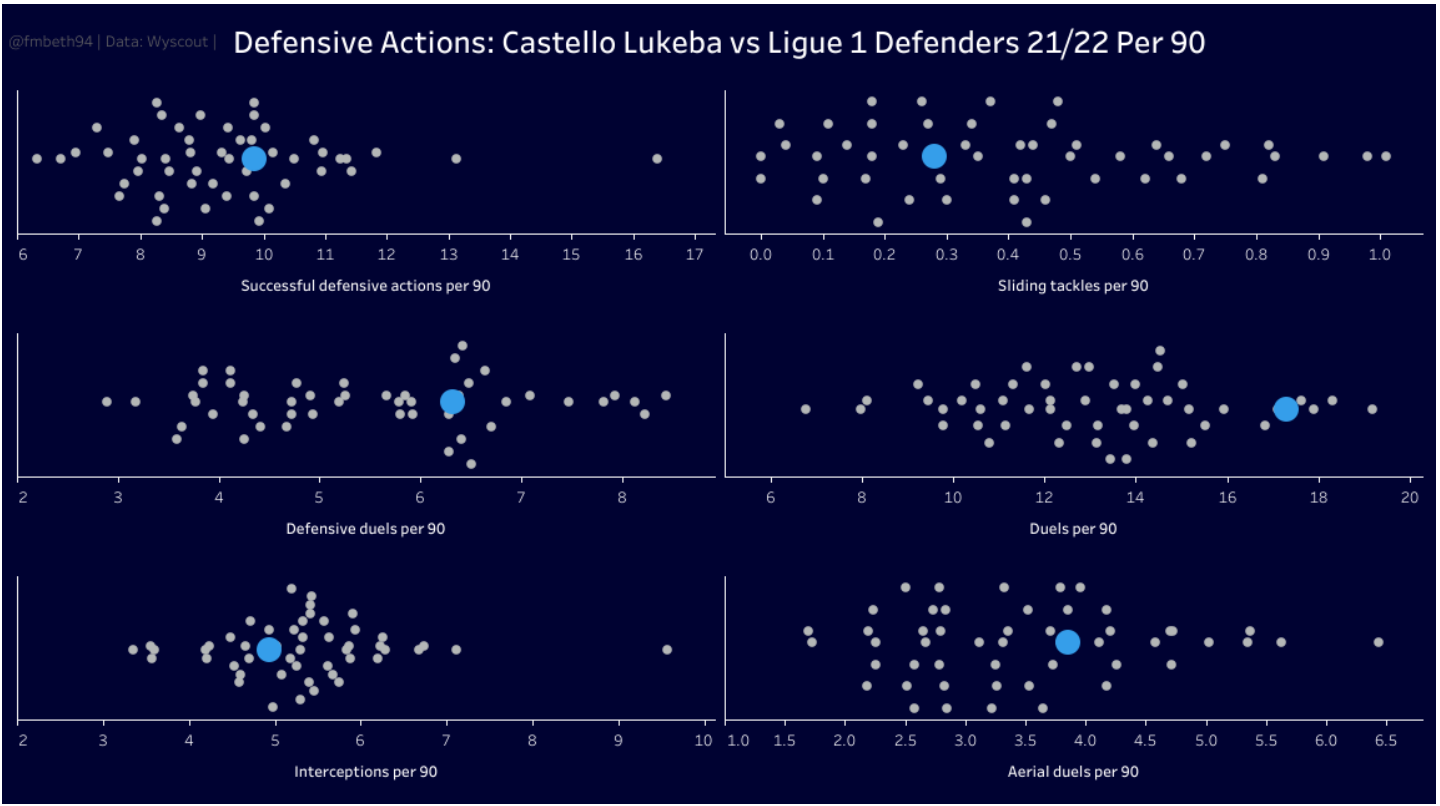 The OL number 4 is exceedingly self-assured in his own defensive abilities, as mentioned above his ability to read the game well allows him to be successful in his defensive actions. He rarely goes to ground, preferring to use his physical presence and intelligence to ensure he is in the right place at the right time.

Lukeba possesses a good amount of pace and is able to remain calm and composed which means he is able to defend 1v1 situations very well. This also means he can act as a sweeper when required which provides great defensive stability for Lyon, knowing that Lukeba can be relied upon to cover the defensive line.

This ability and willingness to recover demonstrates his great work ethic for the team and allows Lyon’s left back (this season it has been Emerson mostly) to maraud forward and join in the attack.

If there is an area of his game where Castello Lukeba could do with improvement, it would be his aerial ability. At 184cm he is not small in height however his jumping reach could do with some improvement as he is often beaten in the air by smaller forwards.

Lukeba wins around 51% of his aerial duels which is not a bad statistic but for a central defender, it could be better, for example his defensive partner Jerome Boateng has a 69%-win rate of his aerial duels.  His weakness in the air often makes him a target for opponents who chose to play long balls forward as they have a good chance of winning the aerial battle.

Maxence Caqueret – The Heart of a Lyon

The Lyon native of Angolan descent does not a great ability when timing his jump which creates issues as he is often too late, meaning the opposition player is already mid-air and able to knock the ball down to a teammate before Lukeba has left the ground.

Whilst this element of his game requires significant improvement, it is important to remember that Lukeba is still only 19 years old and has plenty of time to not improve both his authority and ability in the air.

As a left-footed defender, the Lyon native is a highly valued player by Peter Bosz as he like his team to play out from the back and to press higher up, requiring the defence to be both calm and composed in possession but also prepared to be progressive with it. 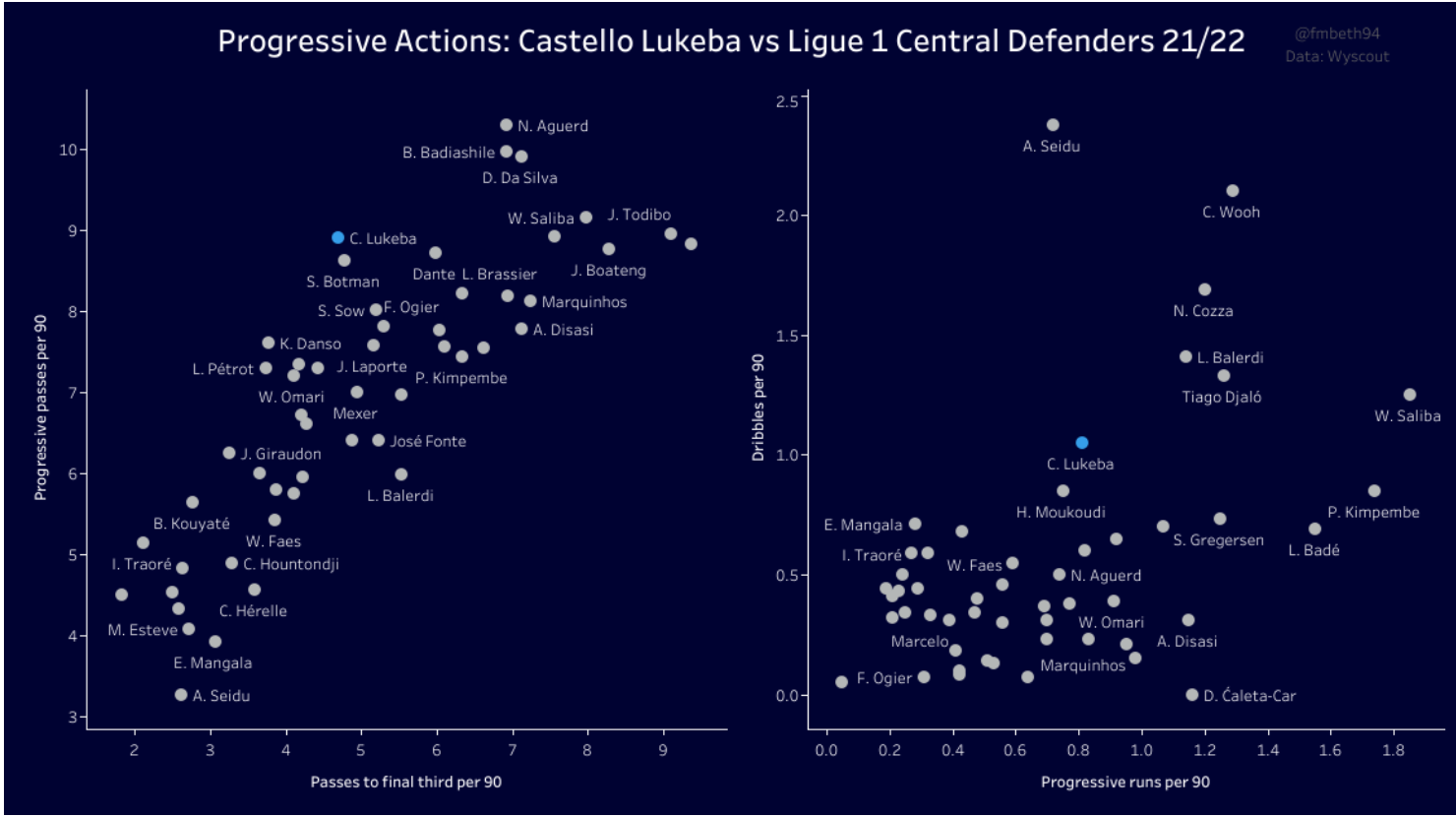 Lukeba averages 4.66 passes to the final third per game, this is a clear indication of how he fits the mould of the modern ball-playing centre back. This is supported by his phenomenal 91% pass accuracy, demonstrating not only his willingness to be progressive but his ability to actually do so.

He plays approximately 65 passes per game, which exhibits his immeasurable confidence on the ball. Lukeba displays great maturity in his passing game, he plays with his head up and frequently looks to play progressive passes into the midfield or the final third. 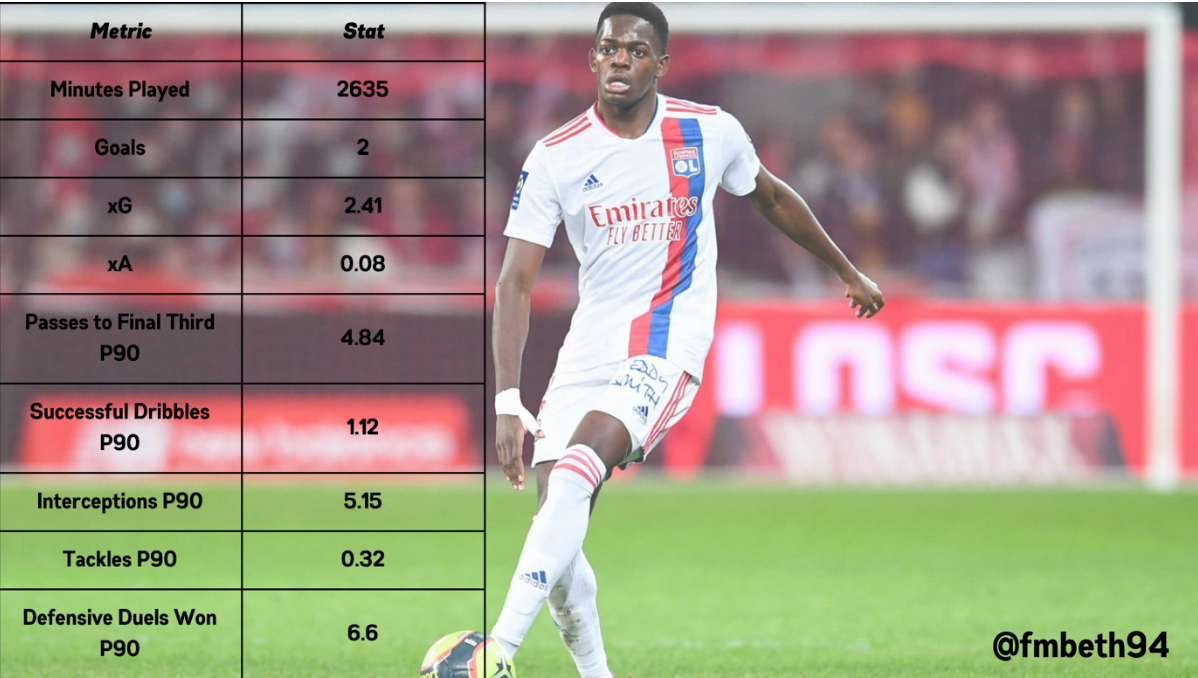 Castello Lukeba has the world at his feet, at 19 years old he is proving to be one of the best central defenders in Ligue 1. He is a very promising young player with great technical abilities. He displays great composure and awareness when on the ball and is willing and able to make progressive passes and astute observations which benefit his team in attack.

Of course, there are areas he needs to improve, as highlighted his aerial ability is not quite up to scratch. This is not uncommon in players so young, Lukeba has time to learn and improve to erase such errors from his game.

Whilst the 2021/22 season has been a fairly disappointing and at times unpredictable one for Lyon, Peter Bosz has placed great faith in the young central defender and Lukeba has taken his opportunity. His performances meant he was often the first name on the team sheet.

Castello Lukeba is one to watch and will undoubtedly go on to achieve great things. After Karim Benzema, Nabil Fekir, Alexandre Lacazette and many more, he is the latest wonderkid to graduate from the Les Gones academy.