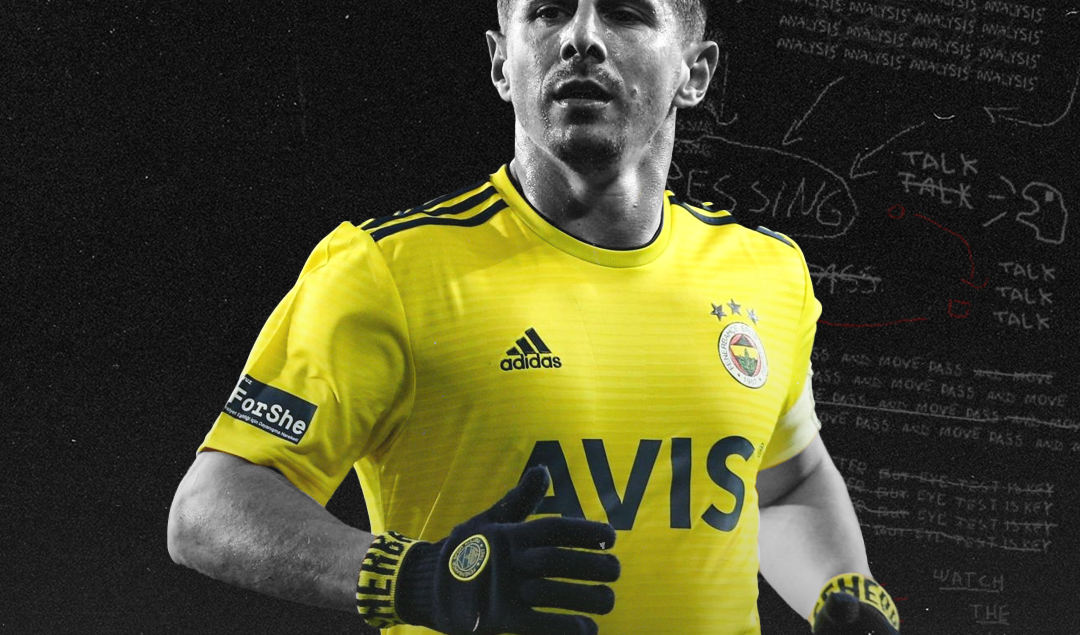 The unveiling of the FIFA 100 on 4 March 2004 was always going to generate an enormous amount of discussion. As part of the organisation’s centenary celebrations, FIFA had called upon Pelé to pick what he regarded as the one hundred greatest living footballers. The criteria were fifty active and fifty retired, although the latter was expanded to 75 after the Brazilian deemed it too difficult to choose.

At the end of the 2019/20 season, only four percent of this group were still active. Two players; two extremely different careers. One is celebrated as one of the best his country has ever produced. A true icon both in his position and at one of the world’s elite clubs. Arise, Gianluigi Buffon. The other is a player renowned for his poor discipline and tainted by the stench of racism. He is Emre Belözoğlu.

Emre burst onto the scene with Galatasaray in 1997, debuting at just 16 in an end of season game against Ankaragücü. The following year he cemented himself in the starting eleven. Despite being under the legal age to drive a car, Emre helped steer Galatasaray towards their twelfth 1. Lig title in 1997/98. Learning alongside the likes of Gheorghe Hagi, Emre seemed destined to have a fruitful career.

In what is widely considered Galatasaray’s best ever team he won two further league titles, alongside two Türkiye Kupası. Emre also helped the team reach the 2000 UEFA Cup final, although missed the win over Arsenal having been harshly sent off in the second leg of the semi-final against Leeds for a tackle on Lee Bowyer. He would return for the following season’s UEFA Super Cup, playing the full 103 minutes in a 2-1 defeat of Real Madrid. 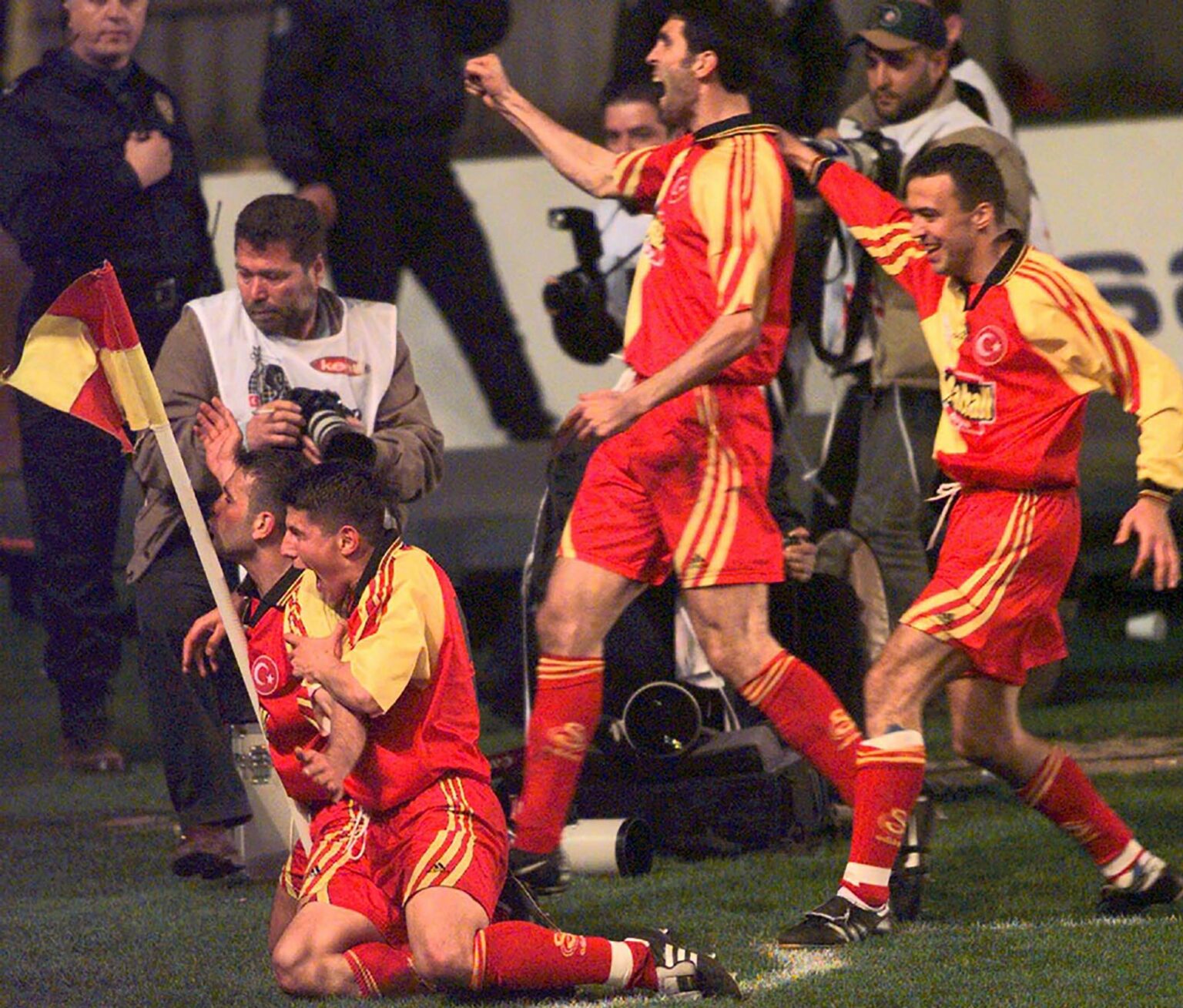 Make no mistake about it, Emre was capable of performing at the highest level. A tremendously versatile midfielder combining excellent passing range and tactical nous with physical strength and a no-nonsense approach to tackling, it was only a matter of time before he left Turkey behind.

After another impressive season in 2000/01, Emre was bought for £5 million by Internazionale. Arriving at the club alongside Galatasaray teammate Okan Buruk, Emre would spend his first season being used almost solely off the bench. The summer of 2002 however was his turning point.

Going to the World Cup in Japan and South Korea as a key part of Turkey’s squad, few predicted what was to unfold. After edging out of Group C ahead of China and Costa Rica, narrow wins over Japan and Senegal put Turkey into the semi-finals for the first time in their history. Considering the nation hadn’t even played in a World Cup since 1954, this was a big deal.

Used mainly on the left of a 4-5-1 Christmas tree by Şenol Güneş, Emre was one of the star performers. He scored in the group stage draw with Costa Rica and played every match as Turkey ultimately secured third place. The diminutive midfielder seemed destined for great things and returned to Italy his exponentially higher.

Having seen what Emre could do, Héctor Cúper sought to use the Turk more in his starting line-up at the San Siro. The results soon came. Emre appeared 37 times across the 2002/03 campaign, winning the Pirata d’Oro award as the club’s player of the year.

It is no overstatement how much of an achievement this was. Inter had reached the semi-finals of the Champions League, losing on away goals to city rivals AC Milan, whilst Emre’s teammates included Christian Vieri, Fabio Cannavaro, and Javier Zanetti.

Unfortunately, this season was to represent the peak of Emre’s time in Italy. The remaining two seasons would be disrupted by injuries, as he lost his place to a combination of Dejan Stanković, Esteban Cambiasso, and Juan Sebastián Verón. In 2005, Emre would receive a Coppa Italia winners medal, however, it had little value as he didn’t partake in either semi-final, let alone the victorious showpiece over Roma.

Out of favour, in the summer of 2005 Emre joined Newcastle United. On only his second league start he endeared himself to the Toon faithful, putting in a man of the match performance in a 3-2 victory over Sunderland. Emre would see his corner headed home by Shola Ameobi to open the scoring before curling in the winning free kick from 25 yards. Things appeared to be promising.

The following season however would be tainted by three separate allegations of racism. The first came on 30 December 2006, in a 1-0 loss against Everton. Toffees defender Joleon Lescott alleged Emre had called his teammate Joseph Yobo “a fucking negro”. Later that same season similar allegations came from Bolton’s El-Hadji Diouf and Al Bangura of Watford. 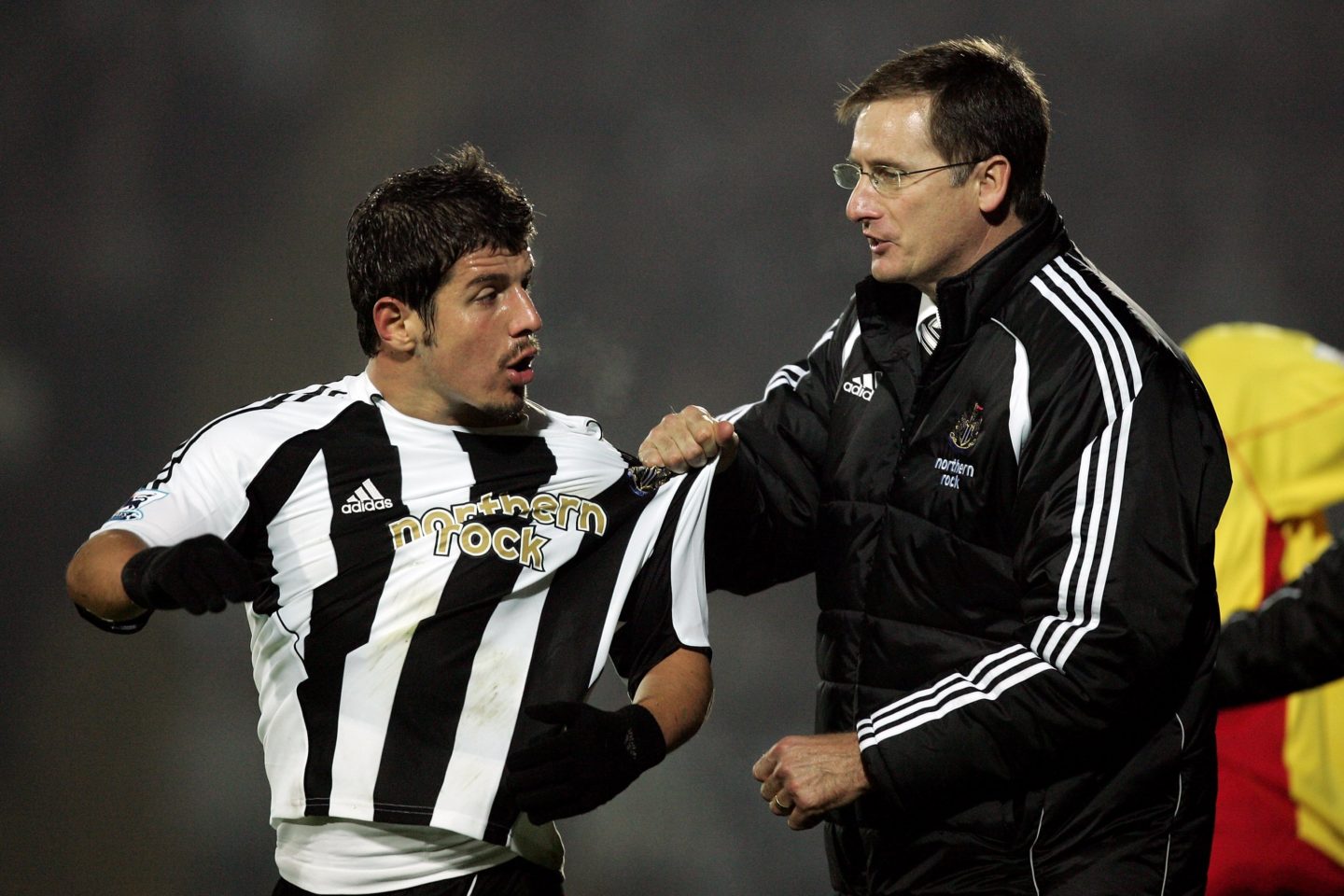 Emre was found not guilty on all three occasions, however their frequency raises severe questions. As the old cliché goes, there’s no smoke without fire. Speaking earlier this year, Emre’s former teammate Kieron Dyer commented, “the more I think about Joleon’s reaction, he wouldn’t go mad for nothing”.

Emre would remain in the north-east for one more season, with even the manner in which the Turk left St. James’ Park proving controversial. Not so much for Newcastle fans, but rather those of old employers Galatasaray. The destination was Istanbul, although the colours of his new kit were yellow and blue. The club was Fenerbahçe.

“I have actually been a Fenerbahçe fan since I was a child. I had posters of (club legends) Aykut Kocaman and Rıdvan Dilmen on my walls,” Emre commented. Rumours abounded of how when at Galatasaray he used to secretly train in Fener shorts. Incensed, Gala fans held protests against their once dearly held prodigy. Emre would add extra oil to the fire by stating how he wanted to score the winner against his old club.

Setting the tone for his first spell with Fener, Emre would do his best to impersonate Sergio Leone with his own rendition of The Good, the Bad and the Ugly. There was the good of winning the Süper Lig player of the season award in 2009/10. Then the bad, with the 2011 Süper Lig title earnt under the cloud of a match fixing scandal. And the ugly, which can be summarised as Didier Zokora.

A one-time change to the end of the Süper Lig season in 2011/12 brought about the prospect of Fenerbahçe having to face Beşiktaş, Galatasaray and Trabzonspor in a championship play-off group. In the first match against Trabzonspor on 15 April 2012, Emre called Zokora “a fucking n*****” right in front of referee Bülent Yıldırım. For this he received a yellow card, and a three-match ban.

This meant Emre was eligible for the return match. On 6th May Fener travelled to the Black Sea, and from the outset it was clear retribution was on the cards. Pre-match Zokora refused to shake Emre’s hand, pulling away behind his back. Into the game and the Ivorian’s teammates, most notably Gustavo Colman, put in several heavy challenges on Emre.

Seemingly intent on revenge, Zokora earnt this by kicking Emre between his legs in a truly horrendous tackle. “He kicked me straight in the balls! Thank Allah I have a child, or I may not have become a father”, Emre said after to Vatan. Sending him flying and leaving him riling on the floor in agony, one could argue it was the justice deserved. 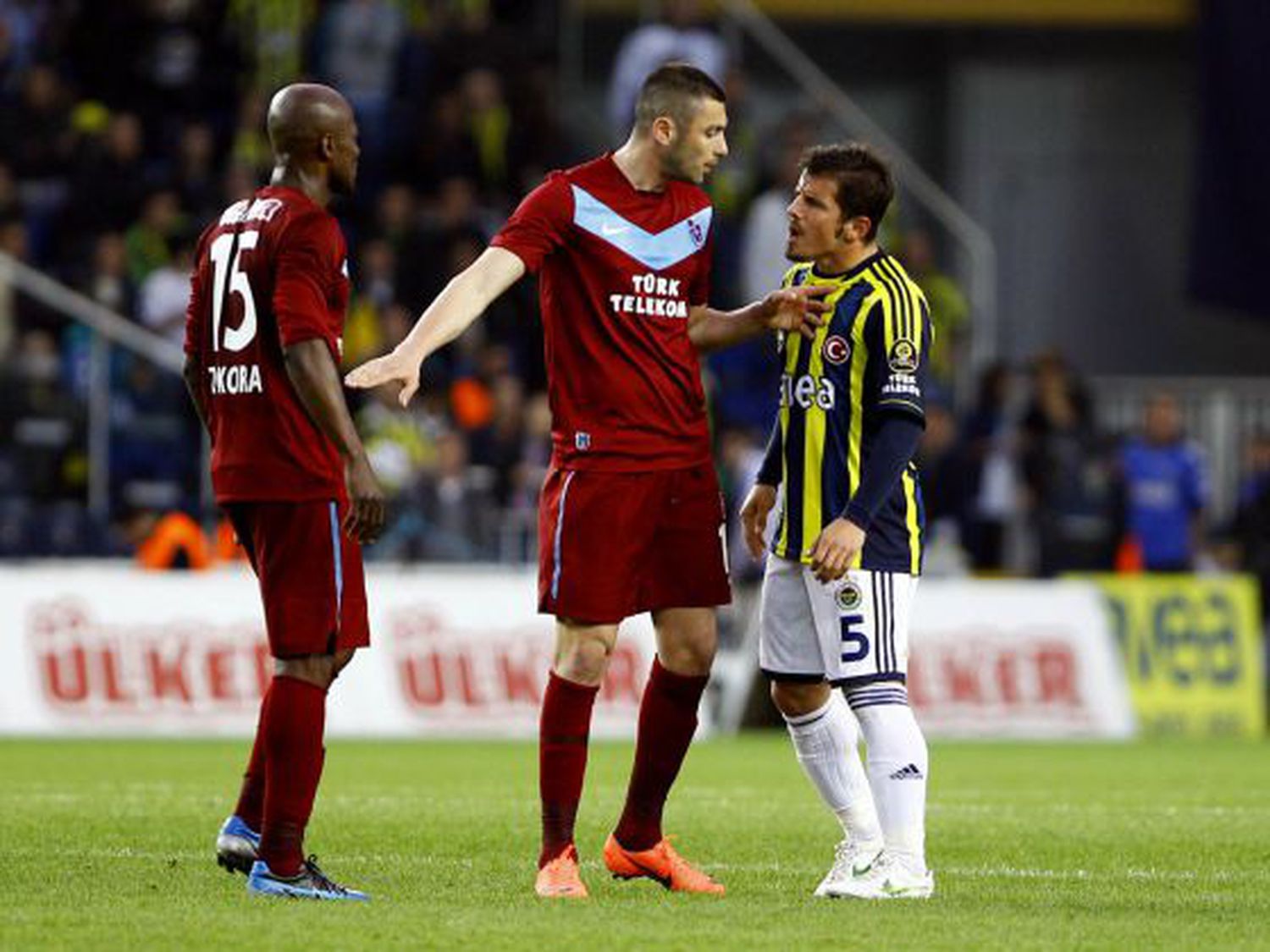 Fresh from such a devastating scandal, Emre left Turkey in 2012 to sign for Atlético Madrid alongside Arda Turan. He would taste success in the UEFA Super Cup again, coming on for Radamel Falcao during the dying minutes of a 4-1 win over Chelsea. Emre would however only last six months at the Vicente Calderón, returning to Fener in time to lift the 2013 Türkiye Kupası. Further success would follow in the 2013/14 Süper Lig.

As captain of his boyhood club Emre was very much living the dream, although this came crashing down in the summer of 2015. Incensed by his release, he briefly considered retirement before joining Istanbul Başakşehir on a free transfer.

Despite entering his twentieth season as a professional footballer, Emre showed no signs of slowing down. In four seasons at Başakşehir, Emre was twice awarded a place in the Süper Lig team of the season, helping his club finish Süper Lig runners-up on two occasions. He also earnt a recall to the Turkish national team at the age of 38, to bring his cap total up to 101.

Not that age did anything to calm down the temperament of a player who across his career was sent off fourteen times. In a clash with Erzurumspor in September 2018 Emre cursed opposition fans in the stands before attempting to fight them, having to be escorted from the ground by security forces.

After persistent rumours during his time with Başakşehir that he was due for a third spell at Şükrü Saracoğlu, Emre finally returned to Fenerbahçe in the summer of 2019. He did little to help the club as they finished a disastrous 7th. Announcing his retirement last month, what mattered was that it was at his club. “What a great honour to play in your shirt. I am leaving a dream and a love”.

Concluding a 24-year career to become the club’s new sporting director, it should have been a cause for celebration. Except it wasn’t. Former Fener assistant coach İsmail Kartal once summed up the footballer well. “Emre’s quality is hard to find in a player. He is a player with great leadership qualities, with self-confidence.”

There is no questioning this. Worthy of a place in the FIFA 100? In retrospect probably not. Without a doubt though, Emre is one of the best players Turkey has ever produced. Were it not for all the extra baggage we would be talking about one of Turkey’s most successful too. It’s just as well his final game came in an empty stadium.