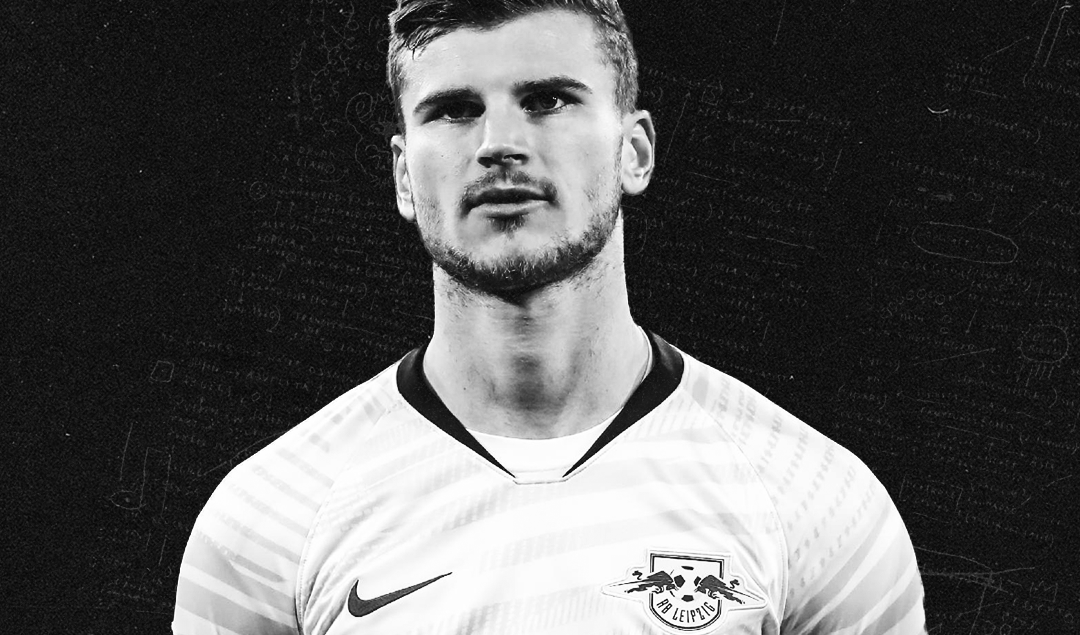 Timo Werner joined RB Leipzig in the summer of 2016 from VfB Stuttgart, leaving his boyhood club for €10 million, the biggest transfer fee in Leipzig history at the time. He fit the profile of Red Bull’s squad perfectly, boasting great athletic qualities paired with a dynamic skill set. All in all, it was a match made in heaven.

As Leipzig flew up the league standings, so did Werner’s value. On his arrival to the club, he was valued at $8.801 million; now as the club’s all-time leading goal scorer at 24 years old, he’s now worth a staggering $88 million. With young manager Julian Nagelsmann at the helm, Werner has gone from strength to strength. He has played a part in 28 goals in 26 matches, while proving to be a fundamental piece of a refined system.

In this analysis, we will dive into his role in RB Leipzig’s 3-2-5 system, Werner’s incredible understanding of player’s movements around him, how he contributes throughout the thirds, and his efficiency inside the opposition box. 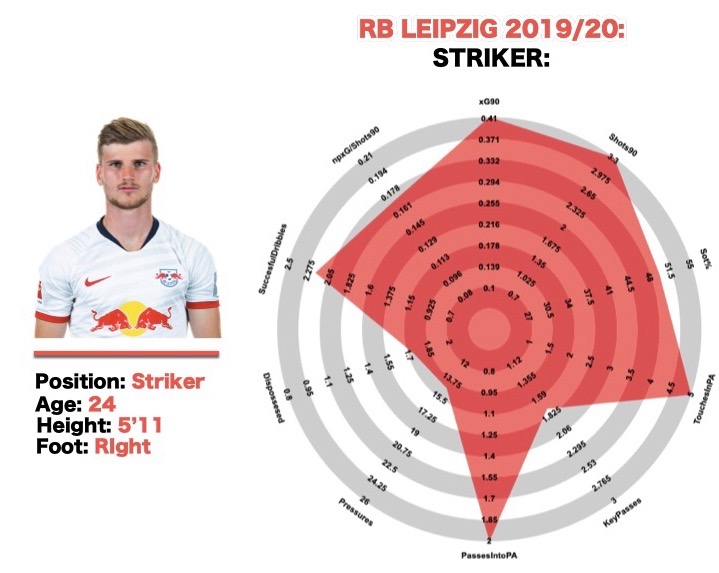 In Nagelsmann’s Leipzig, Werner is expected to contribute to build-up play inside the middle third just as much if not more than in the opposition penalty area. Being deployed on the left side of a five-man attack, he interchanges positions and makes decoy movements, using his understanding of movement to create space, influence passing sequences, and defy defenders.

On the left side of the pitch, the team forms a diamond shape that includes Werner, the left-sided midfielder, the left-back and left center back. They make rotational movements between themselves to create space and manipulate the positioning of the opposition defenders.

Here, Christopher Nkunku drops into the left half-space, Werner then moves into the vacant space, and Marcel Halstenberg is allowed to freely push forward into space and provide width going forward. 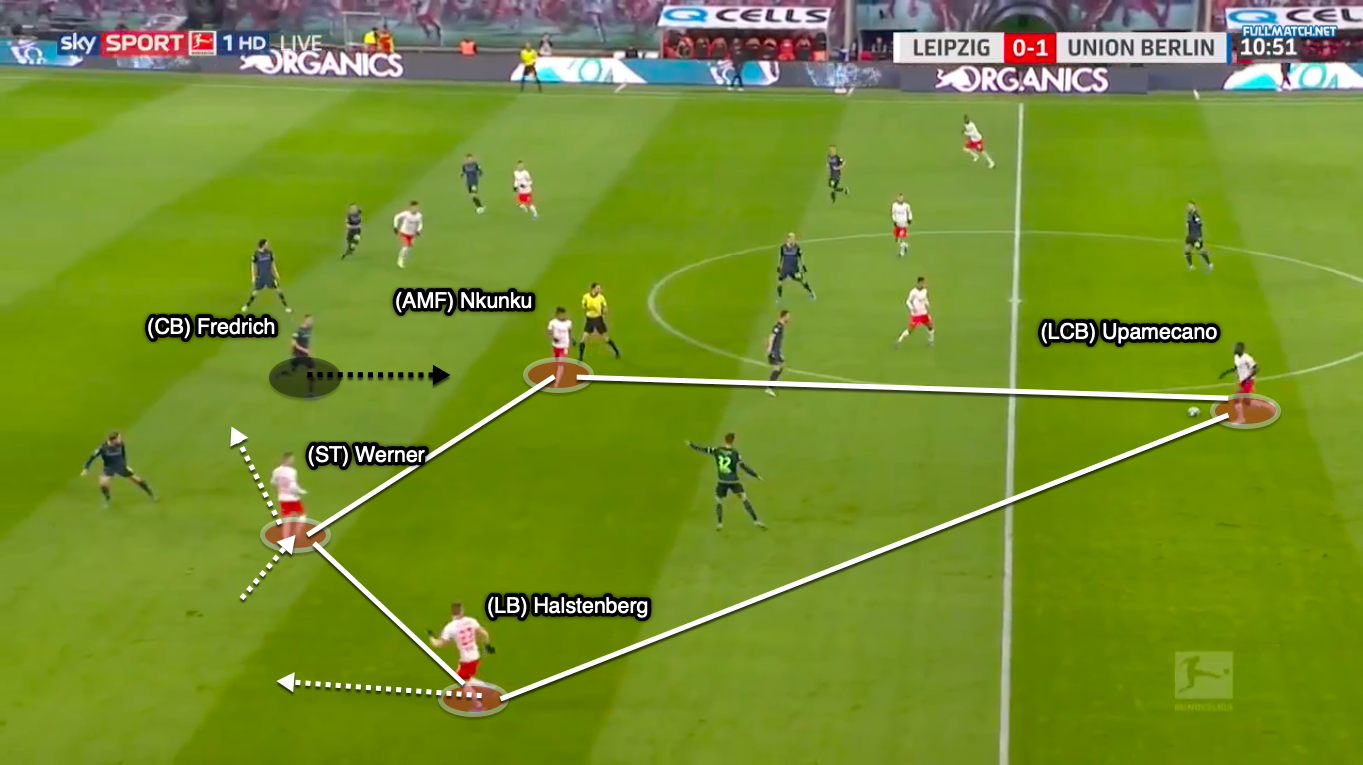 When Werner is tasked with manipulating the interior left channel, he looks to receive a pass or make a movement that creates space for another player to receive. Here he uses a decoy movement to drag the Mainz player out of position to open up a new passing angle for Marcel Sabitzer. 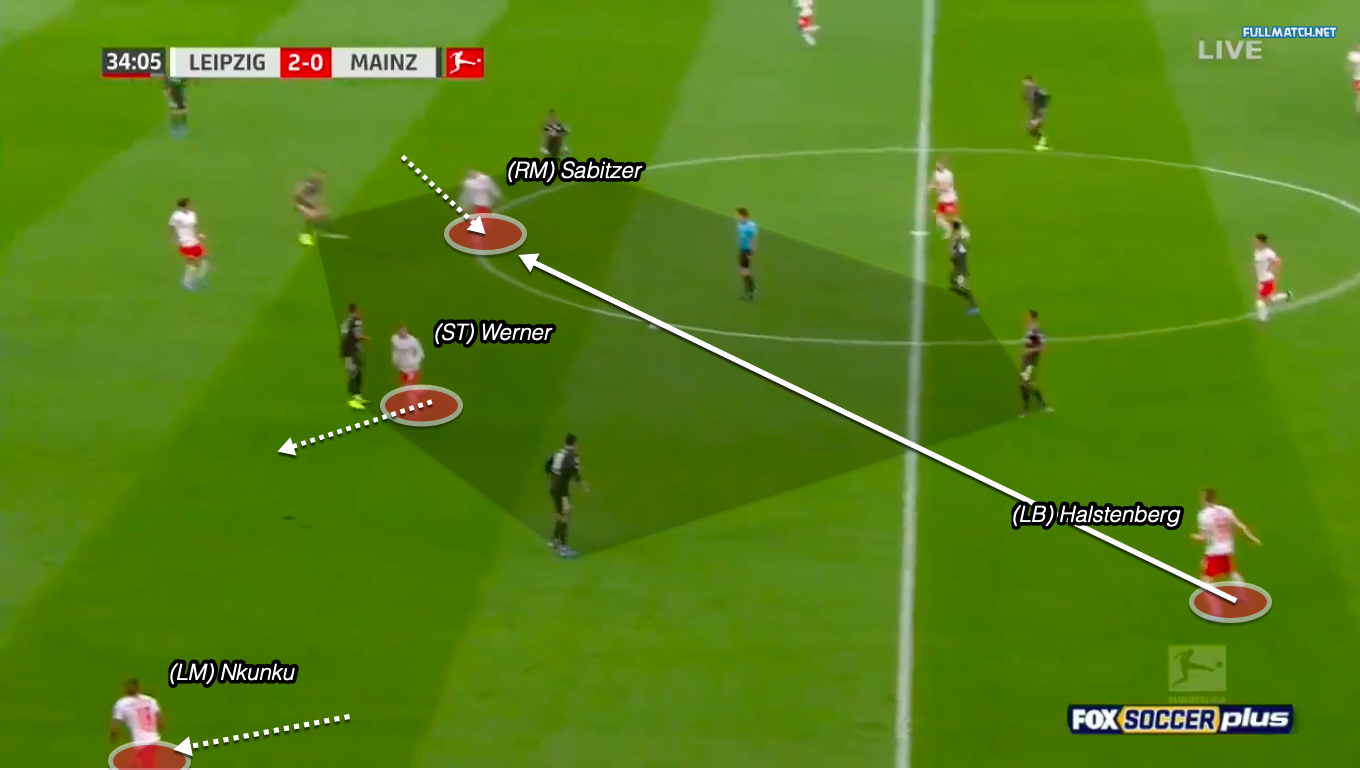 Providing an Outlet to Escape Pressure

While Leipzig look to play out of their defensive third, Werner will drop into a pocket of space, creating a passing option into the middle third. By acting as an outlet past the opposition lines of pressure, he can drag defenders out of position and open up space for his teammates to progress the ball forward.

Against Mainz, Tyler Adams drops into the defensive line to create a back three, attracting Mainz attacking midfielder Jean-Paul Boëtius to press him. Werner recognizes the space opened up and drops into the right half-space to create a passing option for Leipzig goalkeeper Péter Gulácsi to escape the 3v3 in Mainz’s first line of pressure. 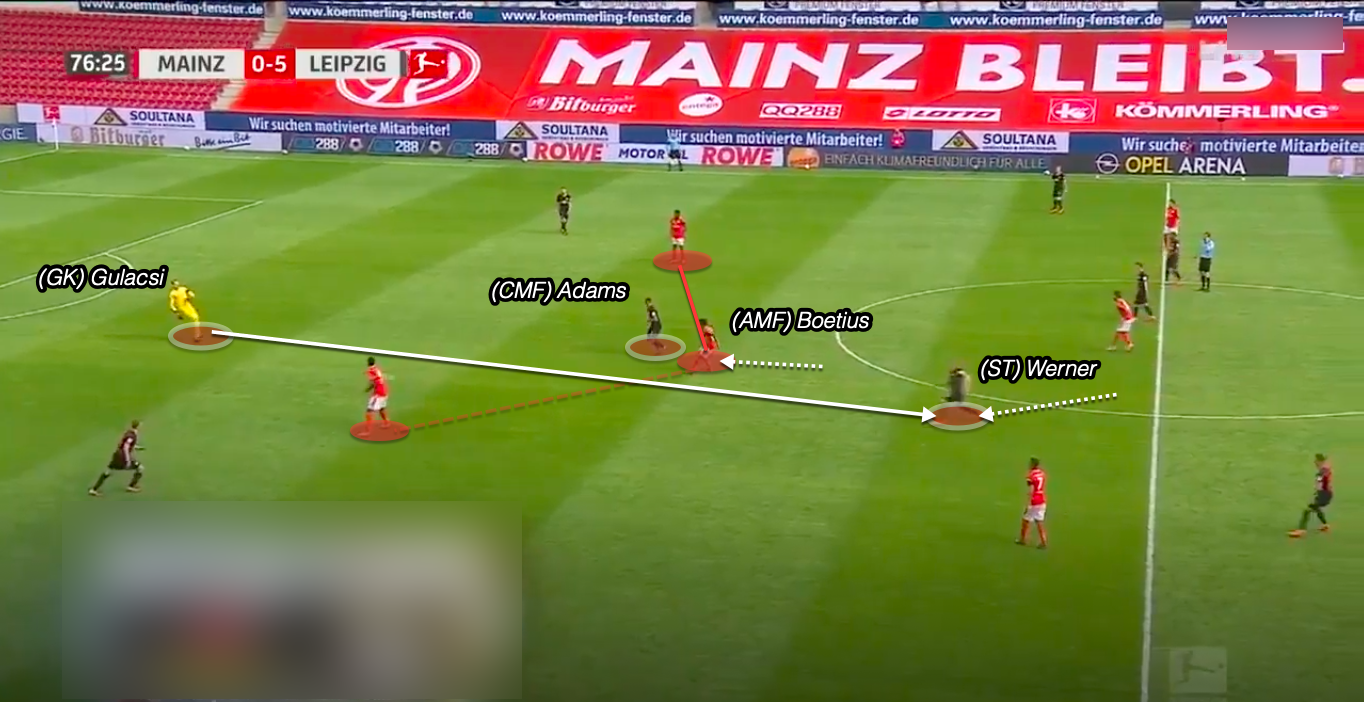 In playing through their defensive third, Leipzig find themselves in a 3v3 situation in the left-sided zones, and Werner recognizes the opportunity to help them play through Cologne’s press. Dropping into the left flank, he now gives Leipzig a 4v3 overload in a diamond pattern, positioning himself at the top of the diamond as a free passing option to play through the first two lines of pressure. 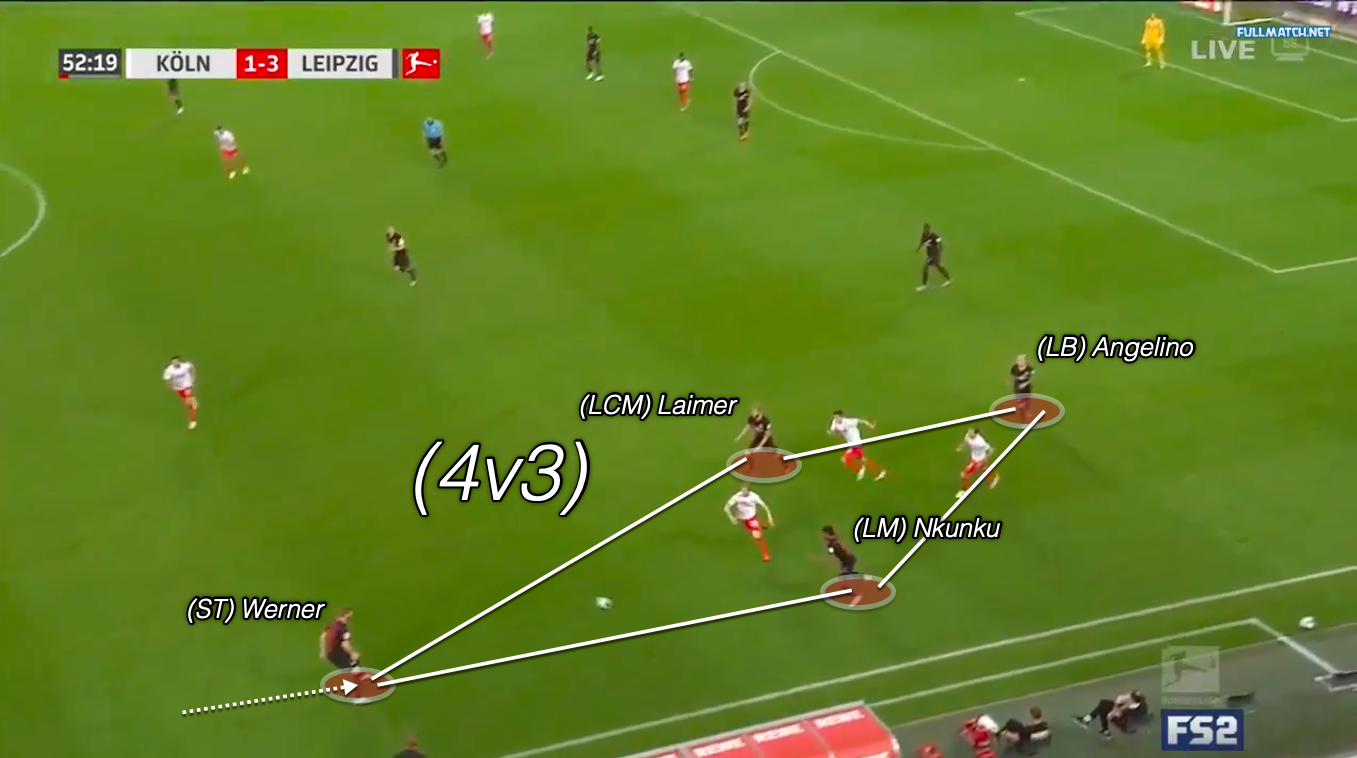 Efficiency in the Final Third

Apart from scoring the 2nd most goals in Germany this season behind Robert Lewandowski, Werner also boasts the 2nd highest non-penalty expected goals (npxG) in the league, behind Bayern’s #9. His acceleration and sprint speed make him a dangerous outlet against teams attempting to play a high line, and with the likes of Sabitzer and Emil Forsberg around him, one incisive pass can send him through on goal, where he can then use his athletic qualities to round the goalkeeper and put the ball in the back of the net.

As seen below in his 2019/20 shot map, Werner excels at finding space inside the box, with a preference for the left flank. He tends to overhit his shots from tight angles, but this is certainly one aspect of his game that he can improve on as he enters his prime. 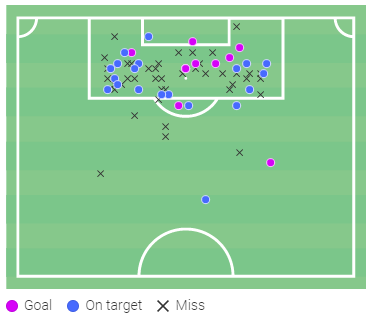 In Nagelsmann’s 3-2-5 possession shape, Werner is always positioned toward the left side of the pitch in what can best be described as an inverted forward. From a deeper and wider starting position, he can survey the situation inside the box, search for the blindside of defenders, and ghost into the box without a marker. These qualities are especially effective against a narrow and compact defensive opposition.

When inside, Werner looks to make the difference by getting onto the end of pullbacks and low crosses, making runs towards the back post where he can find himself in high xG opportunities.

Similar to Mohamed Salah, Werner is not a particularly tricky dribbler, but he uses his pace to find himself in dangerous, isolated situations.

Cutting inside onto his strong foot, he can then shoot or sprint towards the byline to make pullbacks for his team mates. Furthermore, he can also look for an overlapping or underlapping player, which usually comes in the form of the closest attacking midfielder or full-back. 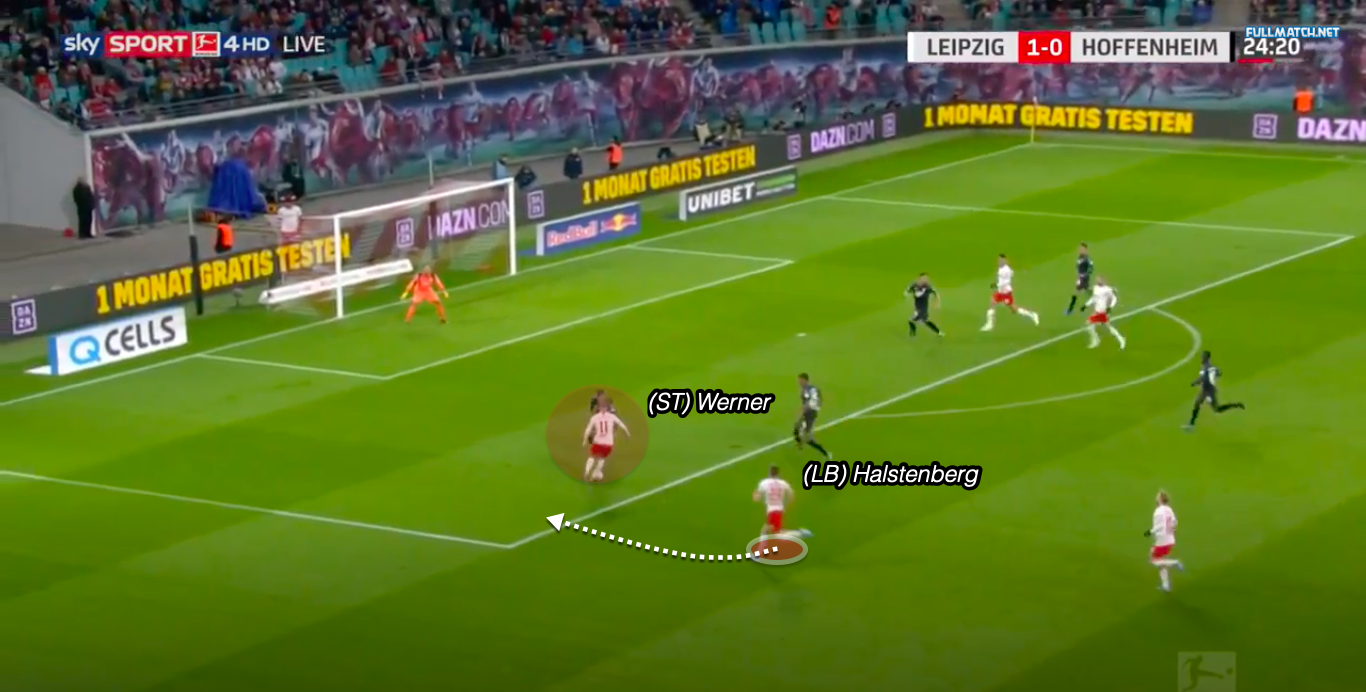 Interplay Between the Lines

Werner’s understanding of movement and space paired with his great technical quality makes for fantastic interplay with his teammates. He doesn’t like to receive the ball with his back to goal; instead, his striker partner (Patrick Schick and Youssef Poulsen) can bring him into play between the lines by being a focal point between the lines themselves in their target men roles. Werner will find then himself in a perfect position to receive a pass and then make a quick first-time pass in a tight space.

Leipzig tends to create an overload against the opposition back four when deploying their attacking five. In the victory against Mainz, Poulsen receives with his back to goal and plays a first time pass to Werner. Werner latches onto the pass and puts himself into an ideal position to play a perfectly weighted through ball to Sabitzer inside the box. 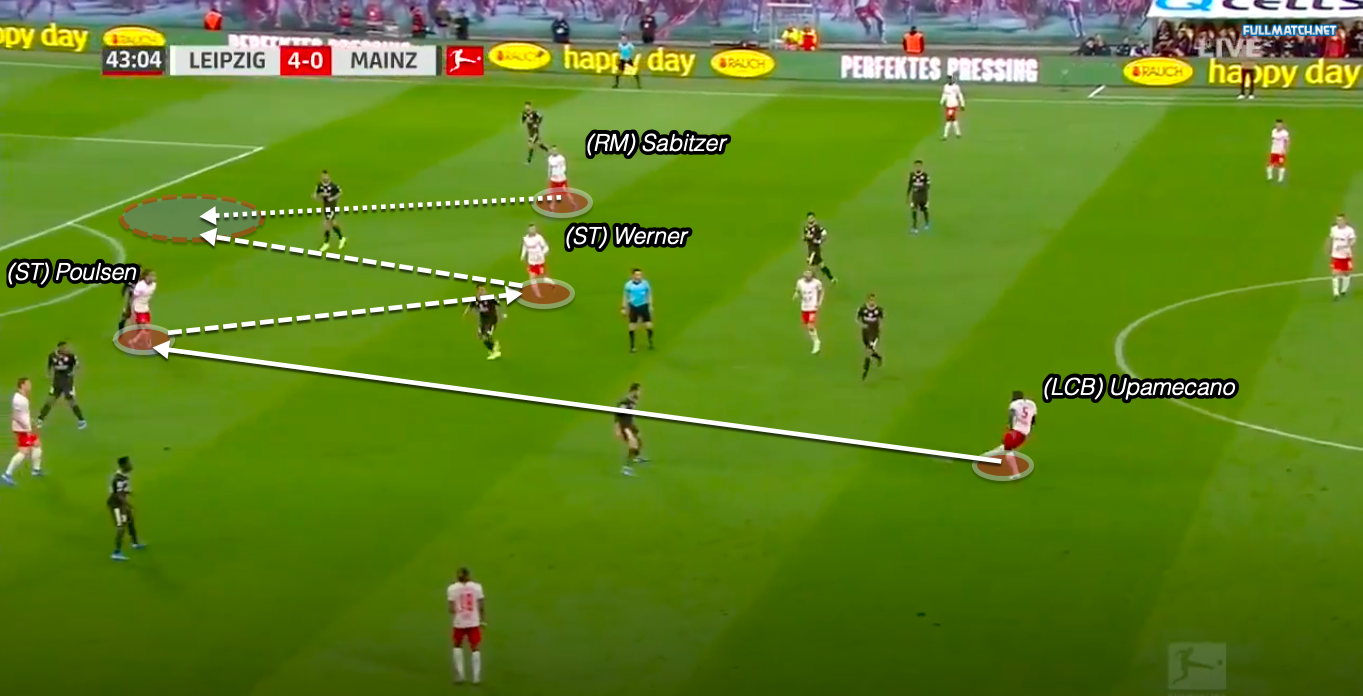 Both Leipzig and Werner have come a long way since the Stuttgart native joined for a club record fee nearly four years ago. Leipzig have gone from Bundesliga debutants to Champions League contenders, whereas Werner has gone from a scrawny youngster to one of the most dangerous forwards in Europe. Whilst their partnership looks almost certain to end this summer, as a bevy of European giants look set to trigger his €60 million release clause, it was a match made in heaven while it lasted.