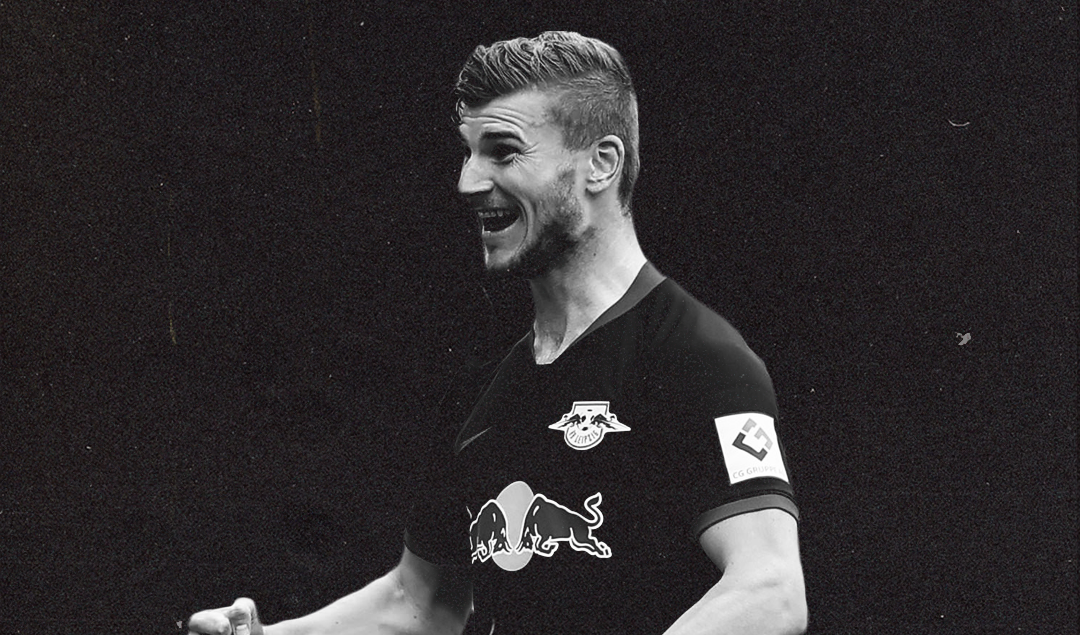 After going winless in three games, RB Leipzig took on relegation-threatened Mainz on Matchday 27 in a must-win game to keep their title hopes alive. After Dortmund and Bayern put on convincing displays a day before in their wins against Wolfsburg and Eintracht Frankfurt, the pressure was on Leipzig to deliver. They did it in quite a dashing fashion, dismantling Mainz with a 5-0 victory.

Mainz started in a 3-4-3 formation which changed to a 5-4-1 out of possession, whilst Leipzig changed their shape from last match by switching from 3-4-3 to a 4-4-2/4-2-3-1 formation, with the likes of Marcel Sabitzer, Dayot Upamecano and Dani Olmo coming into the side.

Leipzig started in a 4-4-2 shape, but their players were given the flexibility to roam around as opposed to being given a rigid position. Timo Werner constantly dropped deep, making the shape look like a 4-2-3-1. He was joined by Christophe Nkunku and Olmo, who would drift inside from their respective flanks.

Konrad Laimer, the right full-back, would position himself high and wide on the right, whereas the left back Marcel Halstenberg was narrow in his positioning and was given the flexibility to roam around (more on his role later). Kevin Kampl and Sabitzer dictated the flow of possession from the midfield double pivot.

As I mentioned in my previous tactical piece (Leipzig vs Freiburg), Julian Nagelsmann puts a heavy emphasis on fast vertical progression and playing through the central corridors. But due to Mainz’s 5-4-1 shape with wingers tucked in, Leipzig found it difficult to directly play through the central zones. Instead, they created ‘wide overloads’ on the right flank with the motive of dragging Mainz’s midfield line and then exploiting the gaps created in central zones, or switching play to the opposite flank. 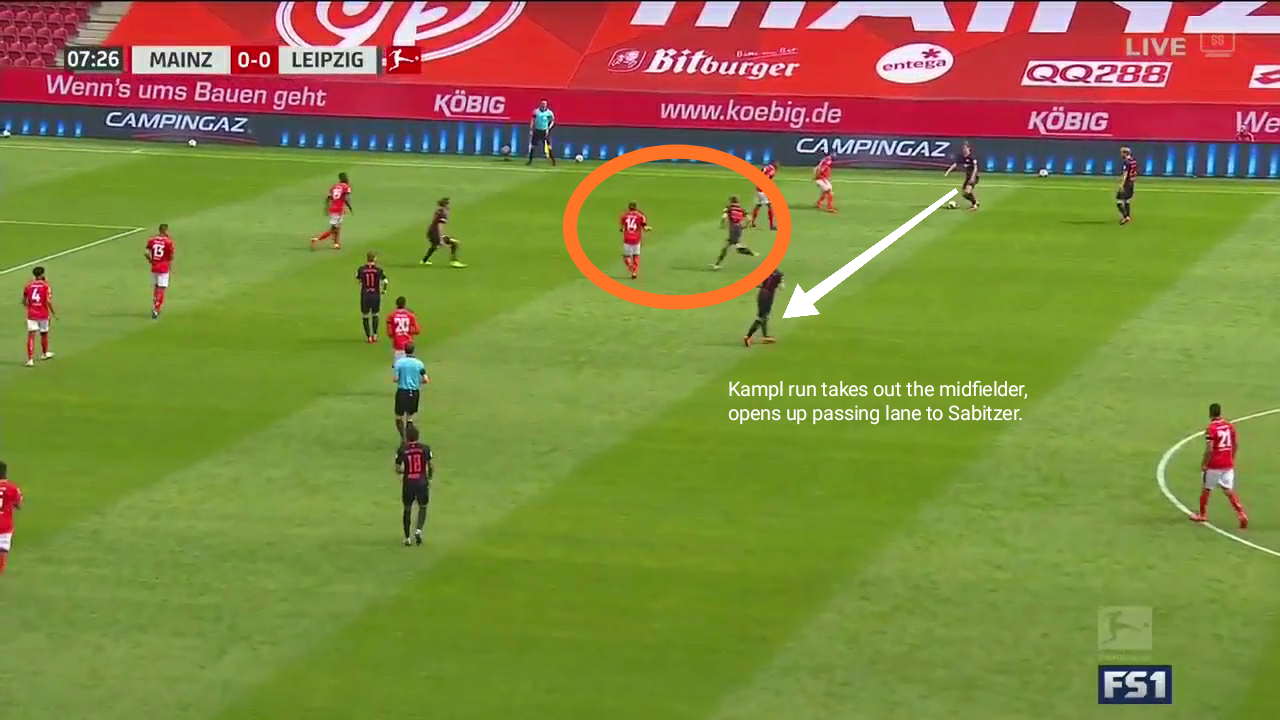 Sabitzer then switches play to the left flank to Halstenberg. 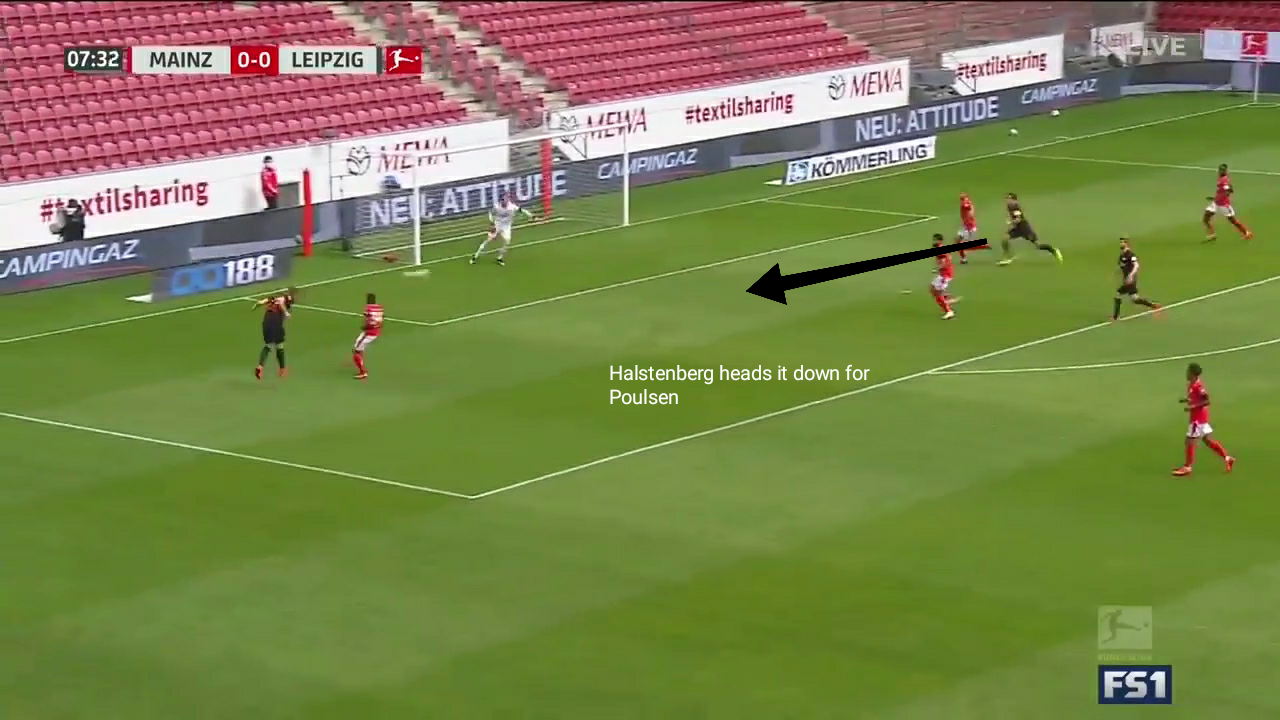 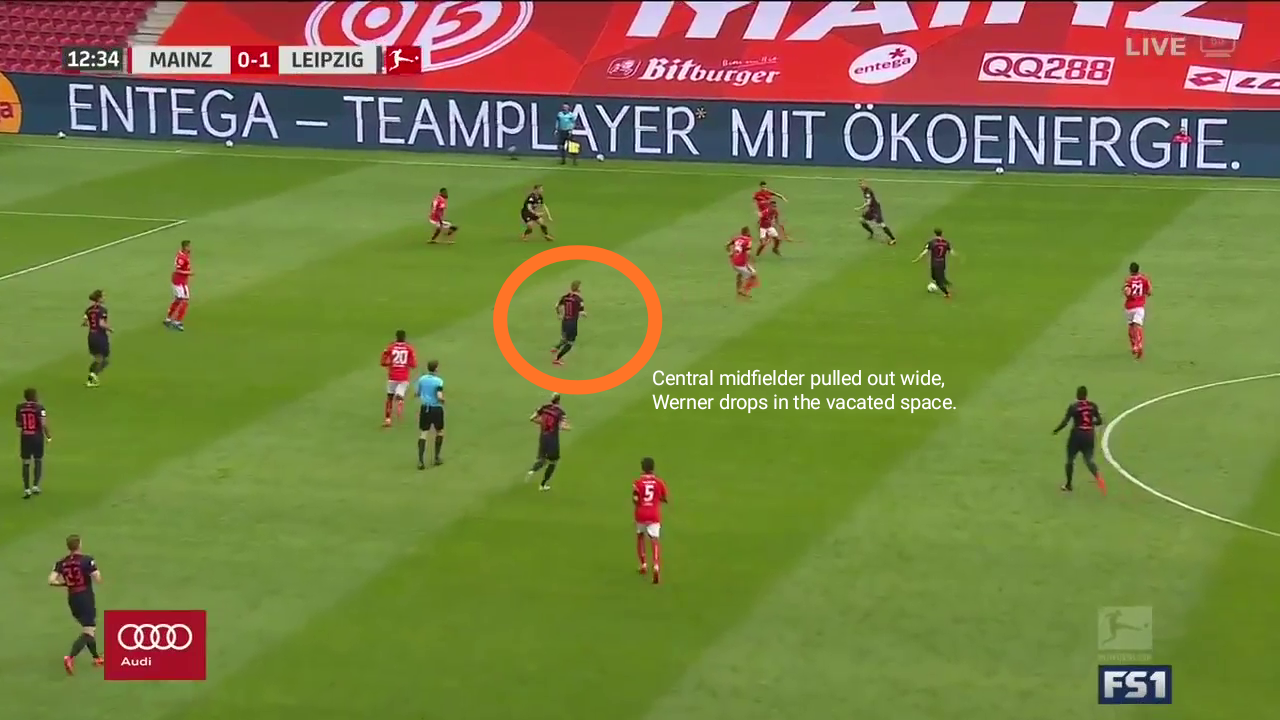 Werner receives the ball in acres of space and plays a beautiful through ball for Olmo, who almost scores. 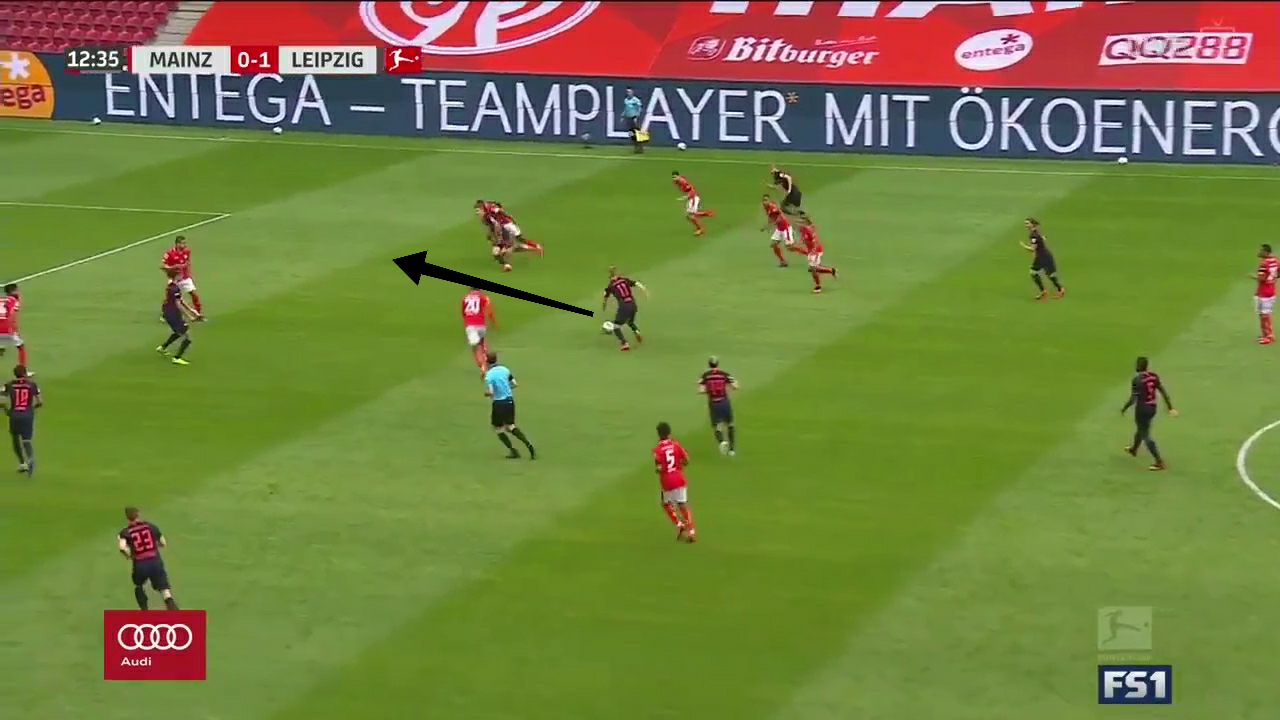 The use of wide overloads, decoy runs, and constant rotations helped Leipzig to create space, and led to their first two goals.

For the first goal, Laimer receives the ball on the right flank and attracts two Mainz players. Olmo makes a supporting run in the half-space which attracts the left-sided centre back, Moussa Niakhaté. Werner makes a late run to the far post, exploiting the gap left by Niakhaté, and puts the ball past Florian Müller to make it 1-0. 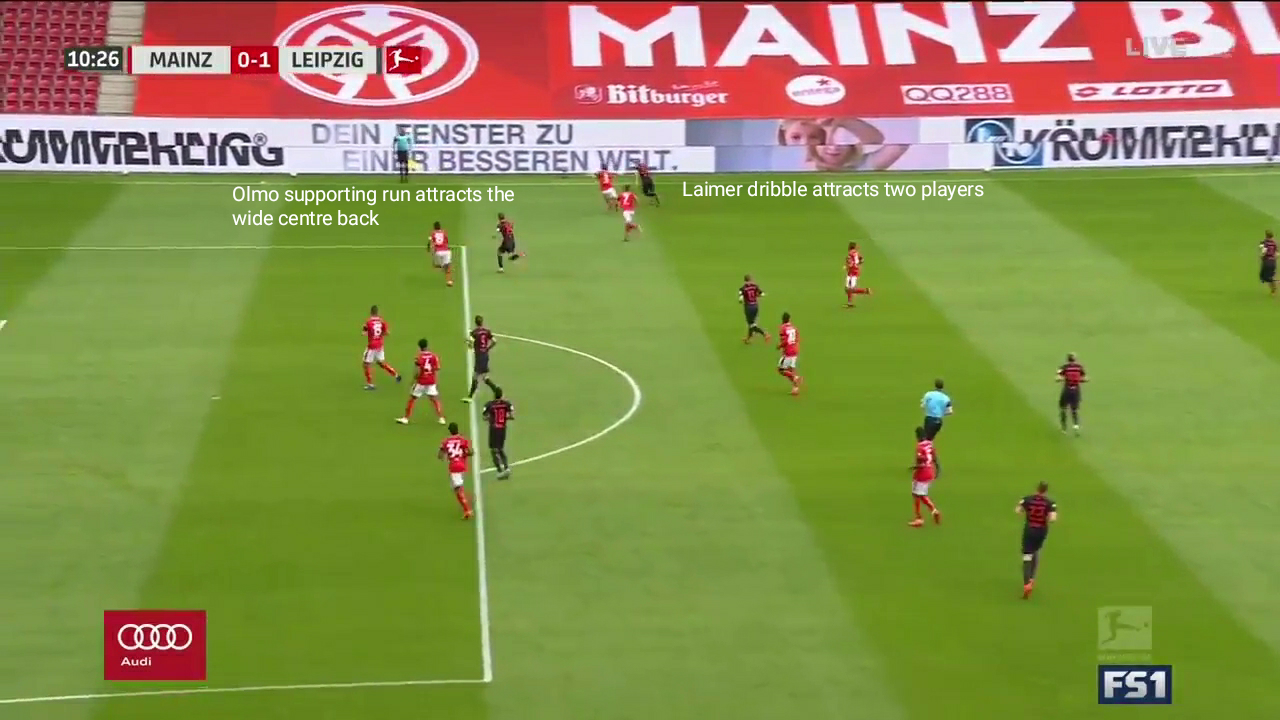 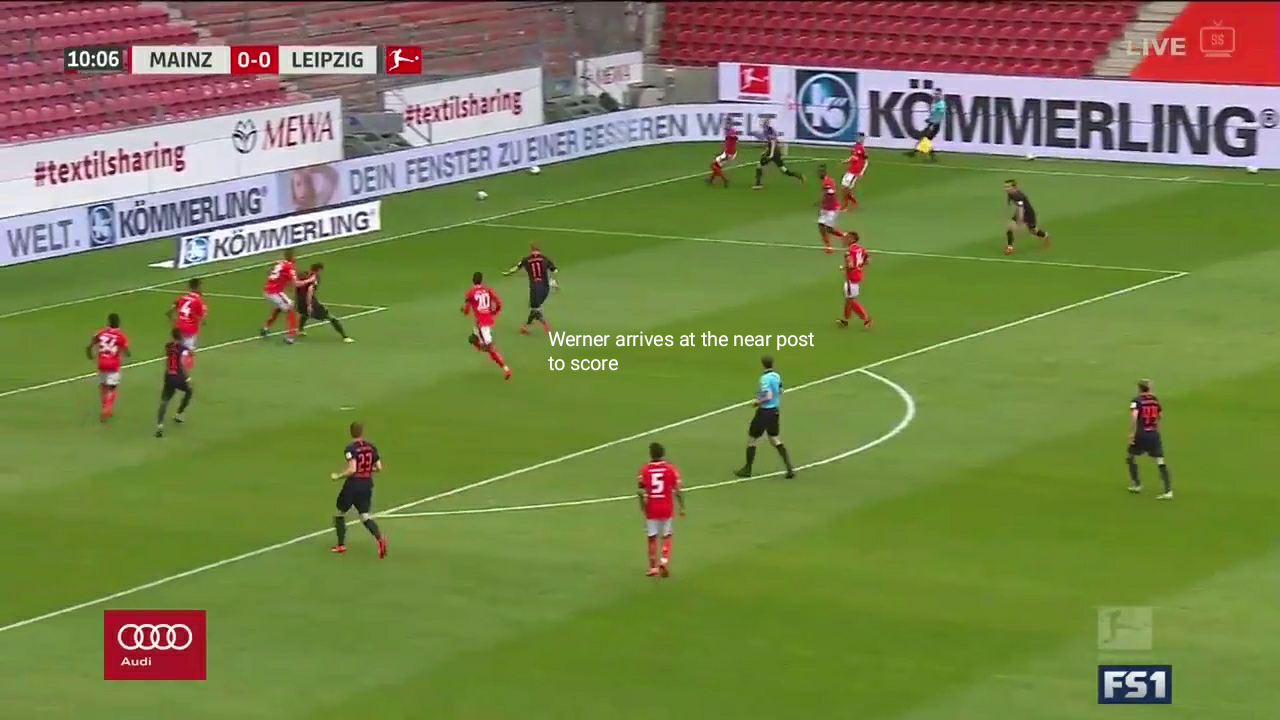 For the second goal, Sabitzer makes an underlapping run on the right and puts a lovely cross in for Yussuf Poulsen, who heads it and scores. 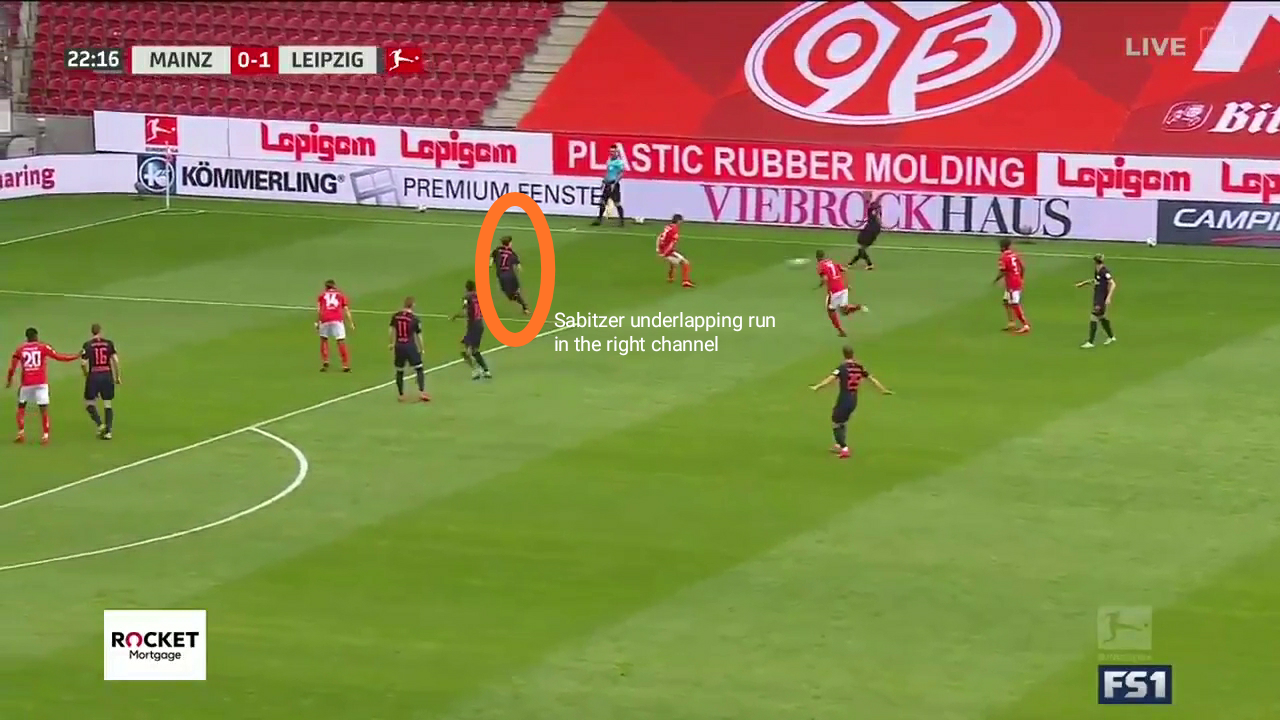 Leipzig deployed a high press to prevent Mainz from playing out from the back, but their pressing structure was completely different from their game against Freiburg, in which they protected the central passing lanes and forced the ball out wide before they began their press. Against Mainz, they chose to cut off the wide passing lane to the wingback and encouraged the ball to be played into the centre, where they had set up their pressing traps. 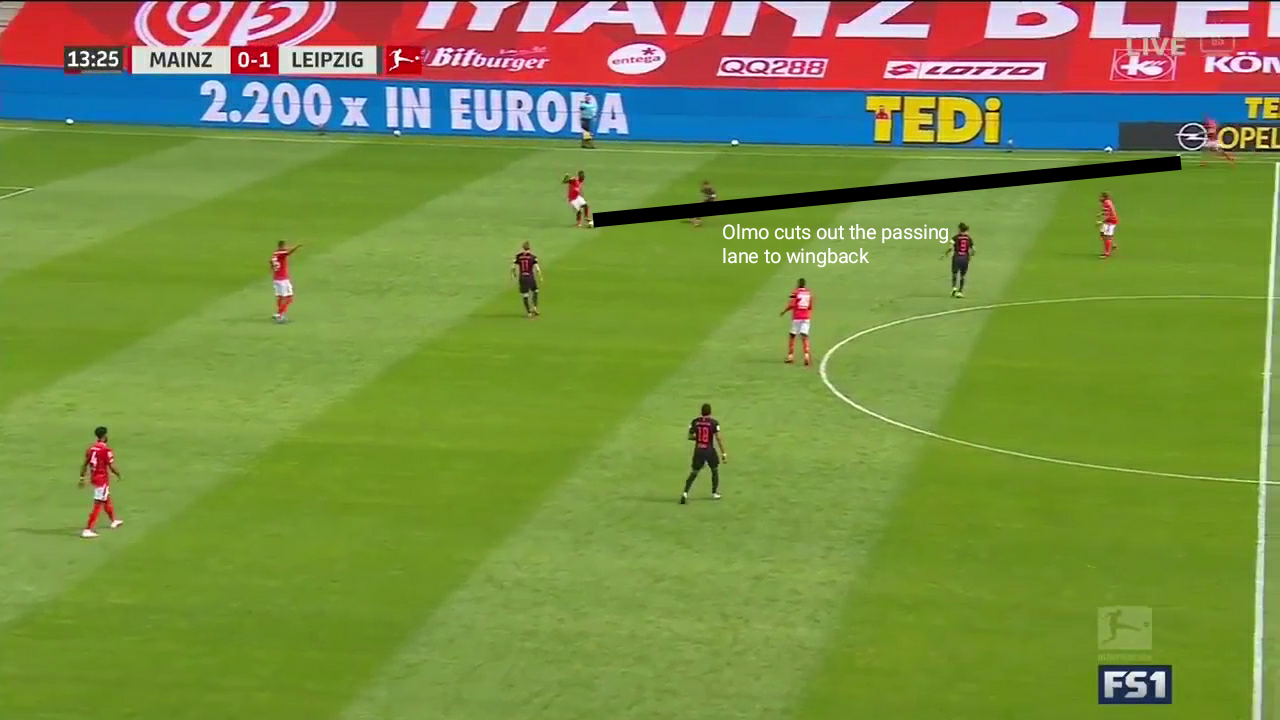 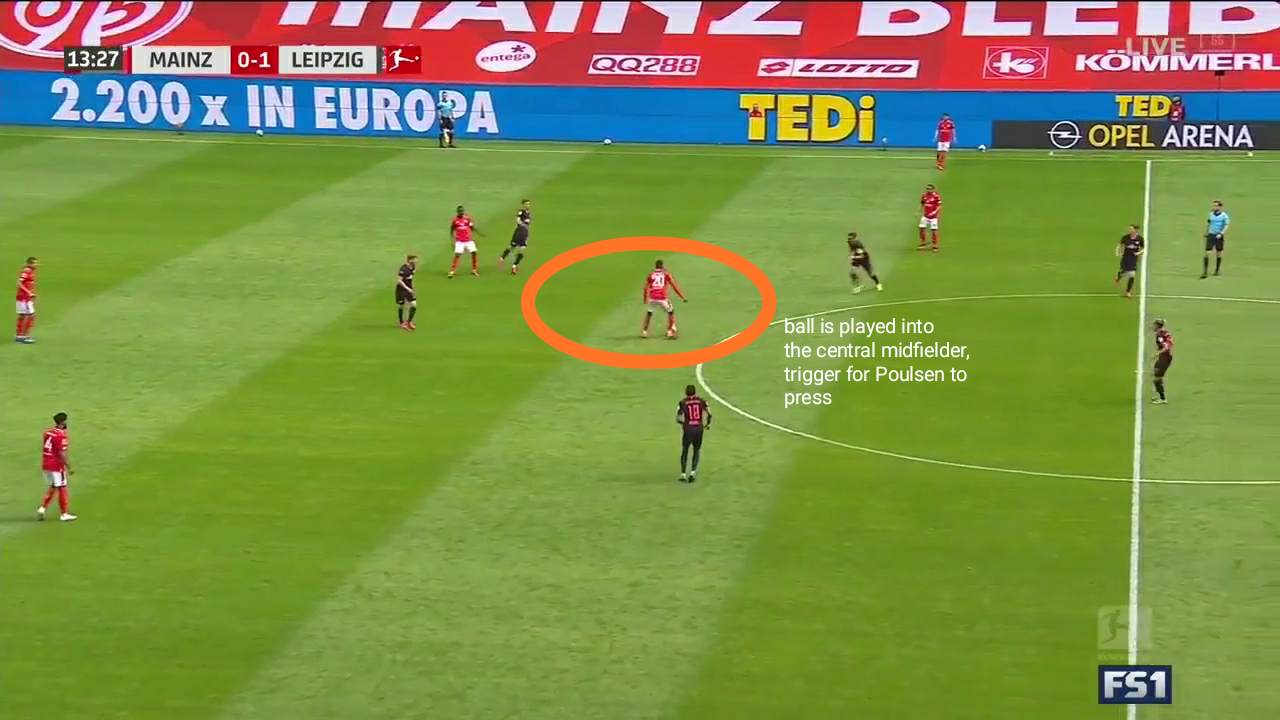 This type of pressing is deployed by Jürgen Klopp’s Liverpool, where they set up pressing traps for the opponent to play into the centre of the pitch and once the ball is played, they start to press. This allows them to win the ball central areas of the pitch, enabling a quick and vertical transition with the opposition completely out of shape. It is one of the most efficient ways of creating chances, one of the reasons why Klopp labelled this kind of pressing as a ‘playmaker’.

Leipzig’s third goal was a prime example of their pressing acting as a ‘playmaker’. Theyset up their pressing trap encouraging Mainz to play into the centre, and once the pass is played, Sabitzer steps up and dispossesses Fernandes, who was positioned poorly to receive the pass. 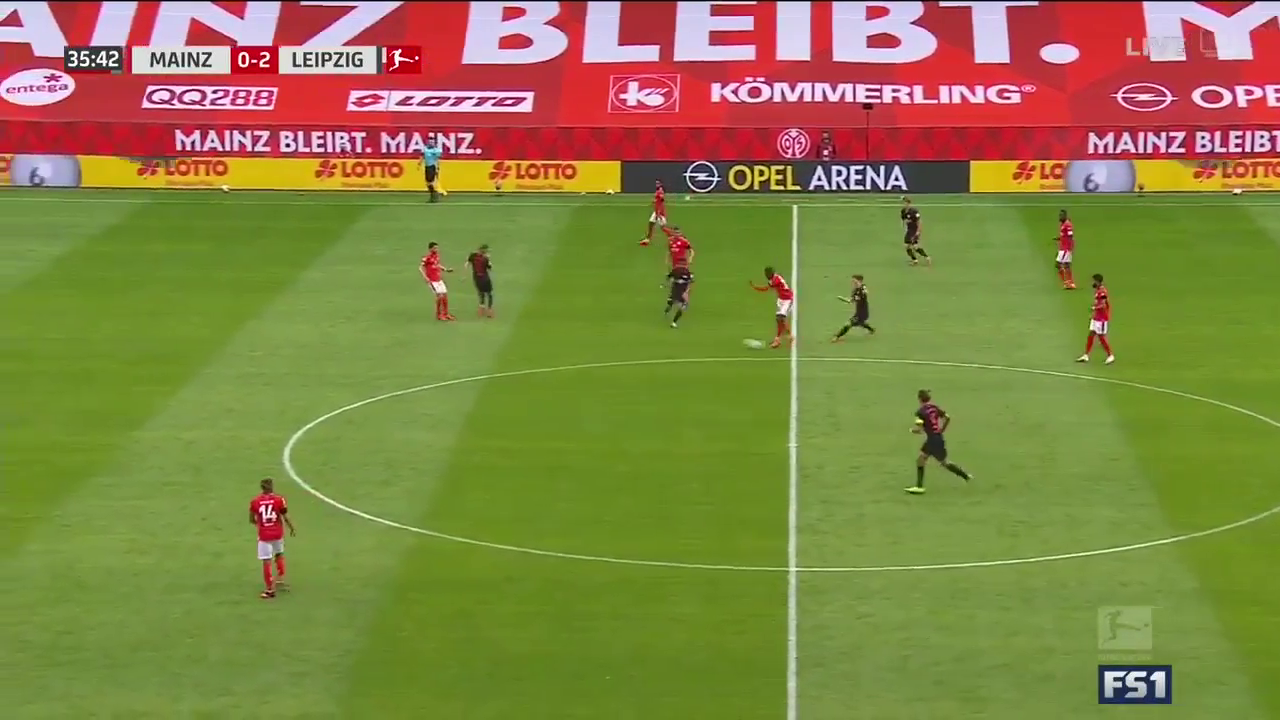 Mainz are then in a completely dismantled shape, whereas Sabitzer has four passing options to choose from. He plays the ball into Poulsen, but the passage of play eventually ends up with Sabitzer scoring himself. 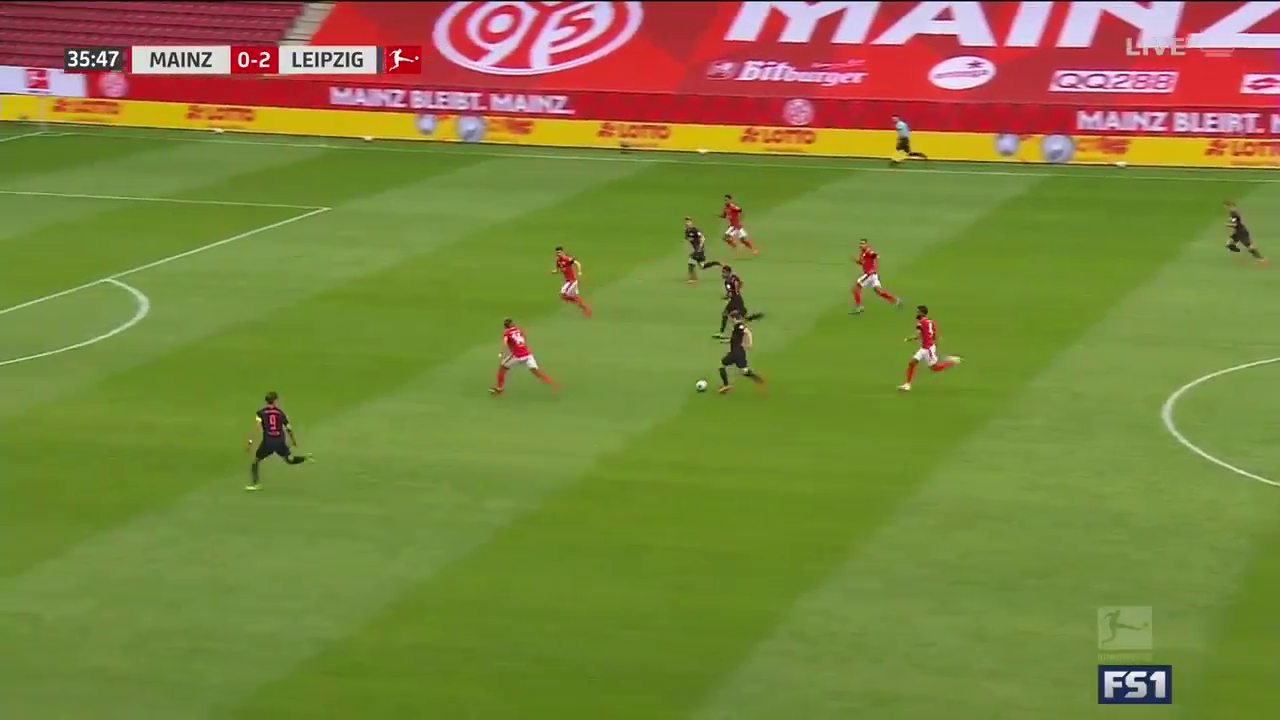 The first half ended with Leipzig comfortably leading 3-0. In the second half, Mainz changed their formation from 3-4-3 to 4-4-2 and tried to play more expansively, but this played into Leipzig’s hand as it afforded more space to the likes of Werner, Nkunku and Poulsen.

Mainz also deployed a man-oriented high press in the second half, which in turn allowed Leipzig to drag Mainz players out of position, leaving huge spaces to be exploited. 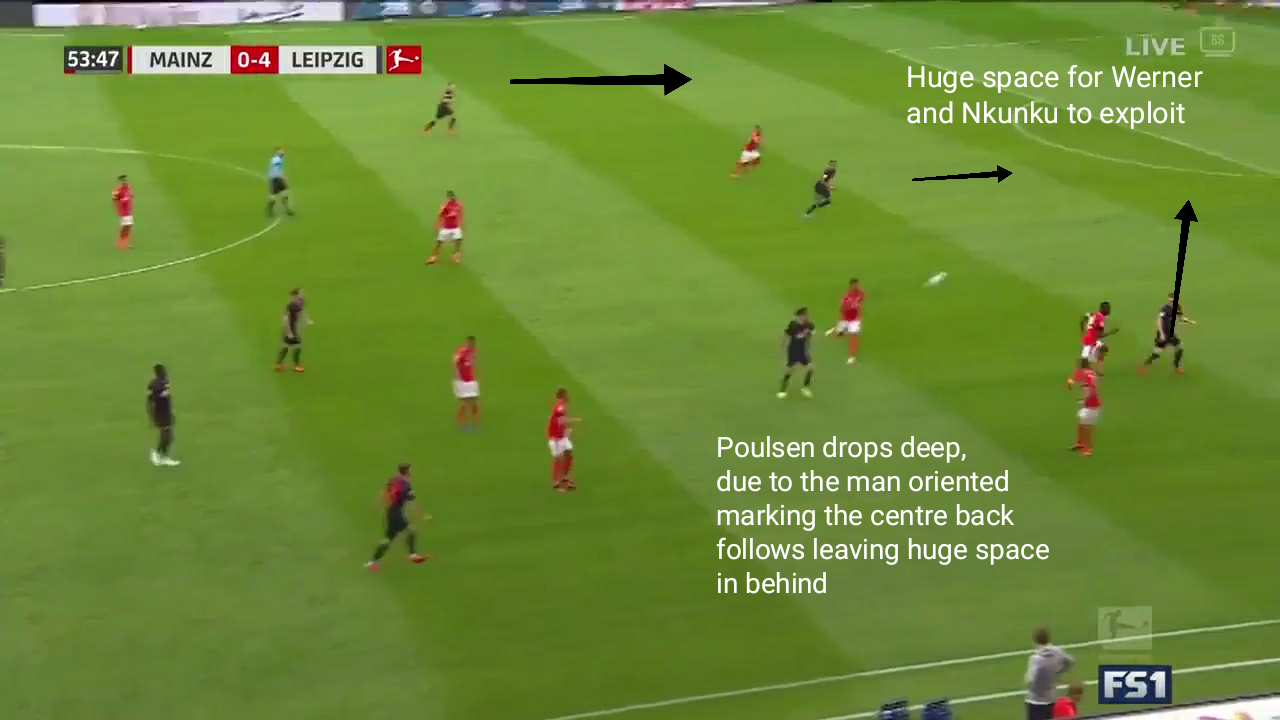 Leipzig comfortably won the match 5-0 at the end, and they were unlucky not to score more. The result puts Leipzig seven points adrift of league leaders, Bayern Munich whereas Mainz are just three points of relegation and are in a dire need of picking more points.