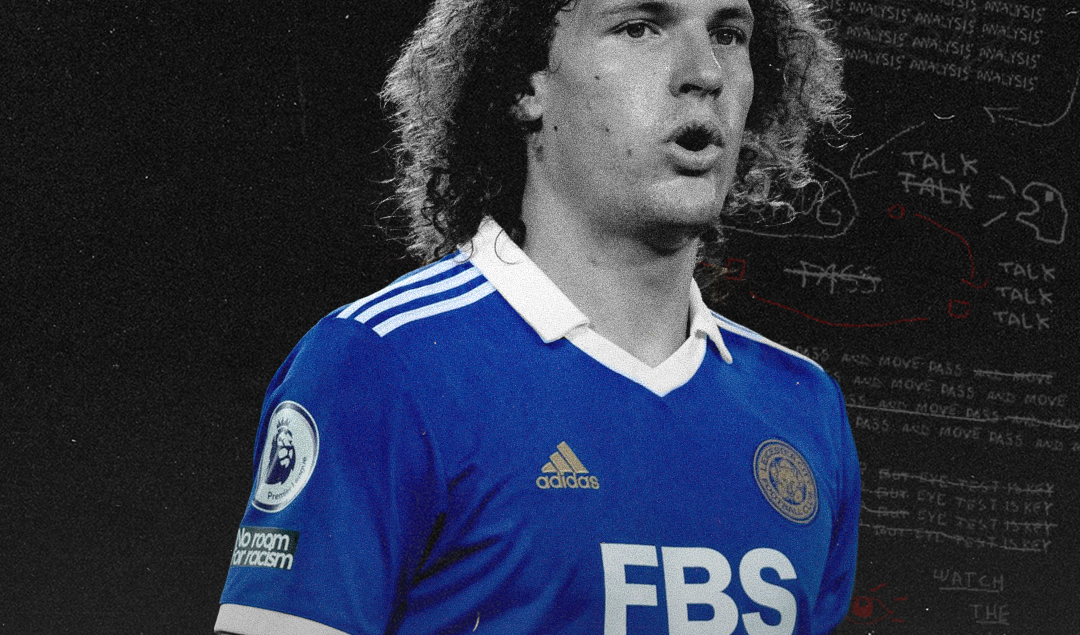 It might not seem an opportune time after the last two results, but Leicester City are a team on the up. On a run of seven wins in their last 12, it’s been a marked improvement in defence that’s been the catalyst for The Foxes’ recent success. At the centre of this transformation? Wout Faes.

Leicester’s single marquee signing in the summer, can’t help but accept the David Luiz comparisons he so despises. Aside from the trademark curly hair, Faes’s aggressive front-foot style of play is much akin to Luiz. The two calamitous own goals against Liverpool only really add to the caricature, though not in the way I intended. That said his comfortability on the ball marries technicality and physicality just as Luiz did during his near-five-year spell in England.

A tall and imposing figure, Faes uses his strength to push attackers around. He thrives against forwards who play with their back to goal, tending to engage the ball rather than dropping off – averaging 2.5 tackles per 90. Faes’ height (1.87m) also allows him to dominate the ball aerially, an advantage for a Leicester side who have just the 16th tallest squad in the league yet contest the sixth most aerial duels.

The 24-year-old only made his debut towards the end of September, a damning 6-2 loss to Tottenham. But despite what the score line might suggest, Leicester showed they could still match up with the league’s best before a late Heung-min Son salvo took the game away from them. These small signs of improvement would prove to be seismic, though, as Faes’s ascension to the first team coincided with the run of form that’s seen them rise from the foot of the table to 13th in just 11 games.

Whilst James Maddison rightly took in the plaudits and landed himself a spot on the plane to the World Cup, it was Faes, who had masterminded a run of seven clean sheets over this period, whose performances were most deserving of a call-up, one which he received from his native Belgium, despite being capped just once. This was perhaps the crowning glory of his short career, and it’s one he credited to Leicester and manager Brendan Rodgers.

“I haven’t played a lot in the national team. My transfer and performances in the league have made the difference,” he said to the Leicester Mercury.

Faes’s passing range is varied, and he is similarly comfortable playing out of defence – he averages 73 passes per 90, at a success rate of 85.9%, as he is playing direct and looking for runners in behind. A by-product of his time in Belgium, his tactical flexibility in possession allows Leicester to adapt in real time.

The young center back has added an assertiveness to a Leicester side who were going through the motions. With Wesley Fofana having left for Chelsea and Youri Tielemans seemingly out the door this summer, there’s been little reason for Leicester fans to look forward to the future. But now, with Faes at the back, Leicester can begin to build towards a new era under Rodgers.