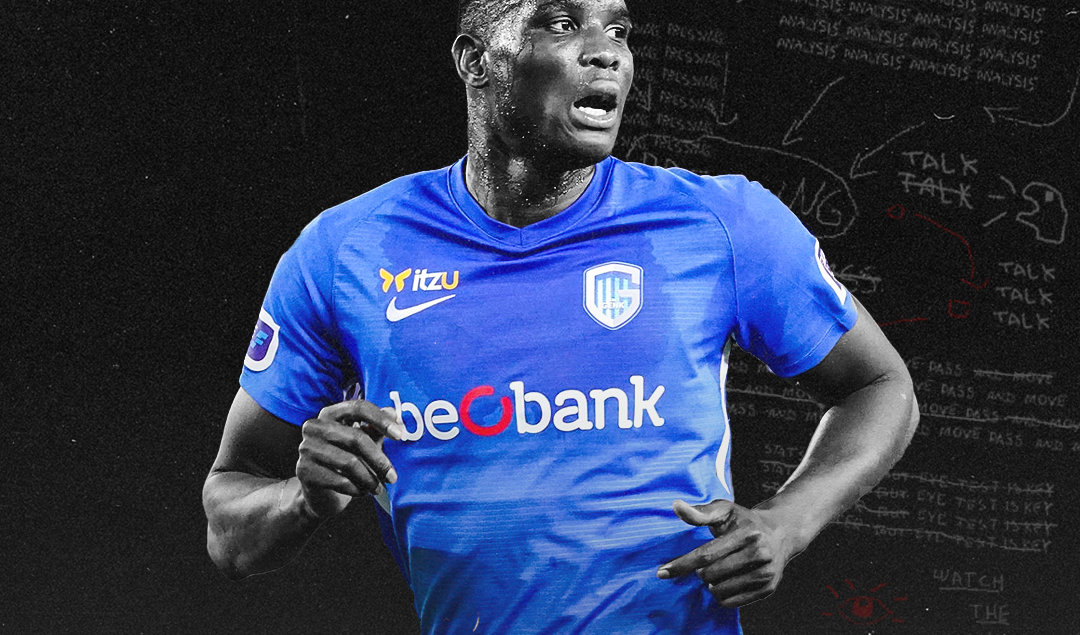 In 2012, Paul Onuachu’s life changed. Just like the biblical version, his was slightly different, with the 6ft 7in forward securing a transfer that took him from third division Nigerian club to the Danish Super League. Born in Owerri, Imo State, South East Nigeria. He arrived the world at a time Iwuanyanwu Nationale, now Heartland, of Imo had dominated club football on the local scene.

He wasn’t short of idols growing up, and while the team were no longer the force they once were, Onuachu had seen and heard enough of the heroes past to know the reputation he had to live up to. Not least that of Kanu Nwankwo, another lanky forward as himself from Imo State, who etched his name in Nigeria folklore. Onuachu had an interesting love affair with football and it would take him to Ijeubu-Ode, Ogun State where he joined FC Ebedei, a third-division Nigerian side with well-documented history.

Ebedei was a good stomping ground, with Obafemi Martins, Femi Ajilore and Akeem Agbetu all having come through the ranks hitherto. A football club run by Churchill Oliseh, a brother of former Nigeria coach, Sunday Oliseh, Ebedei had struck up a partnership with Midjtylland in the early 2000s and ended up as a feeder academy to the Danish club owned by Moneyball guru, Matthew Benham.

The partnership has been on for 18 years, and 27 players have seen their careers given a shot at glory. Frank Onyeka, is the latest success story of the line, but Paul Onuachu and Femi Ajilore, are pioneers of clear success patterns that culminated in national team call-ups. However, that journey could have been different for Onuachu in 2012, where had he not finished as third-highest scorer in the Nigerian second division, and awarded a Danish scholarship, he perhaps may have learned a trade or be in the corporate offices shaking hands to business deals.

An attacking midfielder for Young Stars Academy in Lagos, Nigeria, Onuachu’s growth spurt meant he could not quite function effectively in a playmaking role despite possessing maximal skills to boot, throwing his future as a footballer in doubt. However, a willingness to learn and sound coaching saw him evolve into the striker discovered by FC Ebedei. A self-proclaimed Gunner, it is not hard to see why the feeling he evokes is that of Kanu Nwankwo even if their styles offer somewhat of a contrast.

Onuachu is one inch shorter than Peter Crouch, and just like the robotic man, he is adept at hold-up play and laying off the ball, and has an eye for a pass, perhaps a feature of his early days in the sport. In contrast to the belief that he is slow, Onuachu possesses rapid bursts of speed, albeit better timed these days so as to conserve energy as he arrives in the penalty box.

After all, running 4x100m in secondary school isn’t the same as the sheer top speed on the ball or acceleration relatively. Onuachu is a menace in the air, and it accounts for a high volume of his goals, his finishing with the leg is equally crisp and finessed and whether with his left or right foot, he will bury them. It reflected when he arrived at Midtjylland joining their youth teams where he was a scoring menace.

He finished as the club’s top scorer, earning him promotion to the first team in the 2012/13 season hitherto where he made one appearance. He’d make 21 appearances across the next two seasons scoring once before heading on loan to Vejle Boldklub. It would be at Vejle that Onuachu would show signs of what was to come, bagging 5 goals and 1 assist in 13 appearances in the second tier, all coming in the last six games of the season. It propelled them to a fifth-place finish and Onuachu would return to Midtjylland with a chip on his shoulder.

He’d announce himself properly in 2015/16 in the Europa League against Manchester United, netting a 77th-minute winner to send Midtjylland fans into raptures as they took a Europa League Round of 32 first-leg lead, one they would eventually relinquish, but Onuachu’s right-footed shot had done its job, and he’d soon be the cynosure of all eyes.

A 23-goal haul would follow in 2016/17, particularly finding joy in the big games against Nordsjaelland, Copenhagen and Brøndby. His goals against Nordsjaelland and Brøndby were the full complement, showing his versatility and range with goals from left foot, right foot and his head. It wasn’t a coincidence that in 2017/18, when Midtjylland would win their second league title, Onuachu would play a key part alongside Alexander Sørloth.

Alexander Sørloth: King of the North

He netted four goals in the preliminary rounds of the Europa League as the Danish outfit crashed out in the fourth round of qualifying, missing the crucial ties with Apollon Limassol. It would serve as sufficient fuel to motivate him in the League and his ten goals would help in the title conversation. 21 goals later, Genk were convinced to part with €6 million to sign him. It has proved one heck of a bargain.

Onuachu’s gradual adaptability once again proved but a mild disruption. He’d take seven games to find his feet but once the floodgates opened, he’d proceed to score ten goals. 2019 was that year for Onuachu, as he also made his Super Eagles debut, netting the fastest goal by a Nigerian inside 10 seconds in a friendly victory against Egypt.

It would earn him a roster spot in the 2019 Africa Cup of Nations, and while he hasn’t hit the heights of that first game since, Nigerians still wait for his eruption. The perception that a player who has netted 37 goals in 2 seasons for Genk in Belgium cannot play in the national team is been questioned daily by the media. In fact, in those two seasons, (2019-21), Onuachu’s proficiency is only under threat by Simy Nwankwo (35 goals), another outcast in the national team.

That Gernot Rohr, once so excited about these men gave up so easily on their suitability to his team is puzzling at best. Onuachu and Simy are no slouches on the ground. There is a case from a school of thought that Onuachu’s goals are mainly penalties and headers but this is quite debatable. Only 15 of his goals have been penalties or headers which makes up for under 50%.

Onuachu may yet thrive on crosses but his deployment at Genk is more inclined to using his bursts of speed in the right areas as he makes late runs into the box to get on the end of crosses from Junya Ito or Theo Bongonda. He spends nearly all of his time in the opponent’s half, and even more specifically within the opponent’s area.

In fact, all of his goals since 19/20 have been from within the penalty box; with only eight of these actually being from the penalty spot. For 2020/21, He is top of the charts in the Belgian league for non-penalty goals per 90 according to Fbref but is 9th overall for goals per Shot. Intriguingly, he ranks first for shots on target total, but 8th for total shots attempted. An indication that he would only shoot when he is sure. A fox in the box? Without a doubt.

According to Belgianfootballanalysis.com, Onuachu averages the highest number of offensive duels per 90 minutes out of all players in the Pro League, averaging 22.5 offensive duels per 90 minutes and receives, on average, 3.21 long passes per 90 minutes. It is critical to his team’s style of play, as he helps bring Theo Bongonda and Junya Ito into play, both men equally devastating in front of goal. Onuachu is equally solid in the dribble. He is averaging a successful dribble every other game and for a big man, it’s not bad.

He is already been linked with a move to Lyon, and it’s obvious to see why. Rudi Garcia enjoys having big men. Moussa Sow and Moussa Dembélé have thrived under his tutelage and it won’t be surprising if Onuachu does arrive to complement Lyon’s wingers. One thing is sure, while Rohr figures out where he’d fit in with the Nigerian national team, his club coaches already have a template that is statistically proven that works. Over to you Rohr.